The Prince says he finds it hard to come to terms with the behaviour of paparazzi who took pictures as his mother lay injured. To mark the 20th anniversary of her death, Prince Harry and his brother Prince William have spoken more openly than ever before about the events surrounding the car crash. Prince Harry has criticised the paparazzi for taking pictures of his mother dying in a car instead of trying to help her following the crash in Paris 20 years ago. 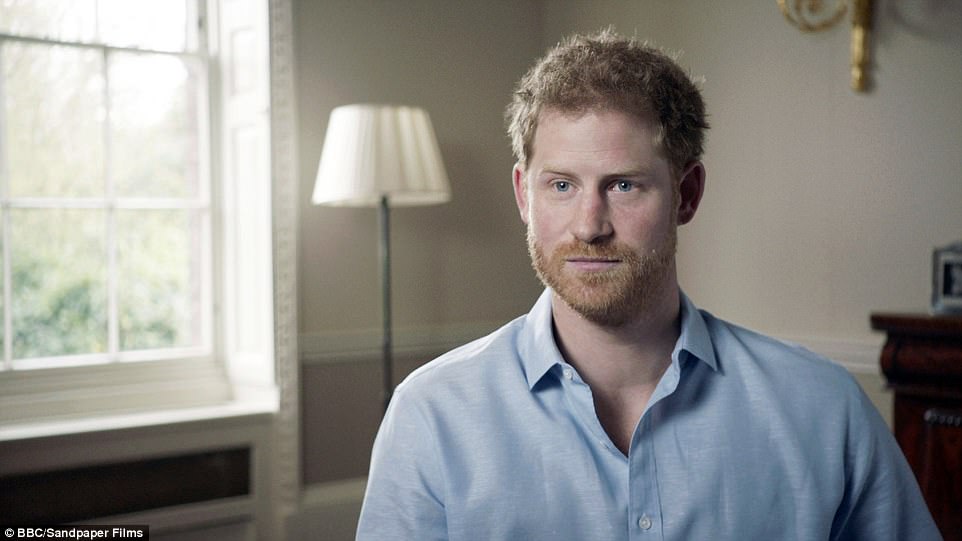 Harry had previously said walking behind her coffin aged 12 was something no child “should be asked to do”. He has now told the BBC he doesn’t “have an opinion whether that was right or wrong”, but “looking back on it”, he is glad to have been part of the day. The prince also paid tribute to his father for the way he took care of them after Diana’s death in a car crash. “One of the hardest things for a parent to have to do is to tell your children that your other parent has died,” he said. “How you deal with that I don’t know but, you know, he was there for us.”Harry and his brother, Prince William, have spoken in a series of interviews leading up to the 20th anniversary of their mother’s death on 31 August. 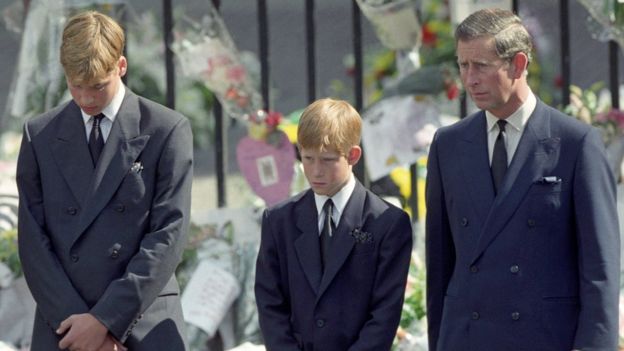 The princes also give a heart-rending account of having to walk behind Diana’s coffin at the funeral, with William recalling that he ‘just wanted to go into a room and cry’. Paying tribute to his father for his attempts to comfort them in the aftermath of Diana’s death, Prince Harry says: ‘One of the hardest things for a parent to have to do is to tell your children that your other parent has died.‘But he was there for us, he was the one out of two left and he tried to do his best and to make sure we were protected and looked after.

‘But, you know, he was going through the same grieving process as well.’ Harry says his reaction to being told the news was one of ‘disbelief’, and there was ‘no sudden outpouring of grief’. 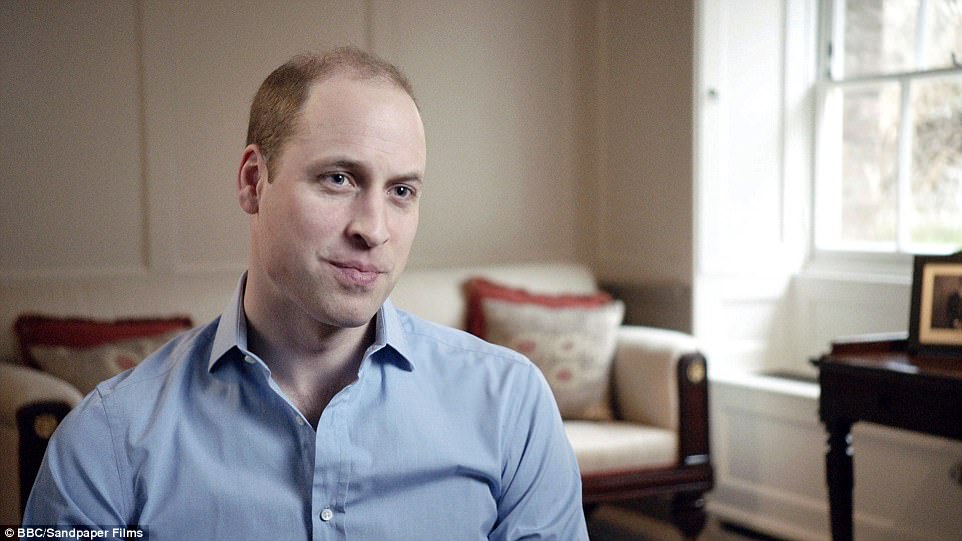 William says he was ‘disorientated, dizzy… and very confused’. He adds: ‘I remember just feeling completely numb. And you keep asking yourself “why me?” all the time. “What have I done?” ’ The documentary, Diana, 7 Days, marks the 20th anniversary of Diana’s death and tells the behind-the-scenes story of the week before her funeral. It features some of the major figures at the time including former prime minister Tony Blair, senior royal aides and Diana’s family. 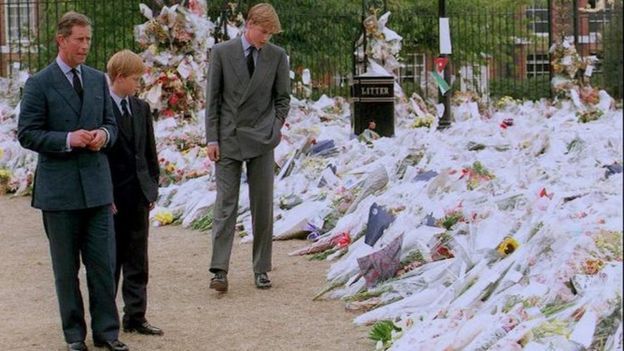 You May Like Also Queen Elizabeth Found Guilty In Missing Children Case ??

In the film, the brothers praise their grandmother, the Queen, who faced an unprecedented public backlash for remaining at Balmoral with them in the dark days after their mother died on August 31, 1997.

‘I think it was a very hard decision for my grandmother to make. She felt very torn between being a grandmother to William and Harry and her Queen role,’ William says. The documentary, made by respected US director Henry Singer, who made the documentary 9/11: The Falling Man, sees the princes speak with raw honesty about their emotions at the time.

The documentary also explores the decision to keep the Royal Family at their home in Balmoral, Scotland, for a week after Diana’s death, which led to widespread public criticism. Both William and Harry, pictured with father Charles on the way to church in Balmoral the day after their mother’s death, said they respected their grandmother’s decision to allow them to grieve in private 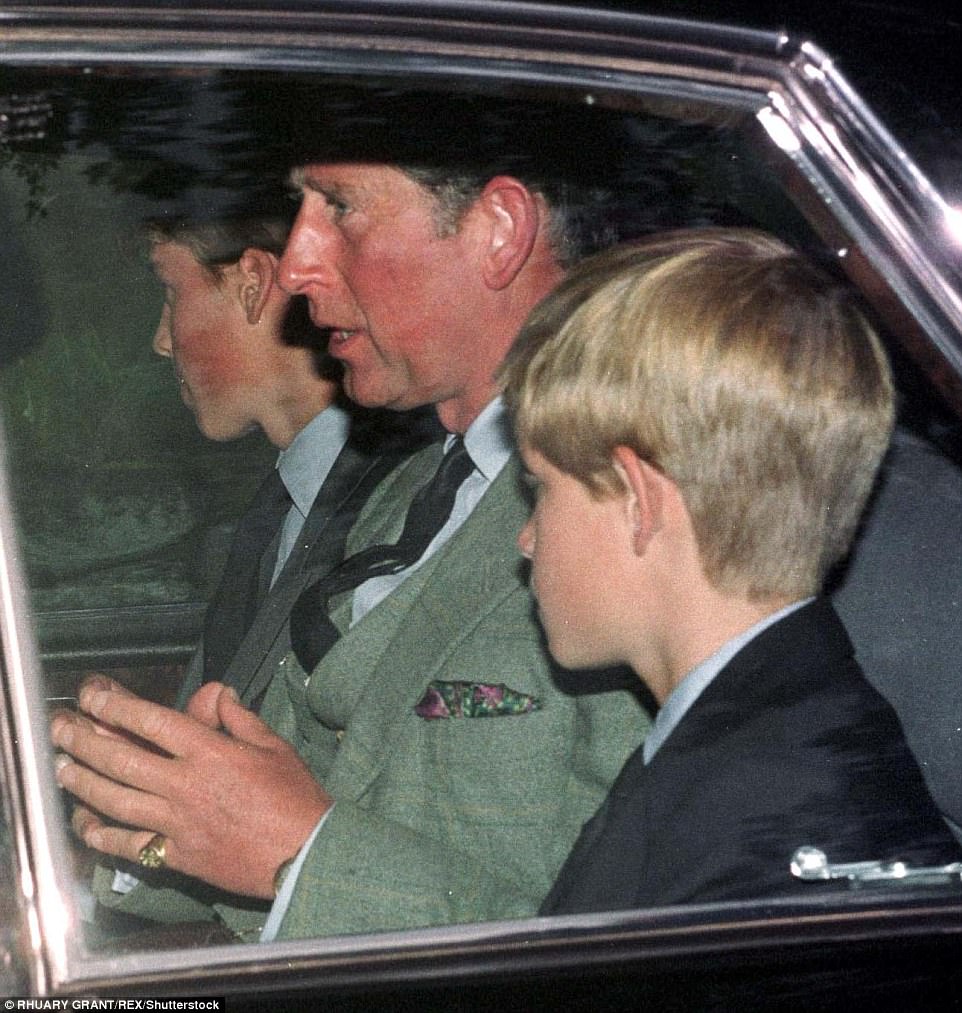 William and Harry are pictured here saluting as they arrived at Kensington Palace on September 5, 1997, to find the residence surrounded by flowers and tributes to their late mother A day before the family also inspected flowers and cards left in Diana’s memory at Balmoral, pictured, after they attended a private church ceremony to pay their respects before the funeral 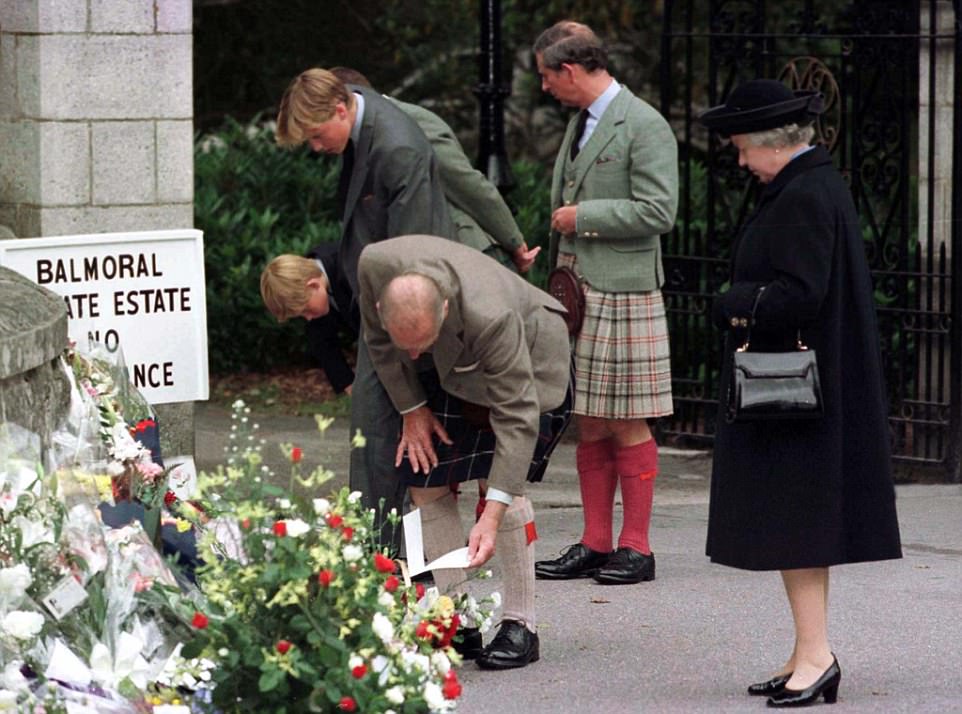 Diana was killed after the Mercedes she was travelling in crashed in a tunnel in Paris, pictured, killing friend Dodi Fayed and driver Henri Paul, who was later found to be drunk at the wheel and held responsible for the crash along with pursuing paparazzi by the official French investigation 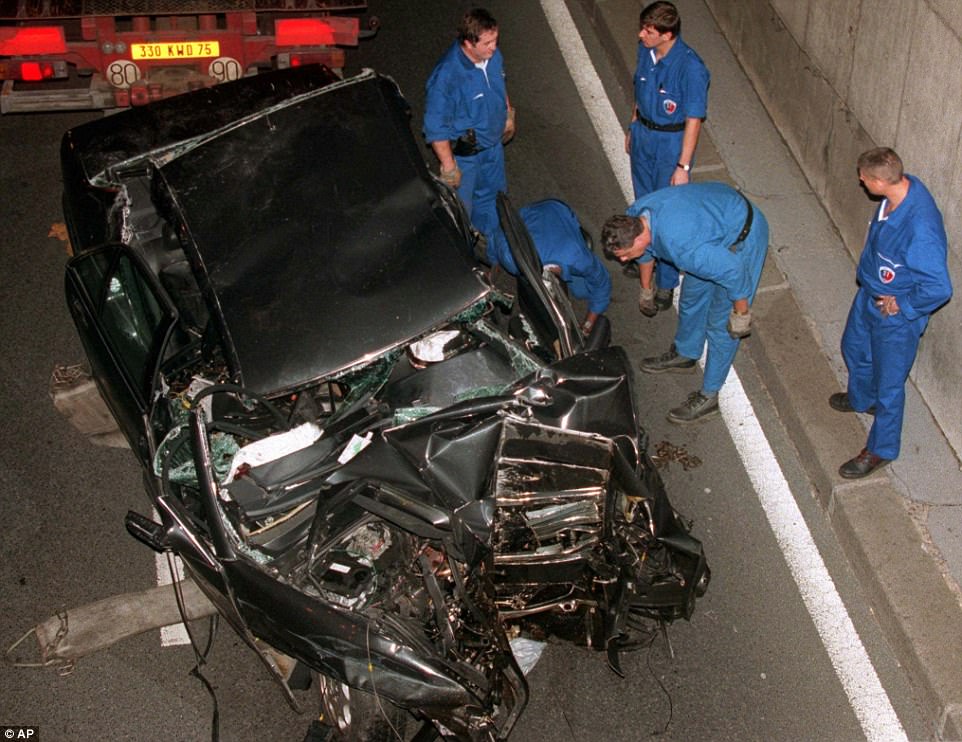 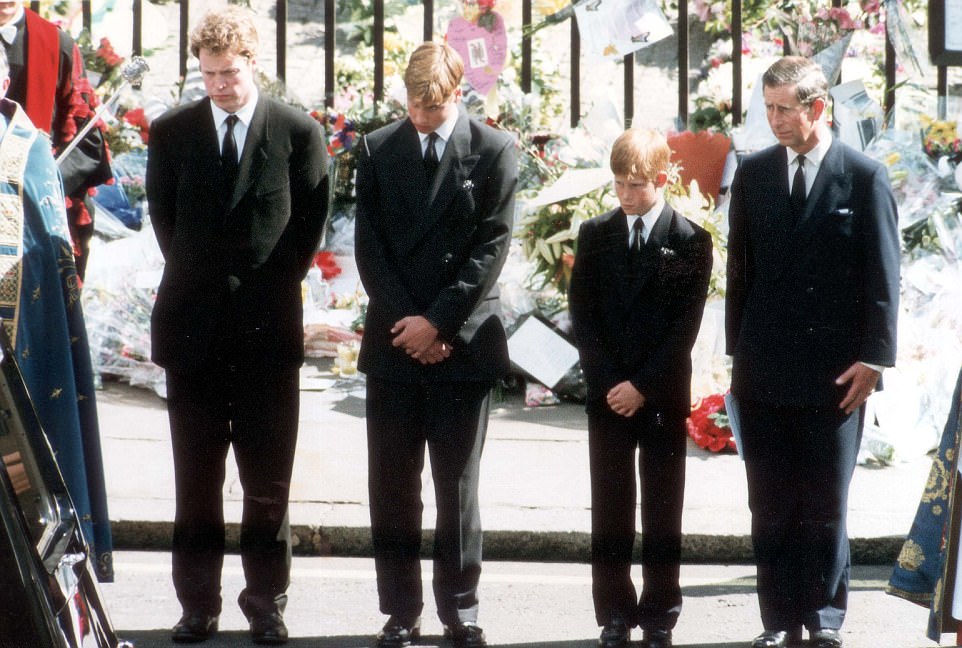 The Duke of Cambridge walked behind Diana’s coffin along with brother Harry, father the Prince of Wales, uncle Earl Spencer and grandfather Prince Philip. You May Like Also OMG! If “London Bridge Is Down”, All Hell Breaks Loose In The U.K And Around The World. 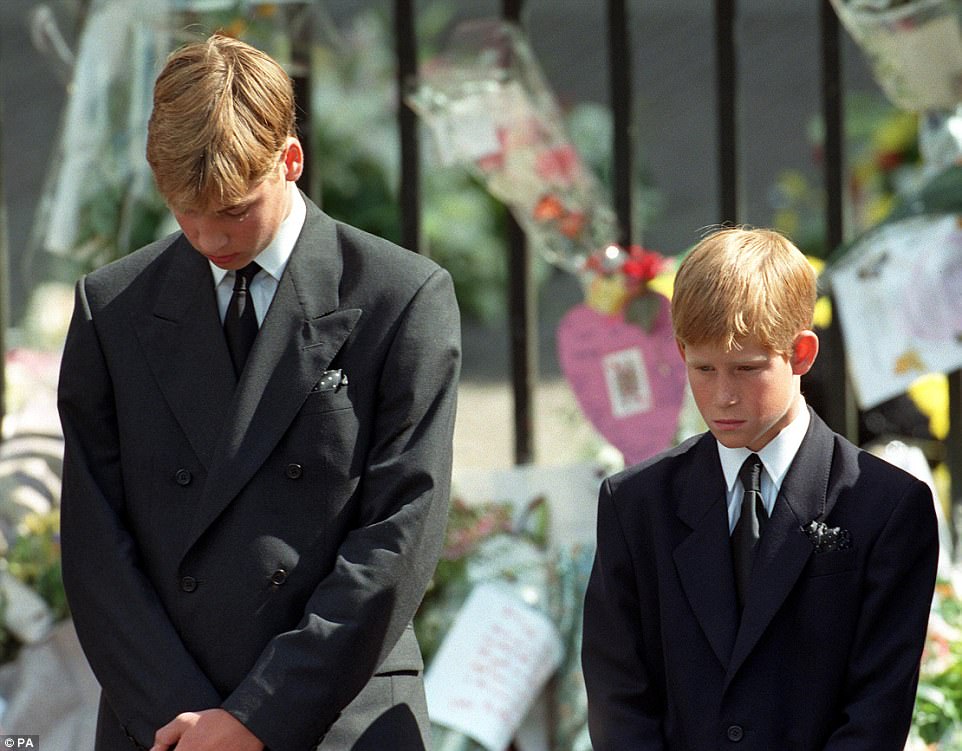 The arrangement of white roses contained a note from her sons, in an enveloped marked Mummy 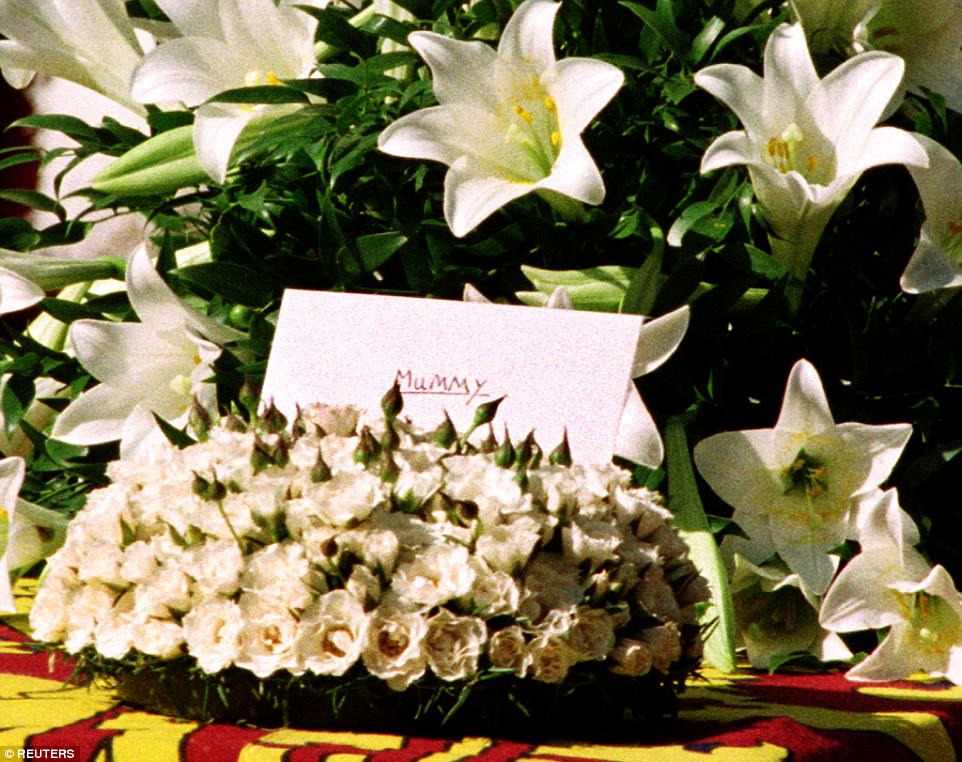 Prince William, pictured at his mother’s funeral in 1997, has revealed he used his fringe as a ‘safety blanket’ to ‘hide away’ from the thousands of mourners 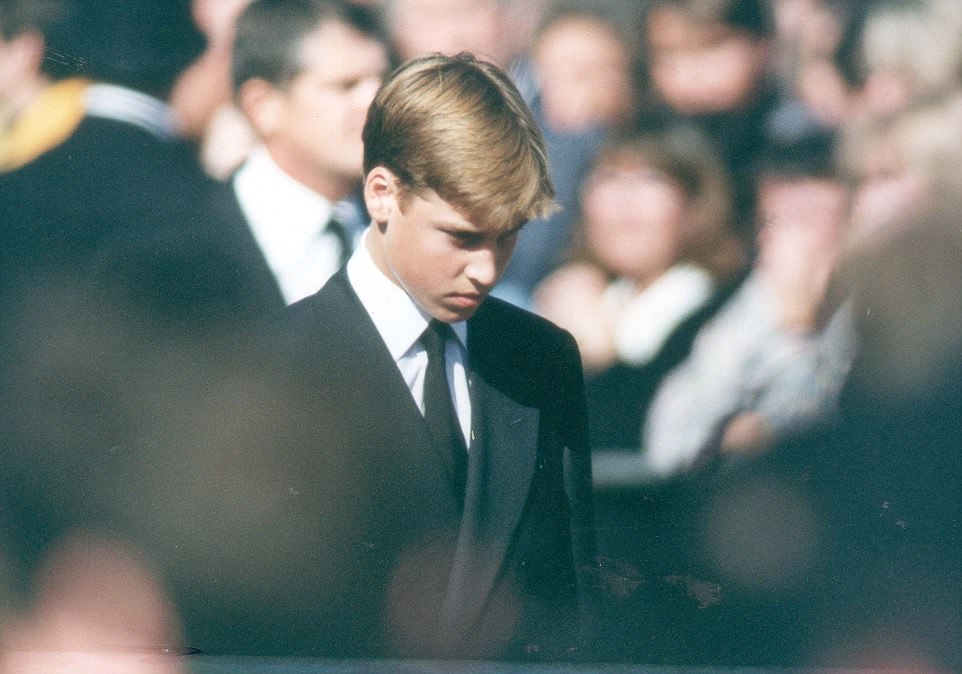 One of The Queen’s former aides has revealed she was deeply hurt by public criticism over how she handled Princess Diana’s death. She is pictured with Prince Philip in Balmoral on August 31, the day of Diana’s death, and the Royals were criticised for staying in Scotland for another week rather than returning to Buckingham Palace Scores of mourners gathered outside the palace, four days after her death, and the absence of a flag continued to raise concerns and cause the public to go against The Queen 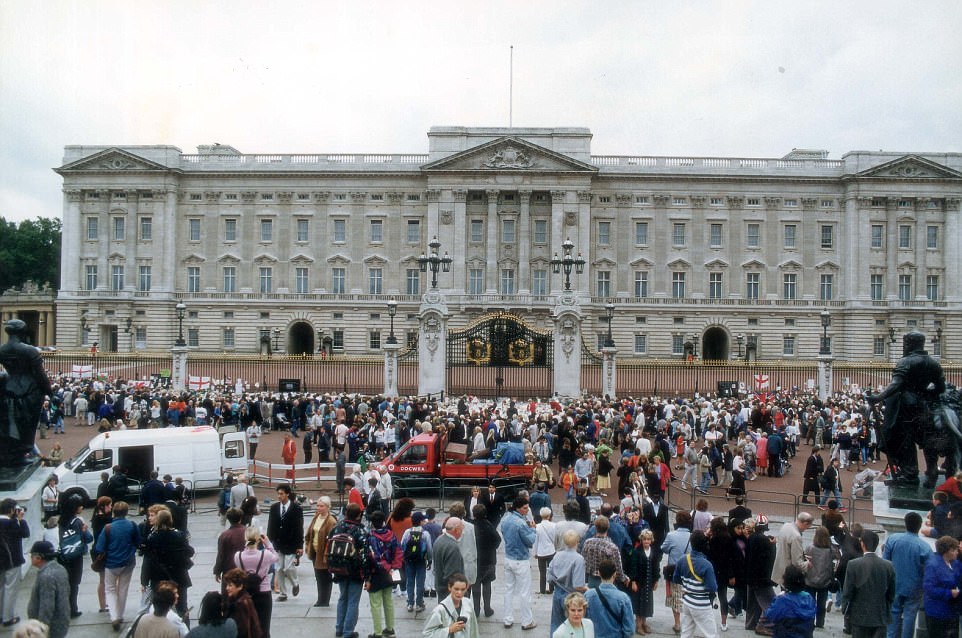 The Queen, pictured, eventually returned to London in September and was greeted by huge swathes of the public who had come to pay tribute to Diana Prince Harry is pictured holding his father’s hand as they look through cards and flowers left in tribute to Diana. The brothers also talk on the documentary at how going to church just hours after learning of their mother’s death was ‘the last thing they wanted to do 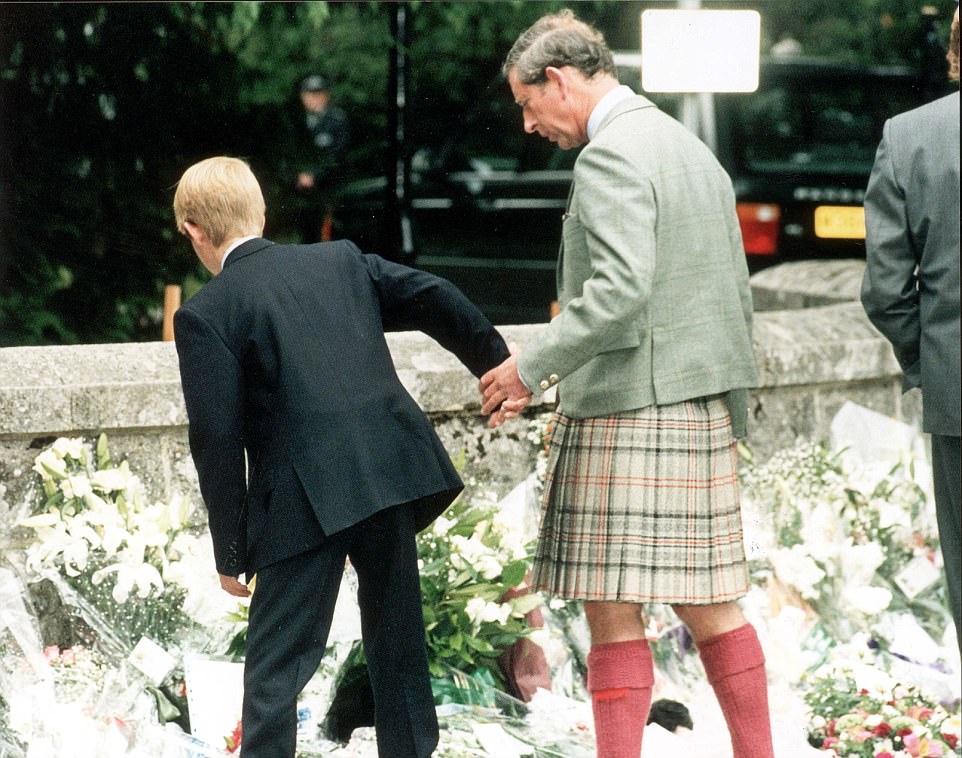 William, pictured with his family at Balmoral, said he put his game face on when they examined flowers outside Balmoral when ‘all he wanted to do was cry’ The Queen made a special public address, pictured, on September 5 to share her family’s grief with the nation, and agreed to make the speech because of her ‘sense of duty’ 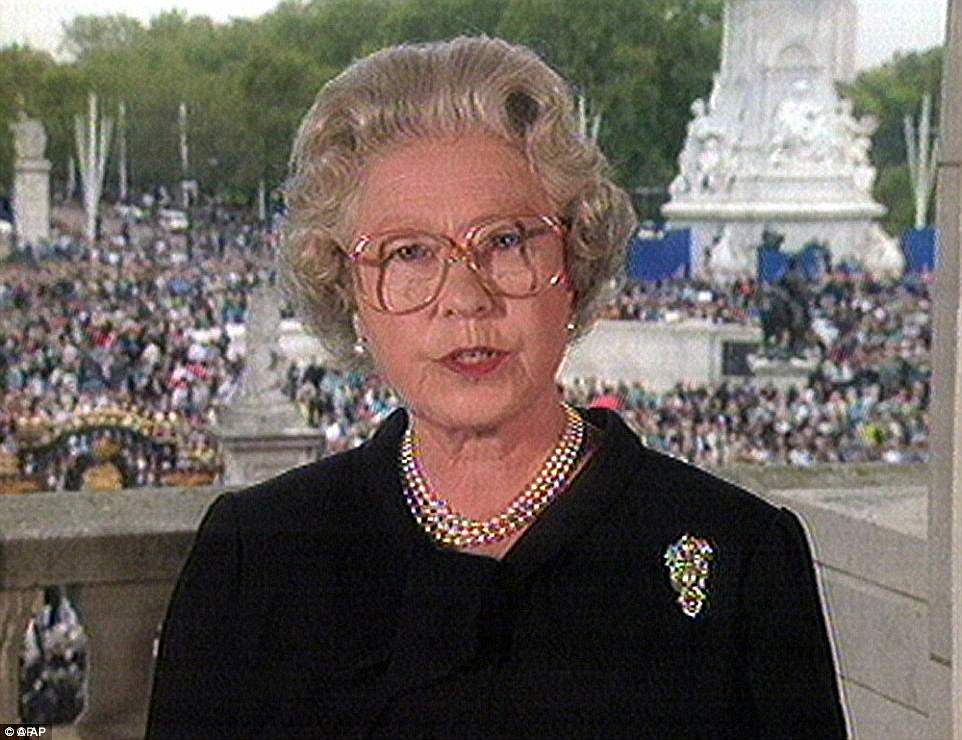 William, pictured at the funeral, said he felt if he looked at the floor ‘his hair came down and no one could see him’, adding he used his locks as a ‘safety blanket’ 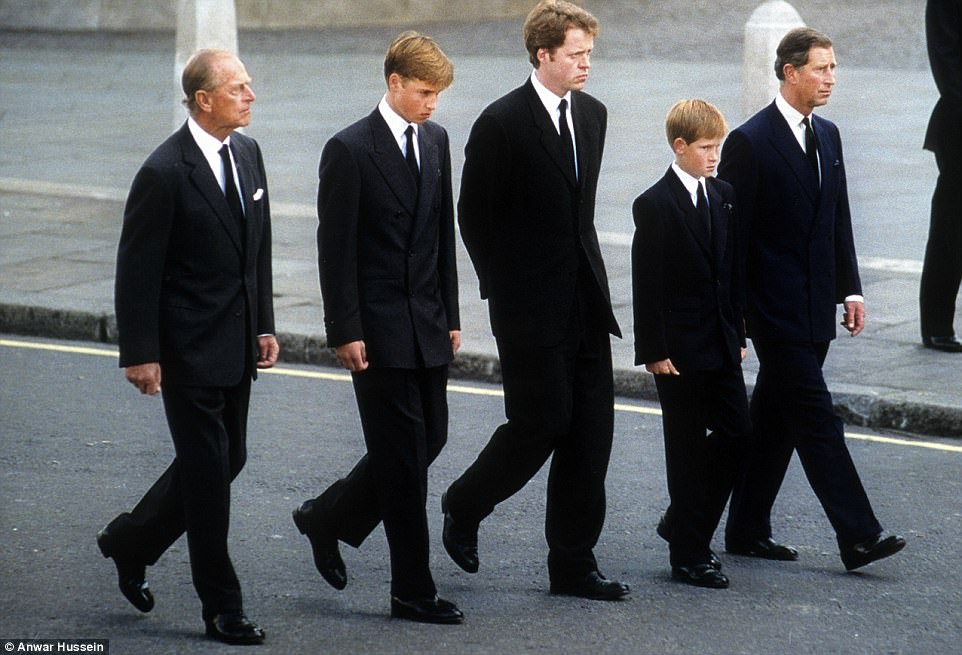 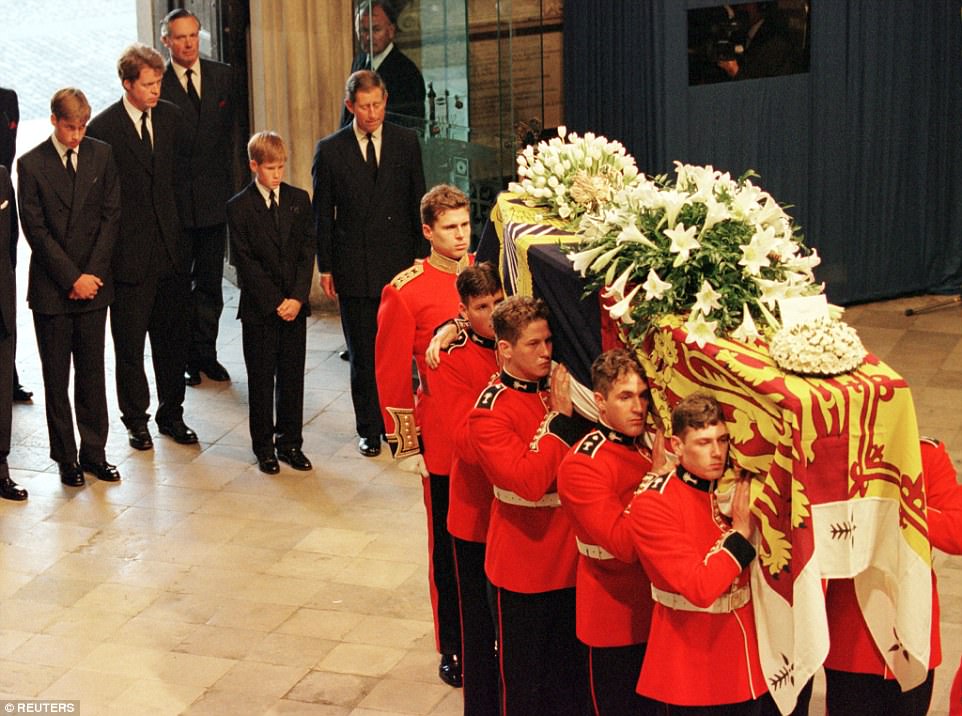 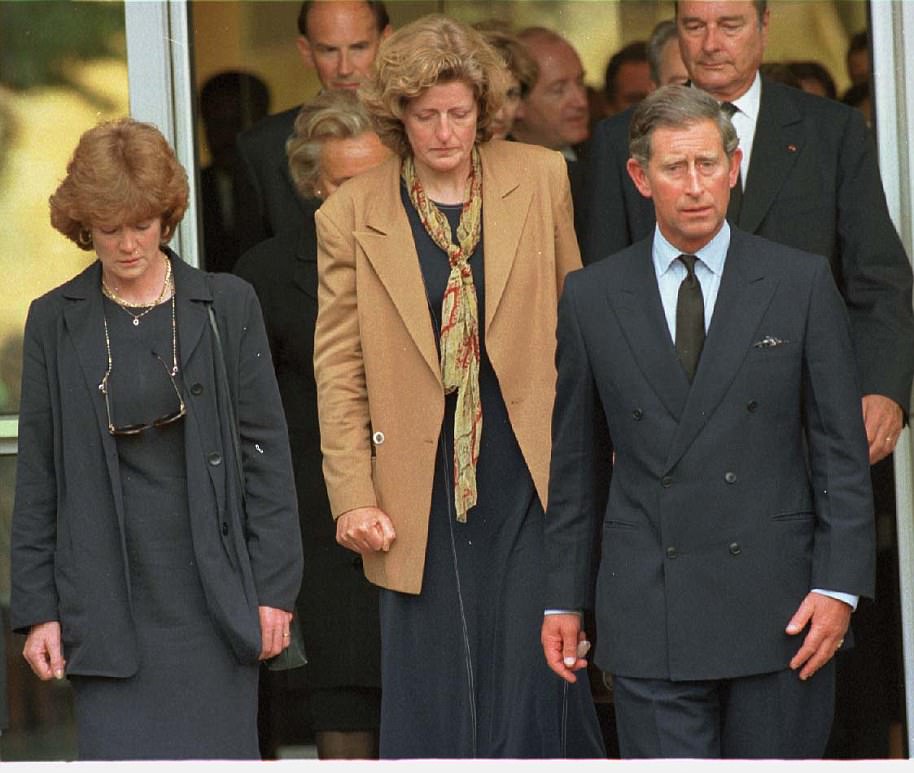 On the day of Princess Di’s funeral, Buckingham Palace finally erected a Union Jack at half mast in her honour, with The Queen making the decision, according to a former aide You May Like Also What Happens When Queen Elizabeth Breaks The Royal Dress Code For The First Time in Almost 50 Years?

Queen Elizabeth II and the Queen Mother stand outside Westminster Abbey, pictured, with members of the clergy ahead of Diana’s funeral 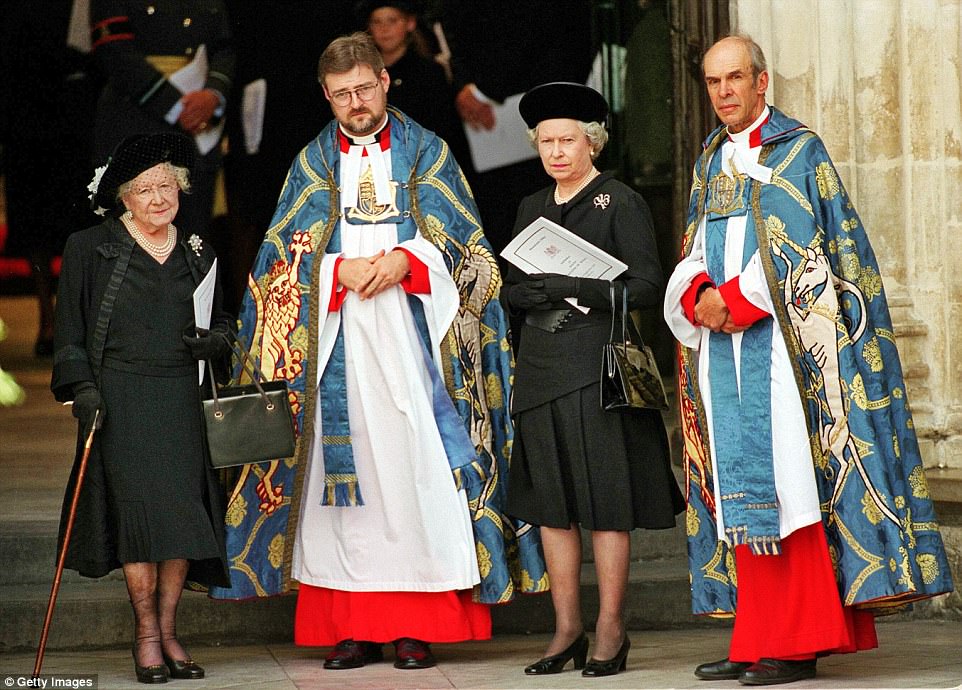 Mourners lined the M1 Motorway to pay their respects to Diana as her coffin was driven to Althorp House, where she was buried in the grounds 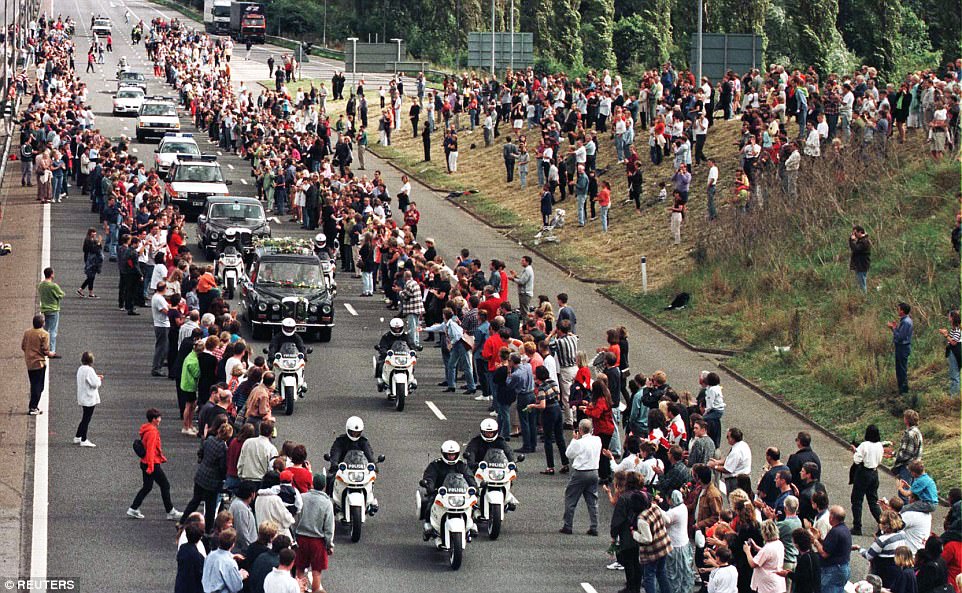 You May Like Also 91 Amazing Facts About Queen Elizabeth II