Life can be strange. Aquatic life can be more strange. We curated the great catalog of aquatic life and pulled out 21 animals that you probably didn’t know were actually real. 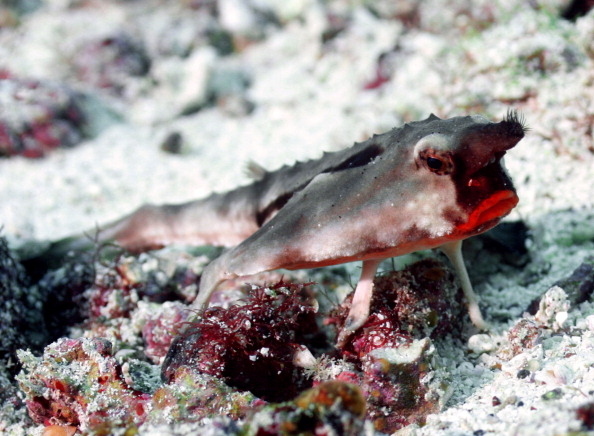 The red-lipped batfish or Galapagos batfish is a fish of unusual morphology found around the Galapagos Islands and off Peru at depths of 3 to 76 m. Red-lipped batfish are closely related to rosy-lipped batfish (Ogcocephalus porrectus), which are found near Cocos Island off the Pacific coast of Costa Rica.  Click here. 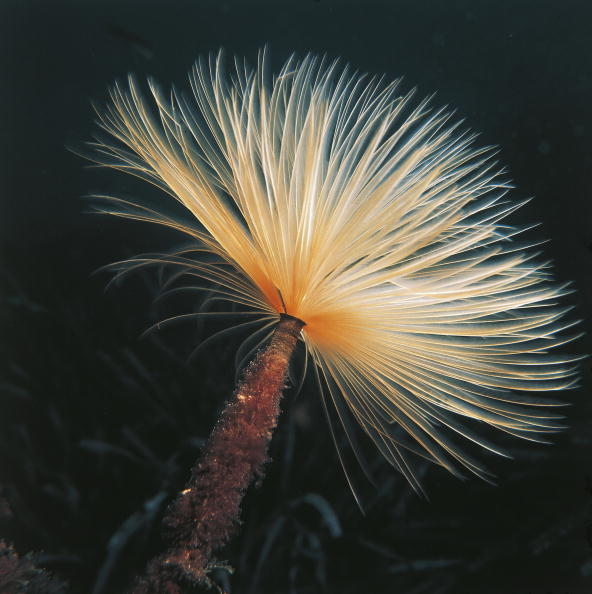 Spirographis is a genus of annelids of the family Sabellidae,the class of polychaete, sedentary, which have gill plume multicolor.With 20-50 cm long, annelids belonging to this genus live anchored in rock or other hard substrates, constructing a tubular structure consisting of agglomerated particles by a vasa mucus hardened secreting as they grow. Read more. 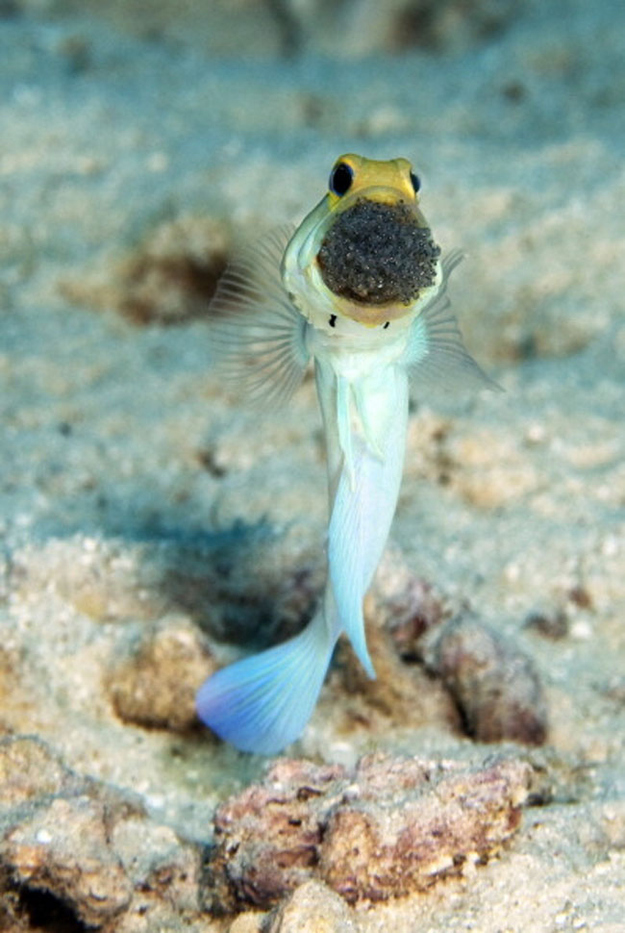 Opistognathus aurifrons, the Yellow-headed jawfish, is a species of jawfish native to coral reefs in the Caribbean Sea. It is found at depths of from 3 to 40 metres. Know more. 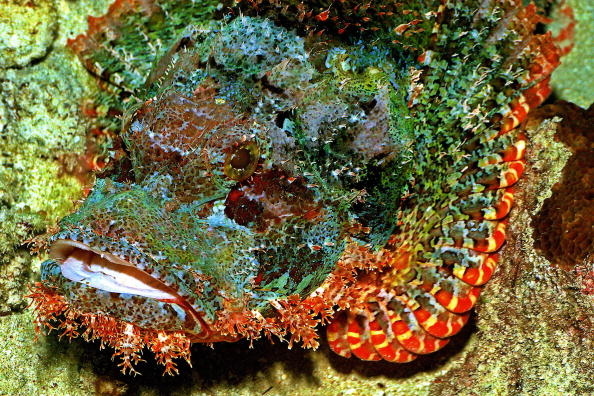 Scorpaenidae, the scorpionfish, are a family of mostly marine fish that includes many of the world’s most venomous species. As the name suggests, scorpionfish have a type of “sting” in the form of sharp spines coated with venomous mucus. Visit here. 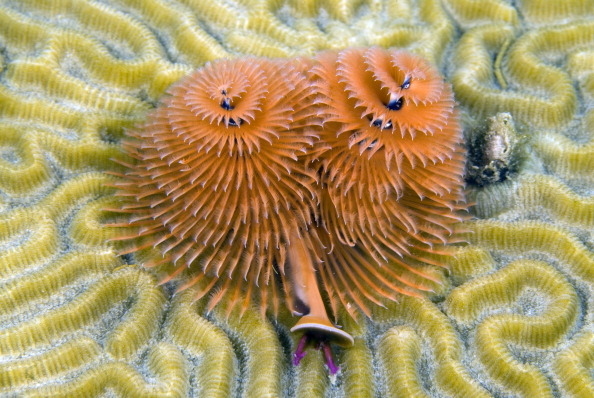 Spirobranchus giganteus, commonly known as Christmas tree worms, are tube-building polychaete worms belonging to the family Serpulidae. The worm is aptly named, both its common and Latin names refer to the two chromatically hued spiral structures, the most common feature seen by divers. Click here. 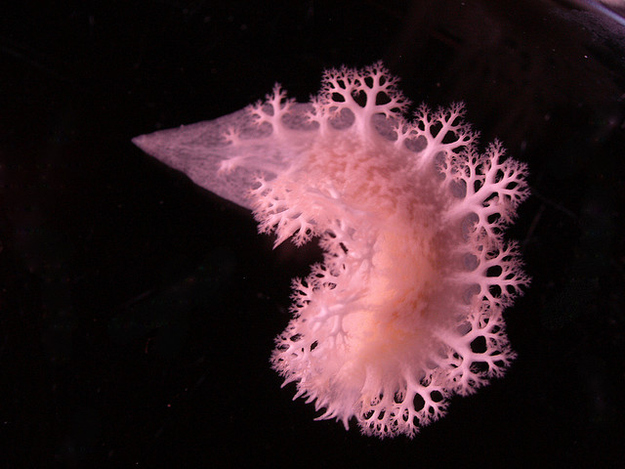 Nudibranchs /ˈnjuːdᵻbræŋk/ are a group of soft-bodied, marine gastropod molluscs which shed their shells after their larval stage. They are noted for their often extraordinary colours and striking forms.Nudibranchs are often casually called sea slugs, but many sea slugs belong to several taxonomic groups which are not closely related to nudibranchs. A number of these other sea slugs, such as the photosynthetic Sacoglossa and the colourful Aglajidae, are often confused with nudibranchs. Read more. 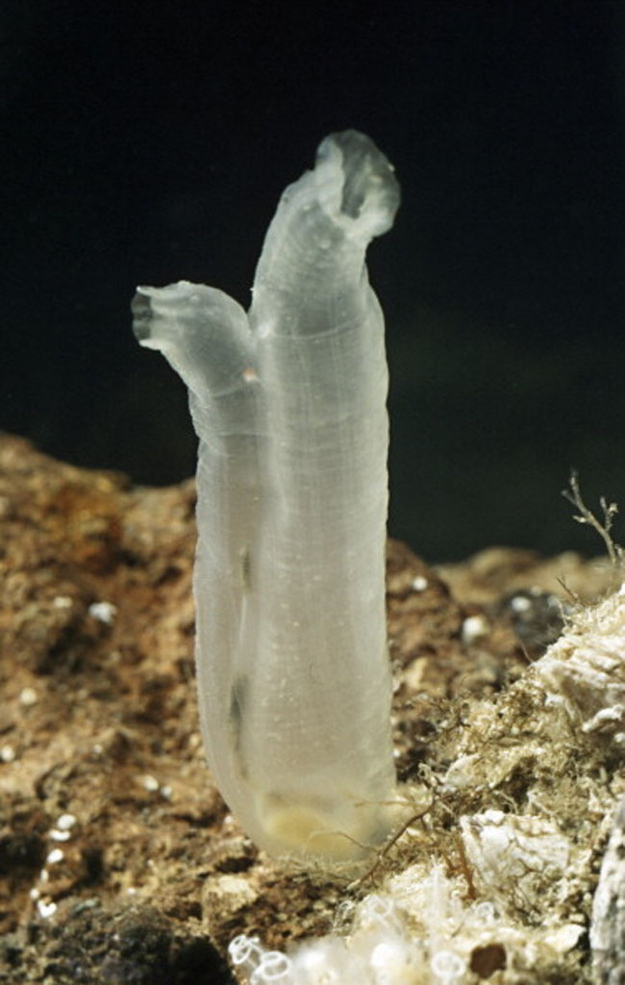 A tunicate is a marine invertebrate animal, a member of the subphylum Tunicata, which is part of the Chordata, a phylum which includes all animals with dorsal nerve cords and notochords. The subphylum was at one time called Urochordata, and the term urochordates is still sometimes used for these animals. Know more. 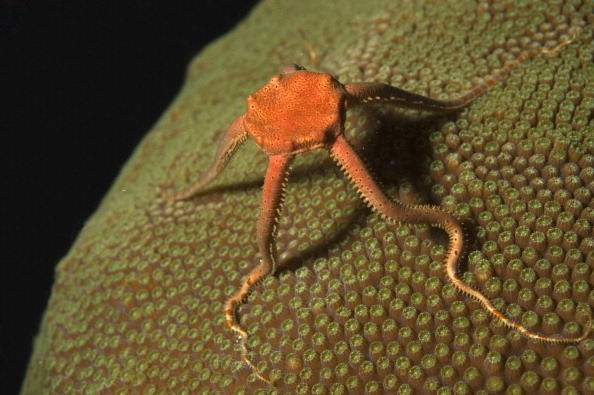 Brittle stars or ophiuroids are echinoderms in the class Ophiuroidea closely related to starfish. They crawl across the sea floor using their flexible arms for locomotion. The ophiuroids generally have five long, slender, whip-like arms which may reach up to 60 cm (24 in) in length on the largest specimens.  Visit here. 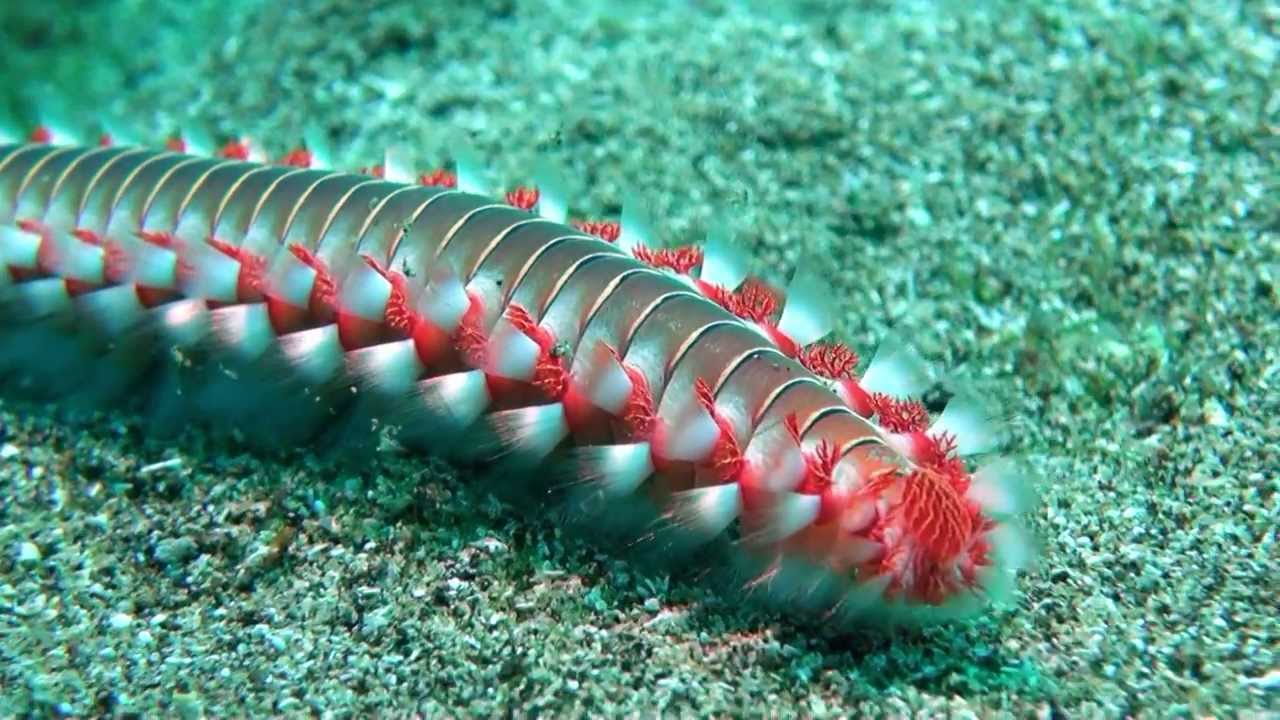 The bearded fireworm is a type of marine bristleworm belonging to the Amphinomidae family, native to the tropical Atlantic Ocean and the Mediterranean Sea.At first glance, this fire worm looks like a centipede with its elongated and flattened appearance, multiple segments, white silks, and parapodia and gills located on the side of its body.  Click here. 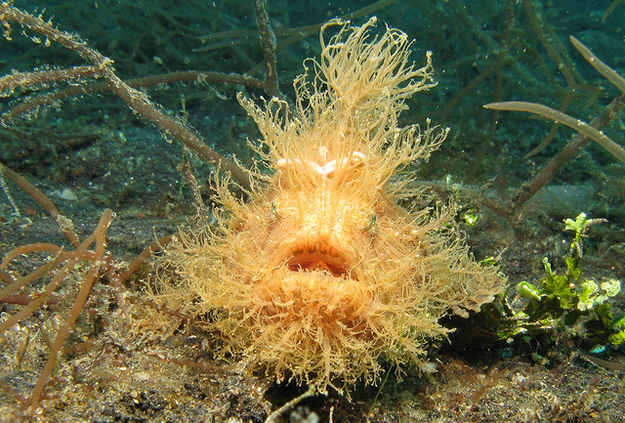 Frogfishes are any member of the anglerfish family Antennariidae, of the order Lophiiformes. Antennariids are known as anglerfishes in Australia, where the term “frogfish” refers to members of the unrelated family Batrachoididae. Frogfishes are found in almost all tropical and subtropical oceans and seas around the world, the primary exception being the Mediterranean Sea. Read more. 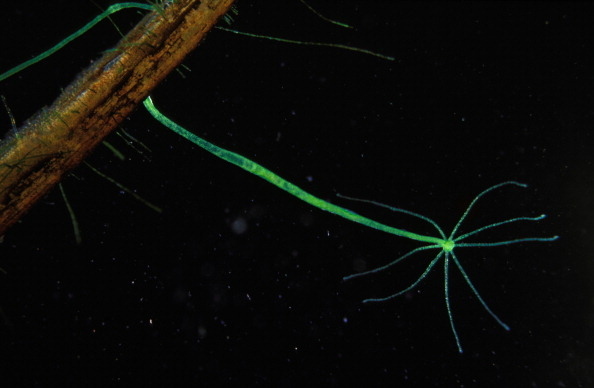 Hydra may refer to: Lernaean Hydra, a many-headed serpent in Greek mythology; Hydra (genus), a genus of simple freshwater animals belonging to the phylum. Know more. The humphead wrasse is the largest living member of the family Labridae. Males are typically larger than females and are capable of reaching lengths of up to 2 meters from tip to tail and weighing up to 180 kg, but the average length is generally a little less than 1 meter. Females rarely grow larger than one meter in length. Visit here. 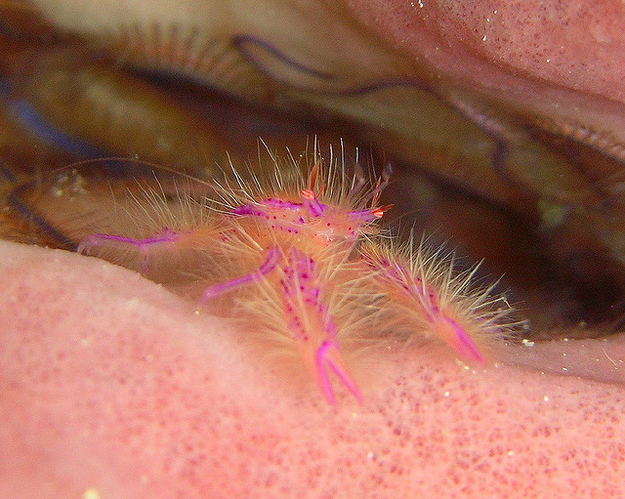 Squat lobsters are dorsoventrally flattened crustaceans with long tails held curled beneath the thorax. They are found in the two superfamilies Galatheoidea and Chirostyloidea, which form part of the decapod infraorder Anomura, alongside groups including the hermit crabs and mole crabs. Click here. 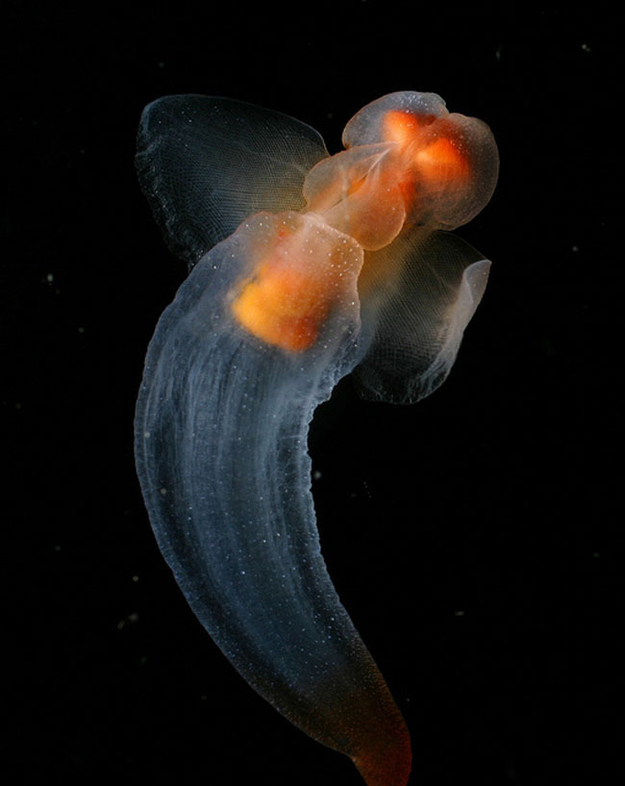 Sea butterflies, scientific name Thecosomata, are a taxonomic suborder of small pelagic swimming sea snails. These are holoplanktonic opisthobranch gastropod mollusks in the informal group Opisthobranchia.Thecosomata are the most common (in terms of diversity, species richness, and abundance) in the top 25 metres (82 ft) of the ocean, and become rarer the deeper one samples.  Read more. 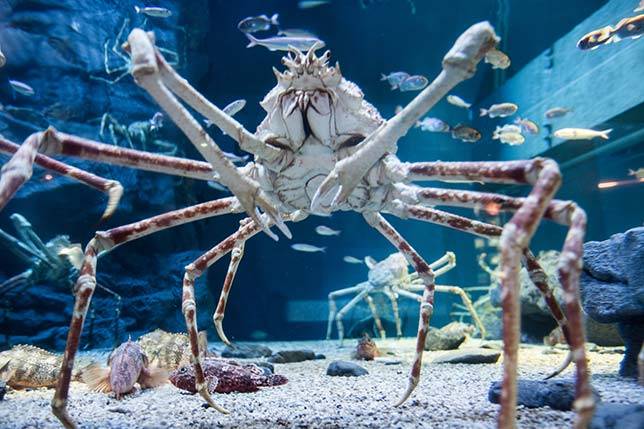 The Japanese spider crab, Macrocheira kaempferi, is a species of marine crab that lives in the waters around Japan. It has the largest leg span of any arthropod. It is the subject of small-scale fishery which has led to some conservation measures.  Know more. 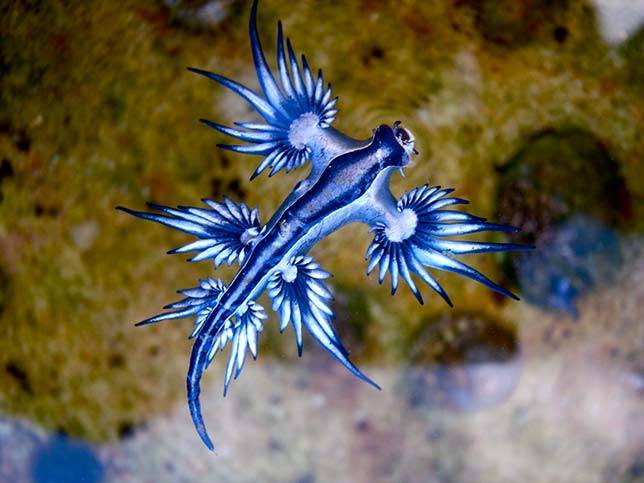 Glaucus atlanticus is a species of small, blue sea slug, a pelagic aeolid nudibranch, a shell-less gastropod mollusk in the family Glaucidae. At maturity Glaucus atlanticus can be up to 3 centimetres (1.2 in) in length.It is silvery grey on its dorsal side and dark and pale blue ventrally. It has dark blue stripes on its head. It has a flat, tapering body and six appendages that branch out into rayed, finger-like cerata. Visit here. 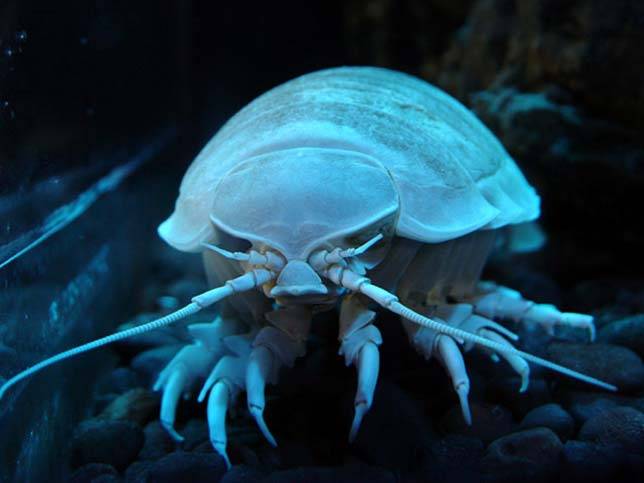 A giant isopod is any of the almost 20 species of large isopods in the genus Bathynomus. They are abundant in cold, deep waters of the Atlantic, Pacific and Indian Oceans. Click here. 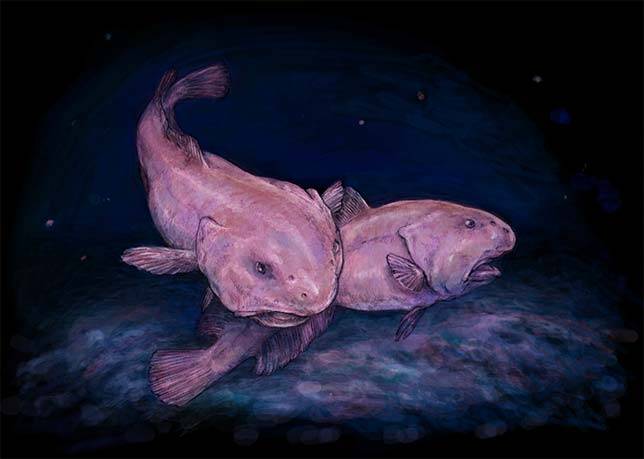 The blobfish is a deep sea fish of the family Psychrolutidae. It inhabits the deep waters off the coasts of mainland Australia and Tasmania, as well as the waters of New Zealand. Blobfish are typically shorter than 30 cm. Read more. 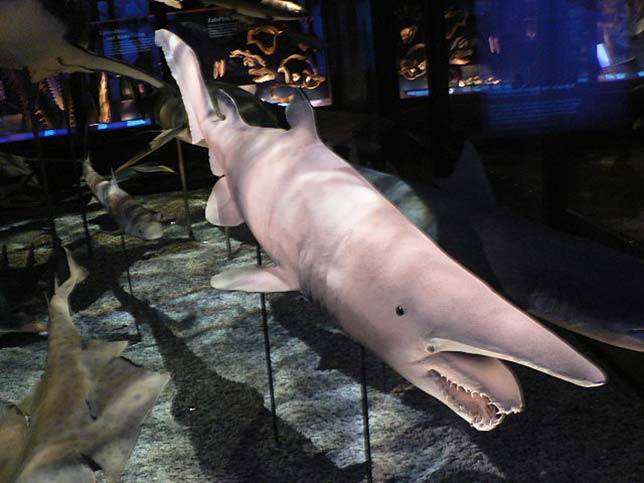 The goblin shark is a rare species of deep-sea shark. Sometimes called a “living fossil”, it is the only extant representative of the family Mitsukurinidae, a lineage some 125 million years old. Know more. 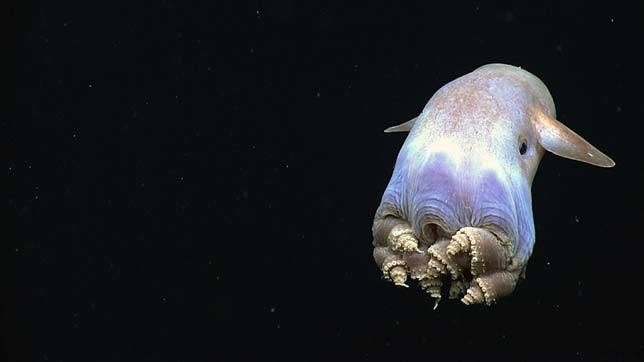 Grimpoteuthis is a genus of pelagic umbrella octopus that live in the deep sea. Prominent ear-like fins protrude from the mantle just above their lateral eyes. They have a U or V shaped shell in their mantle which gives them a bell shaped appearance. Visit here. 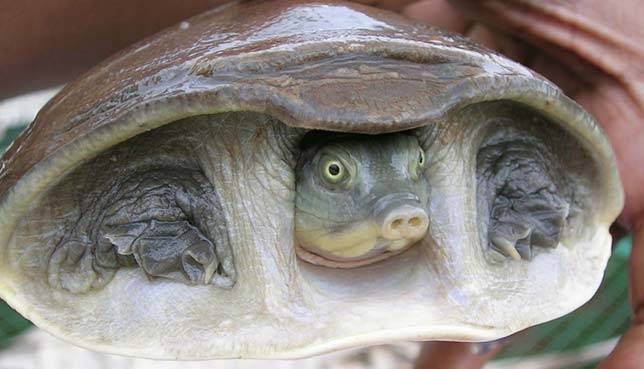