Home » 21 Most Powerful Photos That Changed The World

21 Most Powerful Photos That Changed The World.

A picture is worth a thousand words, it’s true because putting a strong moment into words is very hard, especially when those moments come about after looking other people in times of complete loss and despair.

We compiled this collection of iconic & powerful photos, taking into account cultural significance, news value and overall aesthetics. Check out below. 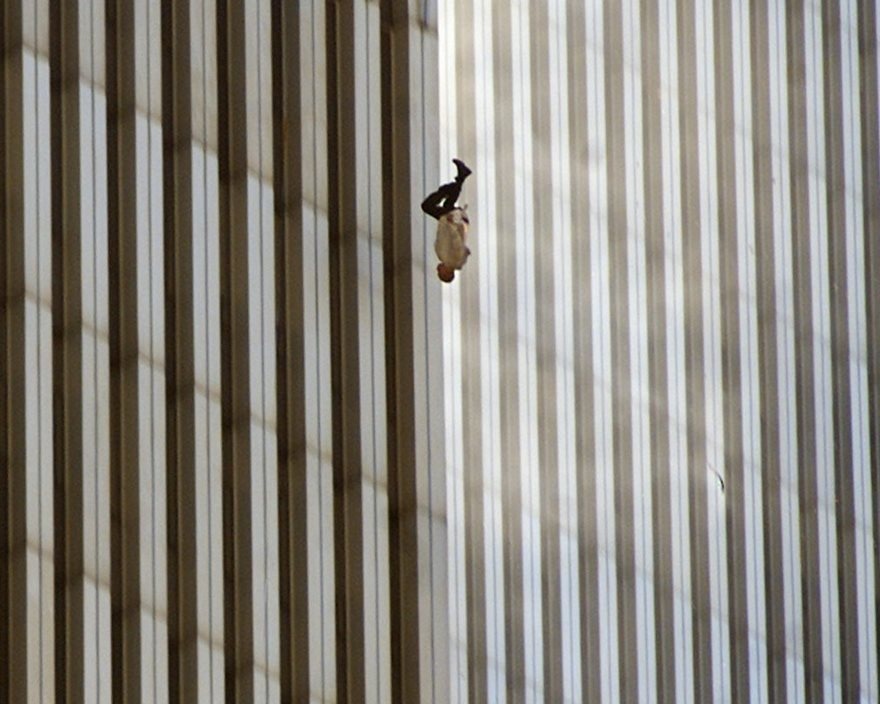 “The Falling Man” was taken at 9:41:15 a.m. shortly after the September 11 attacks. The photo is “one man’s distinct escape from the collapsing buildings, a symbol of individuality against the backdrop of faceless skyscrapers,” says TIME. 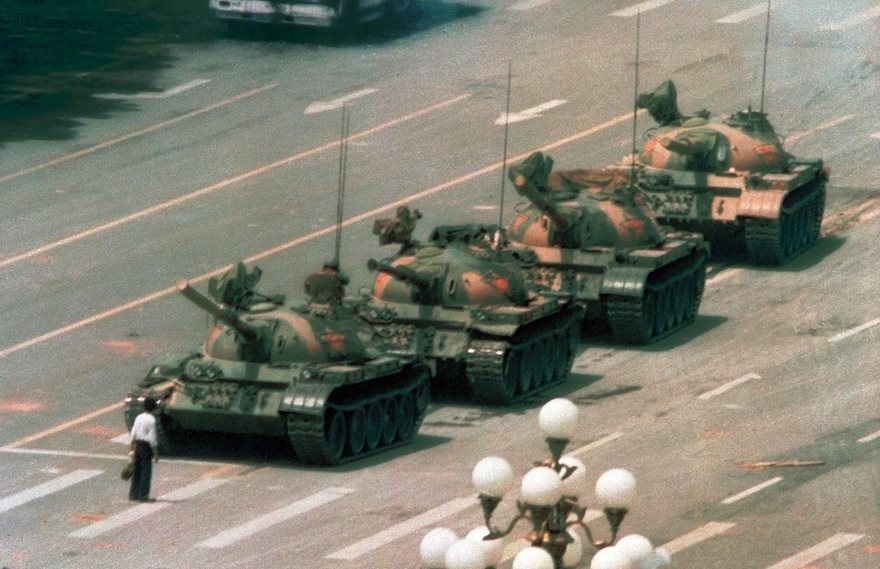 The unidentified man in the photo is known only as “tank man.” He was in the middle of shopping—take a look at the bags in his hands—but decided to try and stop these tanks from moving forward in Tiananmen Square.

This photo of a sailor kissing a nurse shows the lively and spontaneous joy that so many Americans were feeling the moment they learned that World War II was finally over. 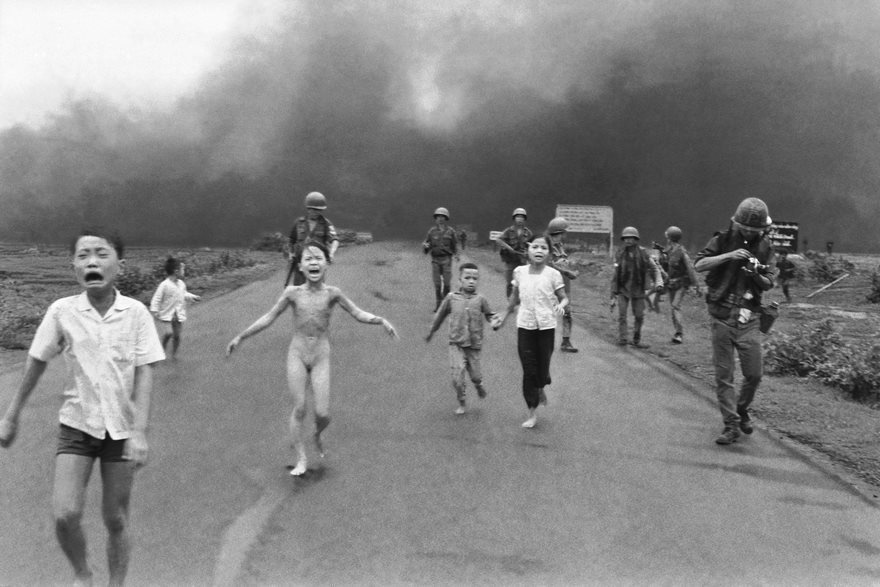 Nick Ut’s Pulitzer Prize-winning photo shows a heartbreaking scene of children fleeing a Napalm bombing in Trang Bang as a result of the Vietnam War. 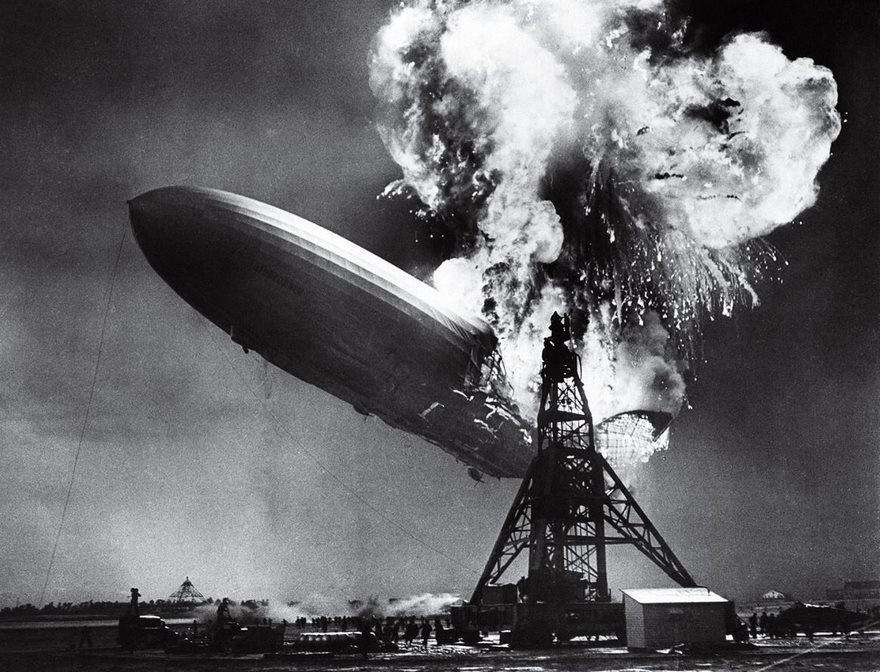 Photographer Sam Shere was waiting for the LZ 129 Hindenburg, a German passenger airship, to come through New Jersey.Electrostatic discharge had sparked leaking hydrogen, killing 36 people (35 on board and 1 on the ground). 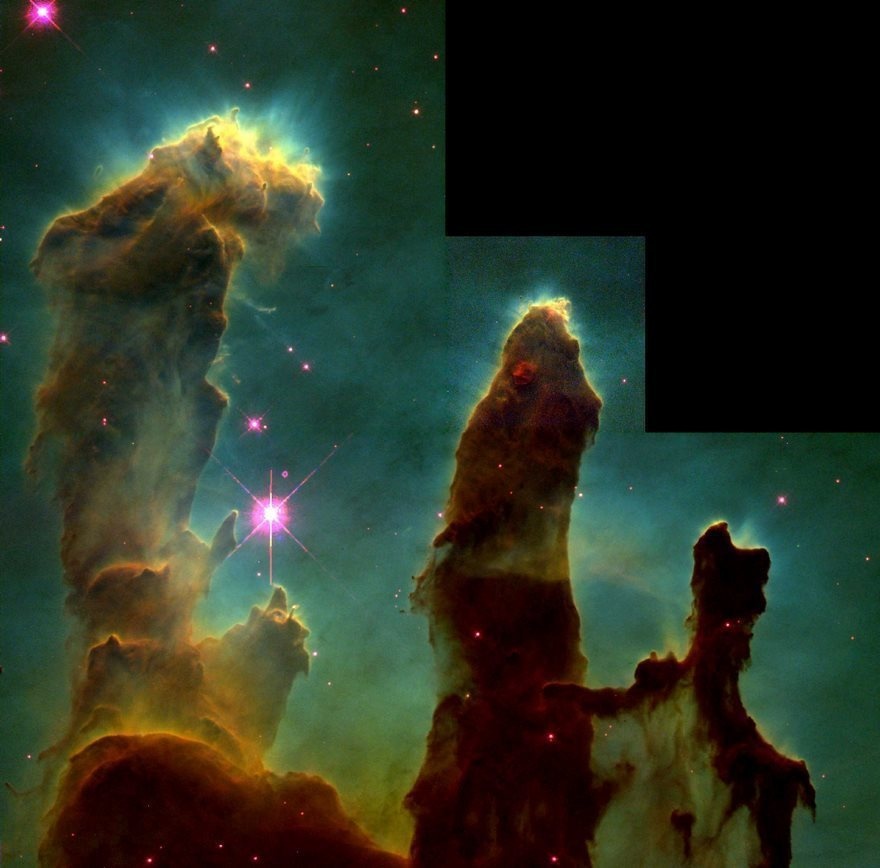 The space shuttle Atlantis housed the Hubble Space Telescope, an instrument that “almost didn’t make it.” A repair mission brought Hubble to work some three years later, and the result was magnificent. Here is the Eagle Nebula in the constellation Serpens Cauda, 6,500 light-years from Earth. 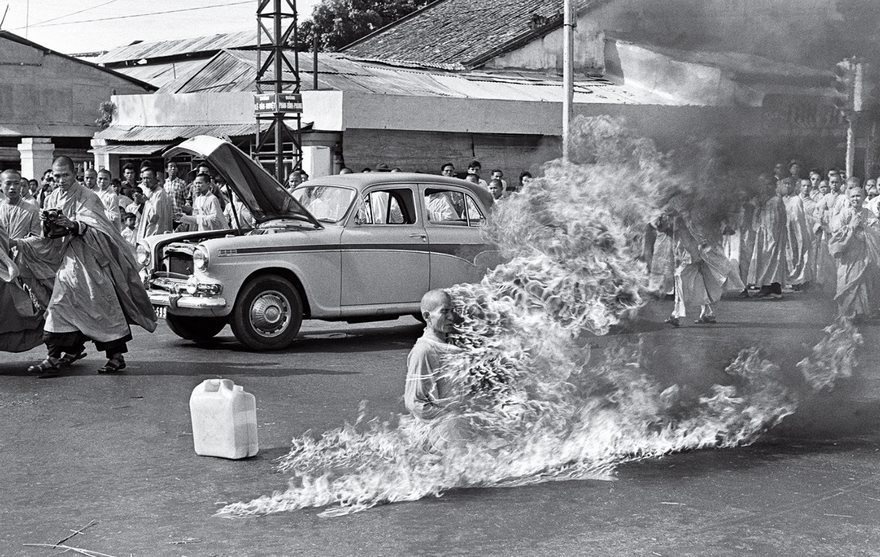 The self-immolation of Vietnamese Mahayana Buddhist monk Thích Quang Duc in Saigon spurred, and continues to spur, waves of emotion in people from all over the world. 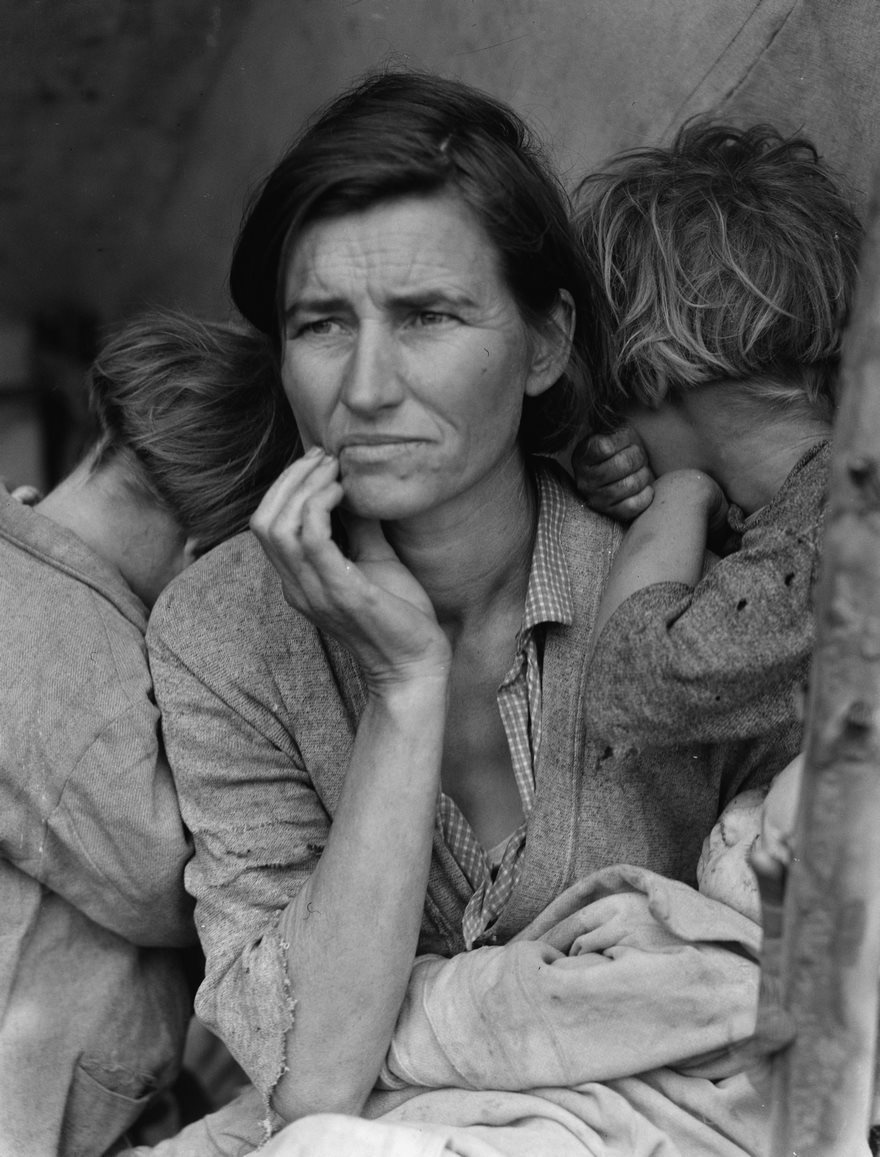 Dorothea Lange’s “Migrant Mother” shows a woman, Frances Owens Thompson, in the middle of the Great Depression. Lange initially drove past Nipomo, where this photo was taken but decided to turn around. 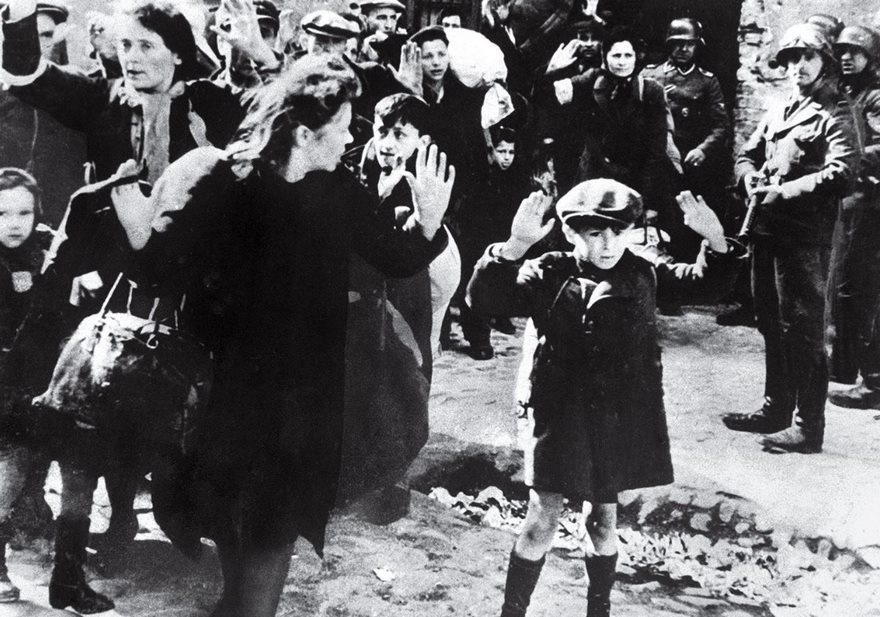 A 7-year-old boy raises his hands while standing alongside other Warsaw ghetto Jews as a German troop looks on. The scene captures the horror of the Holocaust. 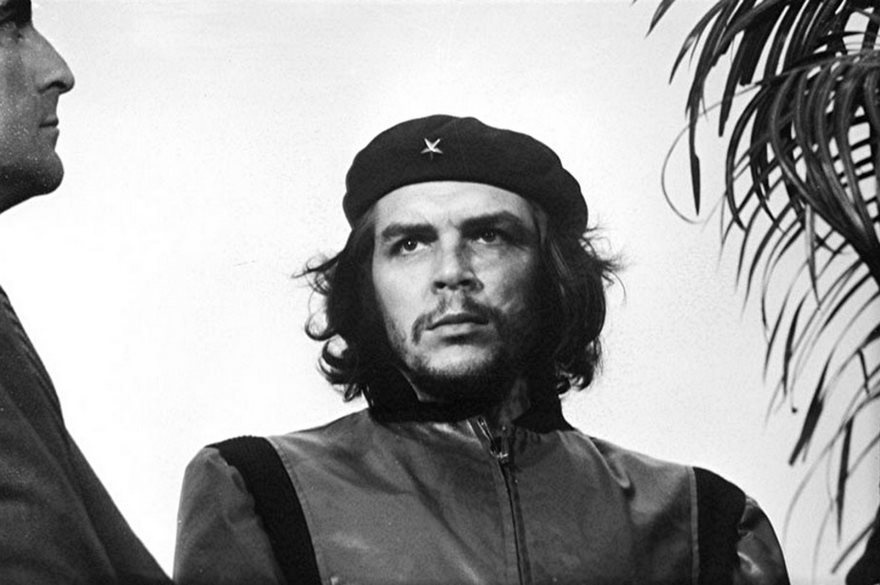 Che Guevara, or El Che, was a communist leader and guerrilla leader in South America. After the Bolivian army executed him in 1967, the Cuban regime and leftists around the world viewed him as a martyr and symbol of radicalism and anti-imperialism. 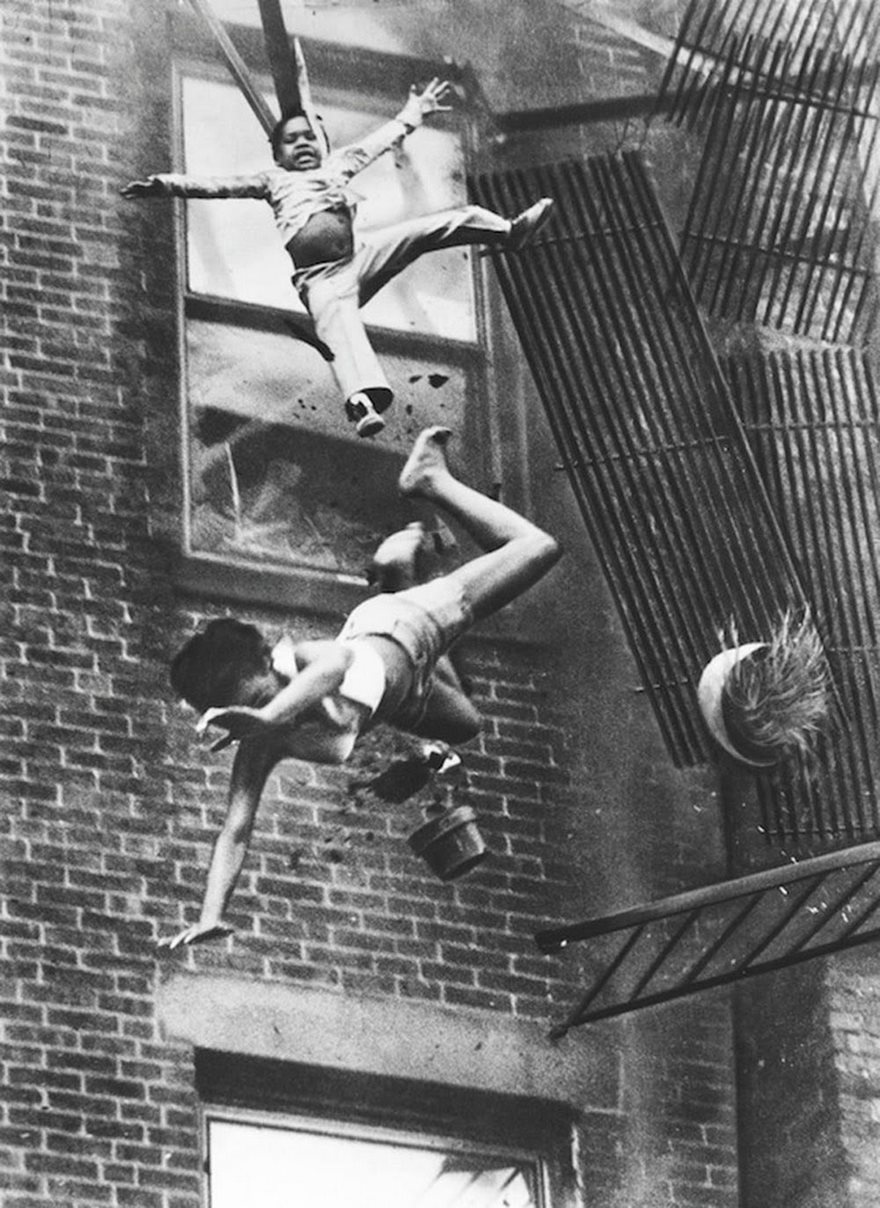 Nineteen-year-old Diana Bryant falls from a burning apartment in Boston, and her 2-year-old goddaughter Tiare Jones follows shortly after. 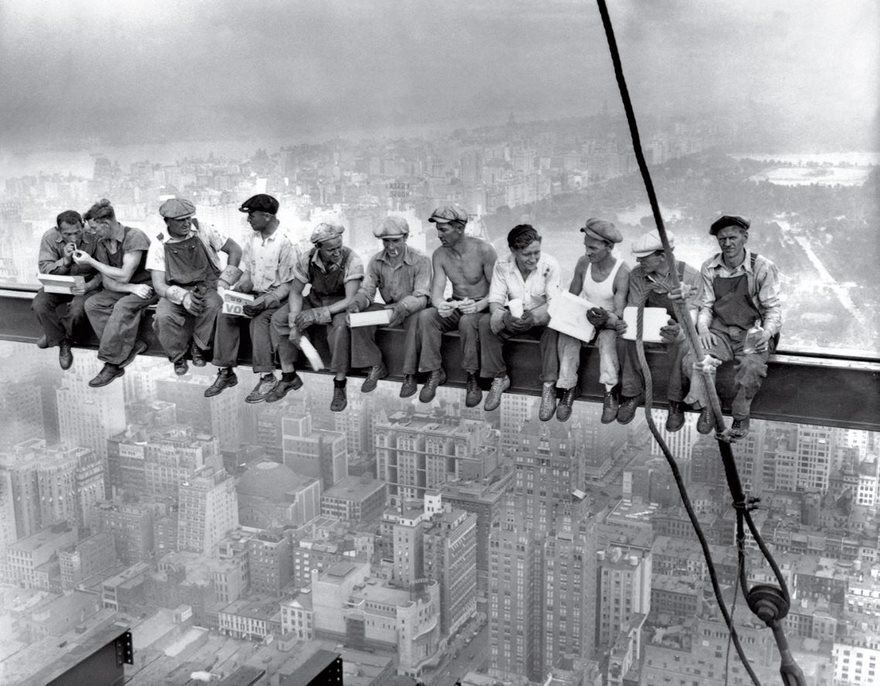 This iconic 20th-century photograph of 11 ironworkers enjoying lunch on a steel beam some 850 feet in the air is one of the biggest mysteries. No one has confirmed the photographer, and only a few of the men have been identified. 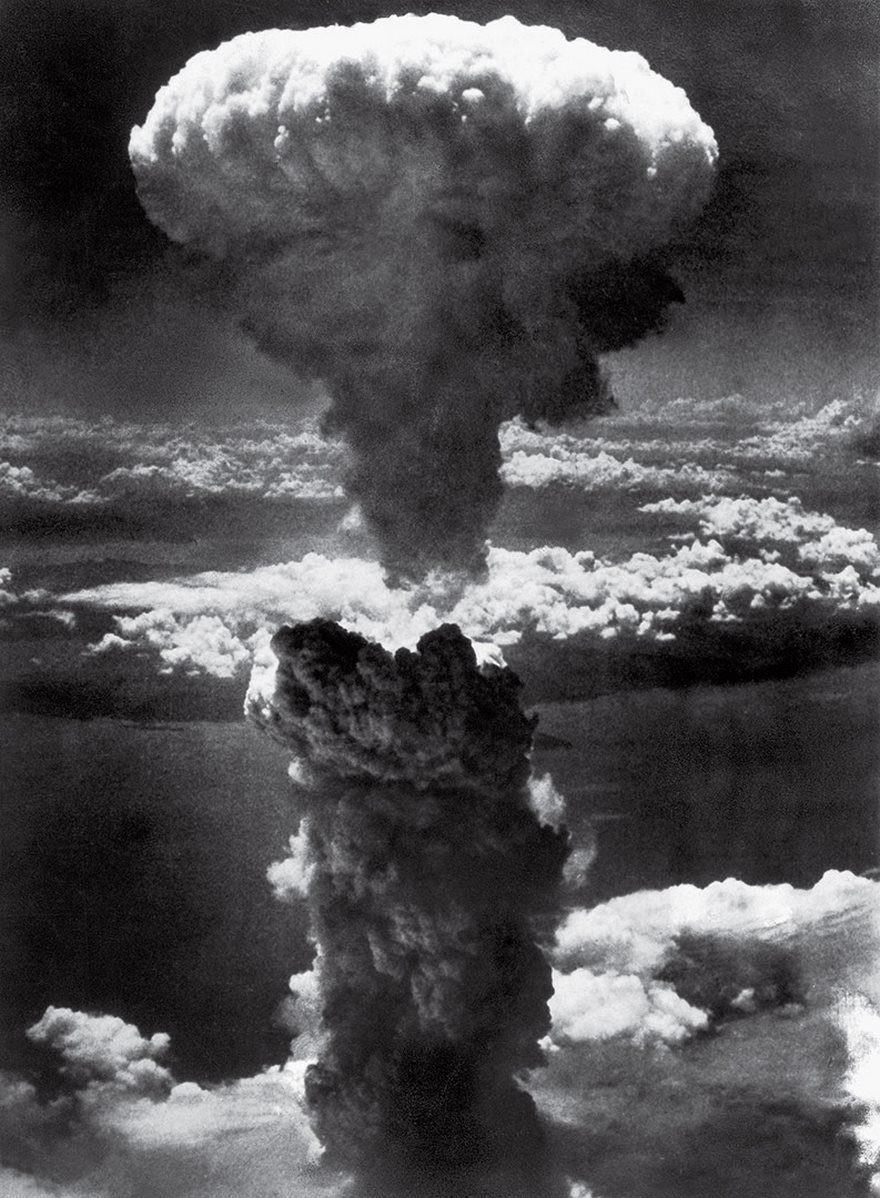 The U.S. bombed Hiroshima on Aug. 6, 1945, and three days later, it bombed Nagasaki. The latter is pictured here. You’re looking at a 45,000-foot cloud of radioactive particles. 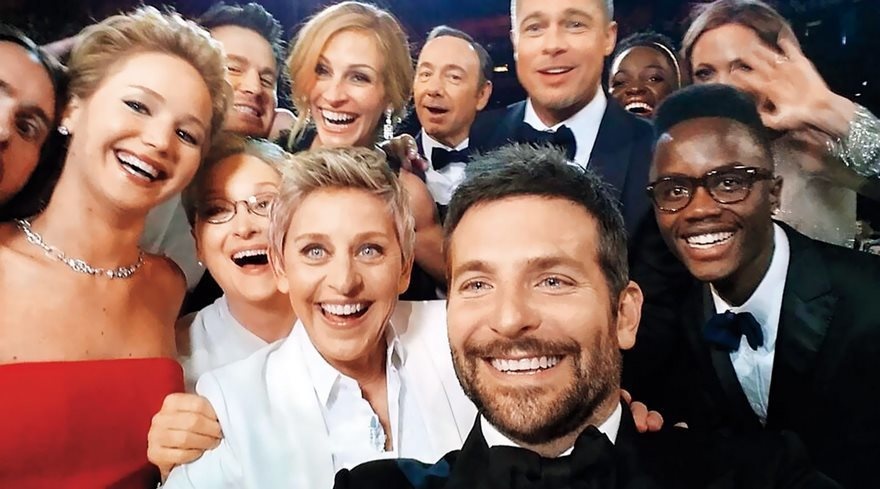 Ellen DeGeneres wanted to take a photo that would break the record for the most retweets to match Meryl Streep’s record-breaking number of Oscar nominations. Bradley Cooper was able to capture this shot, thanks to his long arms.

Aylan Kurdi was a 2-year-old Kurd from Syria, and he was on his way to Greece, reports CTV. He was on a small boat with about a dozen other refugees from the Middle East when it capsized. 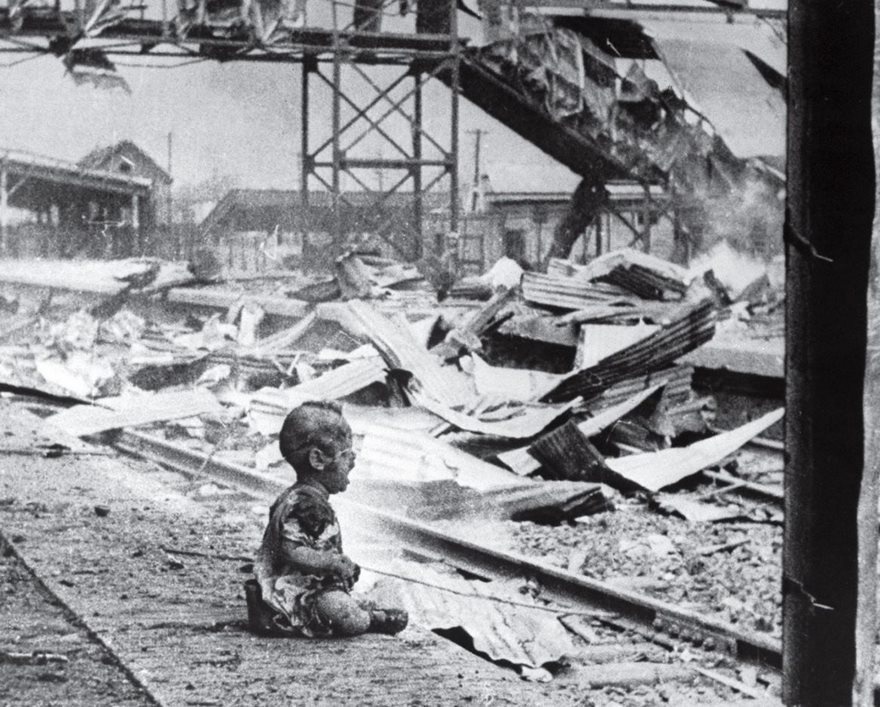 A baby cries out in the middle of a ruined Shanghai South Railway Station.The photo, which sparked western anger of Japanese wartime atrocities, was dubbed “one of the most successful propaganda pieces of all time” by journalist Harold Isaacs.

Philippe Halsman and Surrealist painter Salvador Dalí got their perfect shot after 28 tries. Included in the photo is Dalí’s Leda Atomica. The theme is that of suspension, as shown by not only the painting but the cats, chair, easel, and water as well. 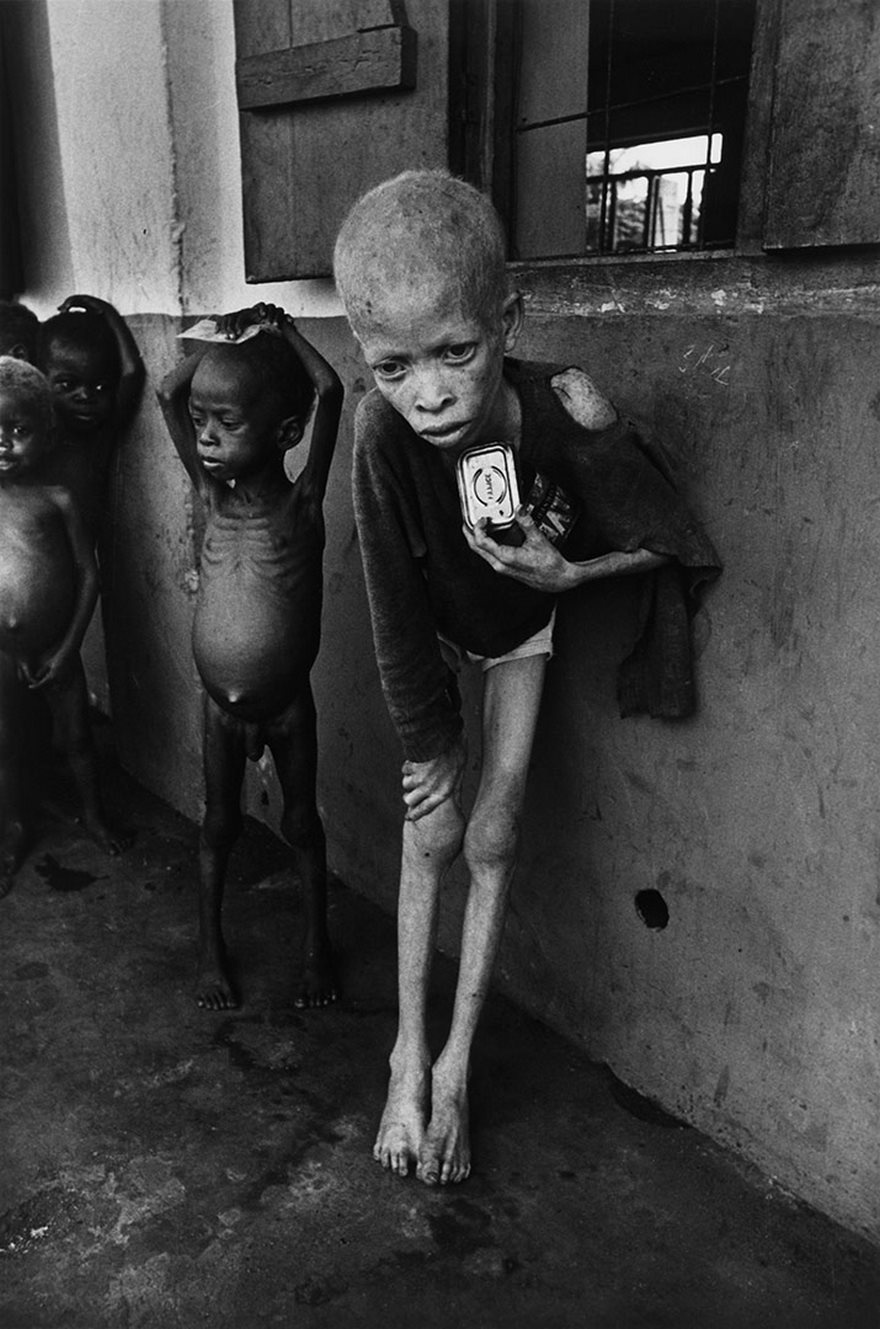 The Republic of Biafra, a secessionist state in Nigeria, existed for a short period between 1967 to 1970. Photographer Don McCullin describes this as one of the most obscene photos he’s ever taken. A young albino boy is ostracized by his peers, on top of suffering from hunger. 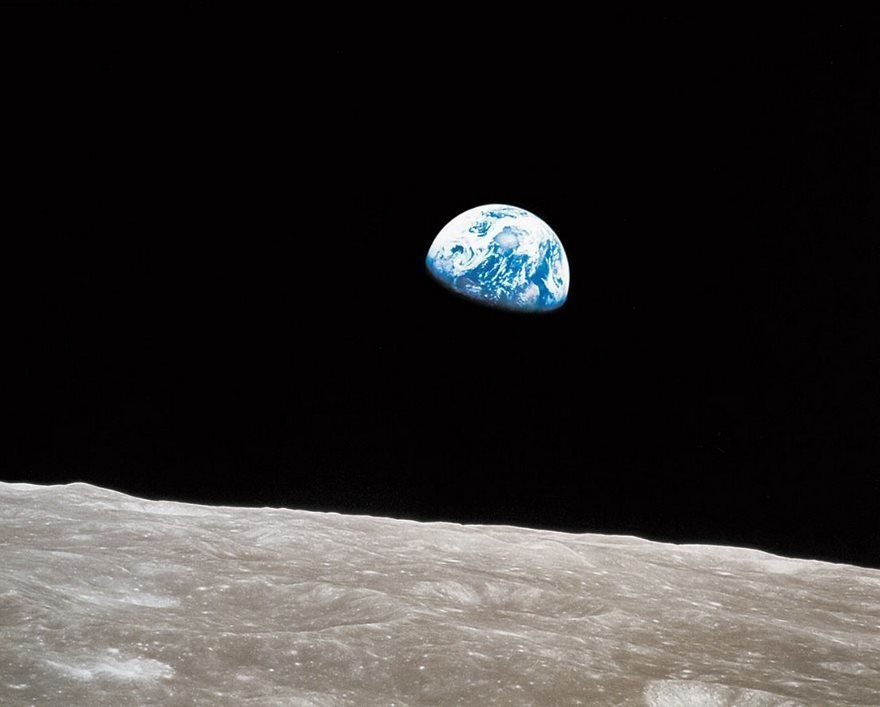 Astronauts abroad Apollo 8 conducted a live broadcast from lunar orbit, and the photos they shared were remarkable; viewers could see the Earth and moon in one shot. 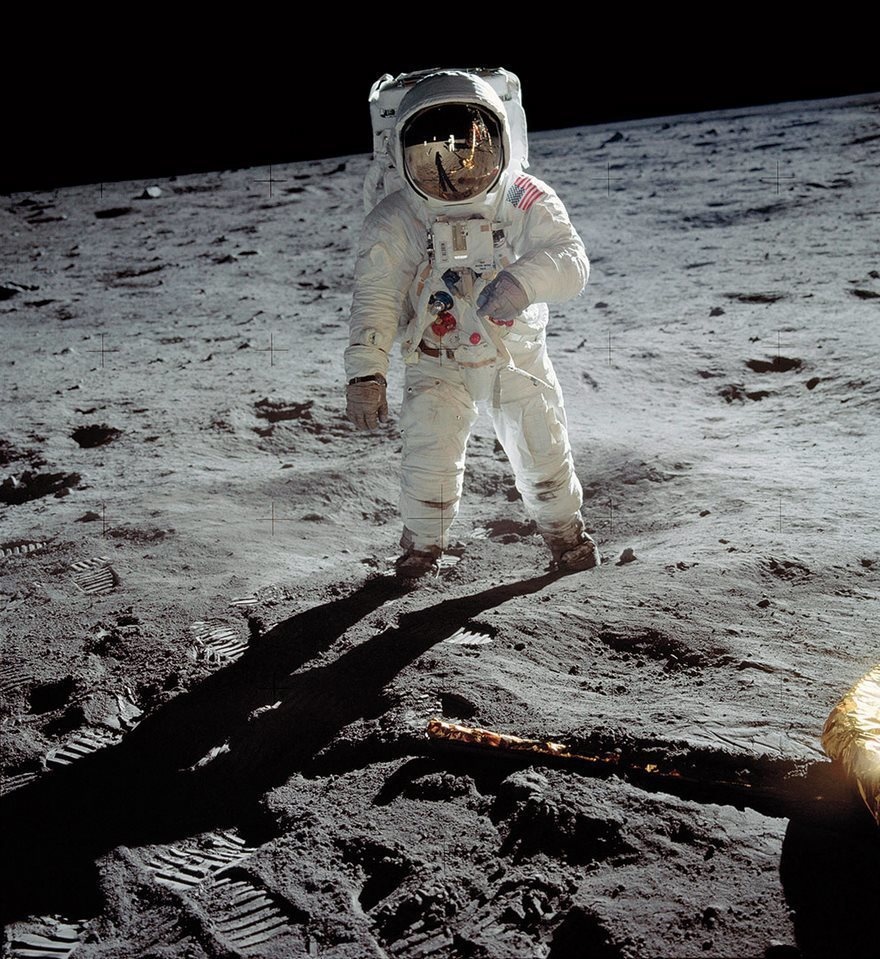 Neil Armstrong may have been the first man on the moon but he wasn’t alone—Buzz Aldrin, pictured here, was also there. If you look closely, you can catch a glimpse of Armstrong in his visor. 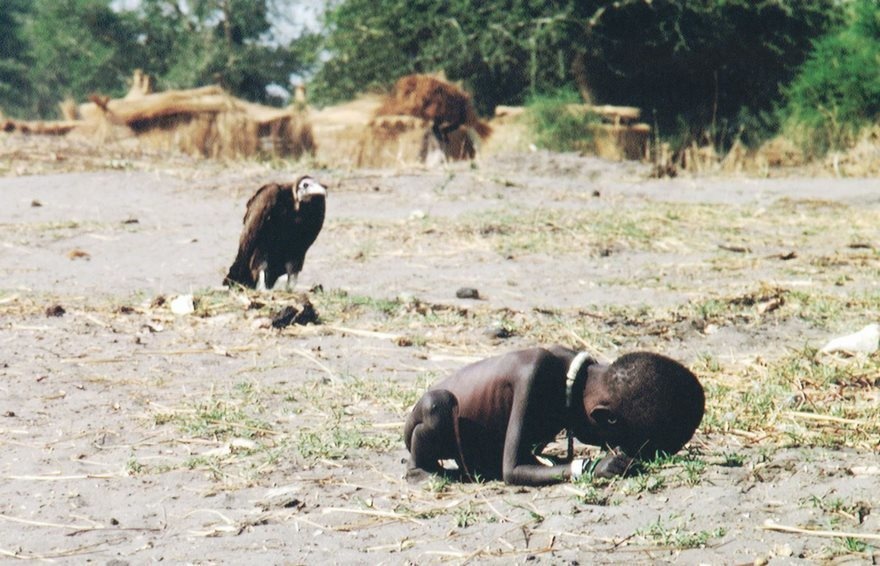 This photo is one of the most controversial photos ever taken. While the little girl was on her way to a United Nations feeding center in Sudan, the vulture eyed her for its next meal.