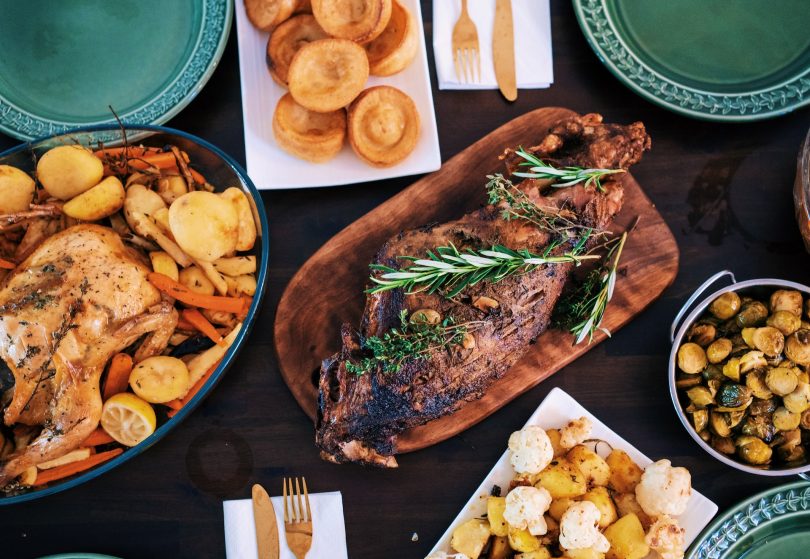 Christmas is a season of sharing love, gifts and goodies to celebrate the birth of Jesus. Christmas celebration is made more special with the delicious delicacies, which are prepared for this day. So, it’s the time to get into kitchen and put together some of the yummiest Christmas delicacies. Here goes, 31 dishes from destinations worldwide.

Scallops with herbs and cheese, served in little shells as an appetizer. Add that to the list of reasons to move to France.

This festive dish is comprised of meat-stuffed, fire-roasted poblano peppers covered in a creamy walnut sauce and a pomegranate seed garnish.

The Feast of the Seven Fishes (Italian: Festa dei sette pesci), also known as The Vigil (Italian: La Vigilia), is an Italian-American celebration of Christmas Eve with meals of fish and other seafood.

In Venezuelan cuisine, an hallaca is a version of the corn tamal stuffed with a stew of beef, pork, and chicken, fish or other seafoods in some places, and it is “adorned” with raisins, capers, olives and wedges of fowl meat.

Zakuski is a Russian term for hot and cold hors d’oeuvres, entrées and snacks, served before the main course. These appetizers are commonly served at banquets, dinners, parties and receptions in Russia and other post-Soviet countries.

This Brazilian Christmas turkey feast is unlike anything else, with a marinade made from champagne and spices.

Sachertorte is a specific type of chocolate cake, or torte, invented by Austrian Franz Sacher in 1832 for Prince Wenzel von Metternich in Vienna, Austria. It is one of the most famous Viennese culinary specialties.

Doro Wat on Injera is an Ethiopian and Eritrean stew or curry that may be prepared with chicken, beef, lamb, a variety of vegetables, spice mixtures such as berbere, and niter kibbeh, a seasoned clarified butter.

Ganong Bros., Limited is Canada’s oldest candy company. It was founded by James and Gilbert Ganong in 1873 in St. Stephen, New Brunswick, where it remains. Primarily a producer of boxed chocolates, it now provides many chocolates for Laura Secord stores.

Vitello tonnato is a Piedmontese dish of cold, sliced veal covered with a creamy, mayonnaise-like sauce that has been flavored with tuna.

Stollen or is a fruit bread containing dried fruit and often covered with powdered sugar or icing sugar. The bread is usually made with chopped candied fruit and/or dried fruit, nuts and spices.

Angel hair, called in Portuguese fios de ovos (“egg threads”) is a traditional Portuguese sweet food made of eggs (chiefly yolks), drawn into thin strands and boiled in sugar syrup. They are a traditional element in Portuguese and Brazilian cuisine, both in desserts and as side dishes.

Imbuljuta tal-Qastan is a traditional Maltese drink served after Midnight Mass and on New Year’s Eve. It is made using cocoa, chestnuts, cloves and citrus zest.

Carrot Box is a Finnish tradition of food that is eaten especially at Christmas , along with other Christmas foods. Carrot box contains the key ingredients are carrot and rice . In addition, it is often used in, for example, eggs , milk , salt , sugar , bread crumbs and butter . Food seasoned with the most commonly white pepper and nutmeg

Ciorba de perișoare is a Romanian traditional sour soup with meatballs. Perișoare are meatballs usually made with minced pork meat, mixed with rice and spices and boiled in a ciorbă.

Risalamande (also spelled as ris à l’amande and other variants, though risalamande is the only spelling authorized by Dansk Sprognævn from pseudo-French riz à l’amande meaning “rice with almonds”), is a traditional Danish dessert typically served at Christmas. Risalamande was created in the last part of the 19th century. It is made out of rice pudding mixed with whipped cream, vanilla, and chopped almonds; and is usually served cold with a cherry sauce

Hangikjöt is a traditional festive food in Iceland, served at Christmas.This Icelandic smoked lamb, mutton, or horse meat is usually boiled and served either hot or cold in slices, traditionally with potatoes in béchamel sauce and green peas, or in thin slices on bread such as flatkaka or rúgbrauð or Laufabrauð. It takes its name from the old tradition of smoking food in order to preserve it by hanging it from the rafters of a smoking shed.

A mince pie is a fruit-based mincemeat sweet pie of British origin that is traditionally served during the Christmas season in the English-speaking world.

Bibingka is a type of rice cake from the Philippines usually eaten during the Christmas season. It is traditionally cooked in clay pots lined with banana leaves.

Christmas traditions vary from country to country. Christmas celebrations for many nations include the installing and lighting of Christmas trees, the hanging of Advent wreaths, Christmas stockings, candy canes, and the creation of Nativity scenes depicting the birth of Jesus Christ. Christmas carols may be sung and stories told about such figures as the Baby Jesus, St Nicholas, Santa Claus, Father Christmas, Christkind or Grandfather Frost.

Avgolemono Chicken Soup with Rice. Avgolemono is a classic sauce of chicken broth, egg yolks and lemon juice; the addition of a bit more chicken broth, rice and shredded chicken turns it into a satisfying soup.

Janssons frestelse is a traditional Swedish casserole made of potatoes, onions, pickled sprats, bread crumbs and cream. It is commonly included in a Swedish Christmas smörgåsbord, but can be eaten on other occasions such as Easter.

A tamale (Spanish: tamal, Nahuatl: tamalli) is a traditional Mesoamerican dish made of masaa or dough(a starchy dough, usually corn-based), which is steamed in a corn husk or banana leaf. The wrapping is discarded before eating. Tamales can be filled with meats, cheeses, fruits, vegetables, chilies or any preparation according to taste, and both the filling and the cooking liquid may be seasoned.

The poppy seed roll is a pastry consisting of a roll of sweet yeast bread with a dense, rich, bittersweet filling of poppy seed. An alternative filling is a paste of minced walnuts, making it a walnut roll.

Chicken-coconut stew over rice is the perfect winter comfort food.

The spices and flavorings will now be mixed with the juices drawn from the beef. Tie up the meat firmly and place in a large pot. Rub in a last teaspoon of ground cloves. Cover with cold water to which a bottle of Guinness has been added.

Bigos, also known in English as hunter’s stew, is a Polish dish of finely chopped meat of various kinds stewed with sauerkraut and shredded fresh cabbage. The dish is also traditional for Belarusian and Lithuanian cuisine.

Simple and sweet, these easy to make shortbreads are a treat that will take you back to Christmas’s of your childhood–when you’d help your parents in the kitchen and notice as the smell of delicious treats filled the house.

Mulled wine is a beverage of European origins usually made with red wine along with various mulling spices and sometimes raisins. It is served hot or warm and may be alcoholic or non-alcoholic. It is a traditional drink during winter, especially around Christmas and Halloween.

Struffoli is a Neapolitan dish made of deep fried balls of dough about the size of marbles. Crunchy on the outside and light inside, struffoli are mixed with honey and other sweet ingredients.

Read More Posts On The Topic Of Christmas