The Chandrayaan 2 moon mission is scheduled to land on the lunar surface at 1:55 am on September 7. With this successful landing, India is going to create history by becoming the first nation to reach closest to the moon’s south pole.

Chandrayaan 2 mission will make India the fourth country after the US, Russia and China to pull off a soft landing on the moon.

The moon lander Vikram that separated from its orbiting mothership has already performed two manoeuvres to lower its altitude for a perfect touchdown between 1:30 am and 2:30 am on Saturday.

The region where the lander Vikram is heading on the moon that is little explored till date – most lunar landings have taken place in the northern hemisphere or in the equatorial region.

The rover Pragyan will roll out from the moon lander between 5:30 am and 6:30 am. It will carry out research, including a thorough mapping of the moon’s resources, looking for the presence of water and clicking high-resolution images as well.

The historic moment will be witnessed by Prime Minister Narendra Modi with 60 students from classes 8 to 10, who were selected through an online space quiz conducted by the team of Indian Space Research Organisation (ISRO) to increase awareness.

The Chandrayaan 2 lifted off from its launch pad at Andhra Pradesh’s Sriharikota on July 23 on board the giant heavy-lift rocket GSLV Mark 3.

India’s space scientists had a narrow one-minute window for their second attempt at launching the moon mission, a week after the mission was aborted 56 minutes before lift-off. 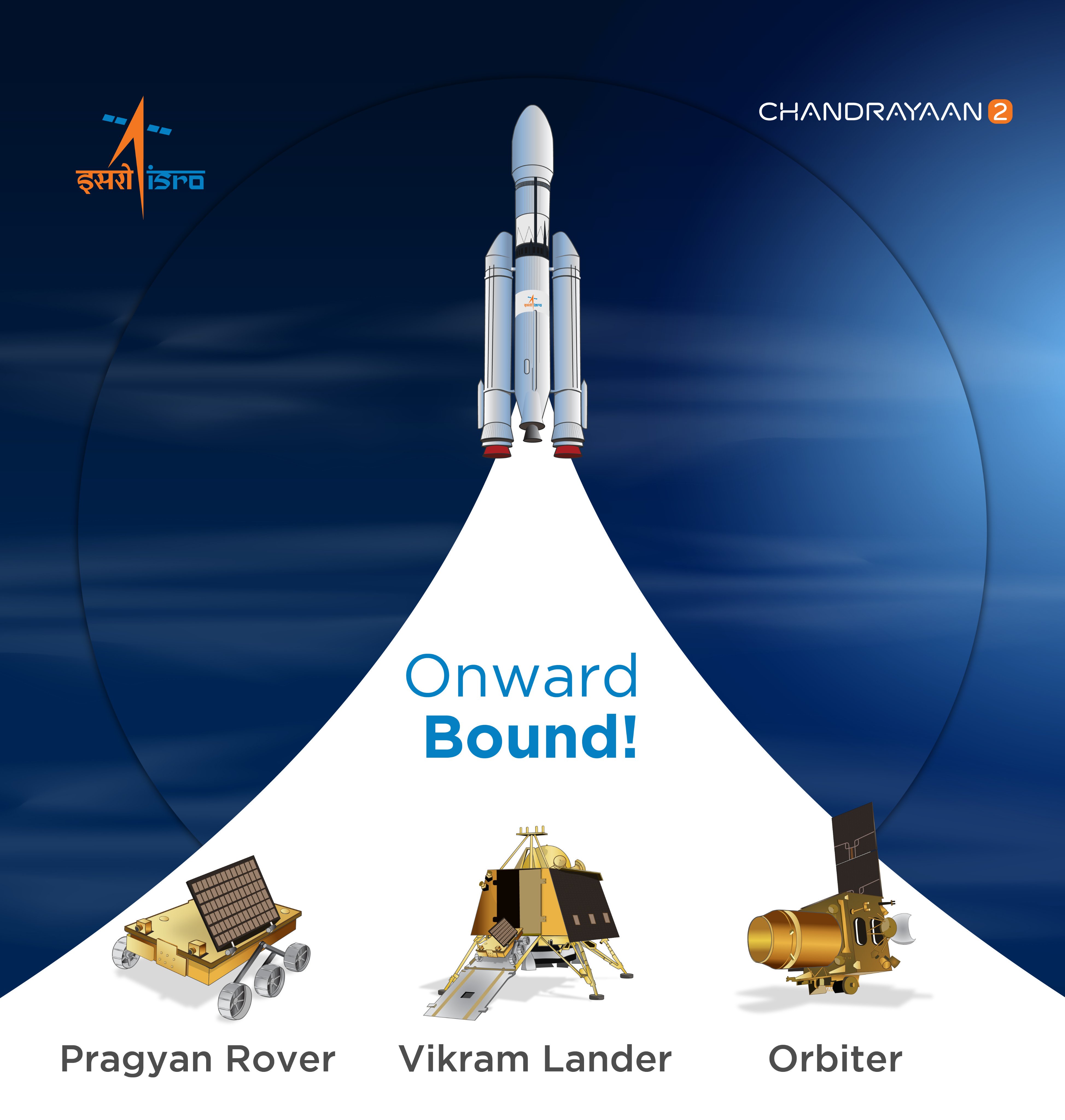 2. Chandrayaan-1 was the first Indian lunar probe under Chandrayaan program. It was launched by the Indian Space Research Organisation in October 2008, and operated until August 2009. The mission was a major boost to India’s space program as India researched and developed its own technology in order to explore the Moon.

3. Chandrayaan 2 will be India’s first soft landing on the surface of the moon and also the first spacecraft to land near the moon’s South Pole. Chandrayaan-2 is:

Why are countries across the world investing their resources to reach the Moon’s South Pole? Read on to find out. #Chandrayaan2 #ISRO #MoonMission pic.twitter.com/NHdcjsDKCL

4. Chandrayaan-2 consists of three components: the Orbiter, the Lander (Vikram) and the Rover (Pragyaan).

We have the same wishes for Vikram, Orbiter.
Want to stay in touch with Vikram and Pragyan as they make their way to the untouched lunar South Pole and uncover its many mysteries? Then keep an eye out for the next edition of #CY2Chronicles! pic.twitter.com/2iA8W2lxtR

5. The Lander of Chandrayaan 2 is named Vikram after Dr Vikram A Sarabhai, the Father of the Indian Space Programme.

How Well Do You Know The Chandrayaan-2 Mission? Take Our Chandrayaan 2 Quiz

8. On August 14. 2019, Chandrayaan 2 left the Earth’s orbit and began its journey towards the Moon. It entered the lunar orbit sucessfully on August 20, 2019 through Lunar Orbit Insertion (LOI) manoeuvre.

9. After the fifth and final Lunar-bound orbit manoeuvre on September 1, 2019, the Lander separated from the orbiter and carried out two de-orbiting manoeuvres before descending to the moon.

11. Chandrayaan-2 will increase our understanding of space, stimulate the advancement of technology, promote global alliances, and inspire a future generation of explorers and scientists.

12. Chandrayaan-2 has several science payloads to expand the lunar scientific knowledge through a detailed study of topography, seismography, mineral identification and distribution, surface chemical composition, thermo-physical characteristics of topsoil and composition of the tenuous lunar atmosphere.

13. Chandrayaan 2 Large Area Soft X-ray Spectrometer or CLASS will measure the Moon’s X-ray Fluorescence (XRF) spectra to examine the presence of major elements such as Magnesium, Aluminium, Silicon, Calcium, Titanium, Iron, Sodium, and its XRF technique will detect these elements by measuring the characteristic X-rays they emit when excited by the Sun’s rays.

14. Chandrayaan 2’s Solar X-ray Monitor (XSM) will observe the X-rays emitted by the Sun and its corona, measure the intensity of solar radiation in these rays, and support CLASS.

16. The Chandrayaan-2 mission is a precursor to the ambitious Gaganyaan project, which aims to place three Indians in space by 2022.