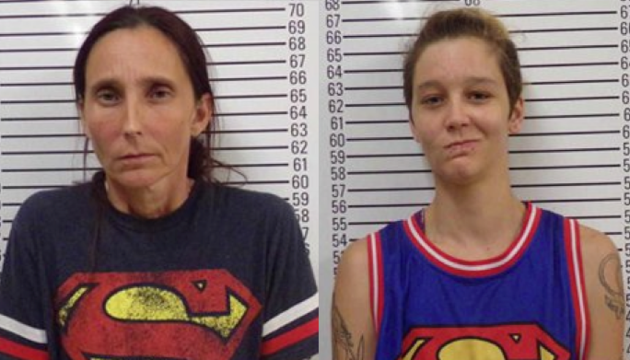 Charged with incest, a mother and her adult daughter were arrested after “legally” marrying each other in Oklahoma, the Associated Press reports.

Patricia Ann Spann, 43, and Misty Velvet Dawn Spann, 25, tied the knot in Oklahoma. The mother had married her son a few years earlier, who filed for an annulment 15 months later citing “incest,” stating he was married to his birth mother, according to the affidavit.

Under Oklahoma law, marrying a close relative is considered incest whether or not a sexual relationship exists. According to the AP, Patricia told a child services investigator that she’d lost custody of her children and that they were adopted by their grandmother. According to a police affidavit, Patricia reunited with her daughter, 25, and claimed that she thought the marriage was legal because her name isn’t listed on her daughter’s birth certificate.

In one other incidence, Police in Asheville, North Carolina, arrested a 45-year-old woman and charged her with having an illegal sexual relationship with her own 25-year-old son.

It might go without saying, but incest is illegal in nearly every state in the United States. The term Genetic sexual attraction (GSA) was coined in the US in the late 1980s by Barbara Gonyo, the founder of Truth Seekers In Adoption, a Chicago-based support group for adoptees and their new-found relatives. Genetic sexual attraction (GSA) is sexual attraction between close relatives, such as siblings or half-siblings, a parent and offspring, or first and second cousins, who first meet as adults. Relatives who fail to form the family bonds which create a natural taboo around sexual bonding, are said to be at risk of interpreting intense familiarity as sexual attraction. Gonyo reported feeling overwhelmingly attracted to her own estranged son upon meeting him later in life. However, her son’s unresponsiveness towards her attraction meant she never acted on it.