I am delighted to nominate the following for the #FitnessChallenge:

India’s pride and among the highest medal winners for India in the 2018 CWG, @manikabatra_TT.

The entire fraternity of brave IPS officers, especially those above 40.

The video shows him meditating, walking on a track inspired by five elements of nature, and doing yoga exercises, on what appears to be the lawns of his 7, Lok Kalyan Marg residence.

Karnataka CM H D Kumaraswamy accepted the challenge but in a sardonic reply to the Prime Minister retorted that he is more concerned about the fitness of his state and his state would need the centre’s cooperation.

Dear @narendramodi ji
I am honoured& thankU very much for d concern about my health
I believe physical fitness is imptnt for all&support d cause. Yoga-treadmill r part of my daily workout regime.
Yet, I am more concerned about devlpment fitness of my state&seek ur support for it.

PM Modi had also tweeted: “Here are my morning exercises. Apart from Yoga, I walk on a track inspired by the Panchtatvas or 5 elements of nature – Prithvi, Jal, Agni, Vayu, Aakash. This is extremely refreshing and rejuvenating. I also practice breathing exercises. #HumFitTohIndiaFit”.

Here are moments from my morning exercises. Apart from Yoga, I walk on a track inspired by the Panchtatvas or 5 elements of nature – Prithvi, Jal, Agni, Vayu, Aakash. This is extremely refreshing and rejuvenating. I also practice
breathing exercises. #HumFitTohIndiaFit pic.twitter.com/km3345GuV2

Modi had then replied on Twitter that he will soon upload his fitness video. “Challenge accepted, Virat! I will be sharing my own #FitnessChallenge video soon,” the PM had written in May in reply to Kohli’s challenge.

As the fourth International Yoga Day will be celebrated on June 21, PM Modi has been sharing his love for yoga on social media. 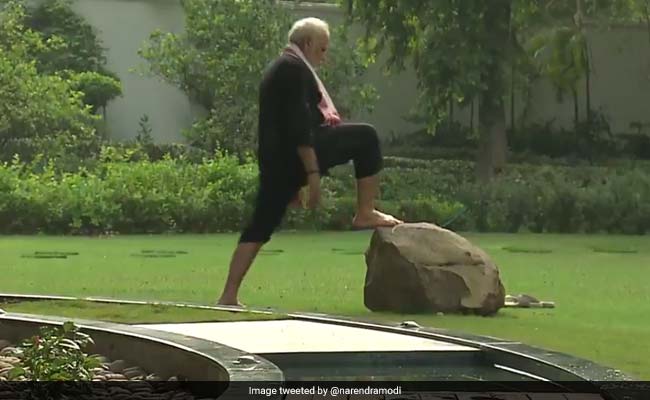 In 2015, India created two world records on International Yoga Day when PM Modi led the participants at Rajpath in Delhi and recorded the largest yoga class with 35,985 people.

Sharing a video on Nadi Shodhan Pranayam. Have a look and make it a part of your lives. Practising it daily will bring calm and positivity in your life. #4thYogaDay pic.twitter.com/3UJWZpDCBU