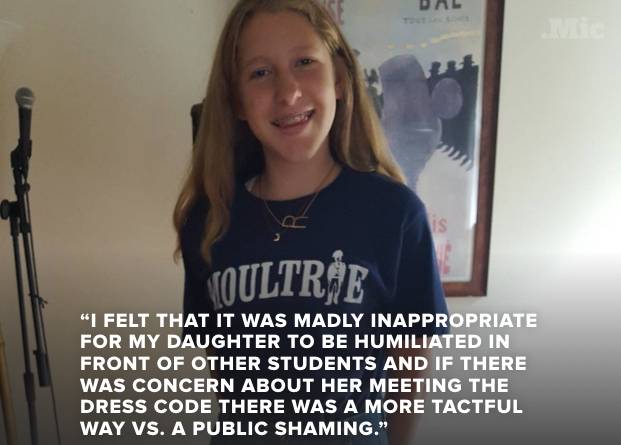 A girl pulled out of class and shamed because her outfit was deemed inappropriate by her school. Her teacher said that it looked more like it was for “clubbing.” The girl in question, Reese Franyo, is just 12 years old.

Recalling  the ordeal in detail in her Facebook post, which has gone viral, Suzie Webster, Reese Franyo’s mother, explained how her daughter was pulled out of class and then humiliated in front of her peers.

“I found out that Reese was called out in the hallway surrounded by other kids and told to go to the office because her skirt was too short and needed to be replaced,” Webster wrote. “Also, the teacher told her she looked like she should ‘be clubbing.’ What? I don’t know too many women who wear a boxy T-shirt and an A-line preppy denim skirt to go clubbing.”

I felt that it was madly inappropriate for my daughter to be humiliated in front of other students and if there was concern about her meeting the dress code there was a more tactful way vs. a public.

While Reese was changing, her Principal, Mr. Cumberback started to explain to me that it was necessary to closely monitor the girls attire because boys at this age get very distracted by the girls and their appearance. So in order to control this, they needed to make sure the skirts were long enough etc. WTH?! This is the exact problem with society today.

I understand there has to be a line, but shouldn’t the emphasis be on teaching our sons to be gentlemen and focus on their school work, not how much skin our daughters are showing?It really is hard enough to raise girls to have positive self esteem and a good body image without worrying that they are being shamed by their teachers and administrators. Everyone has different body shapes and it is sad to think that girls who may be more developed are called out because of how they look in their clothes, this is just plain wrong. Please Share.

Would you like to make comments on such incident still happening in 2016? Please share your comments below.