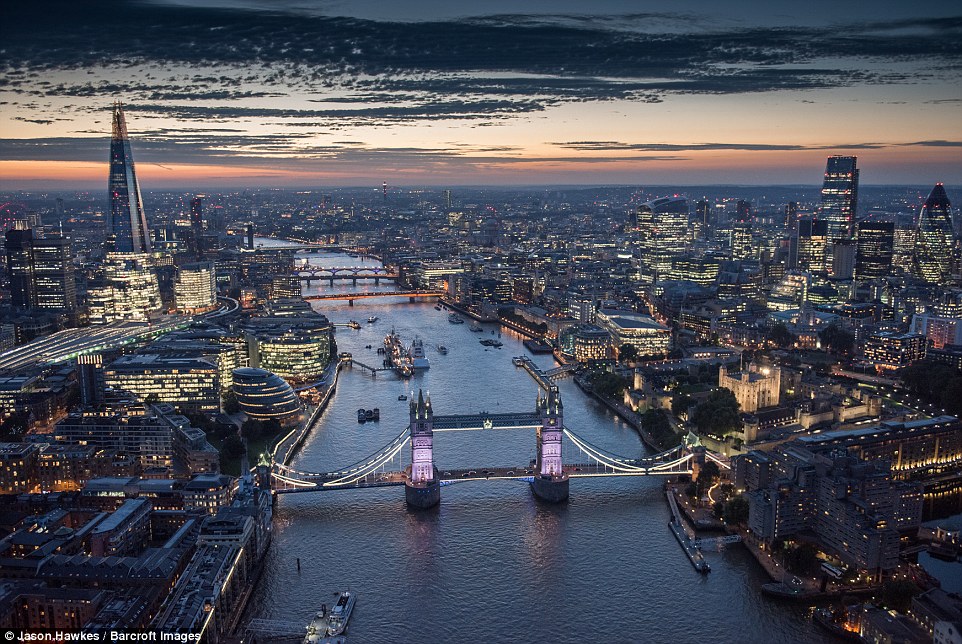 Can you guess where in London some of these striking aerial photos were taken? Showcasing some familiar places around the capital in an entirely different way, at first glance the images taken by Jason Hawkes can be tricky to pinpoint.

These stunning photographs captured reveal a side of London that few get to see with such clarity. They feature some of the UK capital’s most famous skyscrapers and landmarks, all photographed in the last year.

One shows a circular building under heavy construction. It offers a unique view of the BBC Television Centre, which is more usually seen from the front.

The Oxfordshire-based photographer has been shooting aerial views for over 20 years, capturing some of the world’s most famous cities, but London is perhaps his most photographed city.

These spectacular aerial images taken by Jason Hawkes reveal a side of London that few get to see with such clarity. Above, a view of Lord’s cricket Ground showing hundreds of spectators sitting in the sunshine 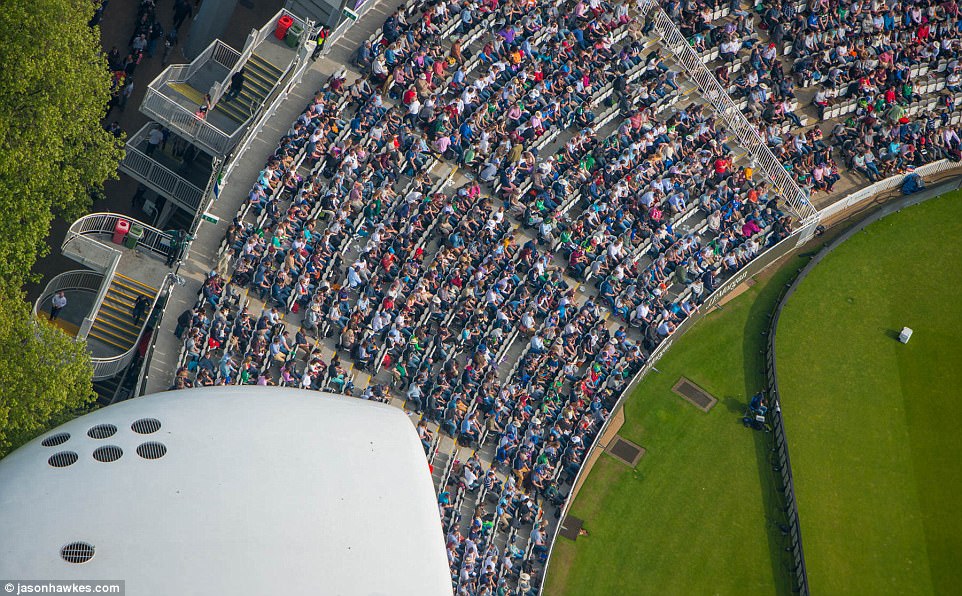 Hawkes has been taking aerial photographs for the last 20 years. Above, excavation for the new Edwardian Hotel in Leicester Square 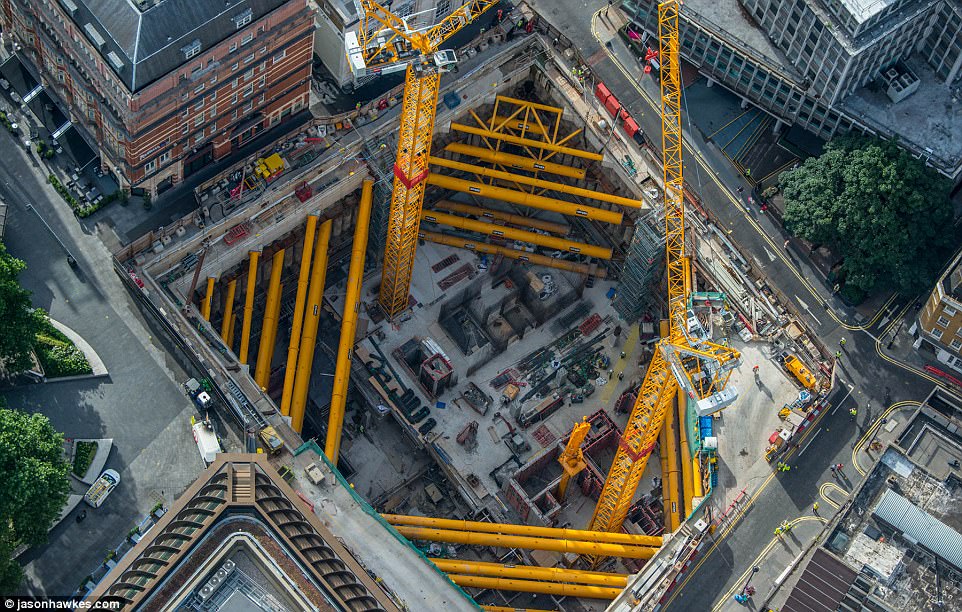 In order to take the aerial photographs, Hawkes has to lean out of the window of a helicopter while strapped into the passenger seat. Above, an aerial view of trains at the newly renovated London Bridge 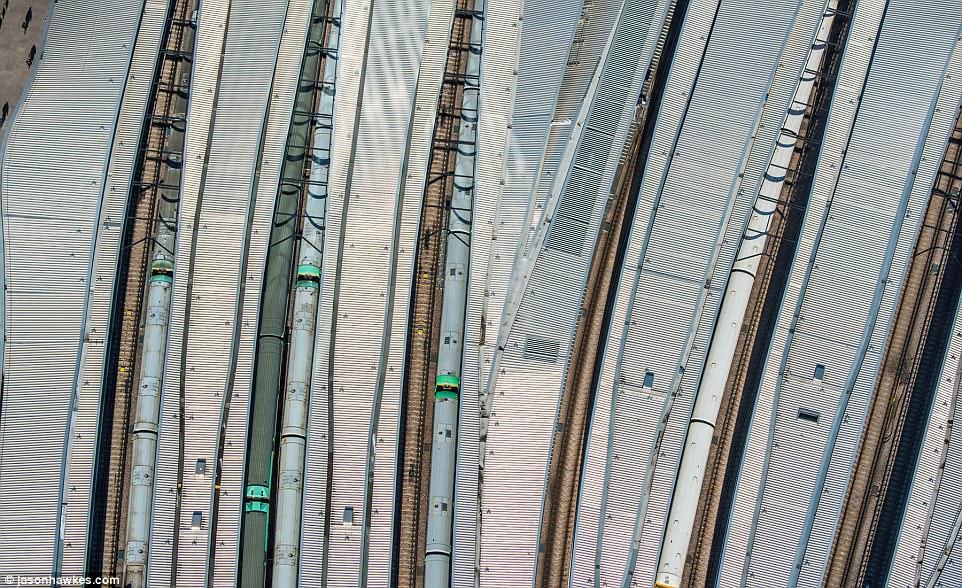 I particularly like shooting just after dusk when the city looks incredibly dramatic.’ Above, the BBC Television Centre in White City, which is now being developed into homes and offices 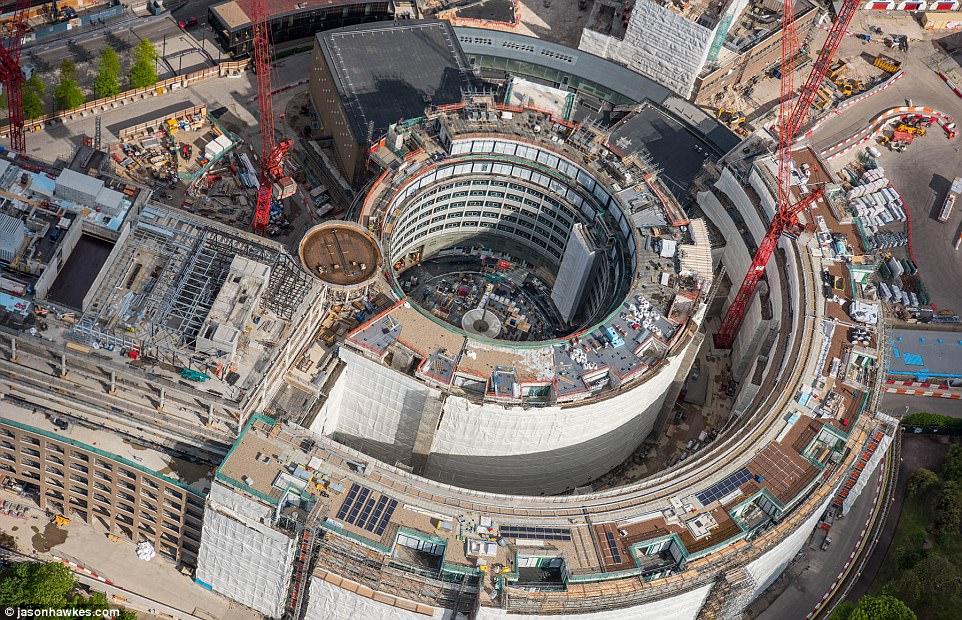 The veteran photographer has captured cities all over the world but London remains one that he’s worked the most in. Above, the River Thames meandering past the Shard and the Isle of Dogs to City Airport and beyond 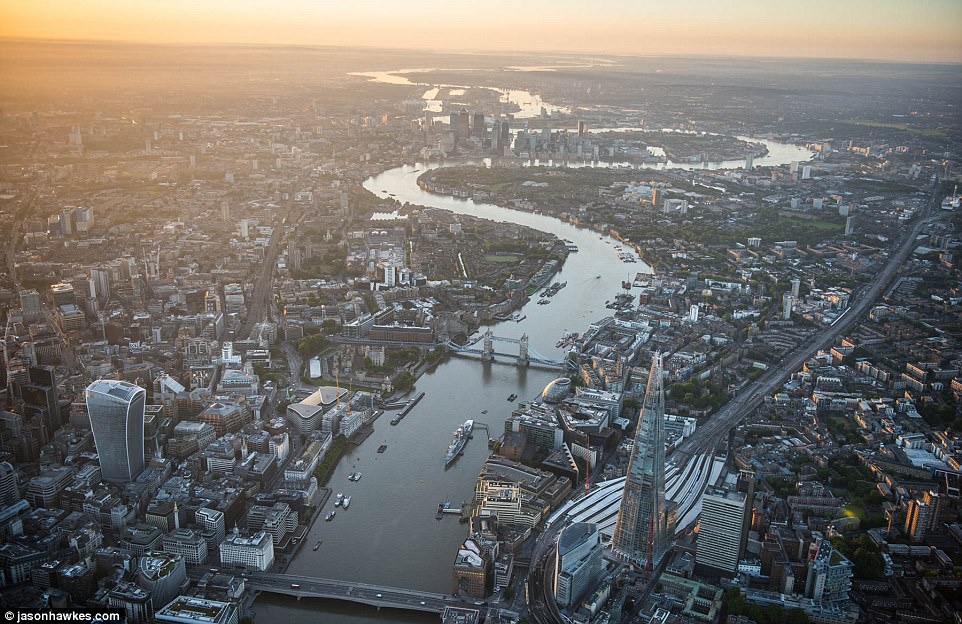 Hawkes’s photographs capture some of London’s most iconic spots. Justin Bieber is pictured above performing to a packed crowd at Hyde Park 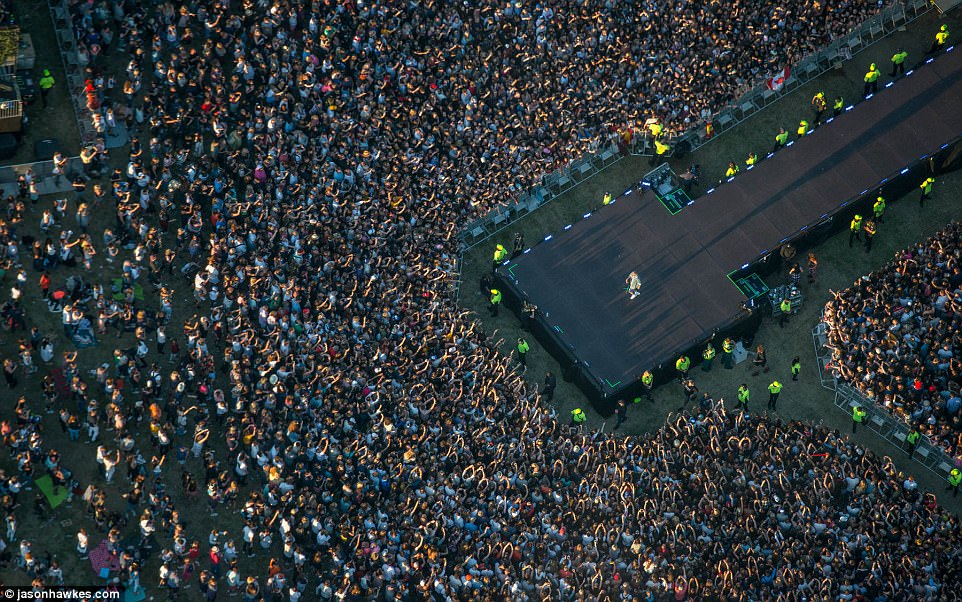 All of Hawkes’s images are taken from a twin-engined AS355 helicopter, which takes him to altitudes of between 750ft and 2,500ft. Above, Central Saint Giles, designed by the Italian architect Renzo Piano 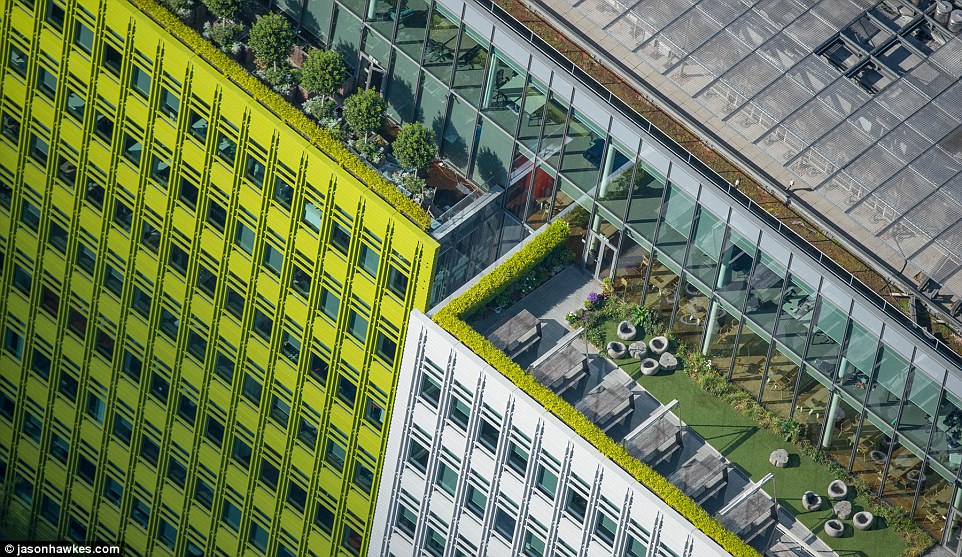 The Oxfordshire-based photographer says he likes London’s diversity. Above, people on top of Primrose Hill 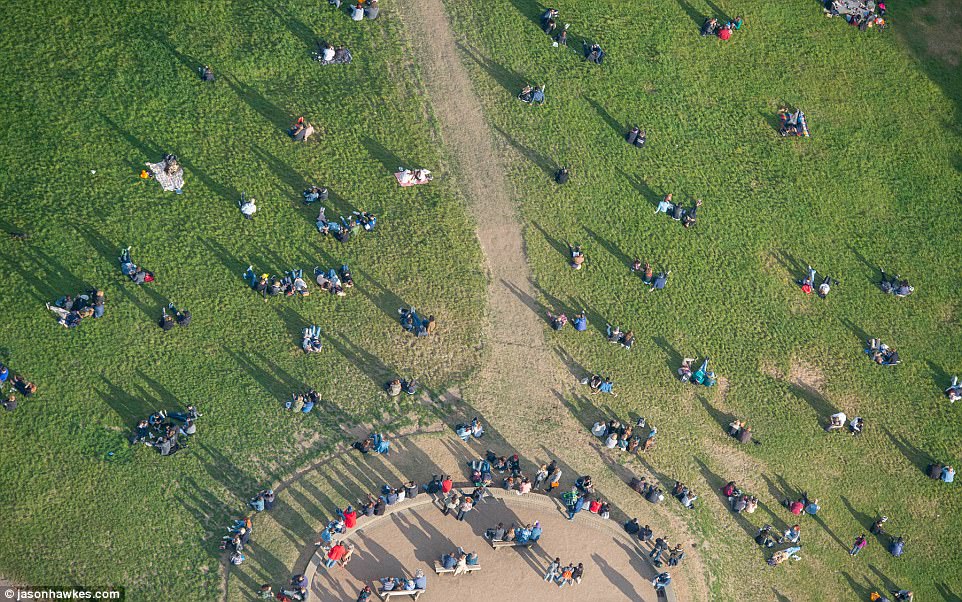 Pictured above are the city skyscrapers Fenchurch St, The Scalpel, The Leadenhall Building, The Gherkin and Tower 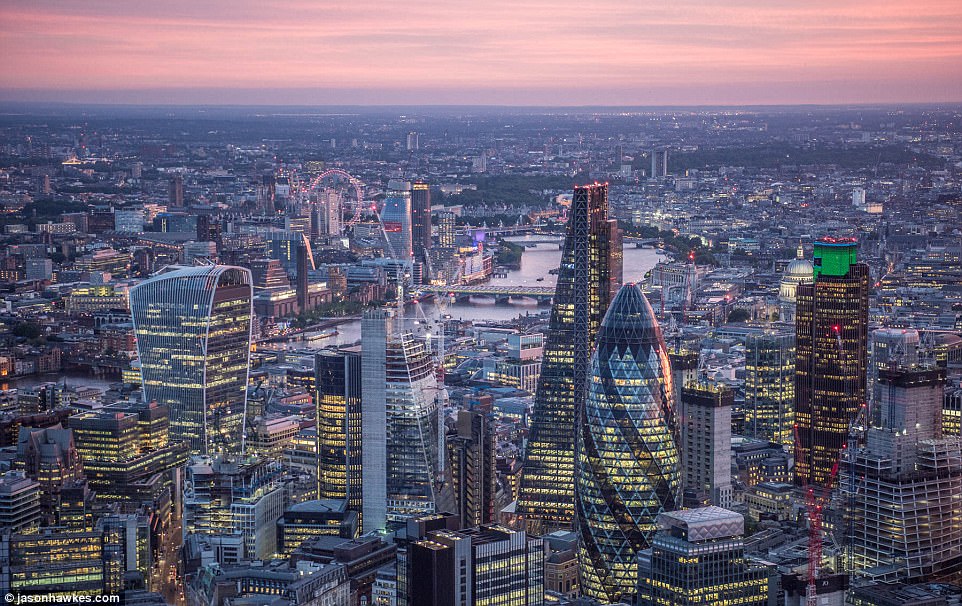 Few have the opportunity to see London like Hawkes. Above, over the West End with Centre Point in the foreground, looking to the City of London 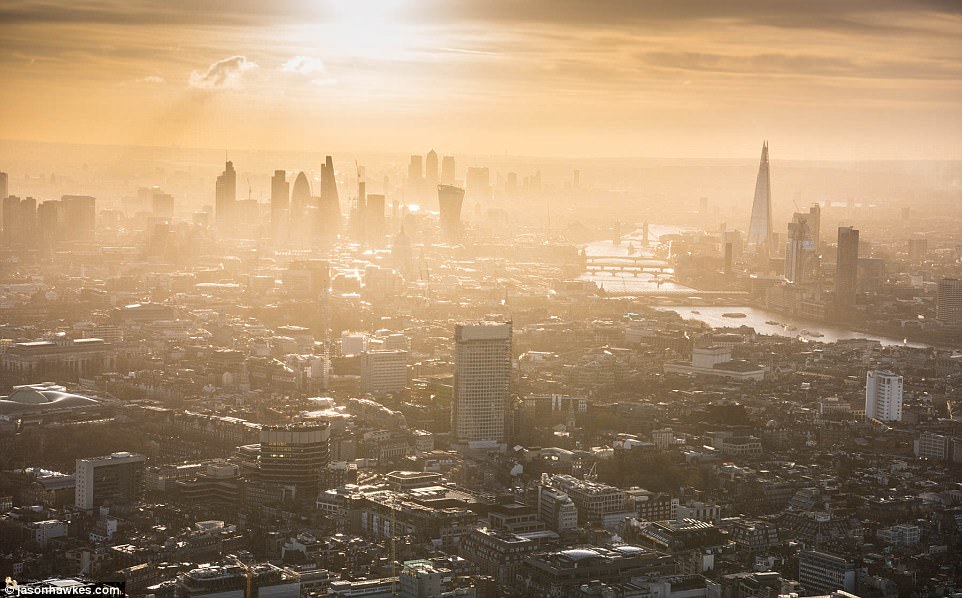 Each shoot takes a day or two to plan but if Jason needs to get below 500ft, it can take a little more time to organise the permits. Above, dawn over the South Bank 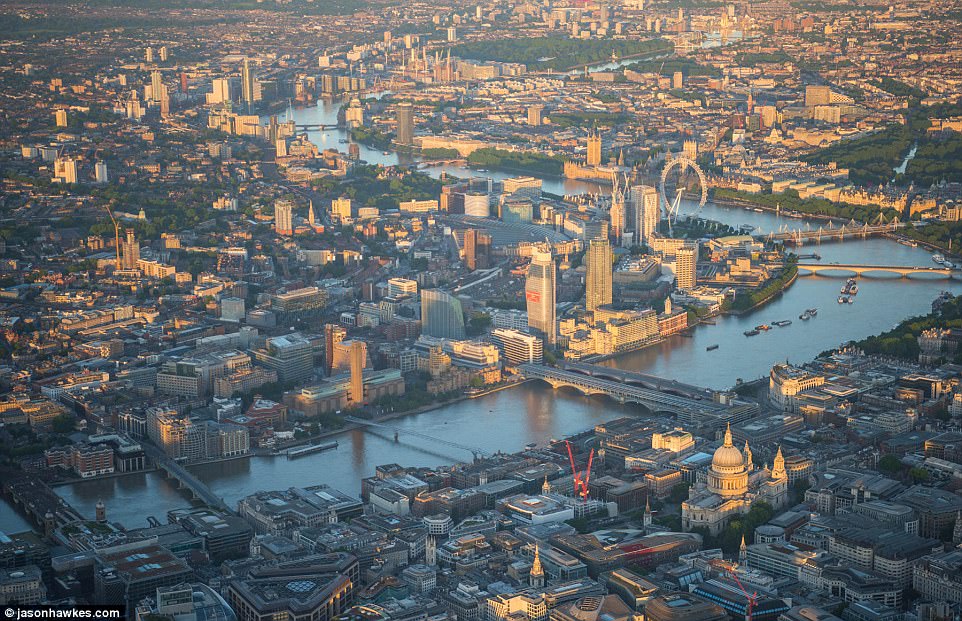 According to the photographer, the London skyline is amazing and the new skyscrapers add rather than subtract from it. Above, the Isle of Dogs and River Thames at sunset 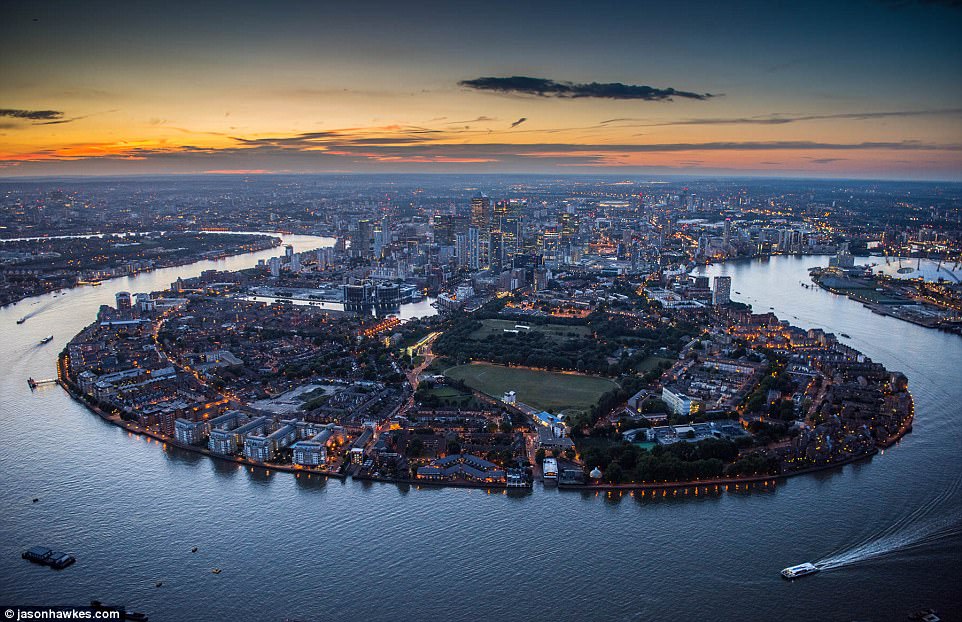 Hawkes has flown as low as 400ft over the river Thames. Above, a shot of the City of London showing construction of new skyscrapers 22 Bishopsgate and 100 Bishopsgate 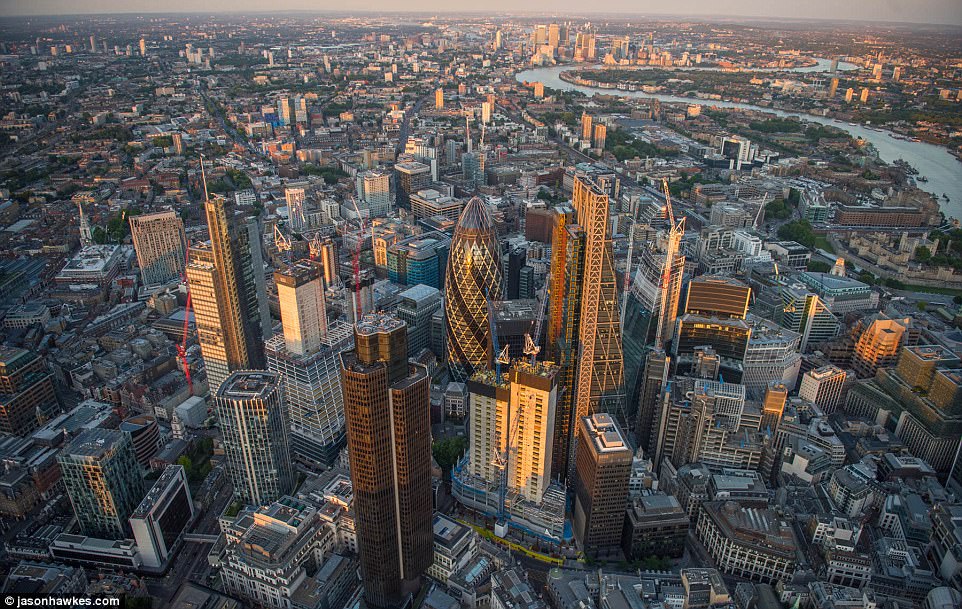 A dusk view of the Walkie Talkie Tower and The Gherkin

The Shard after sunset

The Berkeley Hotel in Knightsbridge and its new entrance

A  close up view of 30 St Mary Axe, also known as The Gherkin

The Shard and the Thames

Apartments being constructed in old gasometers in Kings Cross