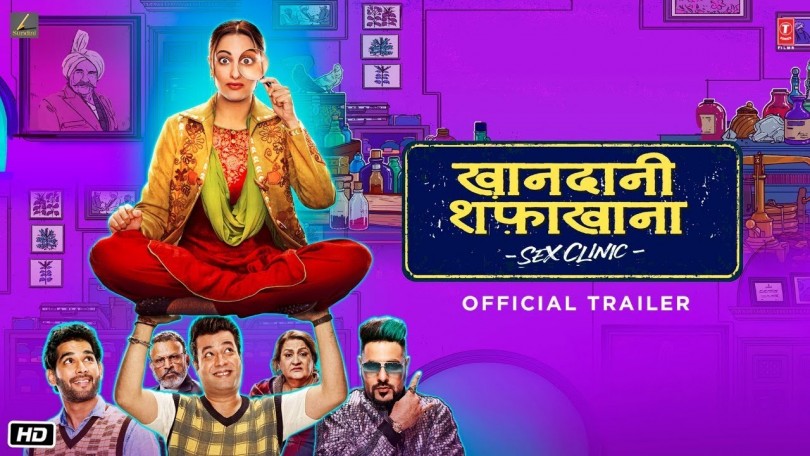 A feisty girl from Punjab, tries to continue her family traditions by opening a sex clinic to help and create awareness in her hometown.

Baby Bedi is a quick-witted small-town Medical Representative from an orthodox Punjabi family; despite her earnest efforts, her modest income never matches up to the mounting bills, resulting in multiple loans & creditors knocking at the family door constantly.

One day, she is presented with a unique opportunity. She must choose between her utterly ordinary life or bail her family out of their perennial money crunch by selling off an infamous Clinic which she inherits from her estranged uncle.

The “catch” though is the rather unusual conditions he has laid out in his WILL. What follows is the no-holds-barred journey of a girl in a hush-hush world. Along this hilarious journey, this small town girl will break taboos, open hearts and ultimately, minds.

A little girl, five-six years old, tells a man, “Uncle six nahi, theek se likho sex.” She then loudly utters the taboo word sex in her innocent voice. Her audaciousness is met by an angry mother, who blasts her and takes her away from her Mamaji, a hakim who treats sex-related diseases.

After years, that little girl, who is now a grown woman and, mind it, the sole breadwinner of her house, ends up in the shoes of her late Mamaji and has been thrust upon the task to run his sex clinic.

She soon realises that though years have passed, the squirmy reaction of people to the word ‘sex’ remains intact. But, like a true Bollywood heroine, she takes it upon herself to change the world and start a conversation about this hush-hush subject.

For most part of the film, the characters just beat around the bush, which involves everything from uneasy expressions, nose flares to khandan ka naam dooba dia talks but they don’t get to the talk till you reach the late second half of the film.

Sexual dysfunctions in India are grouped under the title ‘Gupt Rog’ which has the unfortunate effect of making patients sound traumatised by the knowledge of Kajol being the killer and it is indeed peculiar that we continue to assign such shame and secrecy to any sexual problem.

With few people going to actual sexologists, phrases used by practitioners of sex clinics (as well as hucksters on the street) sound weirdly astrological as opposed to medical: those with very low motility are said to suffer from Nil Shukranu, for instance.

The film has some smashing lines a street-side faker promises a client “Ab Tu nahin, teri khabrein aayengi,” telling him that now the huckter won’t hear from the client but instead hear only stories of his exploits and there are fun actors in smaller parts.

Annu Kapoor stars as a stern lawyer who is also part Captain Haddock (hearing the word “dunderheads” in a Punjabi accent is something I won’t soon forget), he’s opposed by an interestingly floppy haired lawyer played by Arun Johra, and Rajesh Sharma shows up as a judge rightfully amused by all the cacophony.

The film culminates in an amusing courtroom free-for-all where the transcriptionist asks the judge if he should leave in the bits about sex. That’s where Sharma, still laughing, gets briefly real as he says of course not. Sad but true.

How the film has turned out must redound in large part to the credit of Sonakshi Sinha. She carries the film on her shoulders with impressive composure, in the bargain etching out a character who, notwithstanding the improbable turn of events in her life, never ceases to be believable and completely convincing.

The character-driven, female-centric film looks erectile dysfunction, premature ejaculation and low sperm motility in the eye although the characters, all men, who suffer from these and other sexual disorders are sheepish and secretive about making a clean breast of their problems until a woman who defies gender barriers and chips away at the taboos and inhibitions.

The brand of humour that Khandaani Shafakhana banks upon is never unduly indecorous although the mirth that the film generates stems primarily from hush-hush and tangential references to sex, or the lack of it, by a pehelwan, a priest, a printing press owner and a swaggering pop star, a quartet of patients who swear by the healing powers of the deceased Hakim Tarachand (Kulbhushan Kharbanda) and are determined to continue the same line of treatment.