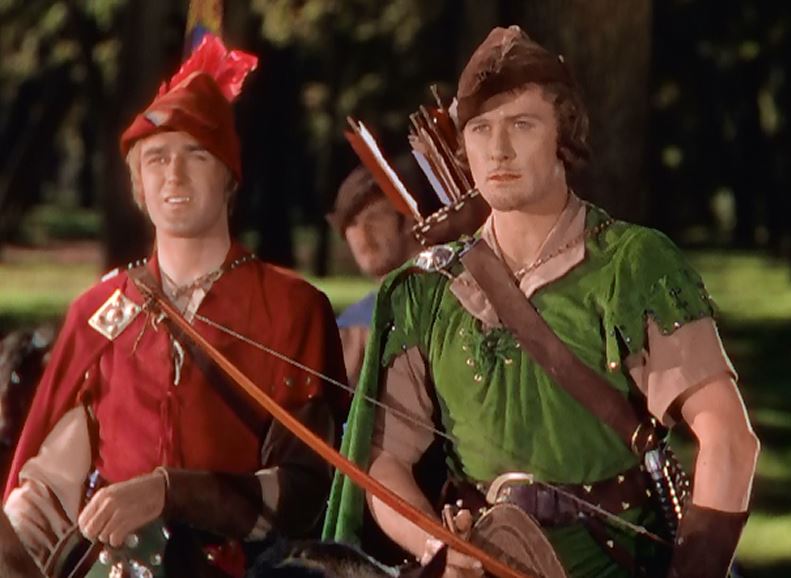 Sir Robin of Locksley, defender of downtrodden Saxons, runs afoul of Norman authority and is forced to turn outlaw. With his band of Merry Men, he robs from the rich, gives to the poor and still has time to woo the lovely Maid Marian, and foil the cruel Sir Guy of Gisbourne, and keep the nefarious Prince John off the throne.

Watch Trailer Of Movie “The Adventures Of Robin Hood” Here

This 1938 film, more than any other, epitomized Warner Brothers’ supremacy in the production of rousing, elaborately staged, immaculately costumed adventures. Photographed in glowing Technicolor by Warners’ most proficient cameramen (Sol Polito and Tony Gaudio), lavishly designed by Jules Weyl, and directed by two of the studio’s most popular hacks (Michael Curtiz and William Keighley), the film starred Errol Flynn at his peak, Olivia de Havilland, Basil Rathbone, Claude Rains, Eugene Pallette, and Alan Hale. Movies like this are beyond criticism.

“The Adventures of Robin Hood” was made with sublime innocence and breathtaking artistry, at a time when its simple values rang true. In these cynical days when swashbucklers cannot be presented without an ironic subtext, this great 1938 film exists in an eternal summer of bravery and romance. We require no Freudian subtext, no revisionist analysis; it is enough that Robin wants to rob the rich, pay the poor and defend the Saxons not against all Normans, only the bad ones “It’s injustice I hate, not the Normans”.

The movie involved a couple of firsts: The first Warner Bros. film shot in the three-strip Technicolor process, and the first of 12 times Flynn would be directed by Michael Curtiz. It was the fifth of eight films that Errol Flynn and Olivia de Havilland would make together.

The story of Robin Hood is one that has been told many times in cinema but never with as much panache as in this 1938 classic. Errol Flynn, at the height of his powers, plays the titular hero with an unmatched swagger and there’s plenty of swordplay and derring-do as he takes on Basil Rathbone’s malevolent Guy of Gisbourne. The Russell Crowe version may arguably be more realistic but this is a lot more fun.

Robin finds himself in exile due to the dodgy dealing of Prince John (Claude Rains), who usurps the throne after his brother goes missing in the Crusades. Fortunately for him, he’s made a good impression on the peasants in the area, so despite his noble heritage they show him support and he makes his home in Sherwood Forest, a notoriously difficult place for the authorities to control.

There he takes up the hobby of robbing the rich and giving to the poor, getting along merrily until, one day, the caravan he robs turns out to have Olivia de Havilland’s Maid Marian in its midst (riding Trigger, the horse who would go on to make Roy Rogers a star). Marian despises him for the criminal her is, but her experiences in her camp change her mind. When the two develop feelings for each other and she has to return to the castle, the stage is set for an altercation.