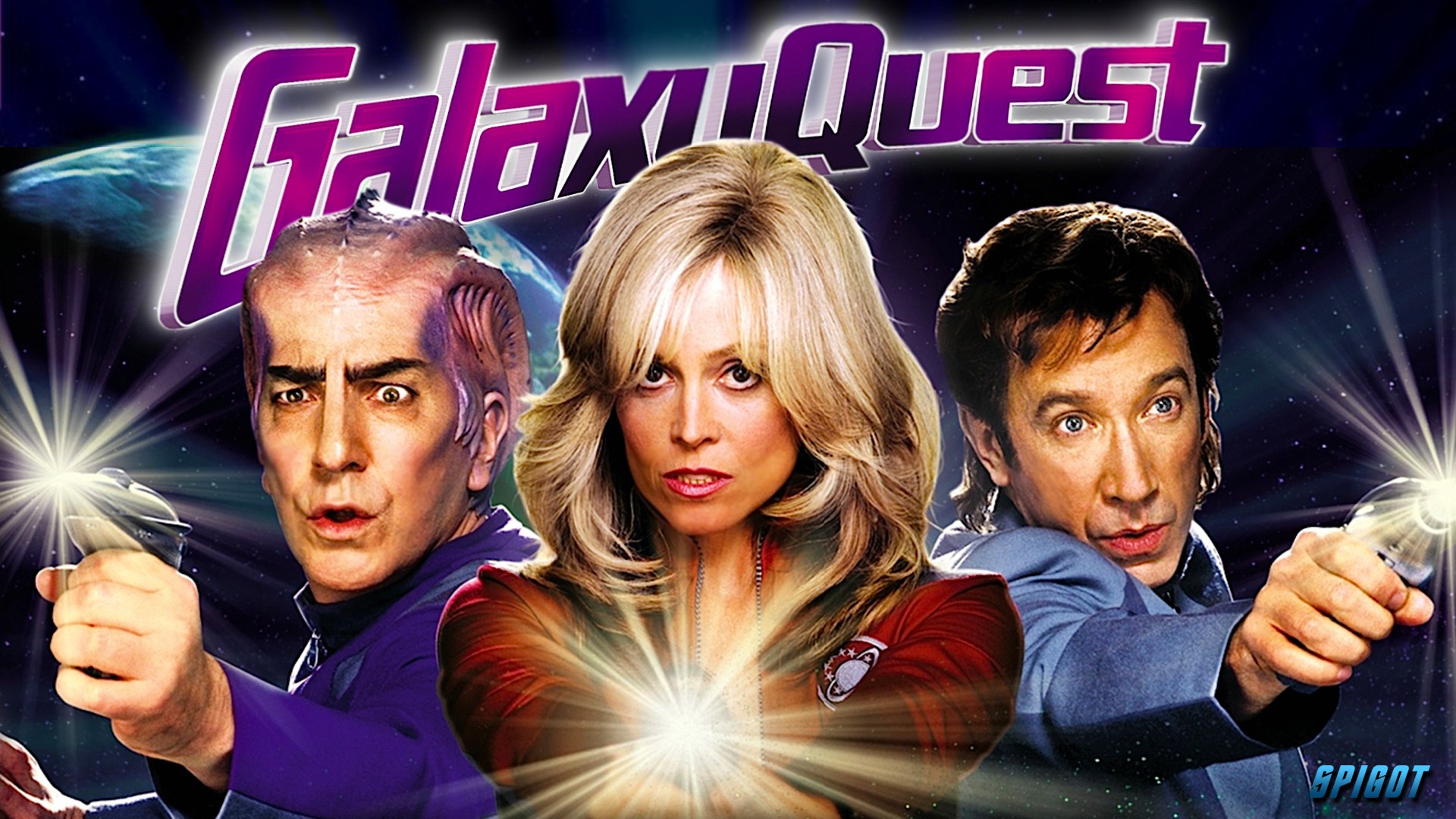 For four years, the courageous crew of the NSEA protector set off on a thrilling and often dangerous mission in space…and then their series was cancelled! Now, twenty years later, aliens under attack have mistaken the Galaxy Quest TV transmissions for “historical documents” and beam up the crew of has-been actors to save the universe.

The sci-fi adventure series “Galaxy Quest” took place aboard the intergalactic spaceship NSEA Protector. Eighteen years after their series was canceled, actors Jason Nesmith, Gwen DeMarco, Sir Alexander Dane, Tommy Webber and Fred Kwan are making appearances in costume and character at sci-fi conventions and electronic store openings. They are wallowing in despair and at each other’s throats until aliens known as Thermians arrive and, having mistaken the series for reality and consequently modeling their entire culture around this, take them into outer space to save them from the genocidal warlord General Sarris. 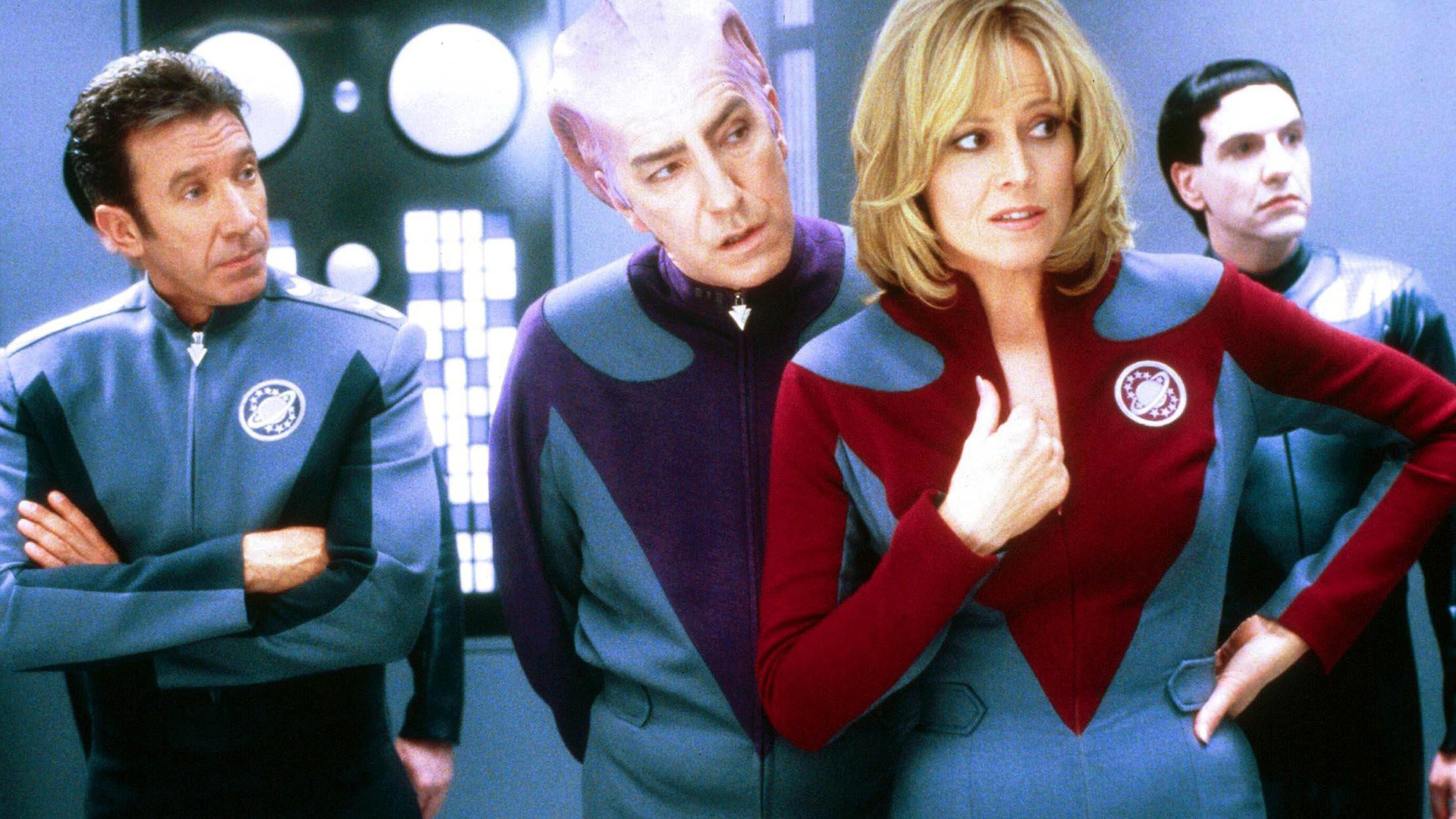 1999, the year that Galaxy Quest came out, was at the waning end of Peak Star Trek, which is perhaps why DreamWorks SKG thought that a mainstream family-oriented sci-fi comedy founded on an in-depth love/hate relationship with Star Trek, its stars, and its fandom might be a good box office play. That, and 1999 was also the waning end of a period when big-budget effects-driven comedies were at least somewhat commonplace (I allow myself to hope that the extravagant success of Guardians of the Galaxy will help bring this long-dead subgenre back).

DreamWorks’s faith was misplaced; Galaxy Quest didn’t tank, but it didn’t end up making anything like a decent profit. We can all come up with reasons why that would have happened – an overestimation of the general audience’s affection for Trekkies, the late decision in post-production and marketing to gun for a family audience and so rip out everything even slightly dark or edgy – but the last place I’d lay the blame is at the foot of the movie itself. It’s a little fuzzy around the edges, and filmed with proficiency but little imagination by director Dean Parisot (a TV veteran making only his second feature, which cuts both ways for the movie: 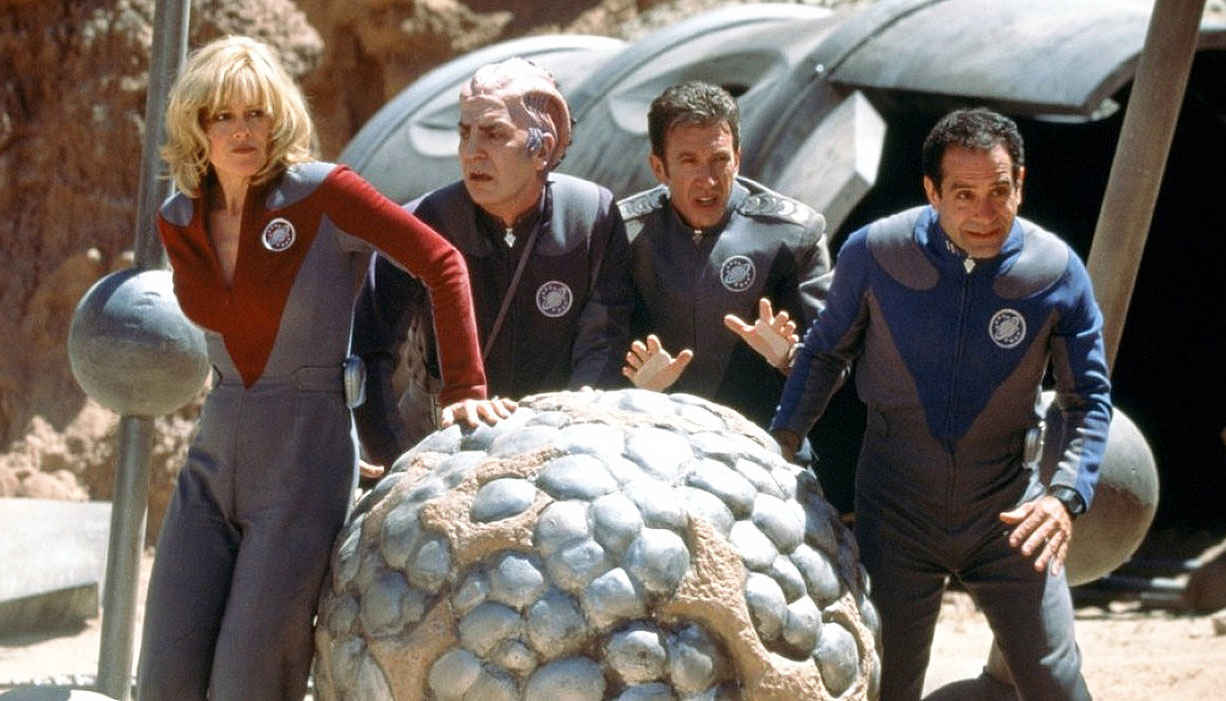 You don’t have to be a Trekkie to enjoy Galaxy Quest, a sparkling blend of sci-fi and comedy that affectionately spoofs every Star Trek cliché known to man, Romulan, or Klingon. Fans of Alien will also enjoy watching Sigourney Weaver let her (blonde!) hair down as an actress who – along with the cast of her cancelled Trek-style TV show – is whisked off to space to fight some genuine galactic bad guys.

Life hasn’t been the same for the stars of Galaxy Quest since their show was pulled in 1982. Twenty-five years on, they’re scraping a living – just – by trading on past glories and making demeaning public appearances at geeky conventions.

Back in the years when Star Trek was still a cult phenomenon (instead of a mainstream cash cow for Paramount Pictures), fan fiction was about the only way Trekkies could experience the latest exploits of their favorite characters. One of the more inventive examples of such writing was called “Visit to a Weird Planet Revisited” (by Ruth Berman). The premise underlying this story is that a transporter malfunction causes three Star Trek characters (from an alternate universe) to switch places with the actors playing them. Consequently, William Shatner finds himself in command of a very real starship out in space that is under attack by the nefarious Klingons. This same central conceit forms the basis of the movie Galaxy Quest, except that the TV show in question is only Star Trek in spirit, not in fact.