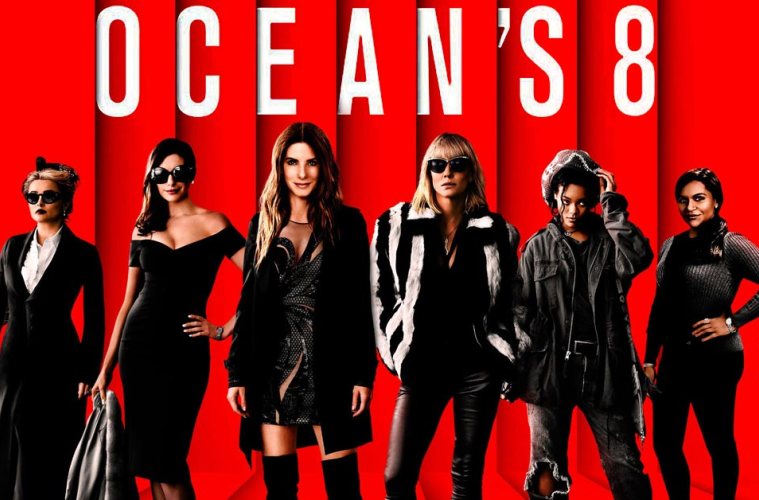 Thus does the master thief Debbie Ocean exhort her female partners in crime on the eve of their big jewelry heist in the director Gary Ross’s Ocean’s 8. It’s a cunning bit of narrative transposition. Because Debbie—played by Sandra Bullock—is of course really speaking to all the “girls” in the audience, whatever their ages might be. Because while few presumably dream of being actual criminals, who doesn’t dream of being effortlessly prepossessing, movie-star glamorous, and utterly in control? Not necessarily someone who would stage a daring robbery at the Met Gala; but someone who, if she so chose, could.

The film OCEAN’S 8, so far, has been all about defying expectations. After the pre- and post-release treatment of the “all-women” GHOSTBUSTERS, many understandably expected a similar public pillaring. After all, it bore the name of a male-dominated existing franchise but was set to star mostly women. Additionally, the OCEAN’S franchise had been well-regarded by critics and fans alike. However, beyond some mild grumbling, OCEAN’S 8 ended largely avoiding the same kind of digital hate.

It’s been eleven years since that trilogy-ending movie was released, bringing an end to the star-studded, money-making machine of the Ocean’s franchise, despite the quality declining with each subsequent release. Now, Pleasantville, Seabiscuit, and The Hunger Games director Gary Ross brings us the next installment but with a handy twist – the guys are gone and the girls are in. An all-star female ensemble cast leads the way in Ocean’s 8, though it’s still all about the heists.

The heist this time is led by pro thief Debbie Ocean (Bullock), the sister of Clooney’s Danny Ocean, as she assembles a crack squad to pull off one massively audacious heist during the New York Metropolitan Museum of Art’s Met Gala – steal the Toussant necklace from the sublime neck of actress Daphne Kluger (Hathaway), a Cartier necklace worth a mere $150 million dollars. Tough work, clearly. What Debbie will need is an old friend, a fence, a pickpocket, a hacker, a jewellery maker, and a disgraced fashion designer…