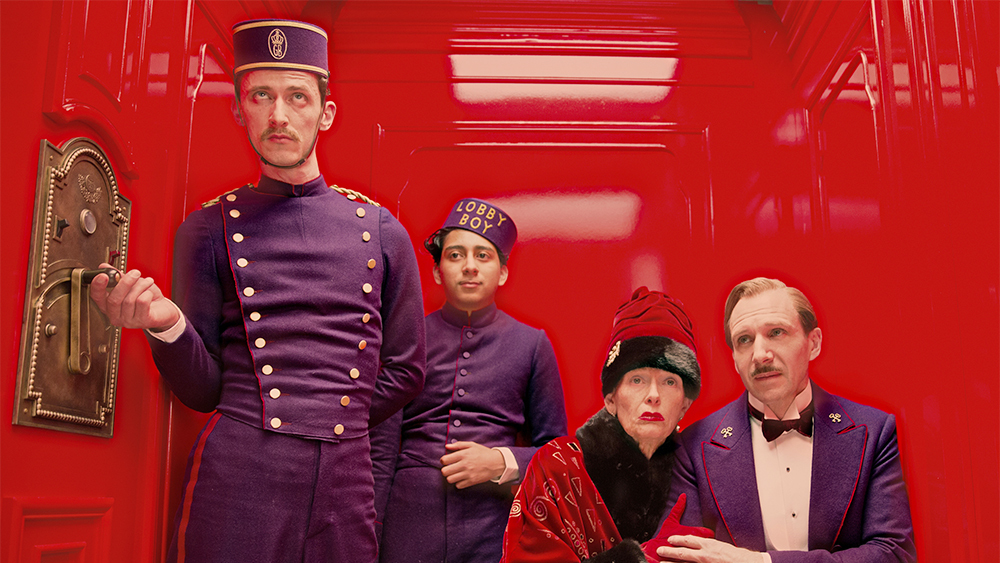 The adventures of Gustave H, a legendary concierge at a famous hotel from the fictional Republic of Zubrowka between the first and second World Wars, and Zero Moustafa, the lobby boy who becomes his most trusted friend.

In the far reaches of Eastern Europe in the former Republic of Zubrowka, there once was the Grand Budapest hotel. A writer remembers a stay at the hotel during the off season many years ago and recalls the tales he heard of the hotel’s past from the elderly owner, Mr. Mustafa.

He tells the young writer about how he came to acquire the hotel and of the original concierge of the Grand Budapest, M. Gustave H. Mustafa was a lobby boy at the time and accompanies Gustave to the reading of a will after one of their regular guests dies. She leaves Gustave a valuable painting but when the woman’s son challenges the will, Gustave and Mustafa steal the painting setting off a series of events that will lead to Mustafa’s present circumstance.

Director Wes Anderson’s apologia pro style sua. Most of the action takes place in the pre-communist heyday of the titular (and pinkly ornate) Alpine retreat, and involves concierge extraordinaire Gustave (Ralph Fiennes) and his attempt to claim the priceless painting left to him by a grateful old guest/lover. The mannered, madcap proceedings are often delightful, occasionally silly, and here and there, gruesome and/or heartbreaking.

But the real star of the show is Anderson himself — the storyteller, relating events in his own ineffable fashion — a point he makes by nesting Gustave’s tale in layer after layer of narrative device. We open with a fangirl paying tribute to a dead author, then cut to author in his latter days, then to author in his younger days, picking up the story from an old man full of memories, then to the old man as a young witness. And over it all hovers Anderson, the Master Framer himself. 2014.

Love and death, romance and horror, comedy and tragedy duel to an elegant draw in Wes Anderson’s rich torte of a movie — perhaps the most seductively European film ever made by a kid from Houston. The Anderson world has always been enclosed, an exquisite miniature simulacrum of the real or movie world. His camera style, showing figures in an unmoving frame, and reaction shots at a regimental 90- or 180-degree angle, mimics the viewing of museum installations by a fascinated robot. In rooms or exteriors of impossibly precise ornamental detail, the sense of the writer-director’s control is complete.

It begins in the fictional Republic of Zubrowka, with a girl placing a flower on the grave of a famous author. Then we see the writer, played by Tom Wilkinson, about to tell his story. Which he does, remembering a time when he stayed at the Grand Budapest Hotel.

Now the writer is played by Jude Law, who sits down in the fading hotel with Mr. Moustava (F. Murray Abraham), its owner, who remembers a time when the place was, indeed, grand.

That grand setting is where most of the film takes place. The young Zero Moustava (played by Tony Revolori) arrives at the hotel and finds a job as a lobby boy, working for M. Gustave (Ralph Fiennes). Gustave is flamboyant, attentive, detail-oriented in the extreme.