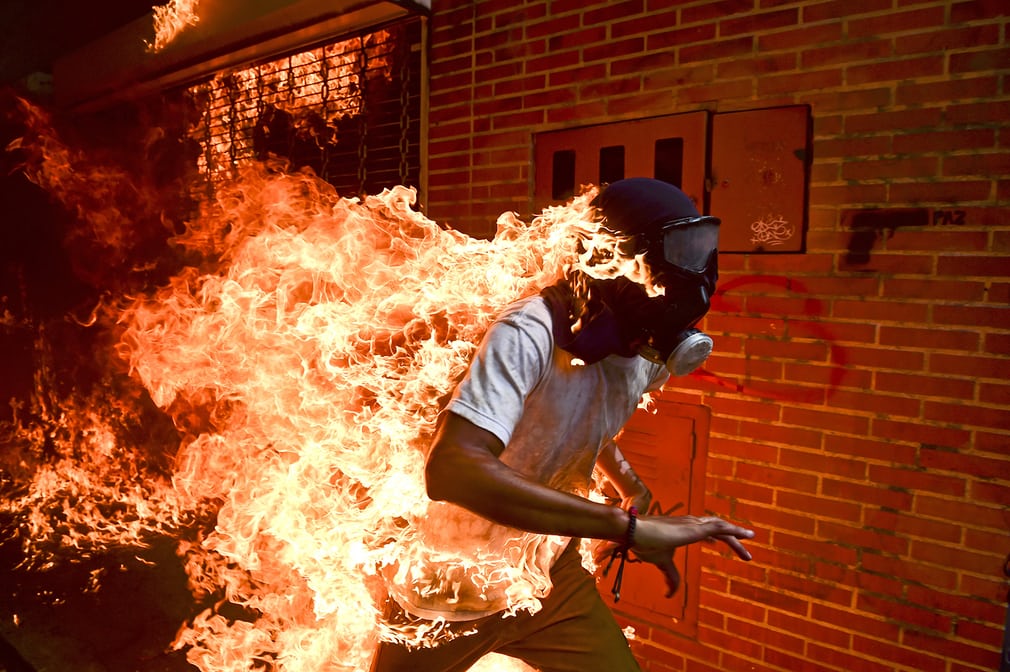 Highlights from this year’s competition include Ronaldo Schemidt’s image of a man on fire, which took the top prize

1. In this image released by World Press Photo which won the World Press Photo of the Year and the first prize Spot News singles category, titled “Venezuela Crisis” by Ronaldo Schemidt for Agence France-Presse, catching fire amid violent clashes with riot police during a protest against President Nicolas Maduro, in Caracas in Venezuela.

2. Winning image of World Press Photo 2018 for General News Singles taken by Richard Tsong-Taatarii shows John Thompson being embraced after speaking out at a memorial rally for his close friend Philando Castile, two days after police officer Jeronimo Yanez was acquitted of all charges in the shooting of Castile, in St Anthony Village, Minnesota, US, in June last year. (Reuters) 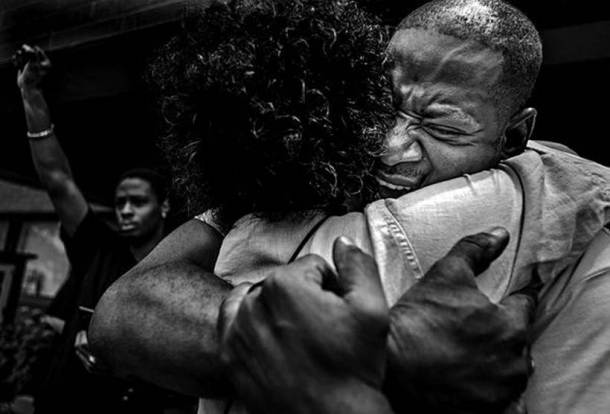 You May Also Like The 22 Best Digital Cameras For Sports, Wildlife, And Action Photography

3. Third-placed image of World Press Photo 2018 contest for General News Singles taken by Md Masfiqur Akhtar Sohan shows a group of Rohingya at the Leda makeshift settlement, who watch as houses burn just across the border in Myanmar, in Cox’s Bazar, in Bangladesh last year. (Reuters) 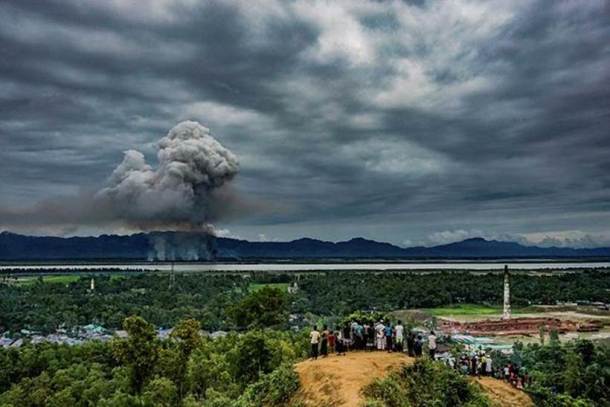 4. Second-placed series of images of World Press Photo 2018 contest for General News Stories taken by Kevin Frayer shows Rohingya refugees carrying their belongings after fleeing Myanmar, as they walk on the Bangladesh side of the Naf River. (Reuters) 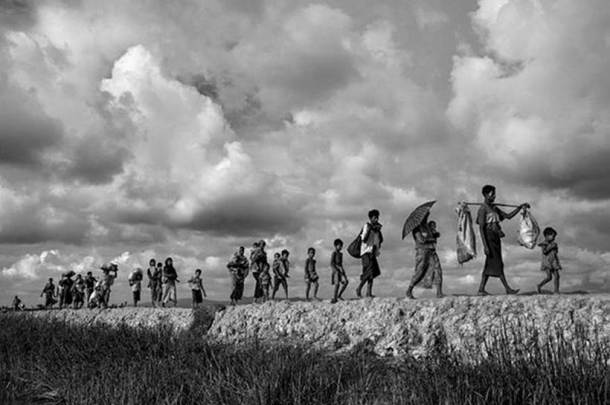 5. This image released by World Press Photo, titled “Waiting For Freedom” by Neil Aldridge, which was awarded the first prize in the category Environment singles, shows a young southern white rhinoceros, drugged and blindfolded, about to be released into the wild in Okavango Delta, Botswana, after its relocation from South Africa for protection from poachers. (AP) 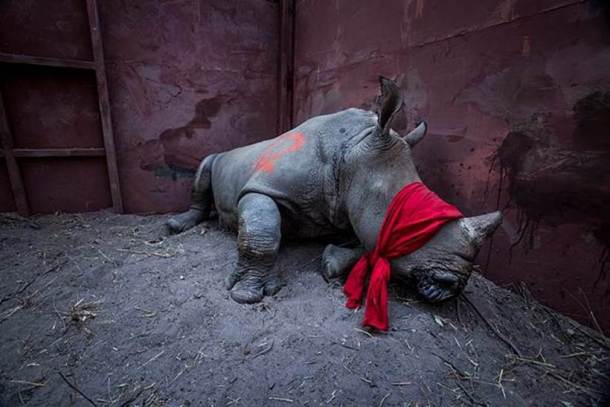 6. This image, titled “Boko Haram Strapped Suicide Bombs to Them. Somehow These Teenage Girls Survived” by Adam Ferguson for The New York Times, which was awarded first prize in the People stories category, shows Falmata, aged 15, as part of portraits of girls kidnapped by Boko Haram militants in September last year, taken in Maiduguri in Nigeria. The girls were strapped with explosives, and ordered to blow themselves up in crowded areas, but managed to escape and find help instead of detonating the bombs. (AP) 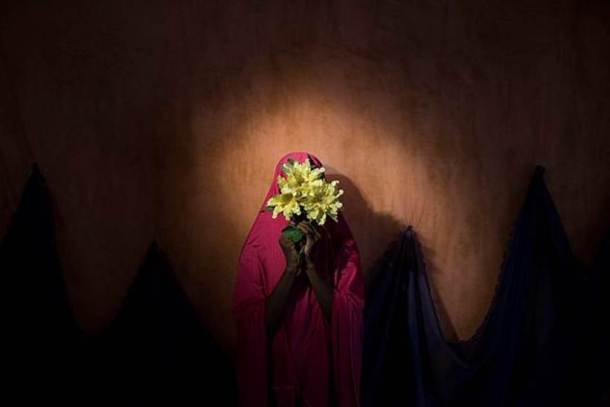 7. This image titled “Lagos Waterfronts under Threat” by Jesco Denzel for Laif, which was awarded the first prize Contemporary Issues, singles, shows a boat with tourists from Lagos Marina being steered through the canals of the Makoko community, an ancient fishing village that has grown into an enormous informal settlement, on the shores of Lagos Lagoon, Lagos in Nigeria. (AP) 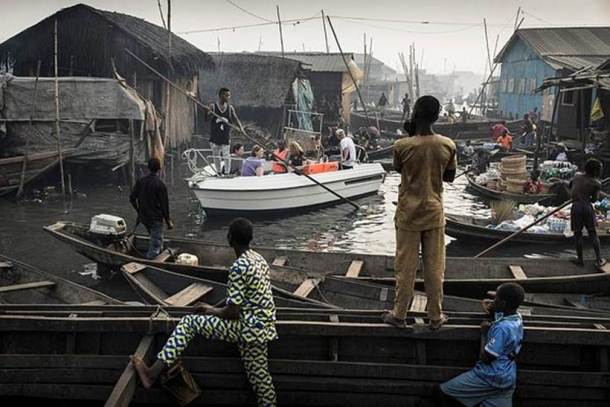 8.This image, titled “Banned Beauty”, by Heba Khamis, which was awarded the first prize in the category Contemporary Issues stories, shows Kamini Tontines (12), from Bafang, western Cameroon, hiding her breasts after her mother has ironed them. Breast ironing is a traditional practice in Cameroon that involves massaging or pressing the breasts of pubescent girls in order to suppress or reverse breast development. The practice is carried out in the belief that it will delay maturity and help prevent rapes or sexual advances. яндекс (AP) 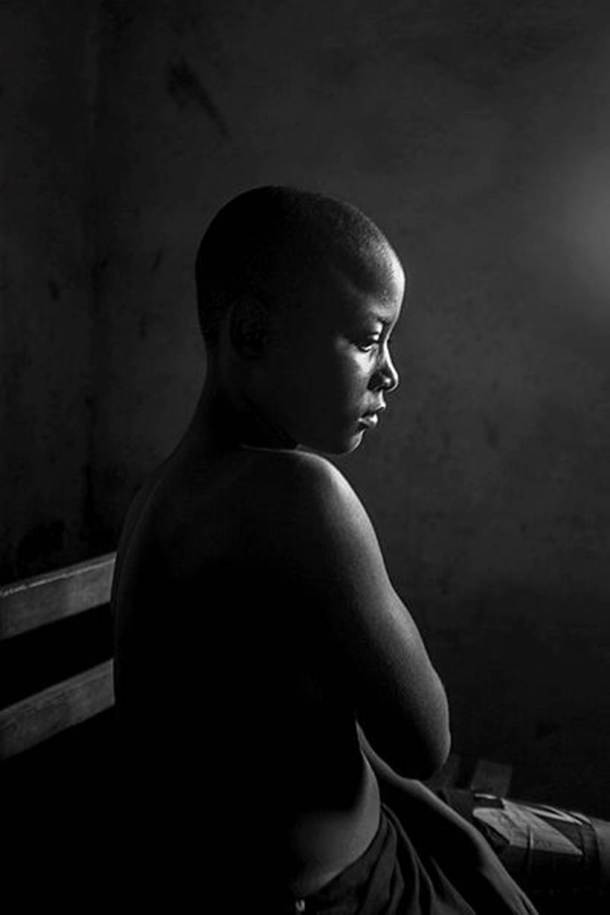 You May Also Like 18 Most Embarrassing Celebrity Moments Of All Time. Especially Number 3

9. In this image titled “Ich Bin Waldviertel”, by Carla Kogelman, which was awarded the first prize in the category Long Term Projects shows Hannah with Pipsi, a bird found in a nearby field. Although the girls cared for Pipsi tenderly, he died that summer and was given a lovely funeral in Merkenbrechts, Austria. (AP) 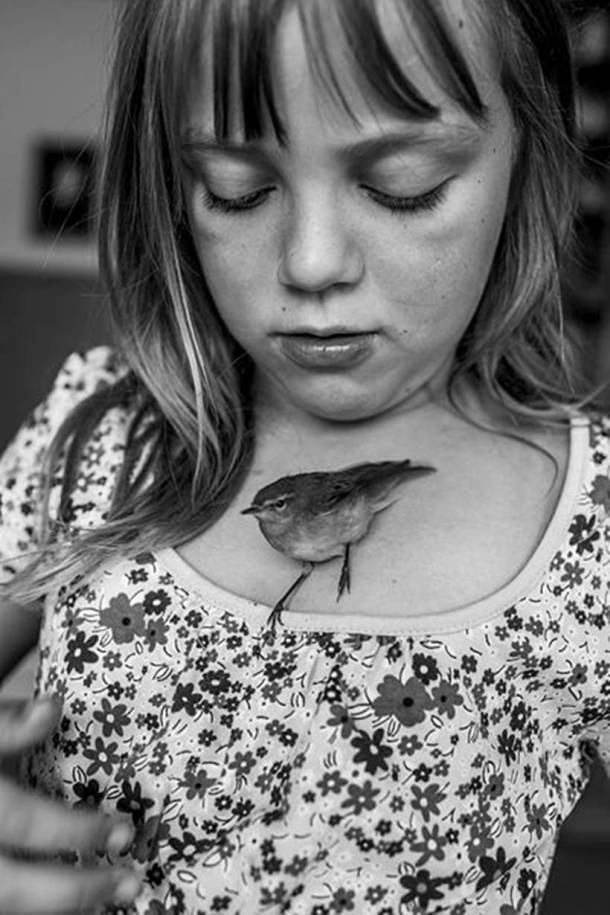 10. This image titled “Warriors Who Once Feared Elephants Now Protect Them” by Ami Vitale for National Geographic, which was awarded the first prize in the Nature stories category shows a rescued baby elephant being tended at the Reteti Elephant Sanctuary, in northern Kenya. (AP) 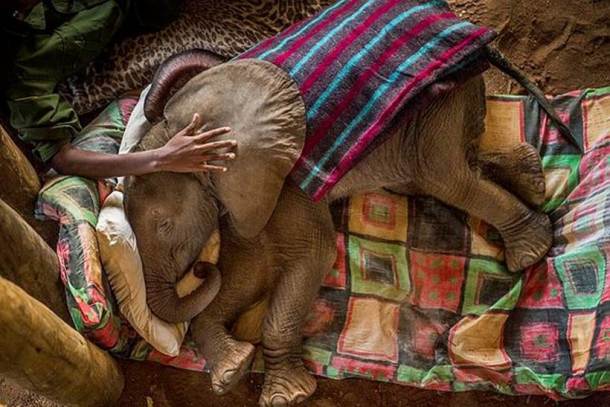 11. Aisha, 14, pictured in Maiduguri, Borno state, Nigeria. Aisha was kidnapped by Boko Haram and assigned a suicide bombing mission. After she was strapped with explosives, she managed to find help instead of blowing herself and others up 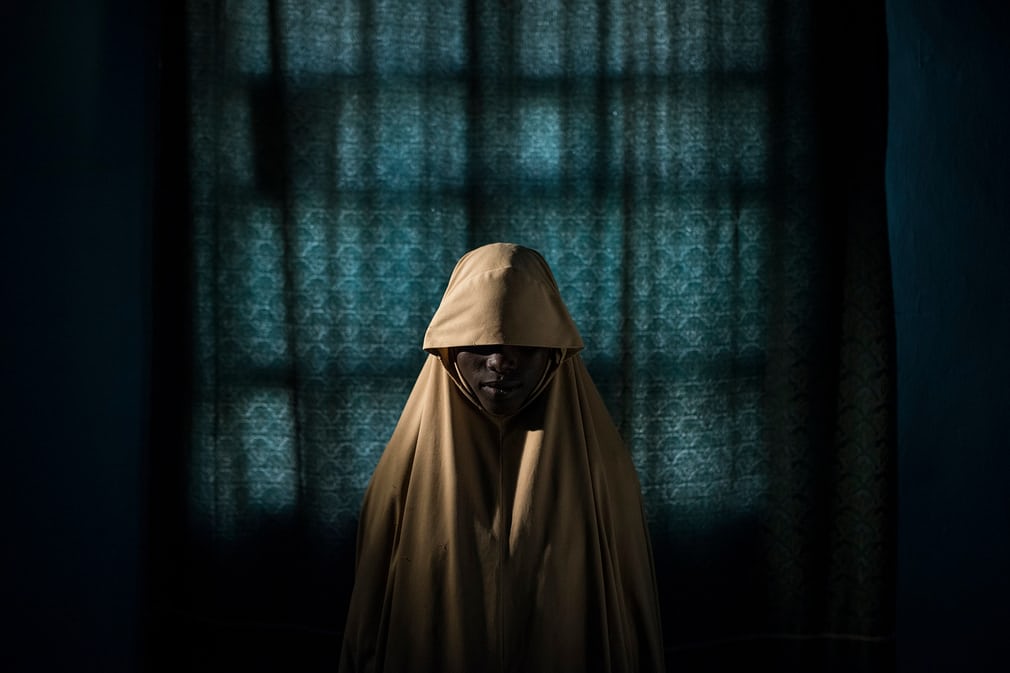 12. A man carries a huge bag of bottles collected for recycling at the Olusosun landfill site in Lagos, Nigeria 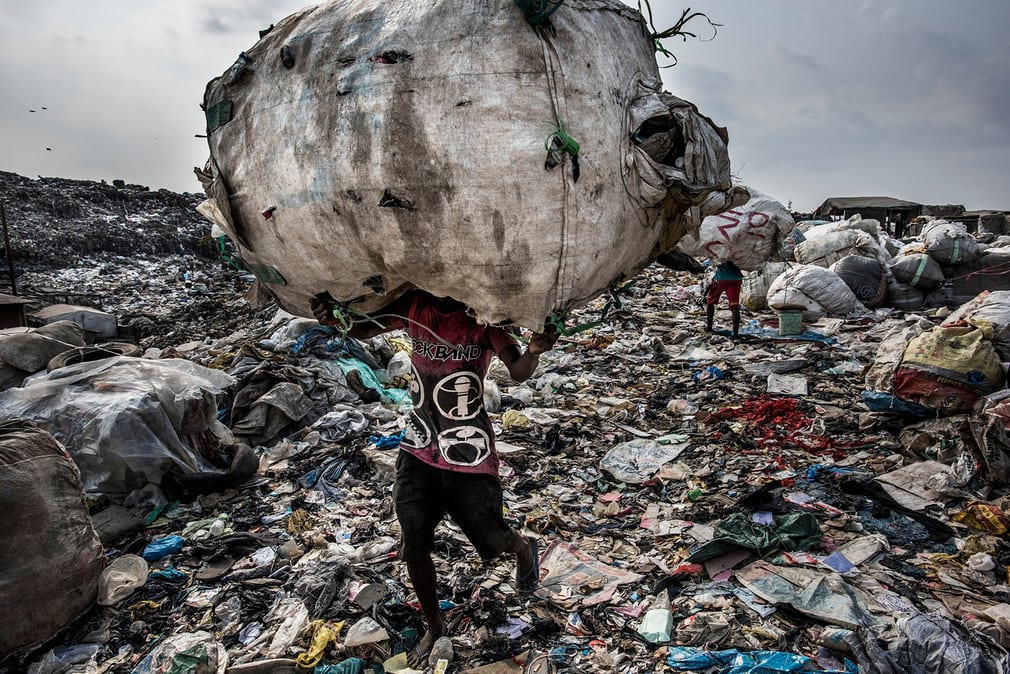 13. Rockhopper penguins live up to their name as they navigate the coastline of Marion Island, a South African sub-Antarctic territory in the Indian Ocean 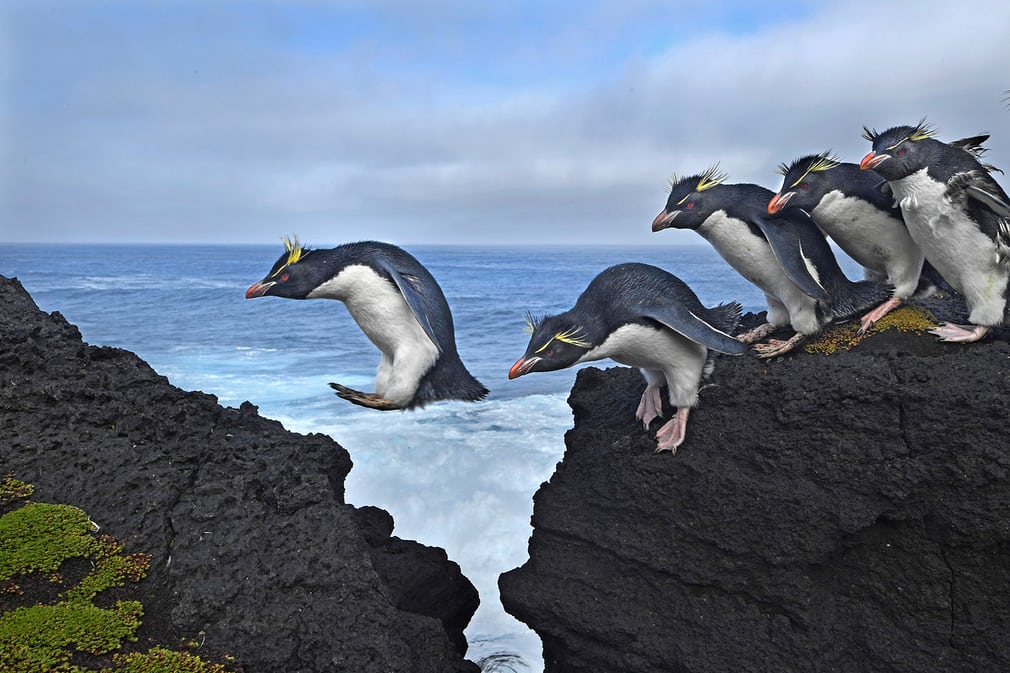 14. Veronica, 28, massages the breasts of her daughter in Cameroon. Breast ironing is a traditional practice that involves massaging or pressing the breasts of pubescent girls in order to suppress or reverse development. It is carried out in the belief that it will delay maturity and help prevent rapes or sexual advances 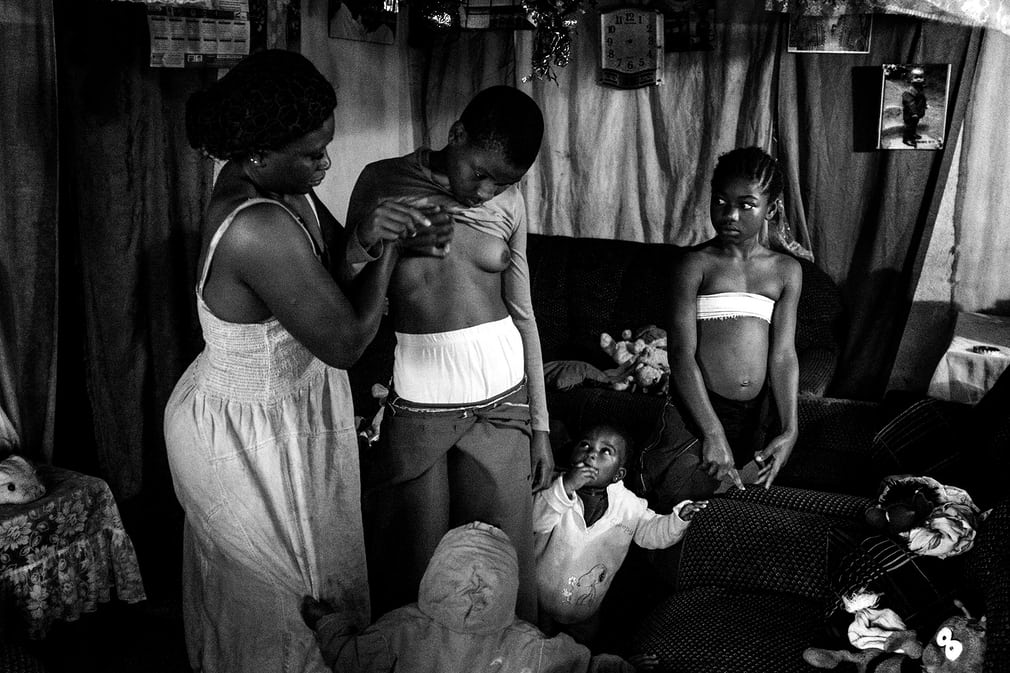 15. Competitors from the Up’ards and Down’ards teams reach for the ball during the annual Royal Shrovetide football match in Ashbourne, Derbyshire, England 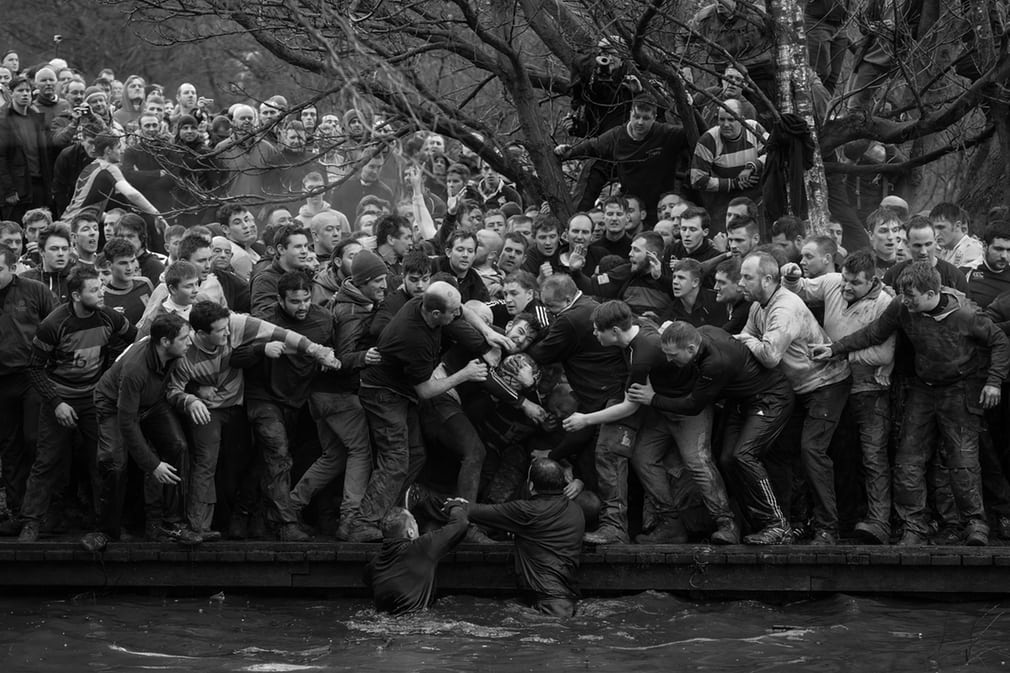 16. A bald eagle scavenges for scraps of meat in the garbage bins of a supermarket in Dutch Harbor, Alaska, US 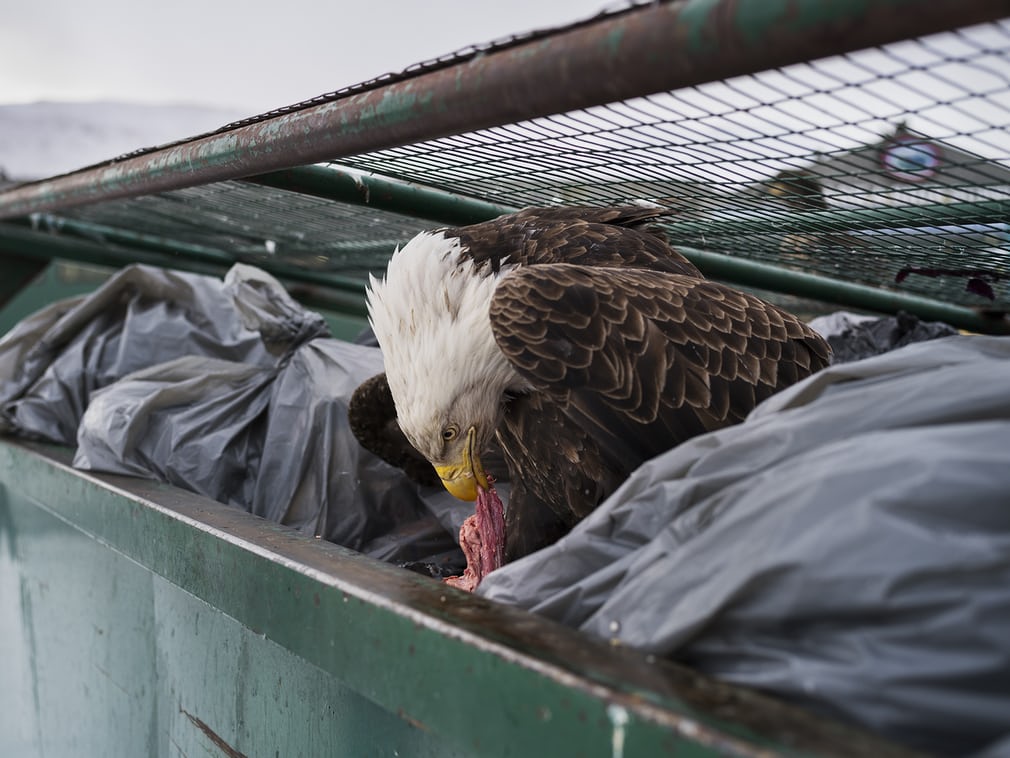 17. Nadhira Aziz watches as Iraqi civil defence workers recover the bodies of her sister and niece from her house in the city of Mosul, where they were killed by an airstrike in June. By the end of the battle for Mosul, more than 9,000 civilians were reported to have been killed 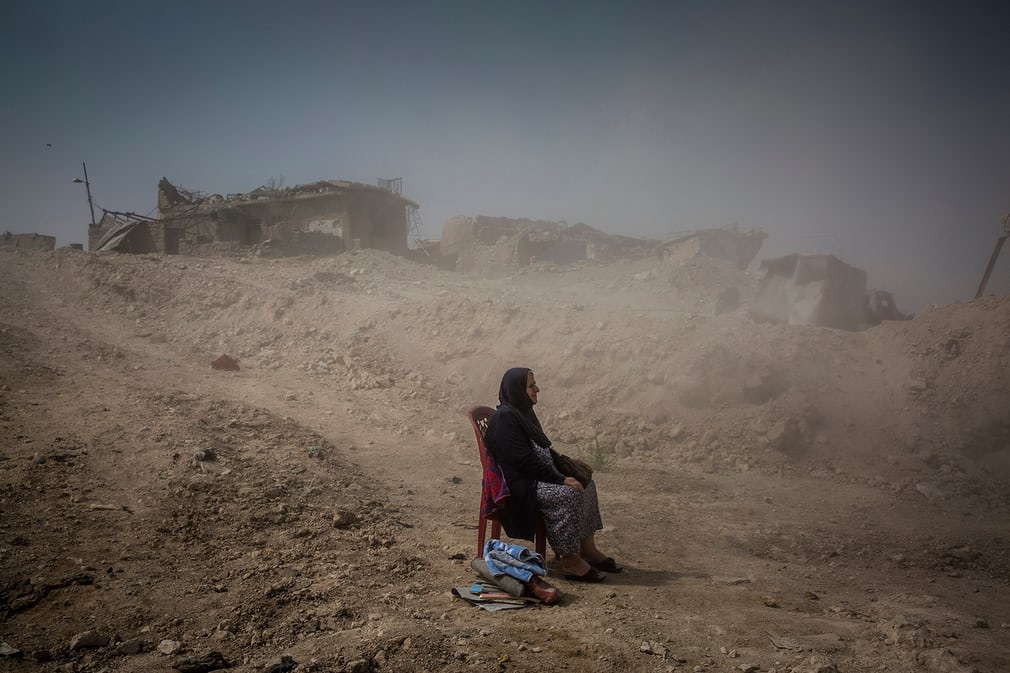 18. The bodies of Rohingya refugees are laid out after the boat in which they were attempting to flee Myanmar capsized off the coast of Bangladesh. Around 100 people were onboard; there were 17 survivors 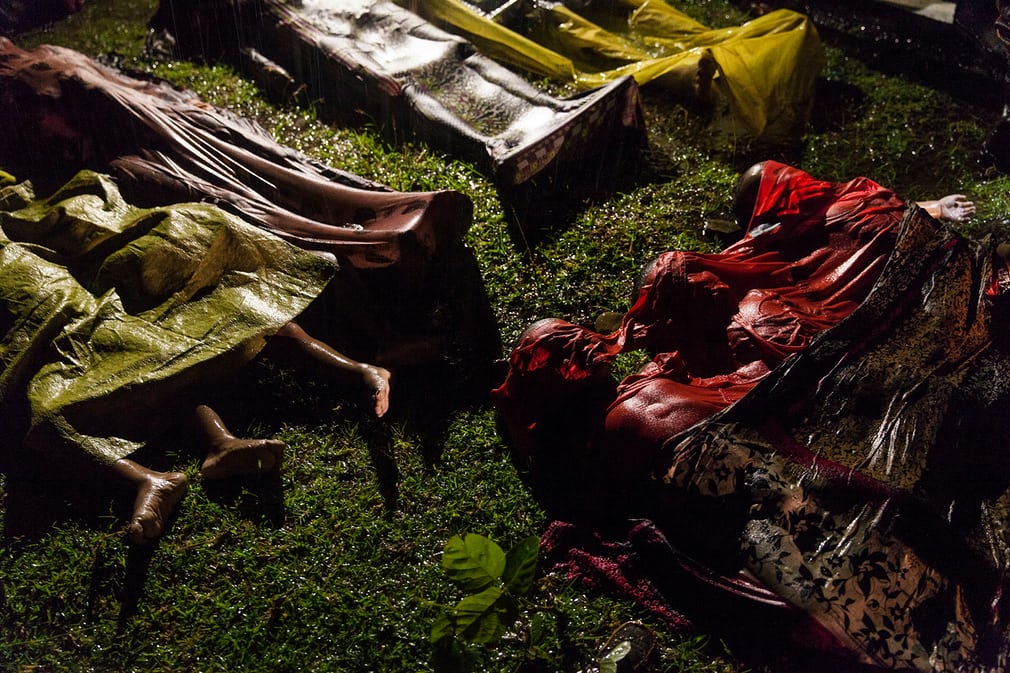 19. Djeneta, right, has been bedridden and unresponsive for two and a half years, and her sister Ibadeta for more than six months, in Horndal, Sweden. The sisters are Roma refugees from Kosovo who have resignation syndrome, which renders patients immobile, mute and unable to respond to physical stimulus 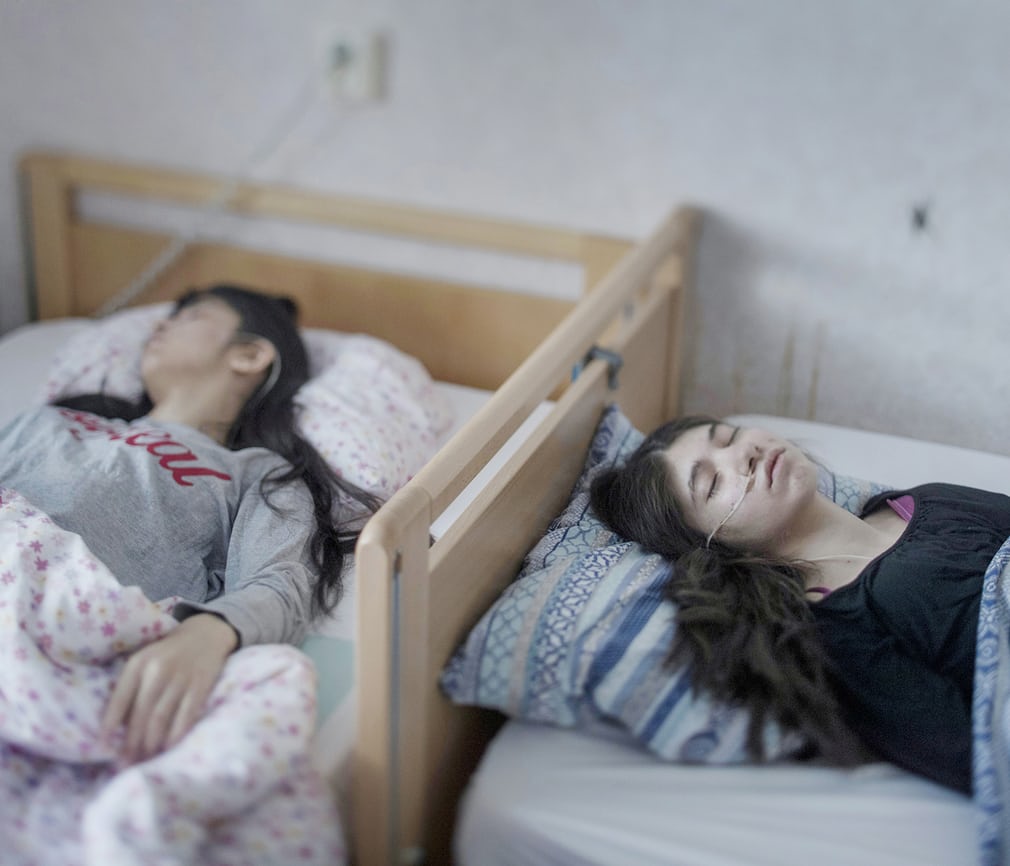 20. A flying fish swims below the surface of the North Atlantic Ocean, in the Gulf Stream, late at night off the coast of Palm Beach, Florida, US 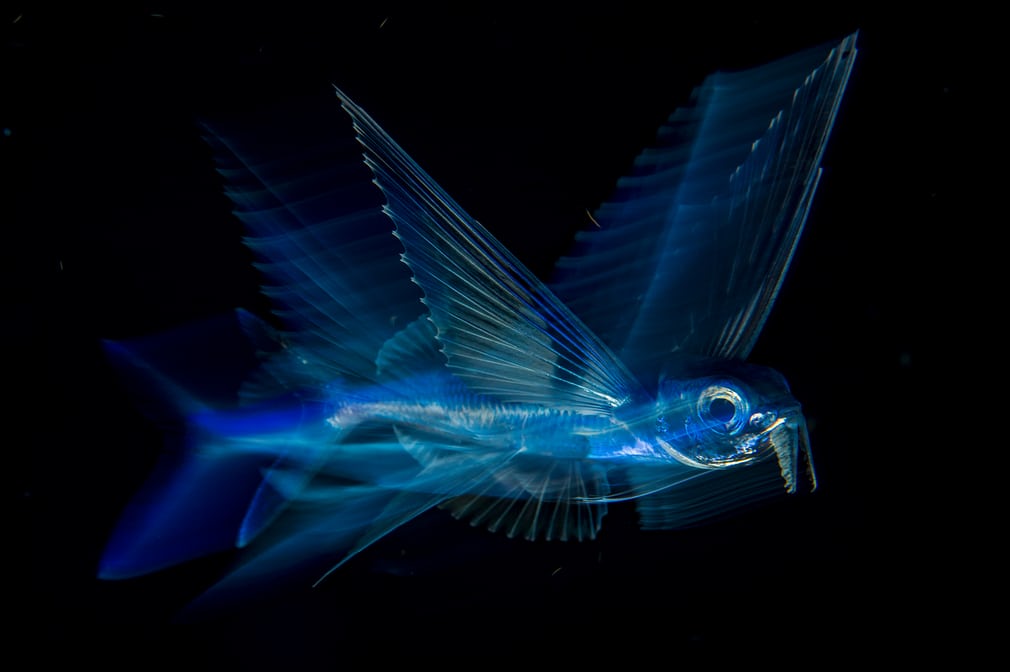