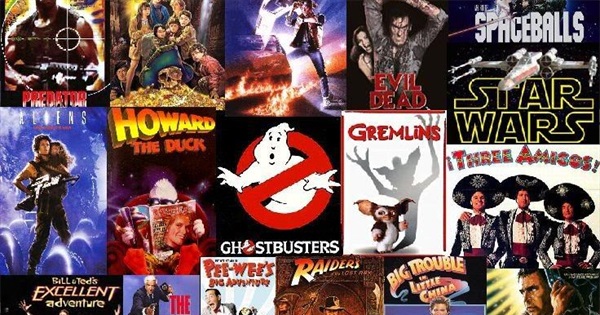 Rotten Tomatoes 140 essential ’80’s movies includes the truly timeless material (Raiders of the Lost Ark, Raging Bull). The list focuses on works that represented the cinematic trends and social themes of the era.

Marty McFly, a typical American teenager of the Eighties, is accidentally sent back to 1955 in a plutonium-powered DeLorean “time machine” invented by a slightly mad scientist.

During his often hysterical, always amazing trip back in time, Marty must make certain his teenage parents-to-be meet and fall in love – so he can get back to the future.

After a gentle alien becomes stranded on Earth, the being is discovered and befriended by a young boy named Elliott. Bringing the extraterrestrial into his suburban California house, Elliott introduces E.T., as the alien is dubbed, to his brother and his little sister, Gertie, and the children decide to keep its existence a secret. Soon, however, E.T. falls ill, resulting in government intervention and a dire situation for both Elliott and the alien.

Peter Venkman, Ray Stantz and Egon Spengler work at Columbia University. where they delve into the paranormal and fiddle with many unethical experiments on their students.

As they are kicked out of the University, they really understand the paranormal and go into business for themselves. Under the new snazzy business name of ‘Ghostbusters’, and living in the old firehouse building they work out of, they are called to rid New York City of paranormal phenomenon at everyone’s whim. – for a price.

Luke Skywalker, Han Solo, Princess Leia and Chewbacca face attack by the Imperial forces and its AT-AT walkers on the ice planet Hoth.

While Han and Leia escape in the Millennium Falcon, Luke travels to Dagobah in search of Yoda. Only with the Jedi Master’s help will Luke survive when the Dark Side of the Force beckons him into the ultimate duel with Darth Vader.

Her sister’s getting married, and with all the excitement the rest of her family forgets her birthday! Add all this to a pair of horrendously embarrassing grandparents, a foreign exchange student named Long Duk Dong, and we have the makings of a hilarious journey into young womanhood.

Haunted by a persistent writer’s block, the aspiring author and recovering alcoholic, Jack Torrance, drags his wife, Wendy, and his gifted son, Danny, up snow-capped Colorado’s secluded Overlook Hotel after taking up a job as an off-season caretaker.

As the cavernous hotel shuts down for the season, the manager gives Jack a grand tour, and the facility’s chef, the ageing Mr Hallorann, has a fascinating chat with Danny about a rare psychic gift called “The Shining”, making sure to warn him about the hotel’s abandoned rooms, and, in particular, the off-limits Room 237.

When Jake LaMotta steps into a boxing ring and obliterates his opponent, he’s a prizefighter. But when he treats his family and friends the same way, he’s a ticking time bomb, ready to go off at any moment.

Though LaMotta wants his family’s love, something always seems to come between them. Perhaps it’s his violent bouts of paranoia and jealousy.

The year is 1936. An archeology professor named Indiana Jones is venturing in the jungles of South America searching for a golden statue. Unfortunately, he sets off a deadly trap but miraculously escapes.

Then, Jones hears from a museum curator named Marcus Brody about a biblical artifact called The Ark of the Covenant, which can hold the key to humanly existence. Jones has to venture to vast places such as Nepal and Egypt to find this artifact.

This film looks at life in the Bedford-Stuyvesant district of Brooklyn on a hot summer Sunday. As he does everyday, Sal Fragione opens the pizza parlor he’s owned for 25 years.

The neighborhood has changed considerably in the time he’s been there and is now composed primarily of African-Americans and Hispanics. His son Pino hates it there and would like nothing better than to relocate the eatery to their own neighborhood.

An elderly man reads the book “The Princess Bride” to his sick and thus currently bedridden adolescent grandson, the reading of the book which has been passed down within the family for generations.

The grandson is sure he won’t like the story, with a romance at its core, he preferring something with lots of action and “no kissing”. But the grandson is powerless to stop his grandfather, whose feelings he doesn’t want to hurt.

A US research station, Antarctica, early-winter 1982. The base is suddenly buzzed by a helicopter from the nearby Norwegian research station. They are trying to kill a dog that has escaped from their base.

After the destruction of the Norwegian chopper the members of the US team fly to the Norwegian base, only to discover them all dead or missing.

They do find the remains of a strange creature the Norwegians burned. The Americans take it to their base and deduce that it is an alien life form.

NYPD cop John McClane goes on a Christmas vacation to visit his wife Holly in Los Angeles where she works for the Nakatomi Corporation.

While they are at the Nakatomi headquarters for a Christmas party, a group of robbers led by Hans Gruber take control of the building and hold everyone hostage, with the exception of John, while they plan to perform a lucrative heist. Unable to escape and with no immediate police response, John is forced to take matters into his own hands.

Sent back from a dystopian 2029–where the cold machines have conquered the entire world–to 1984 Los Angeles, the indestructible cyborg-assassin known as the “Terminator” commences his deadly mission to kill humankind’s most important woman: the unsuspecting, Sarah Connor.

However, from the same war-torn post-apocalyptic future comes a battle-scarred defender–Kyle Reese, a brave soldier of the human Resistance Army–bent on stopping the cybernetic killer from eliminating the world’s last hope.

In the early twenty-first century, the Tyrell Corporation, during what was called the Nexus phase, developed robots, called “replicants”, that were supposed to aid society, the replicants which looked and acted like humans.

When the superhuman generation Nexus 6 replicants, used for dangerous off-Earth endeavors, began a mutiny on an off-Earth colony, replicants became illegal on Earth.

Police units, called “blade runners”, have the job of destroying – or in their parlance “retiring” – any replicant that makes its way back to or created on Earth, with anyone convicted of aiding or assisting a replicant being sentenced to death.

Recidivist hold-up man H.I. McDonnough and police woman Edwina marry, only to discover they are unable to conceive a child.

Desperate for a baby, the pair decide to kidnap one of the quintuplets of furniture tycoon Nathan Arizona. The McDonnoughs try to keep their crime secret, while friends, co-workers and a feral bounty hunter look to use Nathan Jr.

Ashley Williams travels to a secluded cabin in the woods with his girlfriend Linda where they find a tape recording of a professor and a book of evil.

This unleashes a bunch of evil spirits that constantly terrorize Ash. Meanwhile a journalist comes to the area to study the book of evil. Ash and her end up having to survive this swarm of evil until morning comes.

Drowning his sorrows after that botched mission during WWII, the traumatised former fighter pilot with a fear of flying, Ted Striker, still hasn’t got over his old flame and flight attendant, Elaine Dickinson.

Determined to win her back, Ted boards a domestic flight from Los Angeles to Chicago, only to come face-to-face with a severe case of in-flight food poisoning that is threatening everyone’s lives.

A team of special force ops, led by a tough but fair soldier, Major “Dutch” Schaefer, are ordered to assist CIA man, Colonel Al Dillon, on a rescue mission for potential survivors of a Helicopter downed over remote South American jungle.

Not long after they land, Dutch and his team discover that they have been sent in under false pretenses. This deception turns out to be the least of their worries though, when they find themselves being methodically hunted by something not of this world.

It’s the summer of 1959 in Castlerock, Maine and four 12 year-old boys – Gordie, Chris, Teddy and Vern – are fast friends.

After learning of the general location of the body of a local boy who has been missing for several days, they set off into woods to see it. Along the way, they learn about themselves, the meaning of friendship and the need to stand up for what is right.

High school senior Lloyd Dobler wants nothing more than to go out with beautiful and intelligent Diane Court.

Lloyd attempts to win her heart over the objections of her over-protective father before Diane leaves for a scholarship in England.

Mikey and his friends have always wanted to go on an adventure. One night they are all in Mikey’s attic and Mikey stumbles across an old map.

Mikey has always wanted to know if One-eyed Willy ever was a real person and now he might. They set off and later realize that they have to go through the evil Mama Fratelli’s restaurant to get to a secret passage to the caves. As they try to get into the caves Mama Fratelli catches Chuck and he is left behind.

All that Neal Page wants to do is to get home for Thanksgiving. His flight has been cancelled due to bad weather, so he decides on other means of transport.

As well as bad luck, Neal is blessed with the presence of Del Griffith, shower curtain ring salesman and all-around blabbermouth who is never short of advice, conversation, bad jokes, or company.

David Byrne walks onto the stage and does a solo “Psycho Killer.” Jerry Harrison, Tina Weymouth and Chris Frantz join him for two more songs.

The crew is busy, still setting up. Then, three more musicians and two back-up singers join the band. Everybody sings, plays, harmonizes, dances, and runs.

They change instruments and clothes. Bryne appears in the Big Suit. The backdrop is often black, but sometimes it displays words, images, or children’s drawings.

The band cooks for 18 songs, the lyrics are clear, the house rocks. In this concert film, the Talking Heads hardly talk, don’t stop, and always make sense.

Bastian is a young boy who lives a dreary life being tormented by school bullies. On one such occasion he escapes into a book shop where the old proprieter reveals an ancient story-book to him, which he is warned can be dangerous.

Shortly after, he “borrows” the book and begins to read it in the school attic where he is drawn into the mythical land of Fantasia, which desperately needs a hero to save it from destruction.

31 years after being destroyed during World War 3, Tokyo (now ‘Neo-Tokyo’) has been rebuilt and is a thriving metropolis.

Shotaro Kaneda is the leader of a biker gang. His friend Tetsuo is injured in an accident and taken to a top-secret government facility. He develops telekinetic powers but decides to use them for evil rather than good.