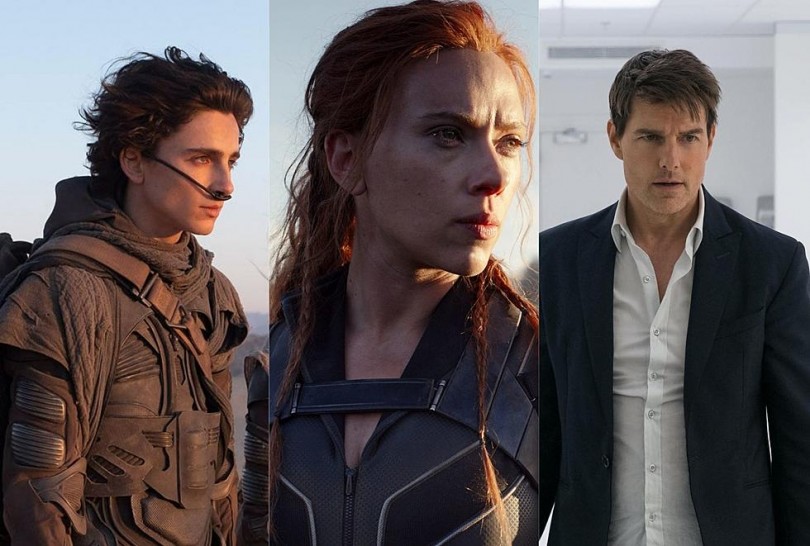 Some of the biggest movies could not be released in 2020 due to Covid 19. It seems like 2021 will tell a different story than 2020. We have selected 40 movies which should be in your must-see list the next 12 months.

A heavy-metal drummer’s life is thrown into freefall when he begins to lose his hearing.

A look at the formative years of New Jersey gangster, Tony Soprano.

Following the economic collapse of a company town in rural Nevada, Fern (Frances McDormand) packs her van and sets off on the road exploring a life outside of conventional society as a modern-day nomad.

An intimate look at the singer-songwriter’s journey, navigating life on the road, on stage, and at home, while creating her debut album.

Feature film adaptation of the musical about a teenager from Sheffield, England who wants to be a drag queen.

A young woman, traumatized by a tragic event in her past, seeks out vengeance against those who cross her path.

When Washington Post journalist Jamal Khashoggi disappears in Istanbul, his fiancée and dissidents around the world piece together the clues to a murder and expose a global cover up

After swapping bodies with a deranged serial killer, a young girl in high school discovers she has less than 24 hours before the change becomes permanent.

Five years after the end of the Civil War, Captain Jefferson Kyle Kidd (Tom Hanks), a veteran of three wars, now moves from town to town as a non-fiction storyteller, sharing the news of presidents and queens, glorious feuds, devastating catastrophes, and gripping adventures from the far reaches of the globe

11. The United States Vs Billie Holiday

Follows Holiday during her career as she is targeted by the Federal Department of Narcotics with an undercover sting operation led by black Federal Agent Jimmy Fletcher, with whom she had a tumultuous affair

Bond has left active service and is enjoying a tranquil life in Jamaica. His peace is short-lived when his old friend Felix Leiter from the CIA turns up asking for help.

An investigative thriller with elements of romance, the film narrates the story of two couples: a Kochi-based scrap artist named Luca and his girlfriend Niharika; and a police officer named Akbar and his wife Fathima.

In the Heights centers on a variety of characters living in the neighborhood of Washington Heights, on the northern tip of Manhattan

After more than thirty years of service as one of the Navy’s top aviators, Pete Mitchell is where he belongs, pushing the envelope as a courageous test pilot and dodging the advancement in rank that would ground him.

A young girl, passionate about fashion design, is mysteriously able to enter the 1960s where she encounters her idol, a dazzling wannabe singer. But 1960s London is not what it seems, and time seems to fall apart with shady consequences.

At birth the Black Widow “aka Natasha Romanova” is given to the KGB, which grooms her to become its ultimate operative. When the U.S.S.R. breaks up, the government tries to kill her as the action moves to present-day New York, where she is a freelance operative.

Following the events at home, the Abbott family now face the terrors of the outside world. Forced to venture into the unknown, they realize the creatures that hunt by sound are not the only threats lurking beyond the sand path.

Sam and Tusker partners of 20 years, who are traveling across England in their old RV visiting friends, family and places from their past.

21. Raya and the Last Dragon

In a realm known as Lumandra, a re-imagined Earth inhabited by an ancient civilization, a warrior named Raya is determined to find the last dragon.

King Charles VI declares that Knight Jean de Carrouges settle his dispute with his squire by challenging him to a duel.

A Korean family moves to Arkansas to start a farm in the 1980s.

A look at the life of the legendary rock and roll star, Elvis Presley.

A look at how tennis superstars Venus and Serena Williams became who they are after the coaching from their father Richard Williams.

Two youngsters from rival New York City gangs fall in love, but tensions between their respective friends build toward tragedy

27. Judas and the Black Messiah

The story of Fred Hampton, Chairman of the Illinois Black Panther Party, and his fateful betrayal by FBI informant William O’Neal.

Cypher enlists the help of Jakob, Dom’s younger brother to take revenge on Dom and his team.

29. The Woman in the Window

An agoraphobic woman living alone in New York begins spying on her new neighbors, only to witness a disturbing act of violence.

In 1961, Kempton Bunton, a 60 year old taxi driver, stole Goya’s portrait of the Duke of Wellington from the National Gallery in London. He sent ransom notes saying that he would return the painting on condition that the government invested more in care for the elderly.

A mythic and emotionally charged hero’s journey, “Dune” tells the story of Paul Atreides, a brilliant and gifted young man born into a great destiny beyond his understanding, must travel to the most dangerous planet in the universe to ensure the future of his family and his people.

Omar is a promising young musician. Separated from his Syrian family, he is stuck on a remote Scottish island awaiting the fate of his asylum request.

In present day, a decade after the last of the Cabrini towers were torn down, Anthony and his partner move into a loft in the now gentrified Cabrini. A chance encounter with an old-timer exposes Anthony to the true story behind Candyman.

Documentary about the music group The Beatles featuring in-studio footage that was shot in early 1969 for the 1970 feature film ‘Let It Be.

38. People Just Do Nothing: Big in Japan

Since the end of their pirate radio station, life has been quiet for the Kurupt FM boys, but everything is about to change. News reaches them that one of their songs has been used on a popular game show in Japan.

The further adventures of Harley Quinn, Rick Flag and their team of assembled supervillains.

40. The Many Saints of Newark

A look at the formative years of New Jersey gangster, Tony Soprano.