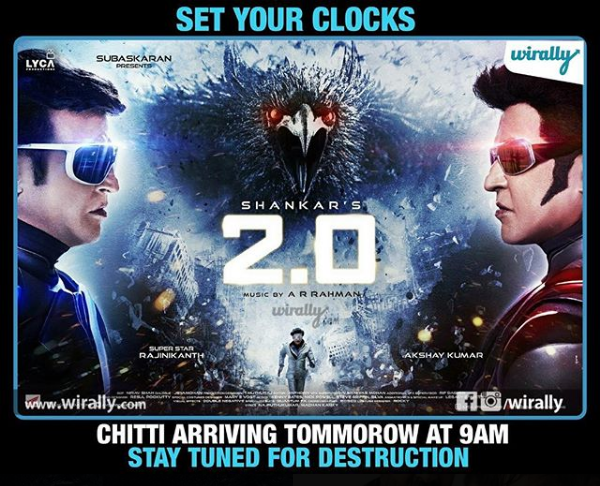 2.0 teaser will be out on September 13. The teaser of Rajinikanth, Akshay Kumar, and Amy Jackson’s film will be released in 3D and 2D formats.

Superstar Rajinikanth-starrer ‘2.0’ is easily the most awaited Indian film ever. The makers have teased fans with posters so far and now the audiences will get a glimpse of the visual extravaganza on September 13.

Ever since the commencement of ‘2.0’ in 2016, fans have been madly waiting for its release since it marks Akshay Kumar’s first association, Rajinikanth and Shankar. Interestingly, the film will see Rajinikanth locking the horns with Akshay Kumar, who is playing the role of Dr. Richard.

On the other hand, Rajinikanth will return to screen as Chitti, the Andro-Humanoid Robot. The actor will be sharing screen space with Rajinikanth for the first time. On the occasion of his birthday, the makers released a new poster of Akshay’s character of Dr. Richard aka Crow Man.

Sharing a note on Twitter, 2.0 producers Lyca Productions announced,  “To clear all doubts, the teaser will release simultaneously in 3D and 2D. We are planning to screen the teaser in 3D across India and abroad in select theaters. We will release the 3D theater list in India over the next few days. A lot of hard work and effort is going on to ensure you all watch the teaser in 3D as the magnum opus 2.0 is fully shot in the same format.”

Reports also suggest that Amy Jackson will also be seen as a Robot. In fact, pictures of Amy Jackson along with Rajinikanth went viral on the internet. Reports say that ‘2.0’ teaser will showcase some breathtaking scenes between Rajini and Akshay.