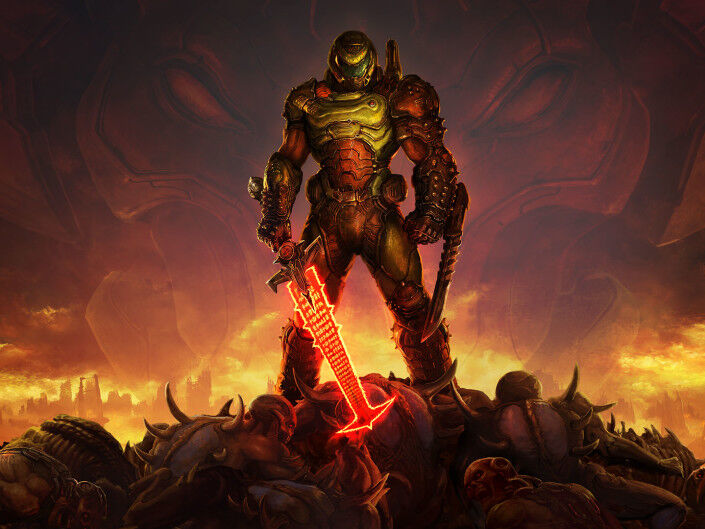 His fans call him Doomguy. This is the nickname he goes by in the game Doom Eternal. Doom Slayer is the protagonist of the Doom series and has many stories going with his character.

Some other games where you will find the Doom Slayer are Doom, Doom II: Hell on Earth, Final Doom, Doom 64, Doom (2016), Quake Champions, Quake III Arena, and Doom Eternal.

It was the Demons of hell who gave him the name “Doom Slayer.” Some other names bestowed on him are the Unchained Predator, the Beast, and the Hell Walker. The UAC also calls him as the DOOM Marine or The Slayer.

The Doom series is supposed to be one of the most successful and popular. It is the first game that comes to mind when we think of first-person shooters.

The game has many successful features, including an exciting story. They continue the story in the sequel to its blockbuster title in Doom Eternal.

Legend of the Doom Slayer

The legend of Doom Slayer is quite complicated. Doom Eternal changes the legend by adding details and explaining things that we did not know.

Codex entries and cutscenes in DOOM eternal bridge all the original series together and confirm that Doomguy is Doom Slayer. Though there are some more points that we are yet to understand, the overall story is as follows.

There is not much that you need to know about the plot of these games to understand how Doomguy became the Doom slayer. The Doomguy is a marine working as a security guard on Mars.

The Union aerospace corporation has a radioactive waste facility on Mars. It also simultaneously has portals for travel between Mars and its Moons, i.e., Phobos and Deimos.

One day Deimos disappears, and instead, we have demons coming out of the portals. The Doomguy then fights and makes his way through Phobos, goes to Deimos, which is now teleported to hell. Meanwhile, he kills the

Spiderdemon who initiated this attack. He is brought to Earth, where he sees a similar invasion is happening. The Demons have killed his pet rabbit Daisy.

In DOOM II, the Doomguy again fights forces of Hell on Earth and helps the survivors to leave in a Spaceship. He then goes to Hell, where he kills a demon called the icon of sin and comes back to Earth.

The game manual of DOOM 64 explains the toll all these fights have on Doom guy. Though the UAC facility on Mars is quarantined, reports show that Demons are back. Doomguy will have to go to Mars to remove this threat finally.

On the way, he goes to hell and defeats the Mother Demon. He vows he will never let Demons invade Earth again and will stay in Hell. This is where his story supposedly ends.

Argent D’Nur And the Night Sentinels

At this point, the story becomes intense. After fighting demons in hell, the Doomguy is sent to planet Argent D’Nur. The inhabitants of this planet are called Argenta and are space Vikings.

Now the forces of hell invade the planet Argent D’Nur, and the night sentinels are caught off guard as they are not prepared. They turn to their God Mother Kahn Maykr so she can help them.

Urdak And the Kahn Maykr

Kahn Maykr is the main antagonist of Doom Eternal, and there are many things we don’t know about her. Long ago, the Kahn Maykr came to know of a prophecy that suggested one-day Urdak and Maykr will be defeated.

Their opponent or the “Unholy One” would come from Argenta. So, Kahn Maykr creates the Divinity Machine so Argenta cannot reach them.

The Maykr had no idea of hell and its demons until they were invaded. Maykr then went to hell and made factories to get the Essence of power from hell and send it to Argenta.

The Doomguy is known to Argenta as the “Outlander” and is the only one who has the knowledge and expertise to fight the demons.

King of Argent d’Nur, King Novik, allows Doomguy to join the night sentinels and guide them in this fight against demons.

The Night Sentinels have fought the demons for years, continuing to travel back and forth through this portal to hell. In the end, the forces of Hell bring a massive Titan to attack Taras Nabad, a significant city of Argent d’Nur.

At this point, the Doomguy fights them even though the other Night Sentinels have given up. Then the Kahn Maykr’s aid Samur takes the marine to the Divinity Machine.

In the last scene. Samur tells Doomguy that this is a gift that will provide him the strength to move ahead in this journey.

When Doomguy enters the chamber, he gets strength and more abilities. Now Doomguy is the Doom Slayer. Before this scene ends, Samur tells the Doom Slayer, “And now, they will fear you.”