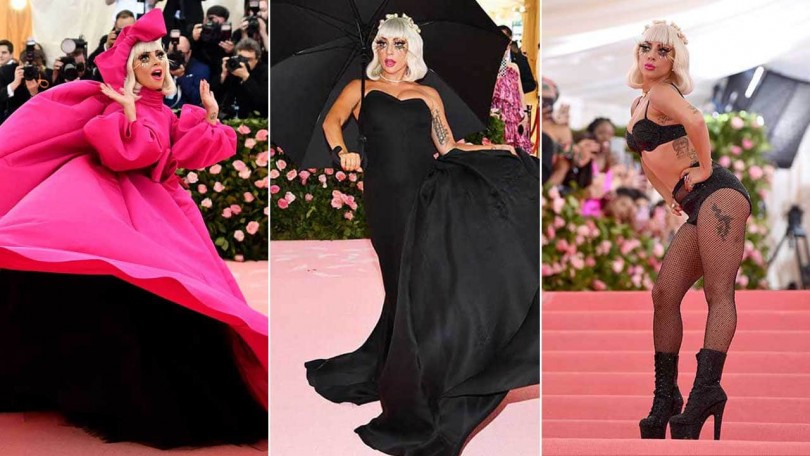 The Met Gala is to fashion what Grammy is to music. No matter how big a celebrity you are, you can’t afford to miss the annual costume party, held at the Metropolitan Museum of Art in New York. The show hosted the most stylish celebrities again, with most of them living up to the occasion as they look better than the last year.

This year’s gala theme, “Camp: Notes on Fashion,” was inspired by an essay, written by Susan Sontag in 1954 in which she describes the phenomenon as something that shan’t be talked about: “To talk about Camp is therefore to betray it.”

Have a look at the best and worst dressed celebrities.

Her waist was nearly invisible. Her husband Kanye West standing behind her in a black jacket and pants. But the biggest attraction was Mugler dress, which was not just body-hugging, but it was wet, wild and totally see-through.
Of course, her look was inspired by this vintage pic of Sophia Loren.

At 2019 event too, Kim was at the centre of attraction, with her figure-hugging Versace number.

Remember, it was the Met Gala event in 2017, where the couple was spotted in public together.

Have a look at Priyanka’s beige custom-made trench coat dress at Met Gala 2017.

Dressed in Zac Posen gown, she made waves at the show. Padukone’s gown was embellished with 400 3D-printed pieces. Her dress did not go unnoticed on social media. On Twitter, her fans compare her with a Barbie doll.

This is third consecutive year, Deepika attended the event. At the 2017 event, she was dressed in simple Tommy Hilfiger gown.

You May Also Like – 25 Hot Photos Of Deepika Padukone

Sophie Turner, the Game of Thrones star, arrived at the show with her husband Joe Jonas. Their appearance came just five days after their marriage. The couple was dressed in custom-made Louis Vuitton attires. Jonas’ brother Nick also showed up at the event with his wife Priyanka Chopra.

She appeared with her fiance Alex Rodreguez. Dressed in a beaded Versace dress, left nothing to imagination. What stunned the crowd is a thigh-high split in her gown and plunging neckline. A matching headpiece and a 129.48 carat Harry Winston purple sapphire and diamond necklace made her perfect for the occasion.

We are not going to forget her attire any time soon. It was too much to handle. She showed up to the event in a massive hot pink Brandon Maxwell gown. It was so massive that she had to stripe three layers of it. Her four live outfit changes on the red carpet will surely be remembered more for theatrics and less for a fashion statement.

She arrived like Cleopatra, being carried aloft by a slew of helpers. The ‘Pose’ star took the theme of the event too seriously. Her head-to-toe-gold-squinted jumpsuit has strengthened her reputation of choosing eccentric looks on the red carpet.

The “American Idol” judge, arrived with a full-on chandelier costume, with candlesticks around her head and waist. Her dress set Twitter ablaze as people made puns and memes out of the outfit. Somebody joked that Katy Perry gave us light in the middle of all this darkness.