Home » 30 Most Anticipated Bollywood Movies To Hit Screens In 2021 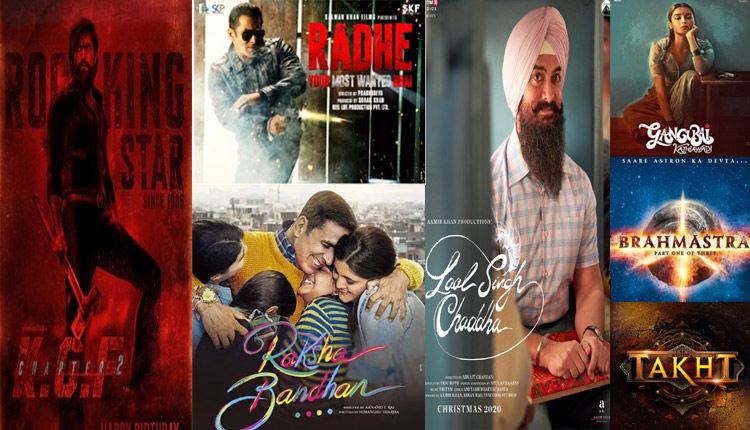 Get ready to go back to the 80’s and hop onto a roller-coaster spy ride, #BELLBOTTOM. Releasing on 2nd April, 2021.

A sequel to the original movie Bhul bhulaiyya

A sports drama directed by Amit Ravindernath Sharma, stars Ajay Devgn essaying the role of Syed Abdul Rahim known as the architect of modern Indian football. National Award winner Keerthy Suresh will be making her Hindi film debut with Maidaan. The film is based on the golden era of Indian football, described from 1952 to 1962.

Director AL Vijay, known for films like Diya and Thalaivaa, made public the tile of his upcoming biopic. Titled Thalaivi.

Cirkus is an upcoming Indian Hindi-language comedy film directed by Rohit Shetty and produced by Reliance Entertainment, T-Series and Rohit Shetty Picturez. The film features Ranveer Singh playing a double role for the first time in his career, with Jacqueline Fernandez and Pooja Hegde as female leads.

Atrangi Re is an upcoming Indian romantic drama film directed by Aanand L. Rai and starring Sara Ali Khan in a double role opposite Akshay Kumar and Dhanush.

Sooryavanshi traces the acts and serious antics of DCP Veer Sooryavanshi, the chief of the Anti-Terrorism Squad in India.

9. Radhe: Your Most Wanted Bhai

After taking the dreaded gangster Gani Bhai, ACP Rajveer Shikawat aka Radhe goes on a manhunt to find the wealthiest man of the town secretly running a crime syndicate.

The blood-soaked land of Kolar Gold Fields (KGF) Has a new overlord now. Rocky, whose name strikes fear in the heart of his foes. His allies look up to Rocky as their Savior, the government sees him as a threat to law and order; enemies are clamoring for revenge and conspiring for his downfall. Bloodier battles and darker days await as Rocky continues on his quest for unchallenged supremacy.

A story on the purest relationship ever.

16. The Song Of Scorpions

Nooran, carefree and defiantly independent, is a tribal woman learning the ancient art of healing from her grandmother, a revered scorpion-singer. When Aadam, a camel trader in the Rajasthan desert, hears her sing, he falls desperately in love. But even before they can get to know each other better, Nooran is poisoned by a brutal treachery that sets her on a perilous journey to avenge herself and find her song.

Based on Prithviraj Raso, a biopic of legendary Hindu warrior king “PRITHVIRAJ CHAUHAN” which captures his early life, military accomplishments, marriage to Sanyukta and battle with Muhammad of Ghor who led the Islamic conquest of Hindustan (India).

Satyameva Jayate 2 is an upcoming Indian Hindi-language vigilante action film serving as a sequel to the 2018 film Satyameva Jayate and based on the fight against injustice & misuse of power.

Intertwined between the emotions of love, ambition, and greed, Takht, a magnum opus, is a family saga set in the Mughal era, where a brother is betrayed by another brother for the sake of Power (Takht). Starring Anil Kapoor, Ranveer Singh, Kareena Kapoor Khan, Vicky Kaushal, Bhumi Pednekar, Alia Bhatt and Janhvi Kapoor in prominent roles, it is a drama directed by Karan Johar.

The story of India’s incredible cricket World Cup victory in 1983.

The film revolves around the life of Gangubai Kothewali, a powerful woman in the 60s, who was also known as the ‘Madam of Kamathipura’ for her connections with the underworld.

Farhan Akhtar plays a boxer in this fictional drama

Janhvi Kapoor has begun shooting for the horror-comedy Roohi Afza, in which she stars alongside Rajkummar Rao and Varun Sharma.

Arjun, a talented but failed cricketer, decides to return to cricket in his late thirties driven by the desire to represent the Indian cricket team and fulfil his son’s wish for a jersey as a gift.

Chandigarh Kare Aashiqui is an upcoming Indian Hindi-language romantic drama film directed by Abhishek Kapoor and produced by T-Series in collaboration with Guy In The Sky Pictures. Featuring Ayushmann Khurrana and Vaani Kapoor in lead roles, the movie was officially announced in July 2020.

A fictitious story about two legendary revolutionaries and their journey away from home before they started fighting for their country in 1920’s.