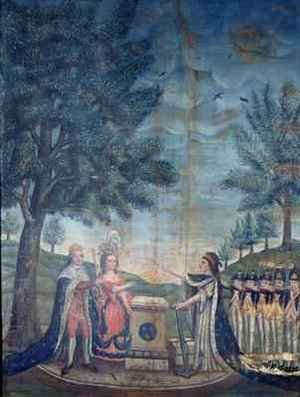 The French Revolution, which began in 1789, was a time of political and social upheaval that extended to every part of the nation.

The democratic beliefs that spurred the revolution impacted all areas of life in France at the time, including art.

Each Dubois painting is a reminder of that impact, as well as the continued influence that the French Revolution has had on the world. 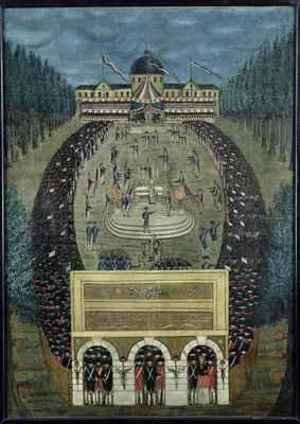 Known as Festival of the Federation in English, this holiday was celebrated throughout France in 1790.

It was the precursor to Bastille Day and celebrated the historic change in government that resulted from the French Revolution.

This work functions as a visual celebration of the festival. It depicts the event as it took place at the Champ de Mars, a large public space that was outside of Paris at the time.

Individuals can be seen pouring into the area on either side, inspired by the massive crowds that were in attendance of the actual event.

Numerous members of the French National Guard are shown, reminiscent of the many soldiers that were sent to represent their regiments at the festival.

2. France Receiving The Wishes Of The Nation From The Three Orders And Presenting Them To Louis Xvi And Jacques Necker 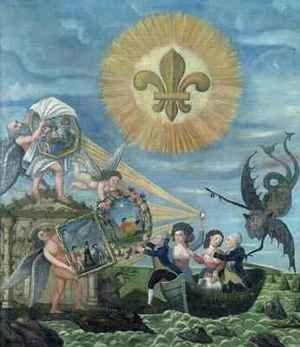 A major driving force for the French Revolution was the rigid system that divided citizens into one of three estates.

It was difficult for many members in the estate system to have their voices heard, spurring resentment of the king. It was this resentment that is embodied in this painting.

This painting depicts France, who is personified as a woman, handing a paper to king Louis XVI and his finance minister, Jacques Necker. The paper symbolizes a list of wishes held by the French in regard to how they are led.

Dubois paints this scene in a hopeful light, giving the viewer a window into the emotions held by French citizens at the time of the revolution.

3. The Hope Of Happiness Dedicated To The Nation With Louis XVI (1754-93) Driven By Goodness And Jacques Necker Driven By Truth 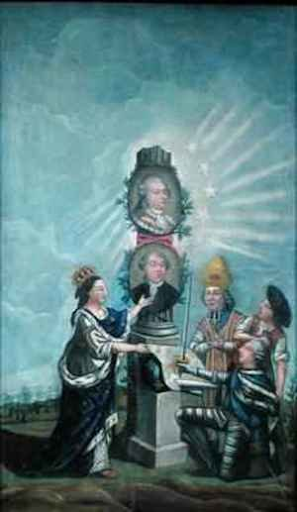 This is another Dubois painting that is full of symbolism of the French Revolution. The fleur-de-lis, the symbol of France, is depicted as a sun shining in the sky.

This symbolism shows a deep pride in the nation, a feeling echoed by many during the revolution.

The left side of the painting depicts three heavenly figures holding works of art. The creatures appear to be handing those paintings to Louix XVI and Jacques Necker.

As the title suggests, this work depicts Dubois’s hope that happiness and peace could prevail against political oppression.

As the goal of the revolution was to achieve a more democratic system of government, there was hope that Louis XVI and his cabinet could rise to the occasion. By painting the King and Necker in a positive light, Dubois showed that he believed that to be possible. 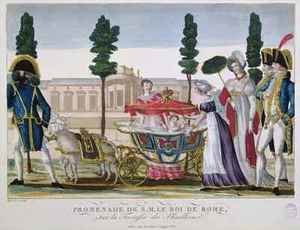 This work makes use of some famous french architecture to convey emotions. The Tuileries Palace, which housed many royal and imperial rulers in France, is seen in the background of this painting.

The titular king of Rome is Napoleon II, who ruled in the early nineteenth century. Napoleon II is depicted as an infant in the painting, riding in a small carriage pulled by young horses.

The opulence of the carriage and palace are shown to display the vast inequality between those in the Three Estates and the nobility.

Despite having never actually ruled France, his status as the Emperor’s son made him an example of the disparity between the classes of French society.

5. Oath Of The King The Queen The Nation And The National Guard At The Festival Of The Federation

This is another Dubois work to focus on the fest of the federation. The spirit of the holiday is embodied in his depiction of the events that took place before the massive celebratory feast.

The festival began with a mass and the taking of oaths to uphold the new constitution. Louis XVI, Marie Antoinette, and deputies of the National Assembly took an oath that was witnessed by the National Guard and festival-goers.

This painting depicts this oath, with the King and Queen standing opposite of the National Guard.

France is once again personified as a woman, who is shown standing on the right with the National Guard. This work evokes feelings of hope in the viewer, meant to echo those felt by the nation of France during this event.

The French Revolution had a significant impact that lasted for decades after the initial events.

Not only was this impact felt politically and socially, but it was also felt throughout the art world.