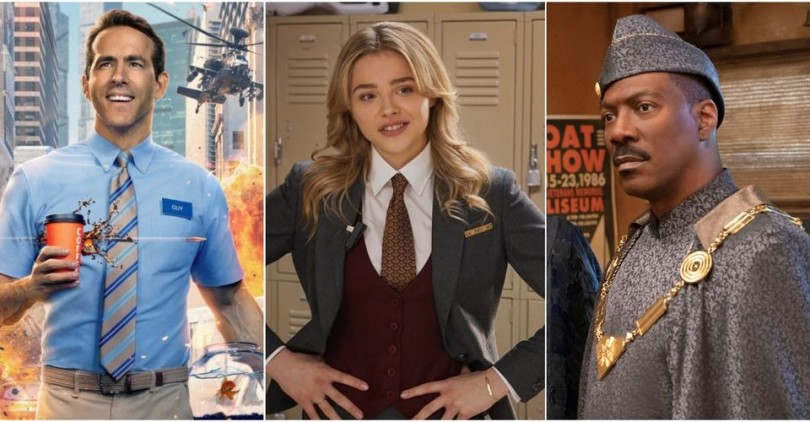 These are the 20 most anticipated comedy movies that will be released in 2021 and are expected to hit Laugh-O-Meter.

1. The Man From Toronto

The world’s deadliest assassin and New York’s biggest screw-up are mistaken for each other at an Airbnb rental.

A modern musical version of the classic fairy tale “Cinderella”.

When a single mom and her two kids arrive in a small town, they begin to discover their connection to the original Ghostbusters and the secret legacy their grandfather left behind.

In a world where monster wrestling is a global sport and monsters are superstar athletes, teenage Winnie seeks to follow in her father’s footsteps by coaching a loveable underdog monster into a champion.

You May Also Like This: 15 Best Action Comedy Movies You Should Watch In 2022

A samurai hopes to make his dreams come true, but goes through trials to defeat enemies.

7. Minions: The Rise Of Gru

In the heart of the 1970s, amidst a flurry of feathered hair and flared jeans, Gru (Steve Carell) is growing up in the suburbs. A fanboy of a supervillain supergroup known as the Vicious 6, Gru hatches a plan to become evil enough to join them. Luckily, he gets some mayhem-making back-up from his loyal followers, the Minions. Together, Kevin, Stuart, Bob, and Otto – a new Minion sporting braces and a desperate need to please – deploy their skills as they and Gru build their first lair, experiment with their first weapons, and pull off their first missions.

A stripper named Zola embarks on a wild road trip to Florida.

Mark, a low end South London hitman recently released from prison, tries to go straight for his daughter, but gets drawn back in by Alan, his former cellmate, to do one final job.

The story of best friends Barb and Star, who leave their small Midwestern town for the first time to go on vacation in Vista Del Mar, Florida, where they soon find themselves tangled up in adventure, love, and a villain’s evil plot to kill everyone in town.

Based on Disneyland’s theme park ride where a small riverboat takes a group of travelers through a jungle filled with dangerous animals and reptiles but with a supernatural element.

Kat Valdez is half of the sexiest celebrity power couple on Earth with hot new music supernova Bastian. As Kat and Bastian’s inescapable hit single, “Marry Me,” climbs the charts, they are about to be wed before an audience of their fans in a ceremony that will stream across multiple platforms. Divorced high-school math teacher Charlie Gilbert has been dragged to the concert by his daughter Lou and his best friend Parker Debbs. When Kat learns, seconds before the ceremony, that Bastian has cheated on her with her assistant, her life turns left as she has a meltdown on stage, questioning love, truth, and loyalty.

NBA superstar LeBron James teams up with Bugs Bunny and the rest of the Looney Tunes for this long-awaited sequel.

The African monarch Akeem learns he has a long-lost son in the United States and must return to America to meet this unexpected heir and build a relationship with his son.

In the early years of the 20th century, the Kingsman agency is formed to stand against a cabal plotting a war to wipe out millions.

The sequel to the 2018 film, ‘Peter Rabbit’. After the marriage of Bea and Thomas along with the release of the acclaimed novel based on the adventures of Peter and his friends, Peter is feeling like everyone only sees him as rebellious. So, when Bea and Thomas decide to go on a trip, Peter sees this as an opportunity to go on the run.