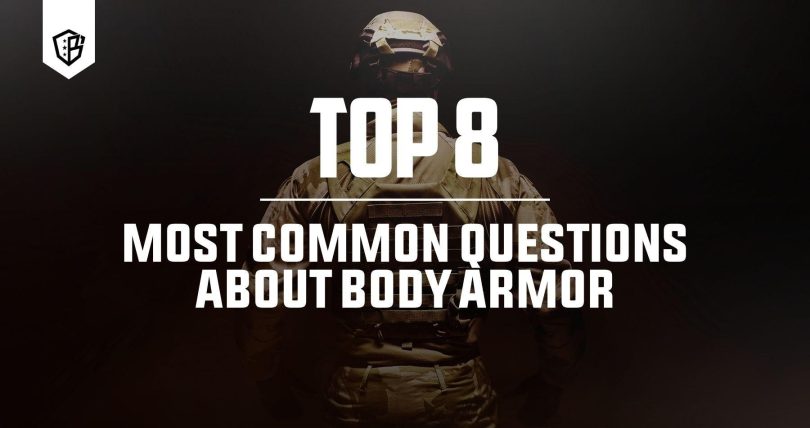 Sales of body armor around the globe have shot up over the past few years. Hardly surprising given the rise in mass shootings, religious terrorism, civil disorder, plus the still raging Russia-Ukraine conflict.

Naturally, before investing in body armor, folks have questions. So we’ve trawled the web to round up a list of the most frequently asked questions about body armor.

And with our years of industry expertise at Bulletproof Zone, we’re here with the answers. Let’s dive right in with the most obvious question of all…

What Is Body Armor?

Basically, it’s any sort of protective clothing designed specially to protect against attacks from:

Although their purpose is always the same, modern-day body armor comes in a range of forms:

And, headgear aside, it consists of the outer carrier garment (made of standard fabrics like cotton, nylon, polyester) and the protective material on the inside.

Humans have been kitting themselves out in protective wear for millennia–originally, animal hides and plant fibers to insulate against harsh weather or to fend off animal attacks; then as armor for warfare.

In the West at least, the oldest known body armor is the bronze plated Dendra panoply from Ancient Greece, which dates back to roughly 1400 B.C.

The Ballistic Vest Is Born

But it wasn’t until 1538 A.D. that the world’s first bulletproof vest was blueprinted by the legendary Italian armorer Filippo Negroli.

Fast forward some 350 years when the use of firearms really took off, a Polish priest by the name of Casimir Zeglen invented a silk bulletproof vest. So sure it would work, he hired a marksman to shoot him in front of the local mayor, chief of police officers, and a buzz of spectators!

The modern bulletproof vest didn’t emerge until the mid-1970s when ex-military personnel, Richard Davis, had the idea after getting into a shoot-out with a trio of armed robbers while he was delivering pizza! The Second Chance Model Y bulletproof vest was made exclusively of a material discovered a decade earlier and which has since revolutionized body armor. It’s name? Kevlar. And on that subject…

What Is Body Armor Made Of?

Generally, the materials that make up modern body armor can be grouped as:

Compared to hard armor, soft armor is a lot more flexible and lightweight, although not as protective. Because of this, soft body armor is meant for daily use.

Body armor tech is constantly evolving, though. Space-age materials, such as graphene and carbon fiber, are already featured in some brands of body armor.

Not to mention, research continues into stuff like shear thickening fluid (AKA liquid armor), artificial spider silk, and even bulletproof slime inspired by the oceanic hagfish that secretes a mass of goo as a defense mechanism against predators!

How Does Body Armor Work?

In both cases, the back face absorbs some of the force of the bullet or knife (so less is transferred to the body) then spreads it across the entire panel/plate (so it’s not all focused in one small spot).

On a related note, some bulletproof vests and plate carriers come with a special pocket in the front and sometimes the back and sides that can hold what’s known as a trauma pad.

They’re made mainly of plastic, fabric, or foam and inserted behind body armor plates/panels. A must-have for military personnel and police officers, trauma pads help further reduce the impact of whatever hits the armor; this way, the risk of injury (from so-called blunt force trauma) is even more reduced.

Indeed it does! It’s because the material that makes up the armor just naturally breaks down over time.

Beyond that, body armor doesn’t suddenly stop working, but there’s no guarantee that it’ll offer the same degree of stab or ballistic protection.

Besides the material itself, how long body armor can be relied on to do its job also depends on its upkeep and use – if it’s not maintained or stored correctly and worn a lot, then it won’t last as long.

Similarly, if body armor gets damaged from exposure to excessive heat, moisture, or UV rays, takes a bullet or a stabbing, or no longer fits properly, you should replace it.

Believe it or not, most aren’t! You see, the average soft armor bulletproof vest just isn’t cut out to also protect against a stab; knives and other edged/bladed weapons will slice right through the material that makes up such a vest.

Body Armor That Will Stop A Knife

Fear not! There are dedicated stab and slash-resistant vests, as well as so-called hybrid or dual-threat/multi-threat vests.

Thanks to their separate layers of reinforced soft armor, these will stop bullets from most small firearms and everything from knives, scalpels, and box cutters to hypodermic needles, ice picks, and screwdrivers.

Of course, hard armor is all but impervious to sharps, too. Though they’re not officially rated against knives and spikes, the armor plates are made of substances too tough for them to get through.

Can Bulletproof Vests Stop All Bullets?

Absolutely not! Just to be clear: no body armor on earth is truly bulletproof; strictly speaking, it’s
bullet resistant.

According to the United States National Institute of Justice, the max ballistic protection for soft armor is Level IIIA, the panels of which can stop handgun rounds up to a .44 caliber Magnum, 12-gauge shotgun slugs and, unofficially, even a .50 caliber Desert Eagle.

Protection Against Other Kinds Of Guns

Even then, Level IV body armor plates can’t normally take a hit from an armor-piercing round fired from an AK-47 Kalashnikov, for example, unless used together with a Level IIIA vest. 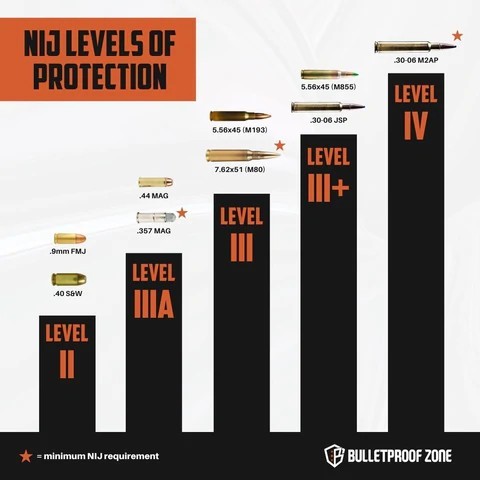 What’s more, the highest-powered rifle and machine gun rounds will easily blast a hole in the thickest Level IV body armor; and even if it did miraculously manage to halt the bullet, the shock wave from the impact would almost certainly prove lethal.

As it happens, a great many civilians from all walks of life already do! Some wear body armor for their profession when assisting with law and order or when protecting cash/valuables – in particular:

Others put on body armor for no other reason than peace of mind – most notably:

As per federal body armor law in the U.S., if you’re 18 or over and haven’t been convicted of a violent felony, you’re free to buy, own, and wear it in public.

Or to put it another way, it’s perfectly legal for a civilian to sport a tactical ops plate carrier complete with NIJ Level IV hard armor plates in the open – with some exceptions:

As for elsewhere, it depends. In many other countries, it’s just as legal for regular citizens to buy and wear body armor:

Whereas you’ll need a special permit to buy and/or wear body armor in these places:

So there you have it: a little Q and A about body armor.

But do feel free to contact us at Bulletproof Zone if there’s anything else you need to know about body armor that’s not covered here!