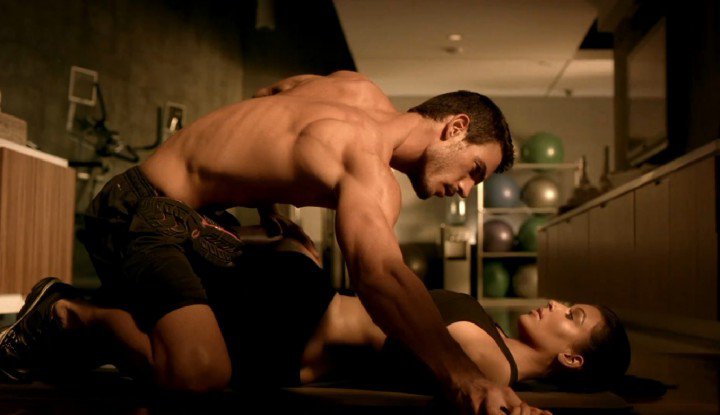 These are the raunchiest Super Bowl commercials of all-time.

You can’t beat the original. Cindy Crawford pulls up in a red sports car to a gas station on the outskirts of town. She gets out, wearing a white tank top and Daisy Duke shorts. Two boys playing near the store look on in awe as if they’re losing their virginity at that very moment. She walks up to a vending machine, puts money in, leans backs and chugs. The spot ends with one of the kids saying, “Is that a great new Pepsi can or what?” Now what’s more American then that!?!

Playing off of Janet Jackson’s wardrobe malfunction of 2004, this spot launched the GoDaddy Girl (former WWE Diva Candice Michelle) into the national spotlight. Appearing on a C-SPAN-like show, the brunette buxom appears in a low-cut tank top with the words ‘Go Daddy’ spattered right on her boobs. One of her spaghetti straps pops off, and the crowd gasps.

Classic girl argument over Miller Lite’s attributes of having ‘great taste’ and ‘less filling’. These girls get so worked up over it that they take their argument into a nearby fountain and proceed to rip each other’s clothes off—which is pretty much how all arguments with busty friends escalates, right? The fight then moves to a pool of cement that suspiciously resembles mud. The end of the commercial cuts to two guys saying, “Now that would make a great commercial”.

Wow, we’re really dating ourselves here. Anyway, this banned spot advertised the Spicy BBQ Six Dollar Burger from Carl’s Jr., with Hilton gyrating and humping the car Tawny Kitaen-style while doing a shit-job washing a sweet car. As the ‘it’ girl at the time, she could do no wrong in the eyes of many pubescent boys.

You May Also Like : How To Watch The Super Bowl Online! 10 Apps To Stream Live

This banned spot was supported by the message, “Studies show vegetarians have more sex”. We didn’t verify this, but, suddenly, we’re craving broccoli. The video shows girls in lingerie licking pumpkins, caressing themselves with asparagus and throwing a bunch of veggies in a hot tub.

No one is powerless to resist the temptation that is Kim Kardashian’s booty! Want to know the secret to KK’s ass? Skechers.

We just can’t imagine why this was banned. Oh wait, yes we can. Thank goodness there’s YouTube to let us (and more than 13 million other viewers) ogle longingly over those, um, hamburgers.