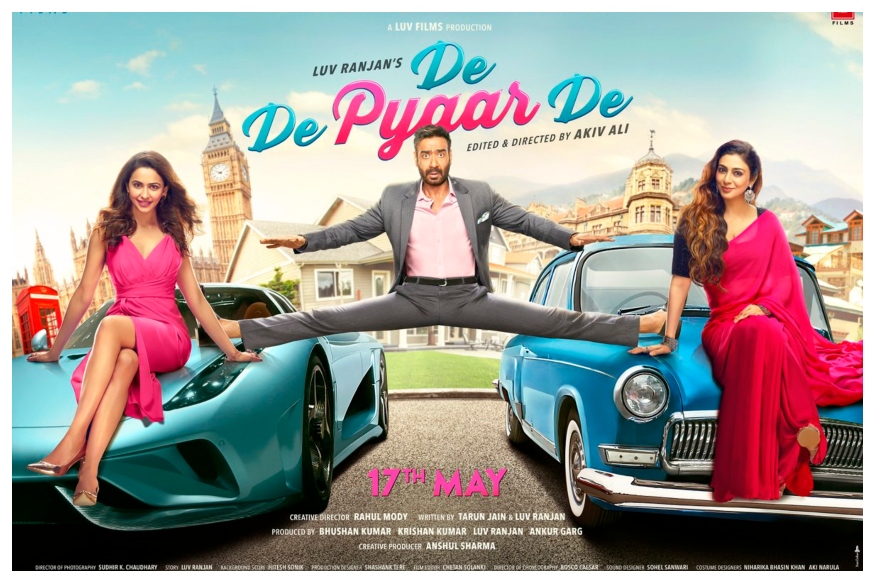 Directed by Akiv Ali, De De Pyaar De explores various facets of a relationship. It features Ajay Devgan, and Rakul Preet Singh. In this film, the director gets two women (Rakul Preet Singh and Tabu) shame each other, all for a 50-year-old single father (Ajay). Ajay falls in love with a 26-year-old woman, played by Rakul. Tabu stars as the Ajay’s character’s former wife.

Ajay is caught between his loyalty for Rakul Preet and Tabu, while he tries to move away from his ever-vigilant and sarcastic family.

Ajay Devgan is in top form who played his age and have the last laugh, even as he lets the audience laugh at him for being repeatedly called Buddha and ‘Uncle’ in the film.

The movie is more effective as a comedy about moving on and finding new soulmates. Tabu and Devgan have some nice scenes together, and their grown-up ways are a welcome relief from Rakul Preet Singh’s forever-young mugging.

It’s not a one-sided love story that has a man dating his beti ki umar ki ladki. It’s a full-fledged love affair that has all the trappings of a meet cute romance and more. What starts as harmless flirting between two starkly different personalities, leads them to discover that they can be more than just a habit for each other. This is pretty much what the first half of ‘De De Pyaar De’ (DDPD) is all about.

Ajay Devgan’s chemistry with a young and vivacious Rakul Preet Singh doesn’t feel out of place. She compliments Devgn’s suave charisma with confidence and glamour. Like in every film, Tabu excels in this one too, with her understated performance and measured expressions.

Akiv Ali’s directorial debut revolves around a London-based 50-year-old investment broker (Ajay Devgan) who falls in love with a 26-year-old engineer (Rakul Preet), who moonlights as a bartender on weekends.

A few pillow fights, massages and shopping sprees later, Ashish, on a whim, decides to make Aisha meet his ex-wife Manju (Tabu) and his two kids [who are almost the same age as his current flame] in India. But all hell breaks loose when he tries to seek approval from his estranged family.

Since the beginning of his career, Luv Ranjan has been accused of serving an anti-women sentiment in the name of comedies. So, it seems Ranjan thought it’s only fair he goes one step ahead and normalises misogyny by turning women against one another.

With De De Pyaar De, the writer-director gets two women (Rakul Preet Singh and Tabu) shame each other, all for a man (Ajay Devgn).

So, while we have Tabu’s Manju taunting Rakul’s Aisha for falling in love with her estranged husband Ashish (Ajay), who is 20 years older than her, the latter shames her for being “purani gaadi jiski maintenance karwani padhti hai.”