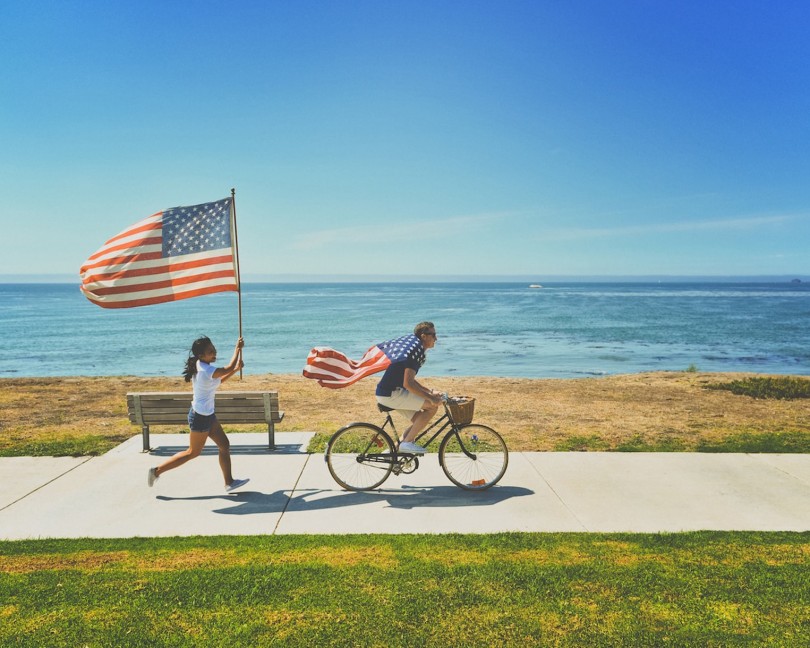 Generally, we define the term American dream as having money and other securities, but the message behind this term is different for every individual. It is more about having your own version of success, no matter where you come from.

A long list of great people including authors, historians, and logicians have tried to explain this concept of the American dream.

You must have noticed politicians using this term at the time of elections to provide assurance to the public. We have come up with these famous American dream quotes that inspire you to transform your dreams into reality.

Living your struggles and achieving your goals, small or big can be defined as an American dream. It is about having compassion and confidence while handling difficult situations and finding solutions.

The following quotes about the American dream and immigration quotes will help you stay motivated throughout your journey.

Quotes About The American Dream

1. “Welcome to our America. A land vastly different from what they want us to believe about her.” ― A.K. Kuykendall

2. “Everyone must have a shot at the American Dream.” ― Howard Schultz 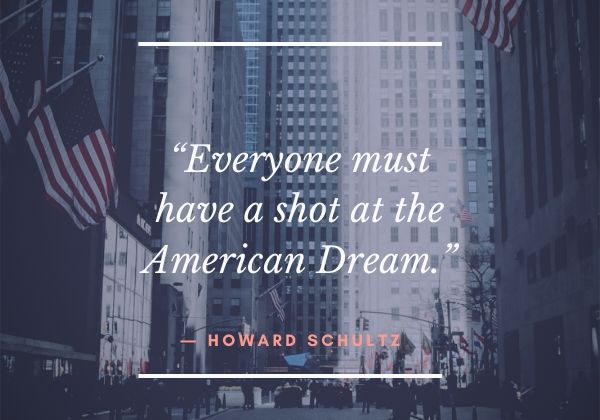 3. “I grew up with a front-row seat to the American dream.” ― Mike Pence

4. “We believe in the American Dream, not in the socialist nightmare.” ― Donald Trump

5. “The American dream of rags to riches is a dream for a reason – it is hard to achieve; were everyone to do it, it wouldn’t be a dream but would rather be the reality.” ― Robert Fulton

6. “Socialism never took root in America because the poor see themselves not as an exploited proletariat but as temporarily embarrassed millionaires.” ― Ronald Wright

7. “The American Dream never really existed. It was a marketing scam.” ― James Altucher 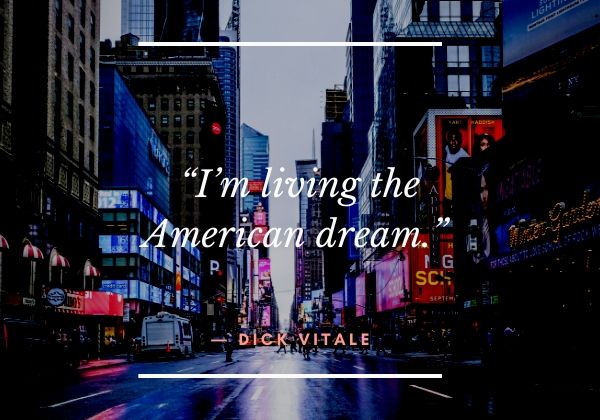 9. “My story is the American Dream, a hundred percent.” ― Jeremy Scott

10. “If you want to do something today to radically improve the United States of America, walk on the right.” ― Dan Johnson

11. “America is big enough to accommodate all their dreams.” ― Barack Obama

12. “In my heart, I am American, and I believe I have a free will and can take charge of my own destiny.” ― Ruth Ozek 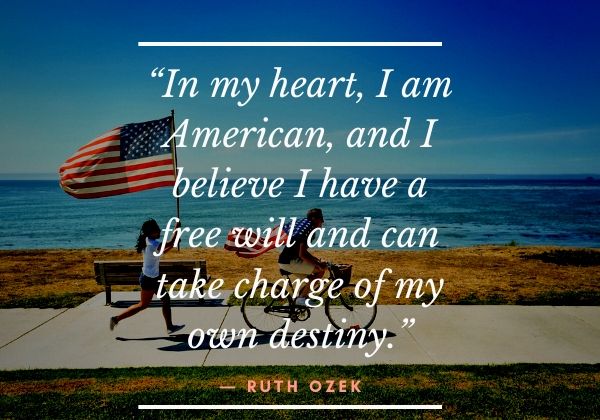 14. “The American dream belongs to all of us.” ― Kamala Harris

15. “The American dream is dead for the majority of America.” ― Suze Orman

16. “Everybody comes here because of the American Dream.” ― Fabio Lanzoni 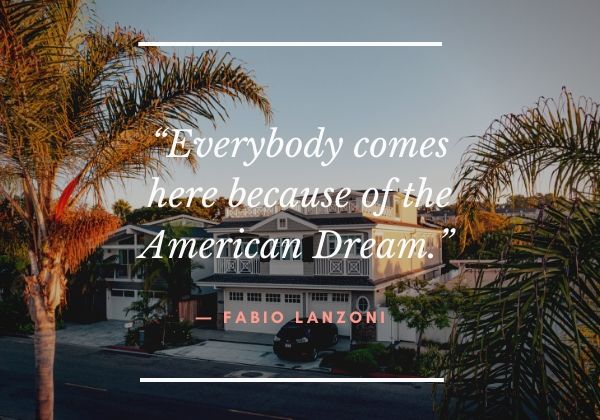 18. “The American dream is under assault.” ― James A. Forbes

19. “And in the end, we were all just humans, drunk on the idea that love, only love, could heal our brokenness.” ― Christopher Poindexter

20. “If our freedom is taken, the American dream will wither and die.” ― Rand Paul

21. “For many, the American dream has become a nightmare.” ― Bernie Sanders 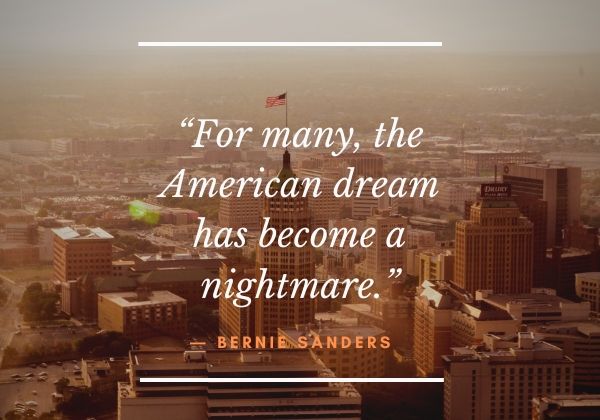 22. “I’m taking a fresh look at the American Dream and who gets to live it and who doesn’t.” ― Helen Prejean

23. “Denying the popular vote is un-American and anti-democratic.” ― DaShanne Stokes

24. “The American dream is about freedom.” ― Nancy Pelosi

25. “I really have the American dream licked.” ― Ted Nugent 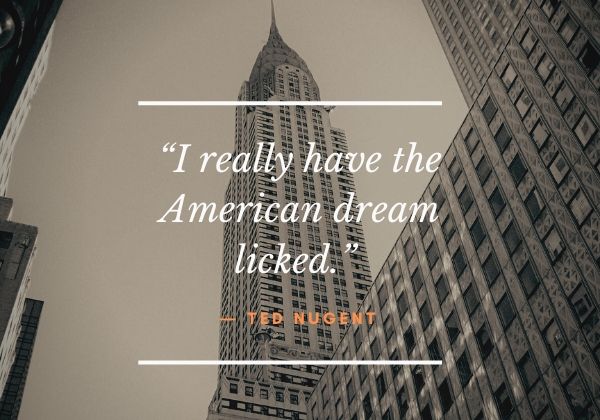 26. “He was going to get the American Dream that even American dream about.” ― Nicola Yoon

28. “I look forward to an America which will not be afraid of grace and beauty” ― John F. Kennedy 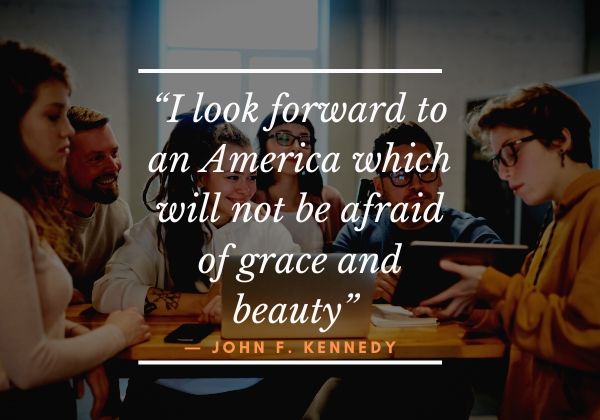 29. “We need to forge the whole new energy and the American Dream.” ― William

30. “The American dream is still to own your home.” ― Barry Sternlicht

Quotes About The American Dream In The Great Gatsby

32. “The American dream does not come to those who fall asleep.”- Gerald R. Ford 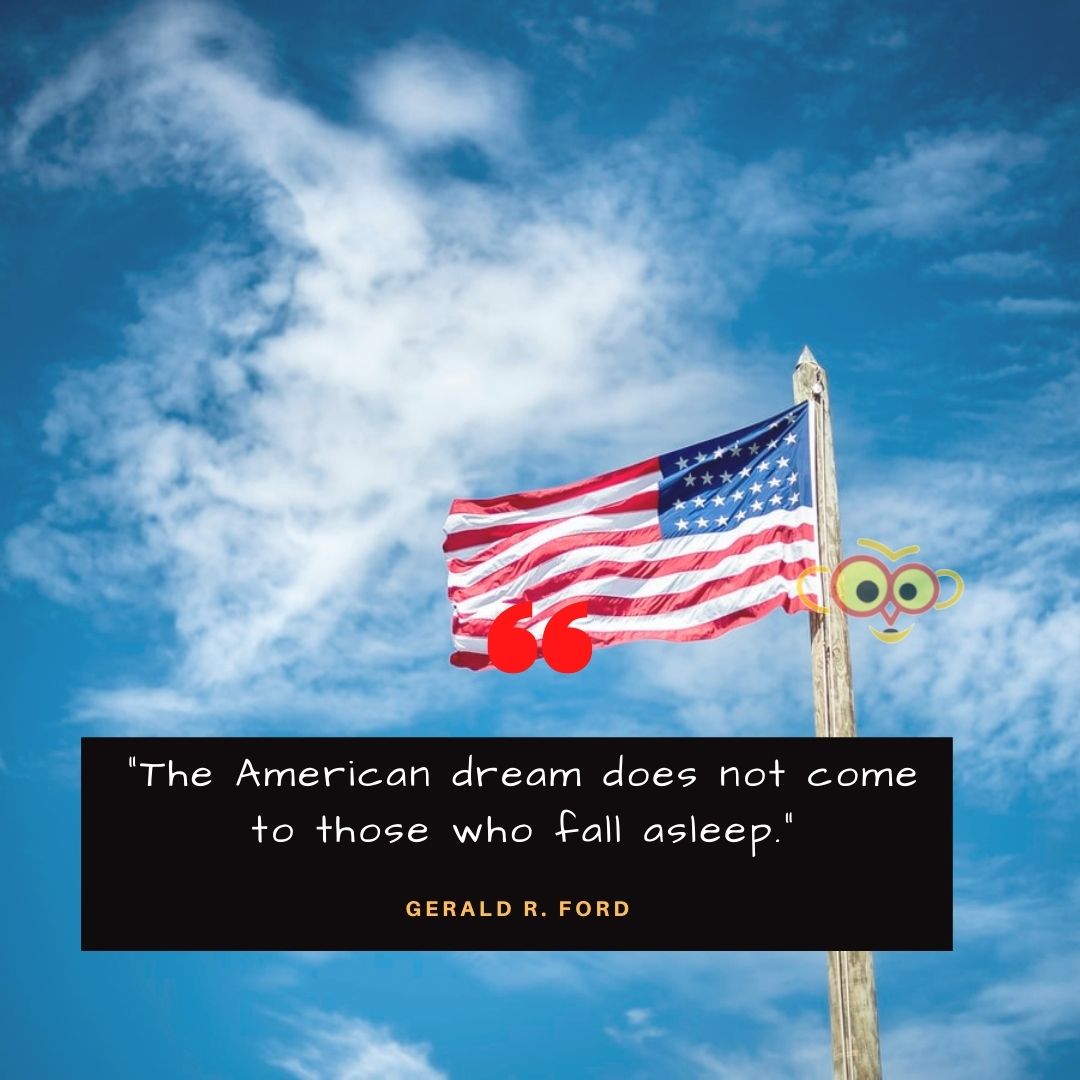 33.  “The American Dream is a term that is often used but also often misunderstood. It isn’t really about becoming rich or famous. It is about things much simpler and more fundamental than that.”-Marco Rubio

34. “The American Dream means giving it your all, trying your hardest, accomplishing something. And then I’d add to that, giving something back. No definition of a successful life can do anything but include serving others.”-George H. W. Bush 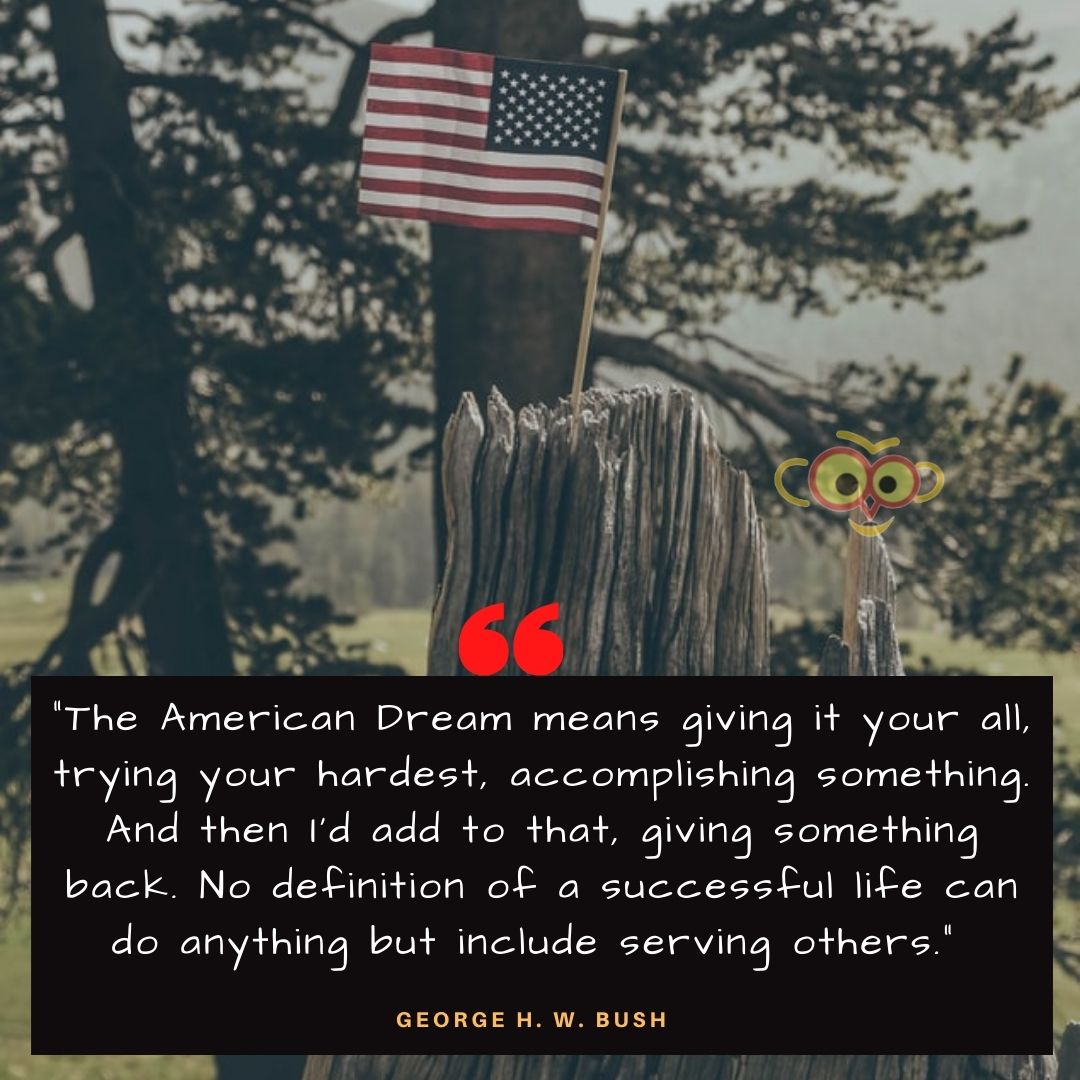 35. “The American dream reminds us that every man is heir to the legacy of worthiness.”- Martin Luther King Jr.

36. “The American dream does not come to those who fall asleep.”-Richard Nixon

37. “We must stop talking about the American dream and start listening to the dreams of Americans.”-Max Beerbohm 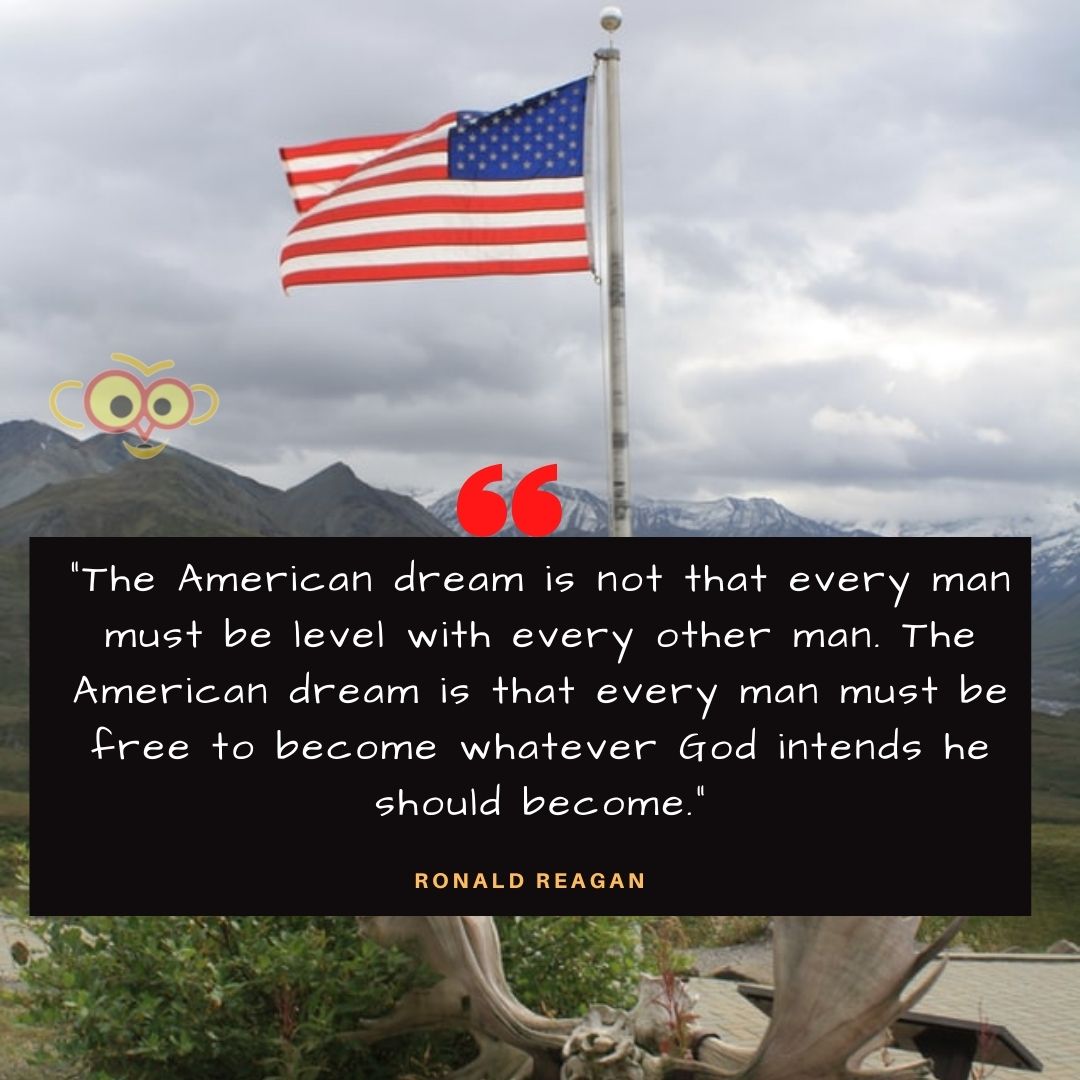 39. “For many, the American dream has become a nightmare.”-Bernie Sanders

40. “The negative side of the American Dream comes when people pursue success at any cost, which in turn destroys the vision and the dream.”-Azar Nafisi

41. “No person can maximize the American Dream on the minimum wage.”-Benjamin Todd Jealous 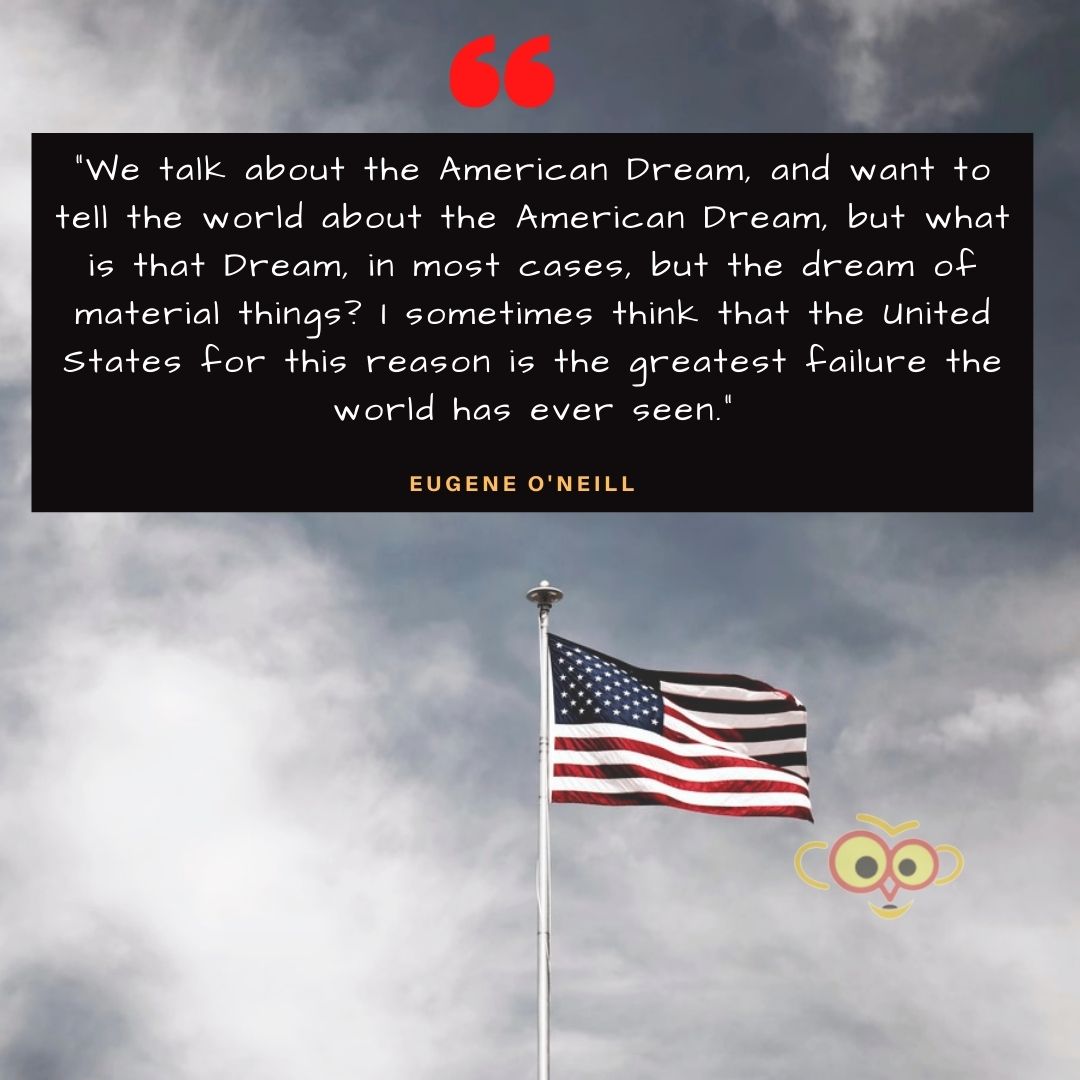 43. “Everybody has dreams. You are living the American dream, what’s wrong with pushing to secure it for everyone?”-Bob Ross

44. “You stuff somebody into the American dream, and it becomes a prison.”-Craig L. Thomas

45. “I hope I epitomize the American dream. For I came against long odds, from the ghetto to the very top of my profession. I was not immediately good at basketball. It did not come easy. It came as the result of a lot of hard work and self-sacrifice. The rewards, where they worth it? One thousand times over.”-Bill Russell 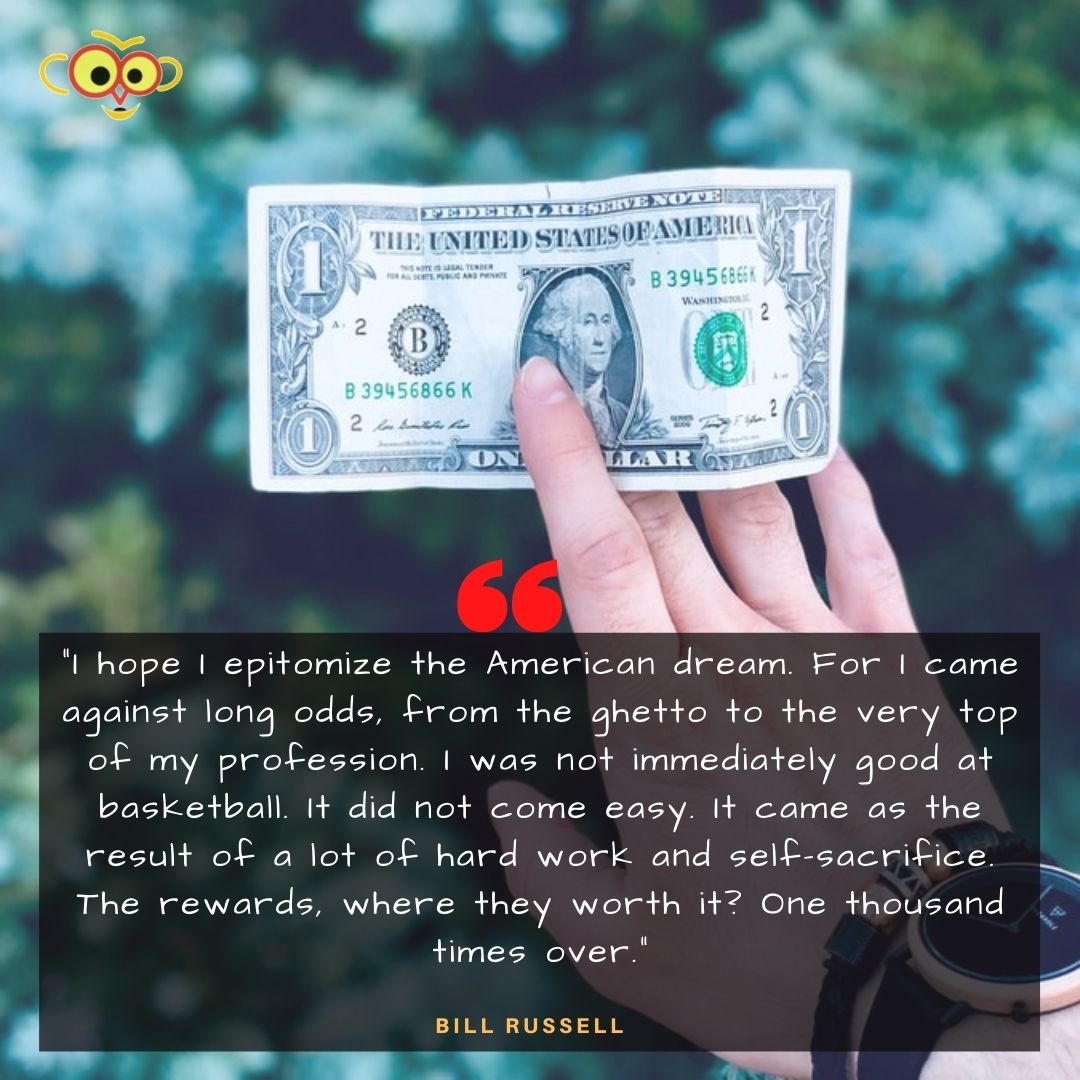 46. “That’s why they call it the American Dream, because you have to be asleep to believe it.”-George Carlin

47. “Success is the American Dream. And that success is not something to be ashamed of, or to demonize.”-Susana Martinez

48. “My dream is of a place and a time where America will once again be seen as the last best hope of earth.”- Abraham Lincoln 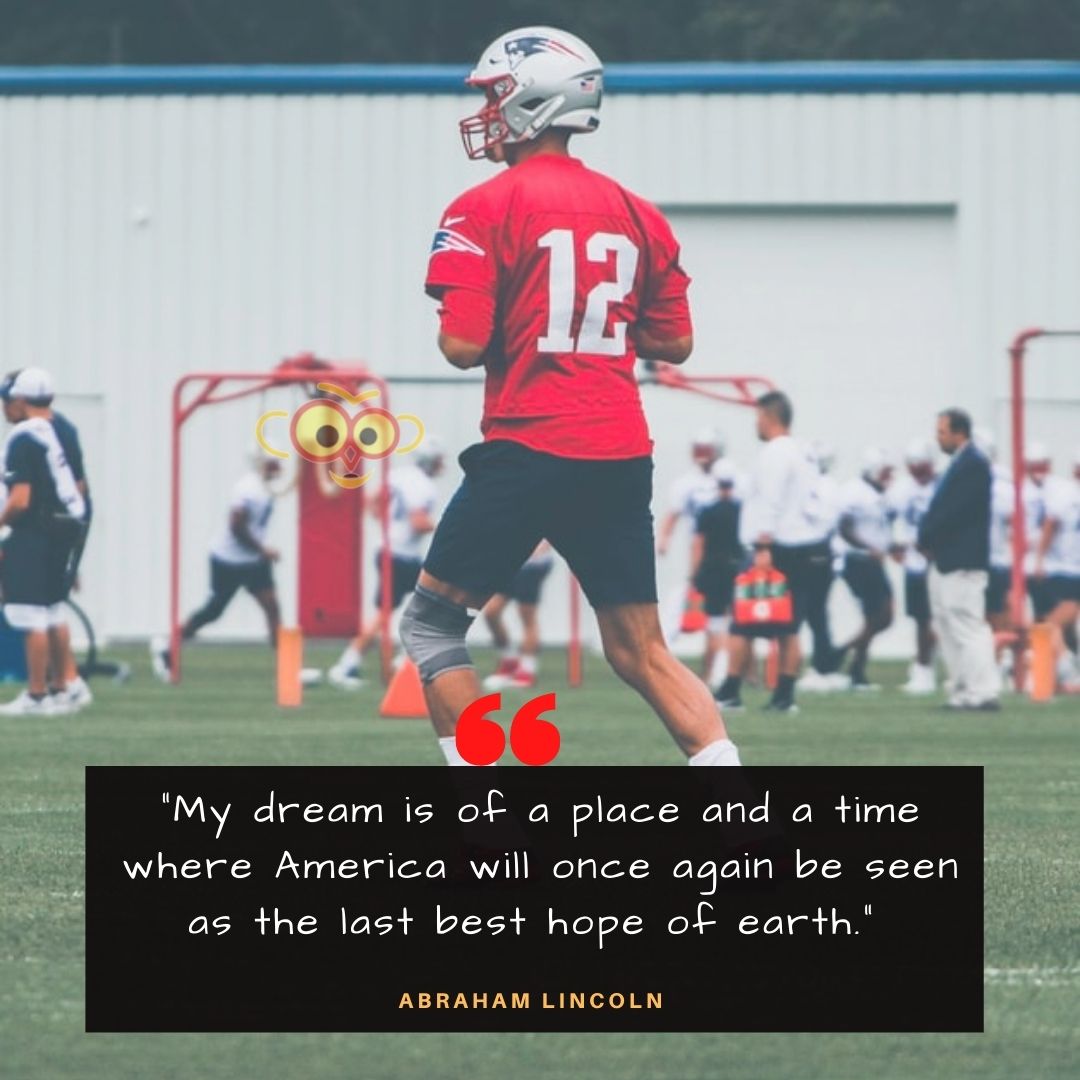 49. “To me, the American Dream is being able to follow your own personal calling. To be able to do what you want to do is incredible freedom.”-Maya Lin

50. “The new American Dream is about having an interesting life, not making a lot of money.”-Penelope Trunk

51. “I am the American Dream. I am the epitome of what the American Dream basically said. It said you could come from anywhere and be anything you want in this country. That’s exactly what I’ve done.”-Whoopi Goldberg 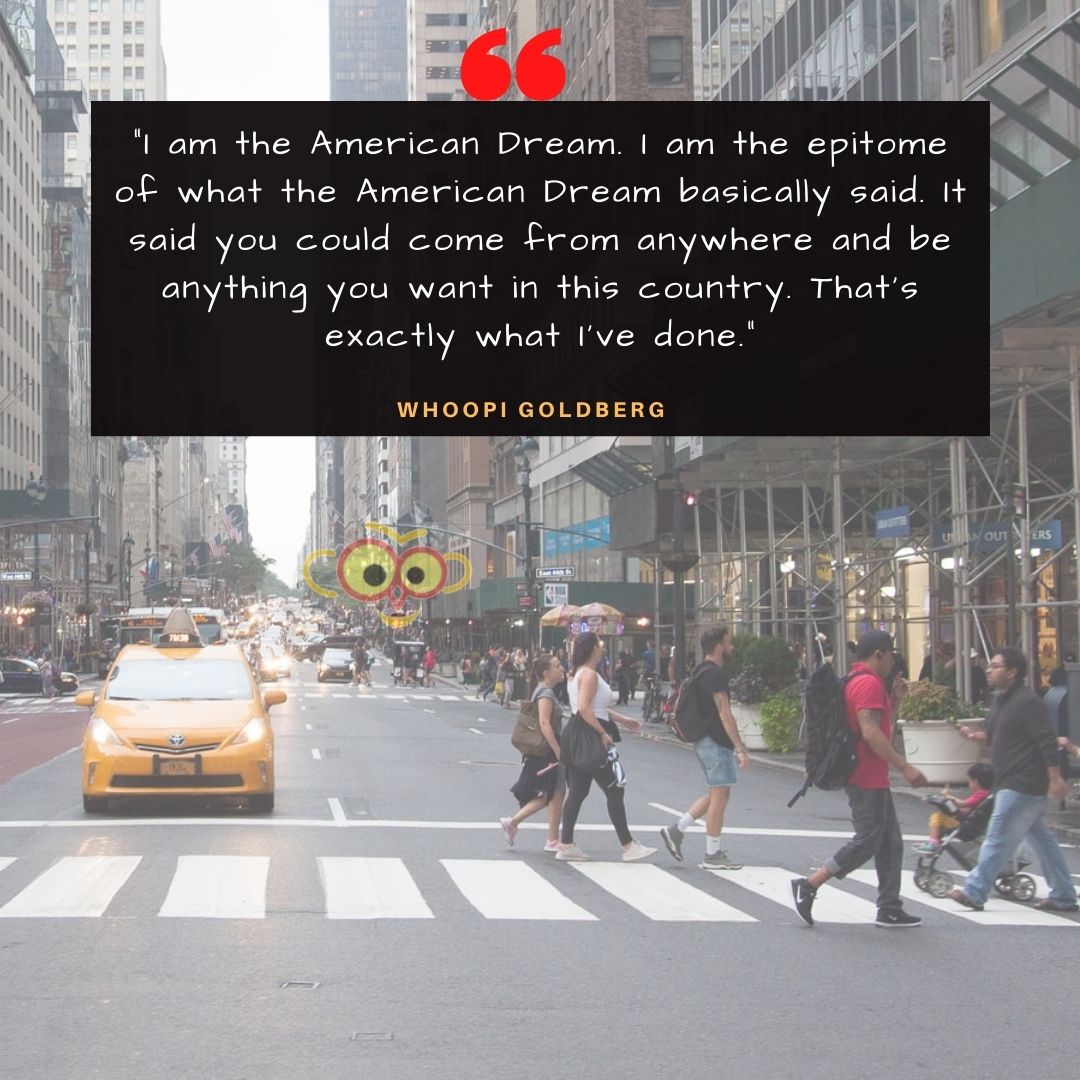 52. “Barack knows the American Dream because he’s lived it, and he wants everyone in this country to have that same opportunity, no matter who we are or where we’re from or what we look like or who we love.” —Michelle Obama 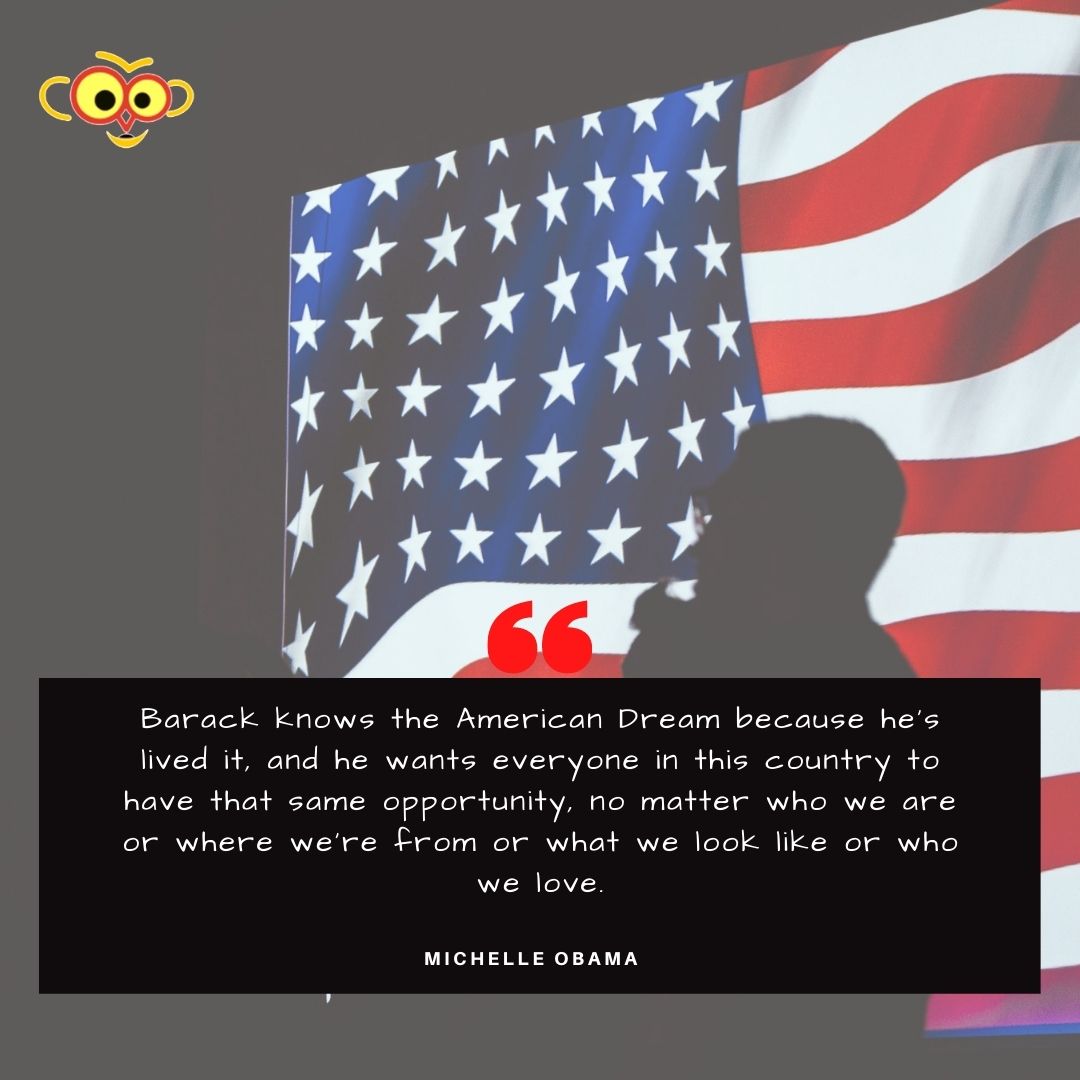 53. “The American Dream is a term that is often used but also often misunderstood. It isn’t really about becoming rich or famous. It is about things much simpler and more fundamental than that.” —Mark Rubio

54. “The American Dream I believe in is one that provides anyone willing to work hard enough with the opportunity to succeed.” —Tammy Duckworth 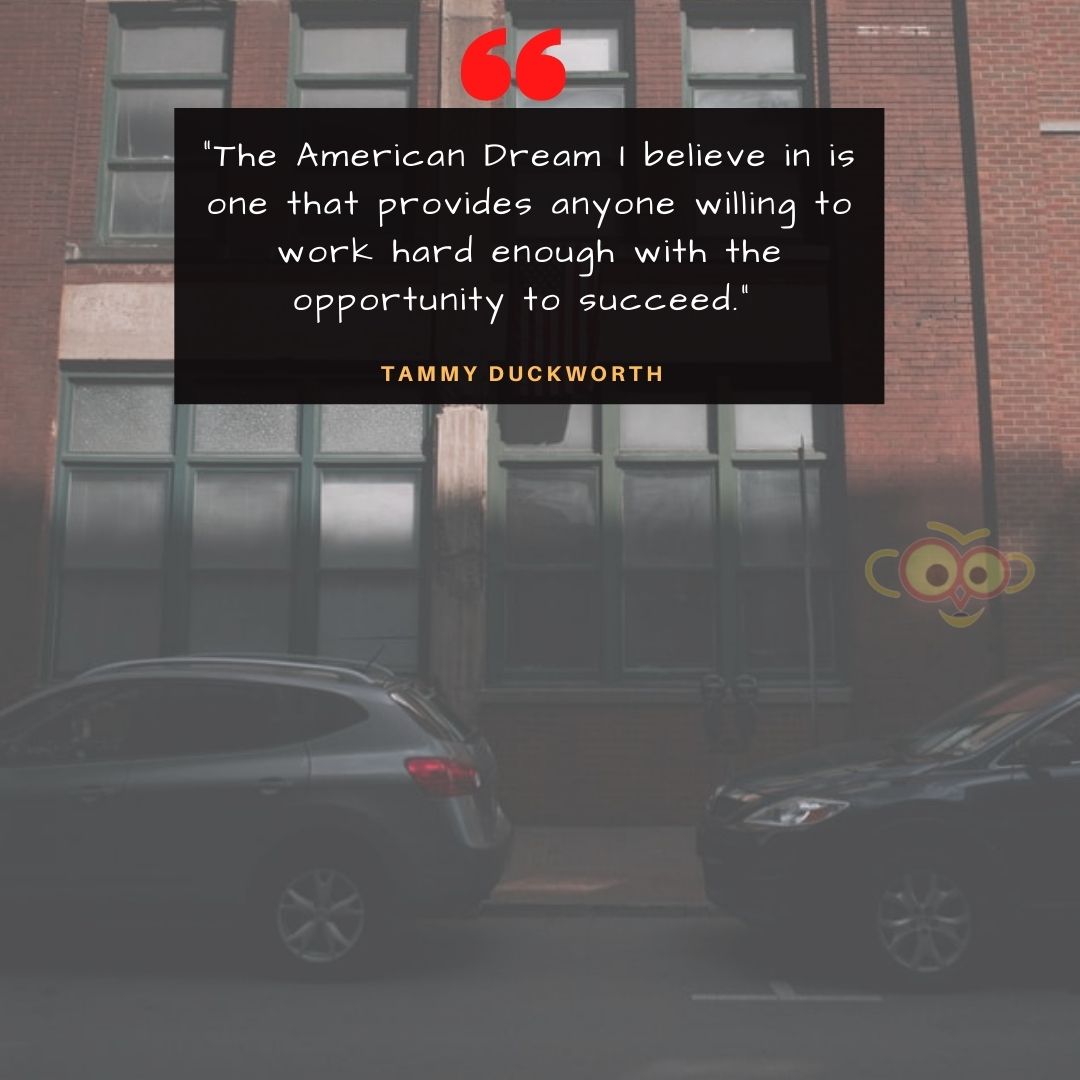 56. “The promise of the American Dream requires that we are all provided an equal opportunity to participate in and contribute to our nation.” —Charles B. Rangel

57. “To realize the American Dream, the most important thing to understand is that it belongs to everybody. It’s a human dream. If you understand this and work very hard, it is possible.” –Cristina Saralegui

58. “John Steinbeck once said that socialism never took root in America because the poor see themselves not as an exploited proletariat but as temporarily embarrassed millionaires.” ― Ronald Wright 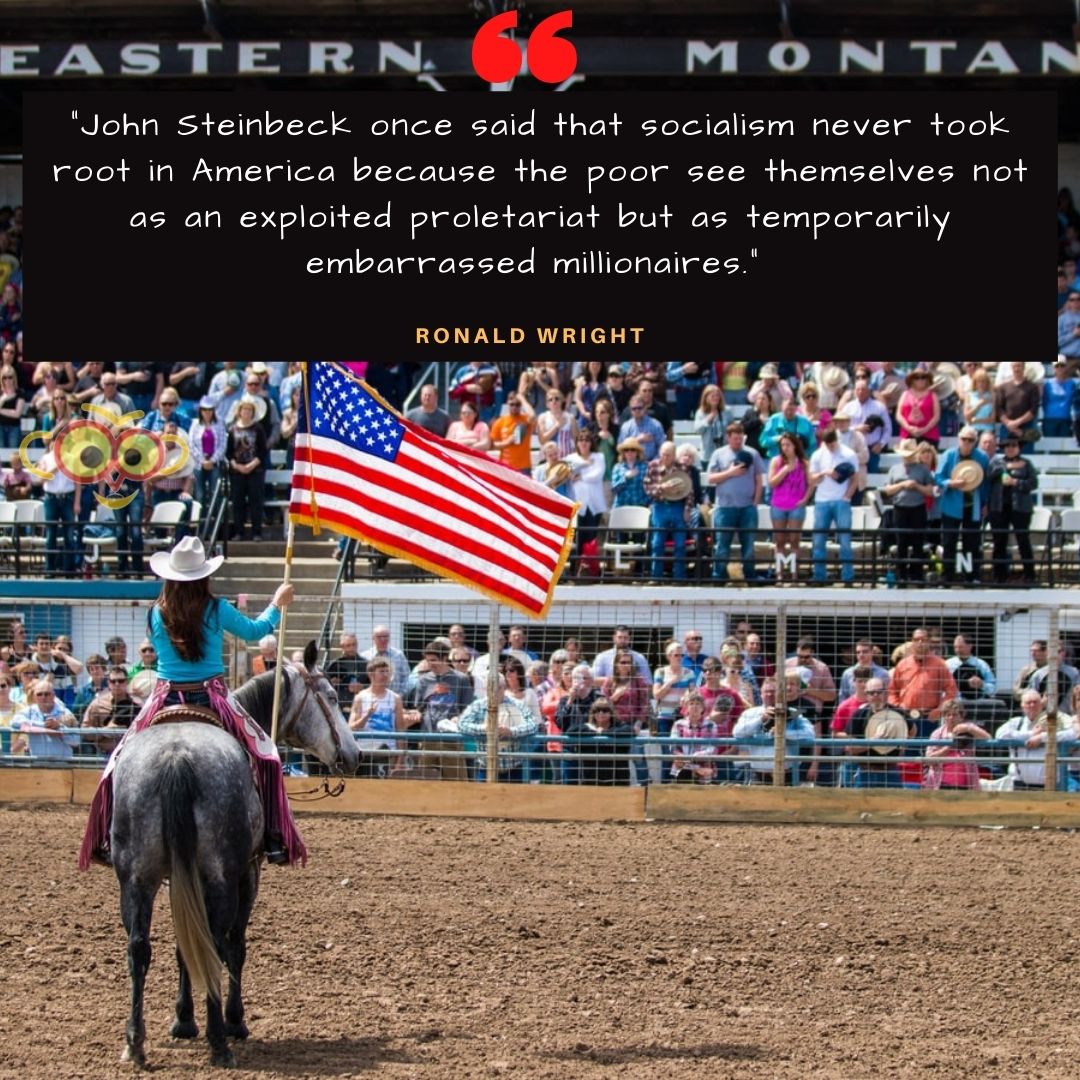 59. “Every now and then when your life gets complicated and the weasels start closing in, the only cure is to load up on heinous chemicals and then drive like a bastard from Hollywood to Las Vegas … with the music at top volume and at least a pint of ether.” ― Hunter S.

60. “If wealth was the inevitable result of hard work and enterprise, every woman in Africa would be a millionaire.” ― George Monbiot 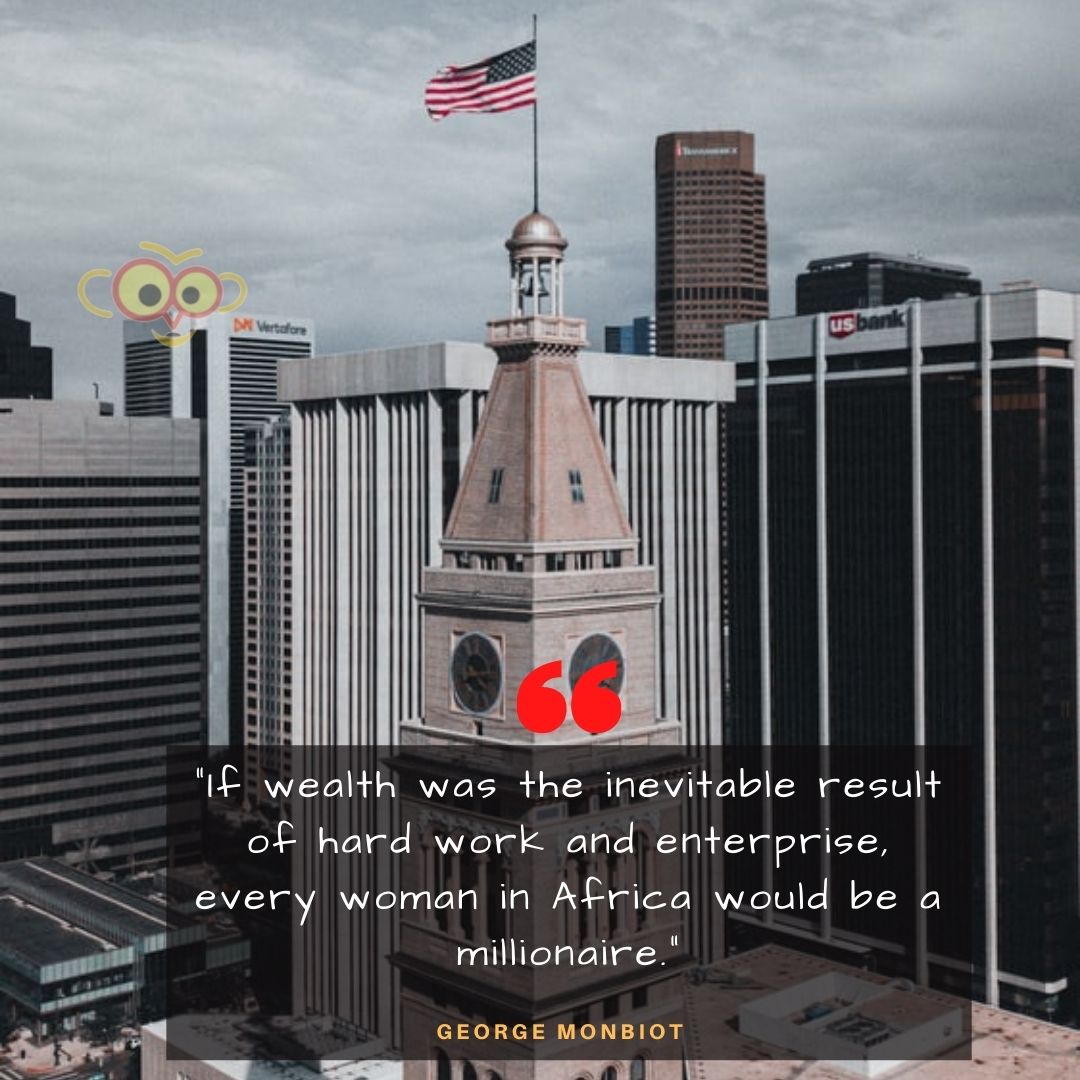