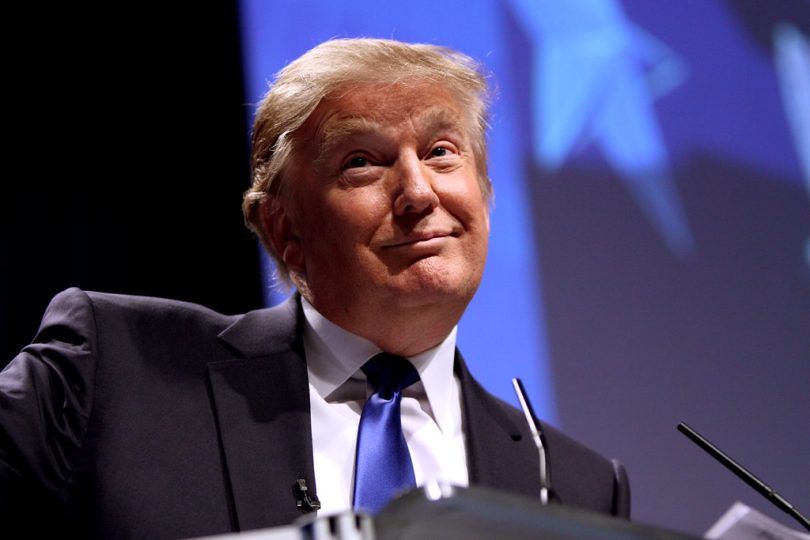 1. What is the difference between Trump and a flying pig?

3. A man goes to Heaven and meets Jesus.

While Jesus is showing him round, he spots a broken clock.

Jesus says “that’s Mother Teresa’s clock it has never moved because she has never lied.”

“Just over here is Abraham Lincoln’s clock. He lied twice, so it has moved twice.”

“Where is Donald Trump’s clock?” asks the man.

Jesus answers: “It’s in my office, I’m using it as a ceiling fan.”

4. “Donald Trump is the weak man’s vision of a strong man.” -Charles Cooke

5. What did Trump rename the Presidential plane?

6. “Donald has attacked every person of color – except John Boehner.” -Joe Biden

7. Donald Trump wants to ban the sale of pre-shredded cheese.

8. “(Donald Trump) might win. He’s got enough ex-wives to vote for him.” -Chris Rock

9. What do you call a Disney Princess that supports Donald Trump?

10. “The closest Trump ever got to battle was his fight with Rosie O’Donnell.” -Jimmy Kimmel

11. Why does Donald Trump take anti-depressants?

12. “Donald Trump likes to sue people. He should sue whoever did that to his face.” -Marco Rubio

According to the brain scan, the left side of his brain has nothing right, while the right side has nothing left.

14. “A guy with the worst spray tan in America is attacking me for putting on makeup.” -Marco Rubio

15. What do you see when you look into Trump’s eyes?

The back of his head.

16. “The good news is, President Obama was born in America. The bad news is, so was Donald Trump.” -Jay Leno

17. What does Trumps hair and a thong have in common?

They both barely cover the •••hole.

18. “Yeah, things are different. Donald Trump is leading in the polls. I’m going back (in a coma).” -Tracy Morgan

20. “I do think Donald Trump is honest in his own way. He is honestly an egomaniacal billionaire.” -Stephen Colbert

Like when he deported a printer because it didn’t have papers.

Because they go all the way to Russia.

24. “Donald Trump is the kind of person who goes to the Super Bowl and thinks the people in the huddle are talking about him.”? -Eric Schneiderman

25. Why can’t Trump stay in the White House anymore?

Because it’s for Biden!

27. “Say what you will about Trump, he is not stupid. He is a smart man with a deep understanding of what stupid people want.” -Andy Borowitz

29. “This is what I’ve been waiting for my whole life. A President who’s not afraid to tell the truth about being a lying asshole!” -Lewis Black

30. “If Donald Trump wins, my guess is America will look a lot like it did in ‘Back to the Future 2,’ when Biff was in charge.” -Jimmy Kimmel

31. “Just got told exactly what Donald Trump is going to do Monday at the RNC. Mother of God. We are finally living in IDIOCRACY.” -Patton Oswalt

32. “Donald Trump really has egg on his face now. Which pairs nicely with the hash browns on the top of his head.” -James Corden

33. “Say what you will about Trump, he is not stupid. He is a smart man with a deep understanding of what stupid people want.” -Andy Borowitz

34. “Maybe he should ease into this … by running for a lower office first, like President of the Hair Club for Men.” -Jimmy Kimmel

35. “Trump had medical deferment [during Vietnam] … he had inter-rectum cranial inversion — which means his head is up his ass.” -Jay Leno

37. “If he hadn’t inherited $200 million, you know where Donald Trump would be right now? Selling watches in Manhattan.” -Marco Rubio

38. ‘Trump NOT Doing FOX Debate Cause Of MEGAN (sic) KELLY… fkng PRIMA DONNA. HOW CAN HE FACE ISIS, HE CANT FACE A CHICK ON TV.” -Cher

40. “This guy has an ego. When Trump bangs a supermodel, he closes his eyes and imagines he’s jerking off.” -Seth McFarlane

41. “Did you know Donald Trump’s birthname is Fuckface von Clownstick? I hope that’s all over Twitter.” -Jon Stewart

43. “Miss USA, for example, is owned by Donald Trump—a clown made of mummified foreskin and cotton candy.” -John Oliver

44. “It is a little ironic that the Miss USA beauty pageant is overseen by one of the ugliest souls on the planet.” -John Oliver

45. “Donald Trump announces this morning that he will run for president. His hair will announce on Friday.” -Albert Brooks

46. “Donald Trump has had several foreign wives. It turns out that there really are jobs Americans won’t do.” -Mitt Romney

48. “Trump says– he says he’s gonna run for president in 2012. But if his plan for America is to fire everyone, he’s about two years too late.” -Seth McFarlane

49. “A new study claims the stress of being president takes three years off your life. So suddenly everyone is thinking of voting for Trump.” -Conan O’Brien

50. “Trump threatening not to show up for next debate if Megyn Kelly is moderating! I bet he’s so mad he has ‘blood coming out of his wherever.” -Bette Midler