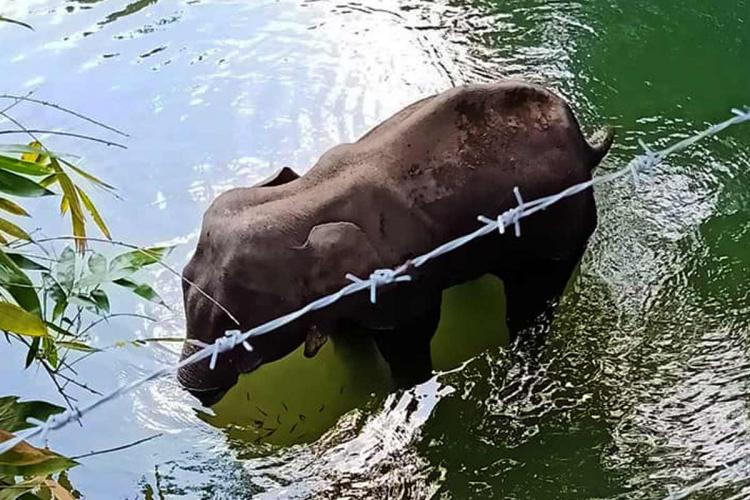 It seems that humans have totally forgotten that they have to live in balance with the other creatures that nature has created.

Off and on we hear cases of their cruelty on animals but this time the killing of a pregnant elephant has led to seething anger amongst many Twitter users.

That the elephant was pregnant had no impact on the cruelty of humans who fed her a Pineapple filled with crackers.

The pineapple burst inside her stomach causing grievous injury and the majestic animal died standing in a river.

This incident occurred in the Silent Valley in the Palakkad district and has left many at Twitter outraged demanding punishment for those who actually caused her this pain.

People have even shared their anguish through pictures and images which depict what was a sheer act of inhuman behaviour. After the blast, the injuries she received were visible near her mouth and tongue.

It also stopped her from eating anything thus making her weak day by day. Despite this, the graceful animal did not try to harm the humans or cause havoc in the village.

People alleged that the Literacy rate had nothing to do with being human. Some even alleged that the humans have actually betrayed the animal and caused the death of its unborn child as well.

On the other hand, some individuals demanded that the preparators of this crime should be punished by the authorities so something like this is not repeated again.

Actor Randeep Hooda who is also the UN Environment program ambassador called it a truly inhuman act and demanded that justice be done.

An act most #inhumane to will fully feed a pineapple full of fire crackers to friendly wild pregnant #Elephant is just unacceptable..strict action should be taken against the culprits sir ????????@vijayanpinarayi @CMOKerala @PrakashJavdekar @moefcc @ntca_india https://t.co/ittFQogkQV

Forest officer Ashique Ali has confirmed that the elephant may have consumed the pineapple at least 20 days back either in April End or May beginning.

This is on the basis of the analysis of starvation that she had to suffer due to her injuries and lack of food consumption.

Unfortunately, the authorities too came to know of the trauma of the animal two days before she passed away.

On May 25th they brought two other elephants i.e. Surendran and Neelakanthan to help her come out of the river.

She was in too much pain by that time and refused to budge. Her mouth and trunk were in the water maybe because she wanted some relief to the pain.

All the efforts to get her out proved futile and she passed away at 4 pm on 27th May.

Police have lodged a case against unidentified persons and are trying to identify the actual people behind it.

So far no arrests have been made but we are hopeful that these people would be identified and arrested.

Humanity may have reached a new low but the animal’s behaviour leads us to hang our heads in shame.

Maybe we need to learn how-to live-in balance with them and then only Nature would forgive us for the misery we cause to it.

Appalled to hear about what happened in Kerala. Let’s treat our animals with love and bring an end to these cowardly acts. pic.twitter.com/3oIVZASpag

How??????
How can something like this happen???
Do people not have hearts???
My heart has shattered and broken…
The perpetrators need to be punished in the STRICTEST way. @PetaIndia @CMOKerala pic.twitter.com/697VQXYvmb

I condemn the Killing of innocent Elephants at Malappuram after being fed with cracker stuffed – pineapple. Nothing can be more insensitive & criminal than this.
The perpetrators of this crime should be severely punished with the same act. #ElephantDeath