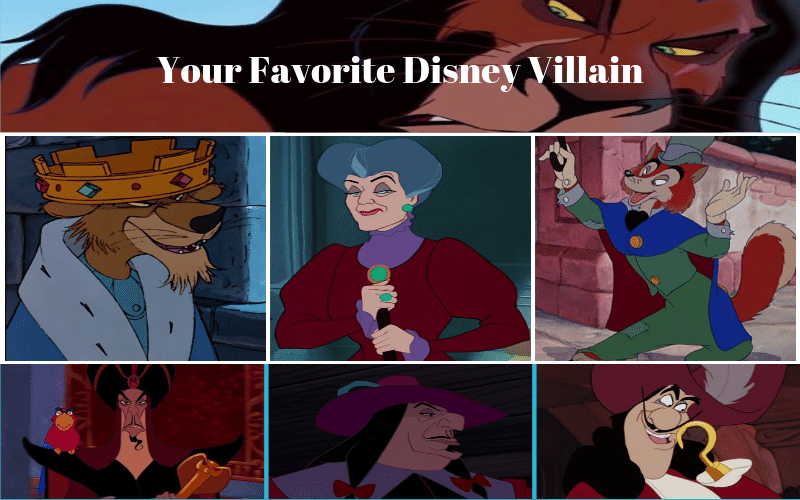 Similar to the Disney Princesses, the Disney Villains have their own franchise. Disney princesses would be nothing without the villains who torture them and even attempt to kill them.

Over its more than 90 year history, Disney has brought to life more than 125 different villains from films, sequels, television, video games, books and even the Disney theme parks.

This list has 20 Disney Villains. Pick your favorite one. 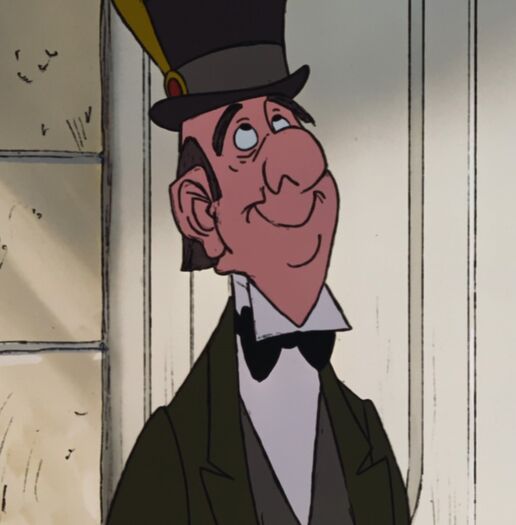 Edgar Balthazar is the main antagonist in Disney’s 1970 animated feature film The Aristocats. He was the loyal butler to rich millionairess Madame Bonfamille, until he found out that she was going to leave her entire fortune to Duchess and her kittens instead of him, making him greedy and determined not to let anyone stand in his way of getting the fortune himself. 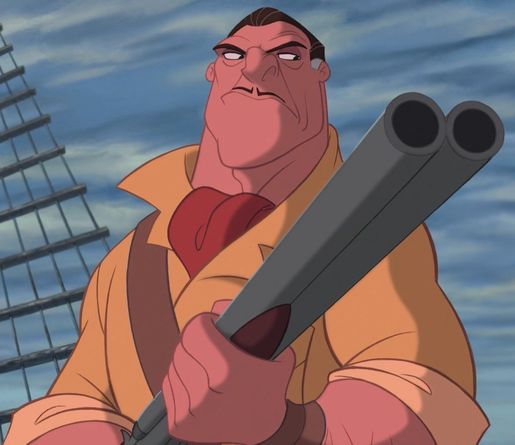 Clayton is the main antagonist of Disney’s 1999 animated film, Tarzan. A veteran hunter and guide, he served as a guide for Jane and her father Archimedes Q. Porter on an expedition to Africa in search for gorillas, but his secret agenda was to use the trip as a means to hunt gorillas in order to sell them on the black market. 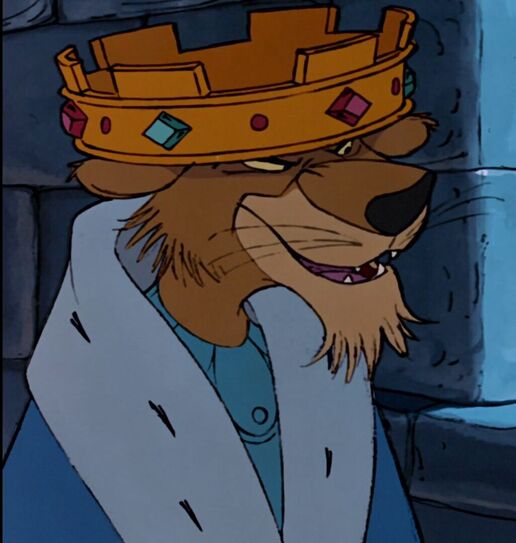 Prince John is a lion, the younger brother of King Richard, and the main antagonist of Disney’s 1973 animated feature film Robin Hood.

After his brother King Richard is brainwashed, thanks to Sir Hiss, into going on a crusade, assumes the crown and becomes somewhat of a dictator, leaving his subjects in poverty. He is based on the real-life King John of England. Peter Ustinov also did Prince John’s German-language voice and played the similar character of Emperor Nero in the Christian epic Quo Vadis. 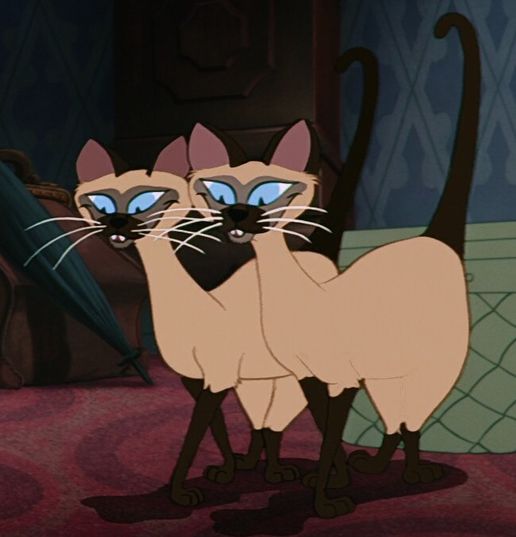 Earlier versions of the storyline, drafted in 1943 during the war, had the two cats appear as a sinister pair, suggesting the yellow peril. Originally named Nip and Tuck, they came to the house with Aunt Sarah while Jim Dear and Darling were still at home and made Lady look bad by committing a series of crimes such as stealing the baby’s milk and robbing the icebox, then pinning them on her.

In the novelization of the film by Ward Greene, written during its production, they tearfully expressed remorse over causing Tramp’s impending execution by hiding the rat’s body as a joke, and then tried to make amends. 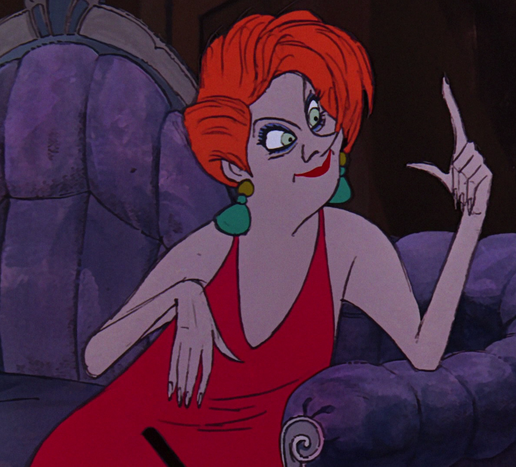 Madame Medusa is the main antagonist of Disney’s 1977 animated feature film, The Rescuers. She is the proprietor of a seedy pawn shop in New York City. 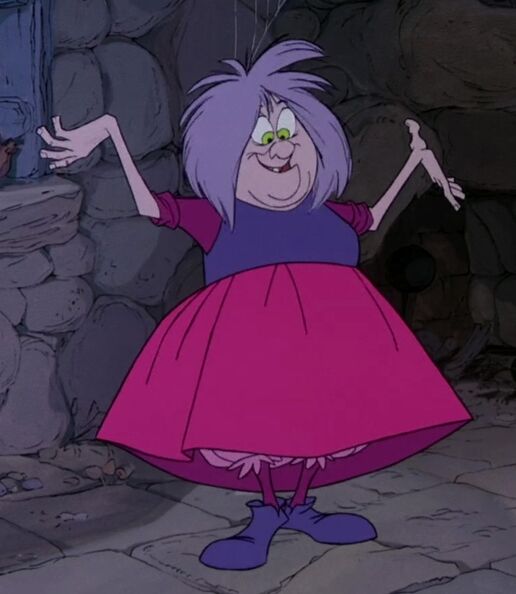 Madam Mim (also known as Mad Madam Mim) is the main antagonist in Disney’s 1963 animated feature film, The Sword in the Stone.

Mim’s past is mostly unknown. At some unknown point, she managed to harness her magical powers, which she likely used for negative means, and has become quite convinced of her power. She chose to use this magic for evil purposes. It is also implied that she already knew Merlin, and they were not on friendly terms. 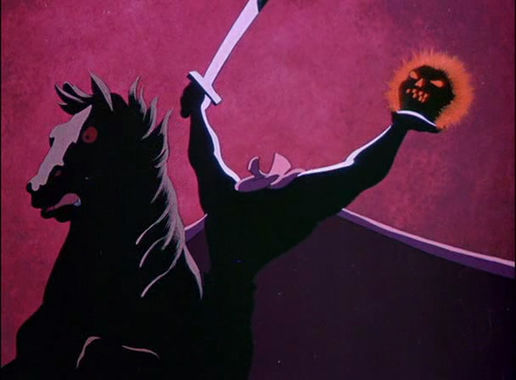 The Headless Horseman is the main antagonist of The Legend of Sleepy Hollow, the second half of Disney’s 1949 animated feature film The Adventures of Ichabod and Mr Toad. 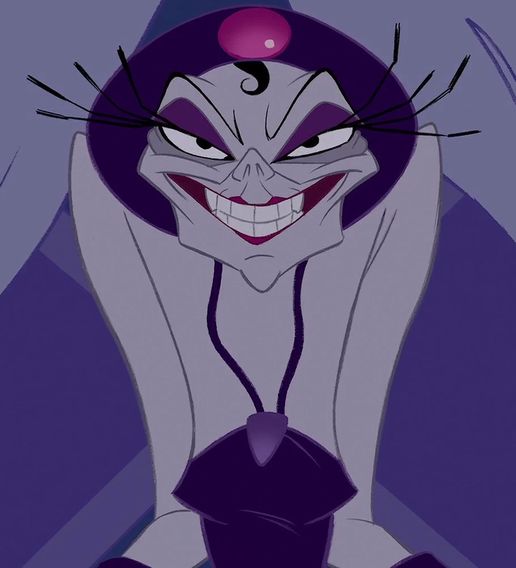 Yzma is the main antagonist of Disney’s 2000 animated feature film, The Emperor’s New Groove. She is an evil scientist and the former advisor to Emperor Kuzco. After being fired from her longstanding position, Yzma becomes obsessed with killing the emperor, and makes numerous attempts to do so with the aid of her dim-witted assistant, Kronk, and a collection of madcap potions. 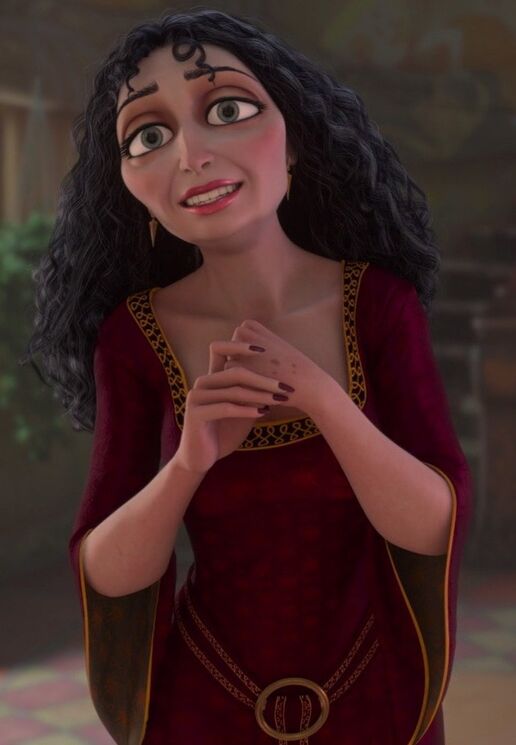 Mother Gothel is the main antagonist of Disney’s 2010 animated feature film, Tangled. She is a controlling witch who kidnaps and raises Rapunzel as her own in a secluded tower. Obsessed with her youth and beauty, Gothel hoards the magic of the princess’ 70 feet of golden hair, so that she may remain young and beautiful forever. 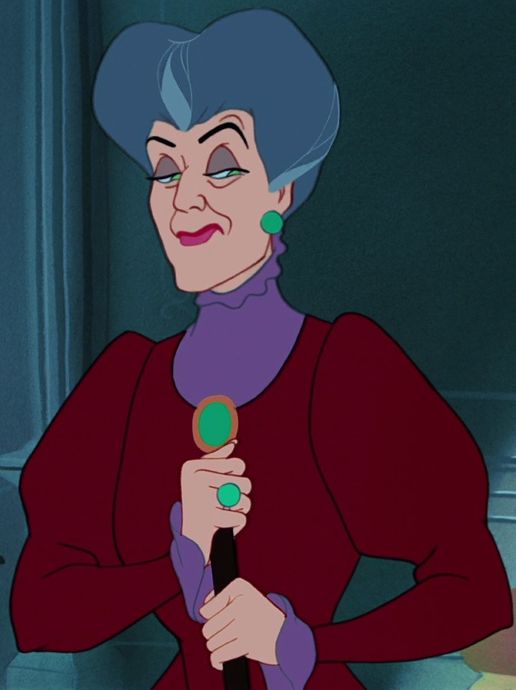 Lady Tremaine (also known as the “Wicked Stepmother”) is the main antagonist of Disney’s 1950 animated feature film, Cinderella. As the cold-hearted stepmother of the title character, Lady Tremaine doesn’t harm her stepdaughter physically.

Rather, she seeks to punish and abuse her psychologically, motivated by her jealousy of Cinderella being far more beautiful and graceful than her own awkward daughters, Anastasia and Drizella. Lady Tremaine is also a socialite, determined to gain higher status by marrying one of her daughters to Prince Charming or another bachelor of noble blood. 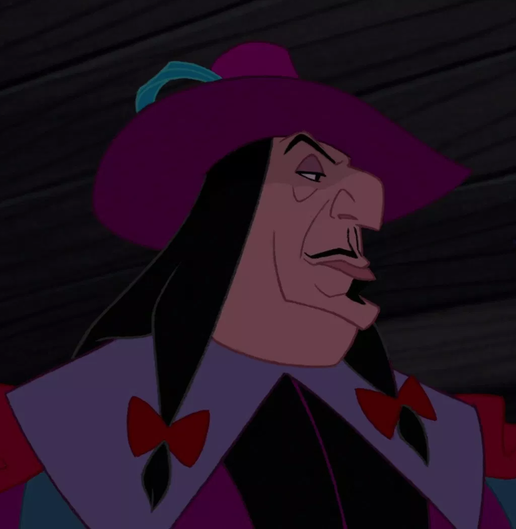 Governor Ratcliffe is the main antagonist of Disney’s 1995 animated feature film, Pocahontas and its 1998 sequel. 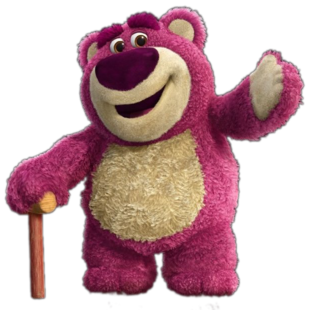 Lots-o’-Huggin’ Bear (“Lotso” for short) is the main antagonist of Toy Story 3. He is a large, pink strawberry-scented teddy bear who used to rule Sunnyside Daycare like a prison with his former minions. 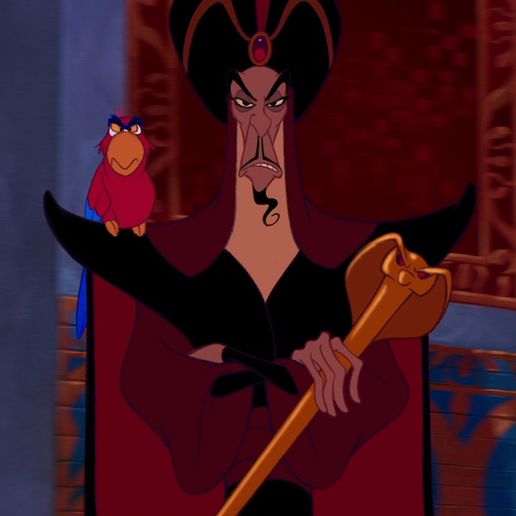 Jafar is the main antagonist of Disney’s 1992 animated feature film Aladdin. As Royal Vizier of Agrabah, he was presented as the Sultan’s most trusted and loyal advisor. In truth, the imperious Jafar held passionate disdain for the Sultan and dedicated the latter half of his life to gaining ownership of a magic lamp containing an all-powerful genie—to that end, Jafar would control cosmic power, which he would use to overtake the throne and the world at large.

Jafar is loosely based off the wicked sorcerer and vizier from the Aladdin folk tale in the One Thousand and One Nights collection of stories. 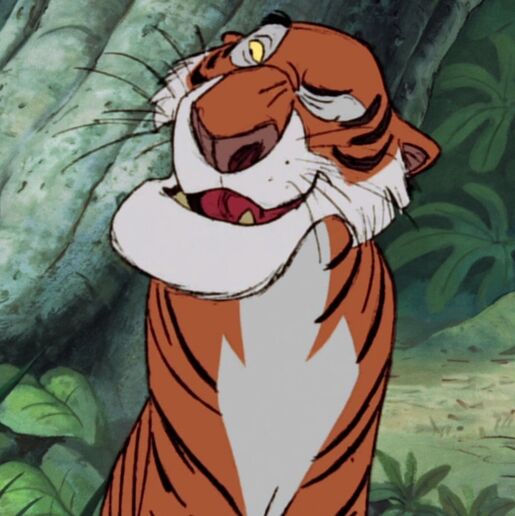 Shere Khan is the main antagonist of Disney’s 1967 animated feature film The Jungle Book, and its 2003 sequel, The Jungle Book 2. A powerful, suave Bengal tiger, Shere Khan had nothing but disdain for his victims. His reputation was such that he needed only to show himself to intimidate the inhabitants of the jungle. His only fears are guns and fire. 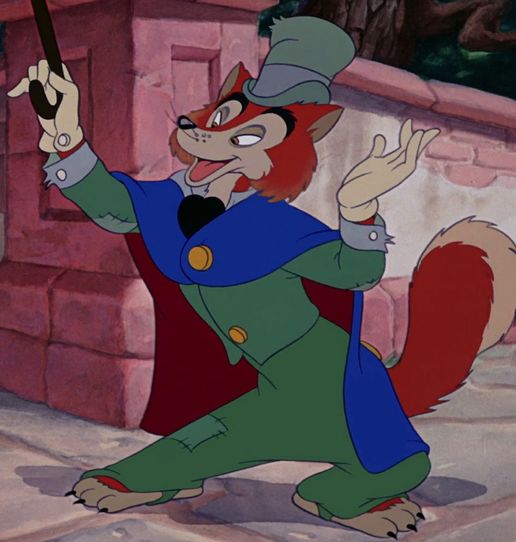 J. Worthington Foulfellow (also known as Honest John) is one of the first two antagonists in Disney’s 1940 animated feature film, Pinocchio. He is a shifty, con-artist anthropomorphic fox who regularly swindles the residents of a small village with the aid of his bumbling sidekick, Gideon. Though a seasoned crook, Honest John is soft-spoken and charismatic. His schemes are typically smaller scale, but he is no stranger to darker tasks. 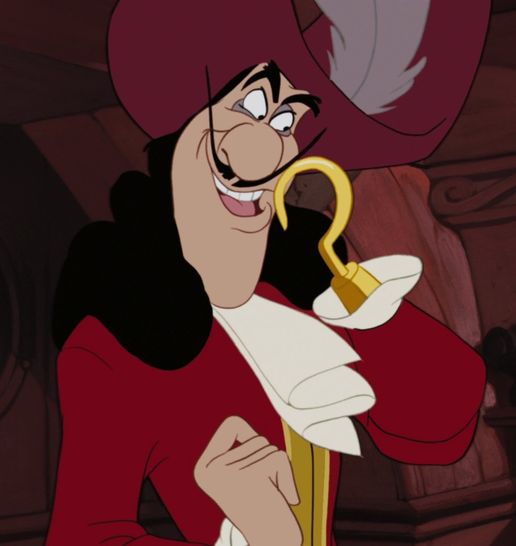 Captain Hook is the main antagonist of Disney’s 1953 animated feature film, Peter Pan. He is the villainous and bloodthirsty commander of The Jolly Roger. Hook has long since abandoned sailing the high seas in favor of having revenge on Peter Pan for cutting off his left hand and feeding it to a crocodile, who has since been in constant pursuit of the captain. While a worthy opponent for Peter, Hook is destined to fail, sometimes because of Peter Pan’s ability to fly, but more often through the bumbling actions of his first mate, Mr. Smee, who while unquestioningly faithful to the captain, is incompetent and flimsy. 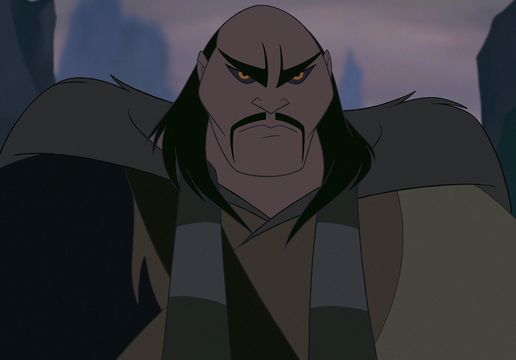 Shan Yu is the main antagonist of Disney’s 1998 animated feature film, Mulan. He is the evil leader of the Hun Army, responsible for mass genocide and panic across China. When the emperor commissions the Great Wall to deter invaders, Shan Yu views this as a challenge and declares war on his majesty, with the intent of taking over the country. 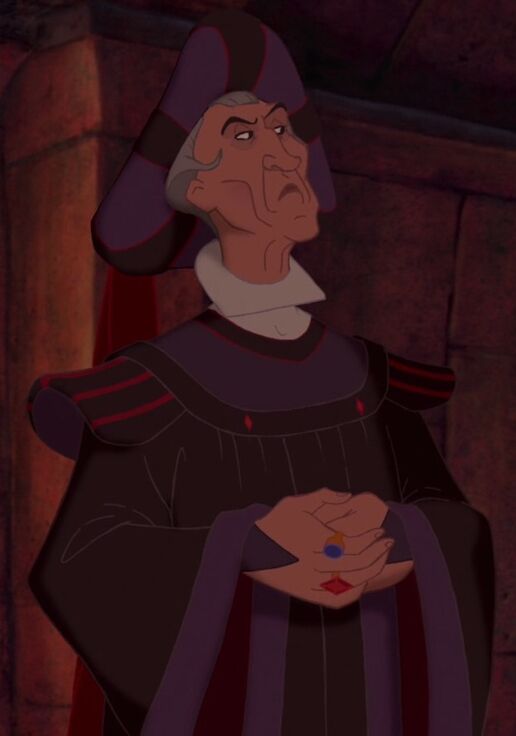 Judge Claude Frollo is the main antagonist of Disney’s 1996 animated feature film, The Hunchback of Notre Dame. He is a ruthless Parisian justice minister who, after a series of sensitive circumstances, becomes the begrudged caretaker of the deformed Quasimodo.

In addition to his political power, Frollo is a religious zealot with intolerance to sinners. He believes Romani people (or “gypsies”, as he refers to them) to be the most heinous of all malefactors, and therefore dedicates twenty years of his life to eradicating them. 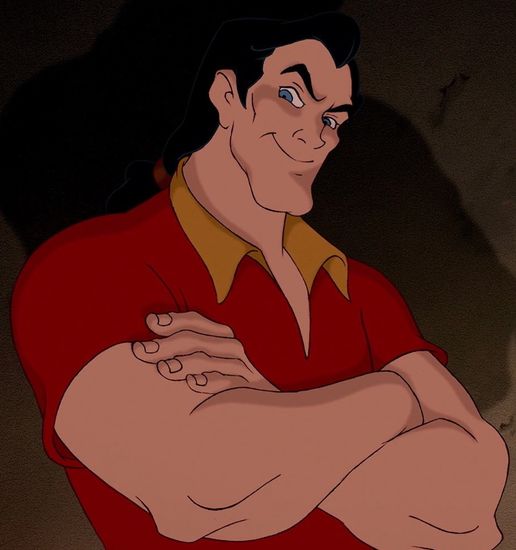 Gaston is the main antagonist of Disney’s 1991 animated feature film, Beauty and the Beast. He was an arrogant and chauvinistic hunter who was greedily determined to have Belle’s hand in marriage, even by force if necessary. His obsession turned him into a ruthless and traitorous villain, especially upon his discovery that Belle’s love was not for him, but for a Beast. 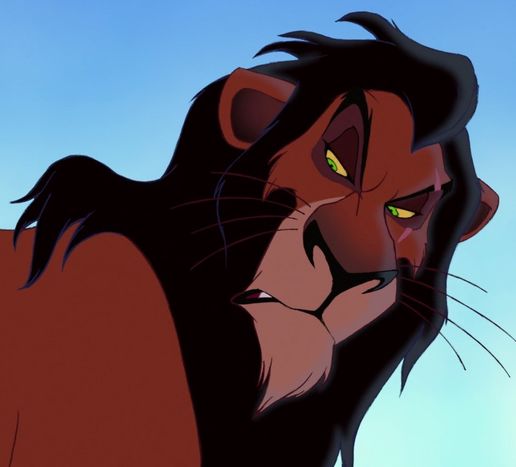 Scar is the main antagonist of Disney’s 1994 animated feature film The Lion King. As the younger brother of Mufasa and second-born prince of the Pride Lands, Scar was next in line to assume the throne as king. His chances were lost, however, at the arrival of his nephew, Simba. This embittered Scar with jealously and a sense of entitlement, prompting him to develop a regicidal plot to take over the kingdom, with the aid of his hyena henchmen.

As one of Disney’s most infamous villains—made especially notorious for his success in murdering Mufasa—Scar is a primary member of the Disney Villains franchise.