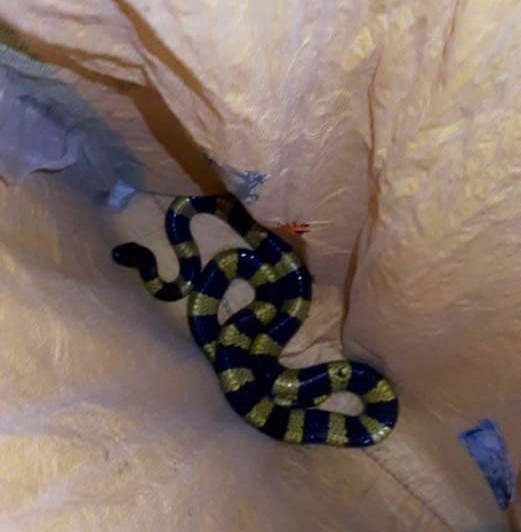 A forest guard from Bihar is being celebrated as a hero after rescuing an extremely poisonous snake from an area located in the Terai region of Kishanganj district and spreading awareness to the locals about peaceful coexistence with wildlife.

The forest guard Anil Kumar saved the krait with a banded tail from Pharingola village. He thanked the residents for calling officials in the first place and not killing the animal. The forest guard also gave a speech about how humans need to share space with other species and not be afraid of them. His speech, which was impromptu, was recorded on camera and is currently being shared via social media.

The video was shared through Dipak Kumar Singh who is the chief secretary of Bihar’s Department of Environment Forest and Climate Change. The video features Mr Kumar being surrounded by villager at night , with another individual carrying a bag that holds the snake.

“Please remain quiet,” said the forest guard to the enthralled crowd. “Please listen to me,” continued Mr. Kumar in Hindi.

“Those who alerted authorities from the department for forest the snake did fantastic job. The snake (the snake) is also a living thing and therefore we shouldn’t be afraid of them. All we need is to be cautious. Snakes also belong to the nature. Without them, the planet would be in a state of degeneration. God has created a distinct function for every living thing. Many people kill snakes. However, I’m glad you’ve asked us to help. The snake is set to be released to its natural habitat. My plea to you all is that you do not kill snakes. Inform us at all times,” he added.

This is what a krait with a banded design is like.

A lot of people have praised the forest department for saving the snake, and Mr. Kumar’s speech. “He speaks with a calm and confident. It also shows that he was accepted by the villager as a member of their community,” said a Twitter user.

Another person praised Forest Department for its efforts in saving the snake.

A user complained that the residents in his village killed snakes, the village’s chief Secretary asked him to notify the forest authorities in the village or call him directly.

Another user suggested that the top officer be in touch with the forest guard. The officer replied that he would.