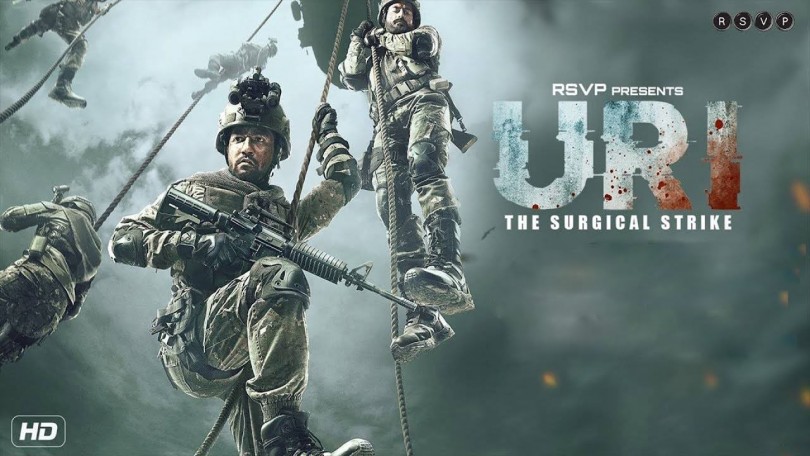 Major Vihaan Singh Shergill of the Indian Army leads a covert operation against a group of militants who attacked a base in Uri, Kashmir, in 2016 and killed many soldiers.

Divided over five chapters, the film chronicles the events of the surgical strike conducted by the Indian military against suspected militants in Pakistan occupied Kashmir.

It tells the story of the 11 tumultuous events over which the operation was carried out. Indian army special forces carry out a covert operation to avenge the killing of fellow army men at their base by a terrorist group.

As far as war dramas go, Uri: The Surgical Strike is a confidently made film that comes out guns blazing.

Based on true events of September 2016, director Aditya Dhar declares that his film is a ‘Tribute to a brave new India’. Nationalism is writ large all over this war drama that leads up to and reimagines the retaliatory surgical strikes conducted by the Indian Army against militant launch pads in ‘Pakistani-administered Kashmir’.

Vicky Kaushal is in top form in the part of Shergill. He not only rocks an army uniform, but also pitches Shergill just right — neither a chest-thumper nor a brooder, but a patriot who is an officer and a gentleman, and also a bit of a ladies man.

While watching Uri, I kept wondering about the point of such a self-congratulatory film.

Vicky Kaushal, playing gung-ho Major Vihaan Shergill, a well-built jawaan with a perpetually puffed chest, who not only decides strategy, outthinks intelligence agents and leads men into battle, but finds time to engage in one-on-one fighting with terrorists of all stripes.

Uri is a decent looking film — though the cinematographer appears to have been told to highlight the lens-flare in every single shot of nighttime combat — and while the action is convincing, the proceedings are unmistakably dull.

Review: The Times Of India

Vicky Kaushal is on a roll. Interestingly, after playing a valiant Pakistani Army officer in Raazi, here he switches sides and plays an invincible Para (Special Forces) Commando, Indian Army. Justifying the hype around him, the actor continues to grow from strength to strength.

His sincere and effortless presence adds depth to this film, that otherwise lacks the palpable tension you expect from a war drama. What makes it then engaging is not its execution, but the audacity of the mission it dramatically decodes and recreates.

Despite knowing the result, you watch the events unfold with childlike intrigue as the complex operation plan was classified. The rigorous process — how 80 Indian Para SF commandos managed to infiltrate PoK and destroy the terror camps, makes for an instructive watch if not gripping.