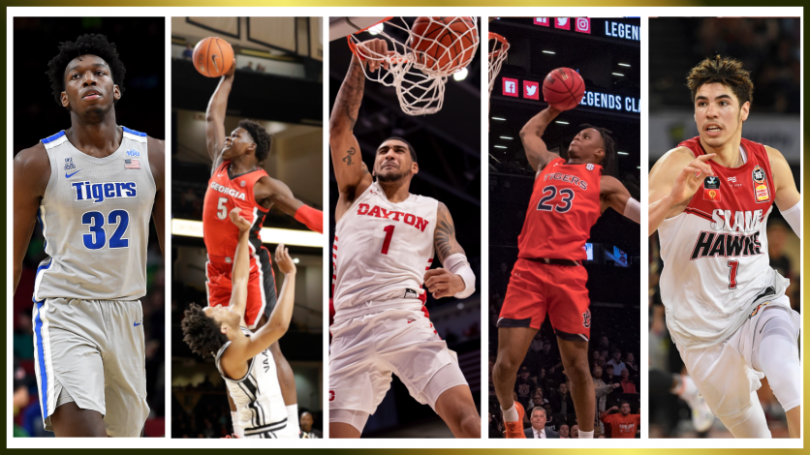 NBA is going to start its season probably in the month of July. With this the speculations about who all have managed to make a place are strong. However, NBA front offices are yet to decide what is to happen to the players.

There has been no urgency to formulate the new names so we can also only speculate and project certain names. Here we share with you the NBA mock draft latest projections that could be translated into future decisions.

At age 18 and height reaching 6.5 feet, Anthony obviously has lots working in favour for him. He has loads to learn and the prospect of playing uptempo and getting shots only made for him is ideal.

He could be a good support to Young’s talent and that is what counts in the end.

If Edwards is ignored then the next best one is James Wiseman. He plays in a crucial position and when the need is dire he can quickly fill in as a replacement.

His physical profile at 7 + height is definitely a positive point and he would be a great choice.

The pistons are already in a tough position. Ball has the size, handle and vision to ensure that the team performs as per expectations. Basically, Pistons would have to take a risk at this point and Lamello would be their best choice.

Another good team in a difficult situation they need someone to bail them out. As a strong player, Okongwu can show a good pairing with P.J. Washington in the pairing.

There has been a lack of organizational record in drafting international records so choosing Okongwu at number four seems to be the logical thing to do.

Cleveland would find it tough to land at this spot. At number two they can choose between Wiseman and Edwards and though Avdija is not the safest pick his skill set is a huge asset.

No matter whoever gets picked here these positions are going to be the toughest ones to decide.

Although the Timberwolves have come down to the 6th spot the combination of Toppin and Minnesota is quite interesting.

The wolves have a good team line up and Toppin joining them would be a great investment at 4th position. People have questioned his mobility while being on defence but if he can continue the game for long the money would be worth it.

Knicks need a point guard at this juncture and Hayes and Tyrese Haliburton any of them could be suitable.

As of now, the requirement is for someone who can take the pressure of Barrett and for that Hayes should be appropriate.

An intelligent player Tyrese Haliburton is considered a valuable talent by the Nuggets front office.

He seems to be strong enough to be able to handle the veteran players with ease. However, despite his talent at having the best holes, Haliburton would really have to play as per his strengths.

The wizards have full intention on aiming at the playoffs spot this year. Vassell is a strong team defender and a capable shooter and this cannot be denied.

Vassell’s ability to space the floor gives him a strong advantage and he could be the upgrade their team needs.

To maintain the team the Suns picked up Ricky Rubio however they still need someone to get more shooting done. Anthony is capable of hitting tough shots and that makes him a winner for the team.

The Suns have already picked up some really young players and finding their next teammate in Anthony is not a chance we can ignore.

Okoro has some very intriguing qualities that define the Spurs choice. Though it is believed that his shooting skills are the Spurs team is known to improve even the toughest of players.

He needs a lot of improving to do but athletically has lots to offer.

The chances are low but Patrick Williams may still be a viable catch after all. He is the youngest prospect and has a great physique that makes him suitable to be at any positions in the game.

Whether or not he is able to defend no one can comment but he may just fit into the different line ups perfectly.

New Orleans already have a talented team so whoever is shortlisted may not have to start doing so this year itself.

Lewis has shown drastic improvement and hence could be a decent investment. He is one of the fastest players and that is what makes him a prized catch. This makes him a great choice for teams who start late.

Achiuwa has had a high performing season at Memphis. His strength and versatility make him one of those players who everyone wants to get on board.

Achiuwa could be worthy of getting a centre position and he could give Portland an athletic option they have not had till now.

Maxey is in an in-between position but he could be a valuable player even though he may not be the scorer that every team needs.

However to get in Maxey needs to be an average shooter at least, and if he can work on defending he could be picked up soon.

He may be portrayed as a solid role player but his abilities with Jump shooting may make him selection material.

Nesmith may not be great at auxiliary skills but still can prove to be a dangerous ball threat. He may not be a flashy pick but for some team, he could be a prized catch.

There are still some doubts about his inclusion in the league. However, he is big, fast and offers some secondary playing potential at the board.

Though his shooting struggles may still force people to think about him twice a team with multiple firsts can choose him.

He had a bad last season but things have changed since then. He may lack elite skill but can make up for it but so far he has not got the chance to show his true potential.

Mavericks are in a great financial position so by investing in him they could be thinking long term.

Bey has made some good winning games and he could be on the path to becoming a rotational player for any team.

His age is a drawback at 21 and he may not be able to move up however he has the size to play forward spots with ease. You could see him as a small-ball forward teammate and his defence is pretty strong too.

Nets already have gone overboard with team selections. If they don’t want an instant player at the moment Jaden could prove useful.

He will, however, have to pick a role where his strength is played to and fit in a secondary scoring role.

Isaiah has been pretty responsive at the field and this combined with his off-court intangibles makes him a worth considering player.

Many teams view him as being the back up they require and they trust his athletic profile would work for their team as well.

He is also a better passer then most others and if he is able to surpass strong names like Plumlee he could be picked up.

Terry is very consistent with his shooting and therefore can fit in the long term. Though it is believed that he needs some time to build upon his skills the sixers may not want their first-rounder to play immediately and that could give him the boost required.

Terry’s ability to play on and offline corresponds with the type of guards sixers has always picked up.

At age 19 Green has a strong athletic build which may be given a priority. His freshman year was not as per the mark but he surely could make up for that with his strong profile and shooting potential.

Though he is considered to be quite passive he could play to his strengths and become an asset for the team.

Over the last season, Nico became quite an undervalued player. However, his decision-making skills and strong intangibles cannot be denied.

He has some similarities with other popular guards like Jalen Brunson and if a team like Utah needs to replace, Mannion may get his chance.

Ramsey had an underwhelming year at his college and his lack of defensive impact and struggles to put pressure on the rim caused a lot of concern.

If his last season could be ignored then Ramsey has a very strong chance of being picked up. In high school, he showed much promise and if could get back to the same he is a viable option.

Boston picked up three rookies last year. However, they might not be able to use all of them in this year’s session. But that means they could easily pick up one who may not need to contribute this year at all.

Aleksej’s athletic profile and skill sets make him worthy of being chosen and despite being a riskier pick could be chosen.

Nnaji has a very wide range and his shooting potential is commendable too. He is picking up and trying to build a strong profile for himself.

With having a strong showing at Arizona he might defeat other players like Jalen Smith and be considered as a strong teammate.

Teams love his creativity but some have raised concerns over his shooting abilities. However, it is tough to find his combination of size and natural playmaking skills.

Toronto though is a good team already and if they wish to go want the first-grade pick they could give him a chance.

His gaming style got him a lot of appreciation yet he was ignored in the Top 40 list last year.

The positive decisions he takes along with the toughness he brings to the game are all reasons why he is a strong candidate. Lakers might want someone with depth and in that regards Malachi fits the bill completely.

All teams are gushing about Smith and his potential to shoot from far brings him in the top league.

Boston continues to play centre by the community and they could easily add up someone like Jalen in their team.

Smith’s stiff movements may be a deterrent however he could still manage to remain between this and above five positions.