Home » News » Must Watch: Huge Snake Being Lifted Out Of Its Rainforest Home 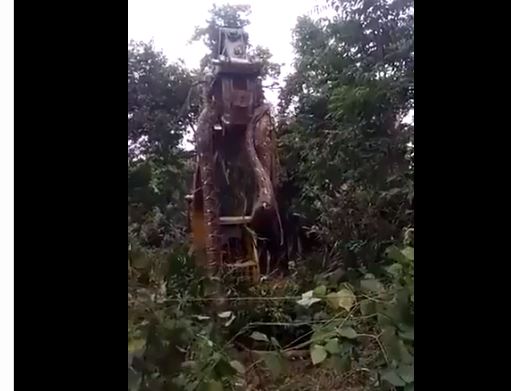 A video that went viral on the internet shows a massive snake being removed from its forest home by the aid of a digger. It has been making the rounds on the Internet for more than two weeks and has left people stunned at the sheer size of the snake.

A number of news reports, in fact, suggested that it might be the world’s largest snake ever recorded. Since the video was posted on social media, a number of news sites reported incorrectly that the snake was found in Jharkhand.

However, as per The Mirror, the snake was spotted by workers who were clearing the Dominica rainforest. The video was posted on TikTok by @fakrulazwa . The video has been watched more than 7 million times via the site. Another video posted on the same account, shows people struggling to put the snake inside their car.

The local government in Dhanbad, Jharkhand confirmed that no snake was ever found anywhere in the district. Neither did they have any evidence where a snake had been lifted using the help of a JCB machine.