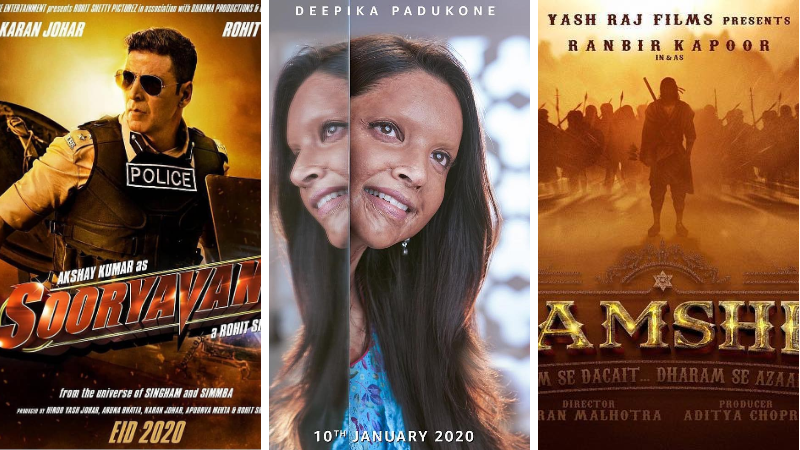 You will get an idea of what all upcoming Bollywood movies are lined up for release this year. This will help you to plan your movie outings for the year 2020.

Depending on the censor certification, the list is bound to change. Some upcoming Bollywood movies which have already released in 2020 and some other which will be releasing in weeks ahead are also given here.

Below are some of the upcoming Bollywood movies 2020 and this will be continuously updated as per the planned releases throughout the year.

Chhapaak is an upcoming Indian Hindi-language drama film directed by Meghna Gulzar and produced by her as well as Deepika Padukone in collaboration with Fox Star Studios. Based on the life of Laxmi Agarwal, it stars Padukone as an acid attack survivor, alongside Vikrant Massey. A young woman tries to rebuild her life after a man throws acid in her face on a public street in New Delhi in 2005.

Tanhaji: The Unsung Warrior is an upcoming Indian Hindi-language biographical period action film starring Ajay Devgn, Saif Ali Khan, Kajol, Jagapathi Babu and Sharad Kelkar in the lead roles. This film is very special to Ajay Devgn because it marks his 100th film in the Hindi film industry. Tanhaji Malusare was an unsung Maratha warrior from the 17th century Maratha Empire, whose acts of valor and bravery continued to inspire soldiers long after his death in battle.

He was endowed with a body of steel, courage of a lion with an agile mind and Chattrapati Shivaji’s closest aide and trusted lieutenant. Ready to lay down his life for his King and country, this Braveheart went to war, armed with a few Maratha soldiers to get back the Kondana Fort, against the Mughal army headed by Udaybhan. Mughal’s had the muscle power, but Tanhaji had sharp acumen.

Unfortunately, Marathas won Kondhana Fort, but lost their Lion. Tanhaji left behind a void that none in history could ever fill. ‘Tanhaji: The Unsung Warrior’ is a visual extravaganza that depicts the life and times of this unsung warrior, whose valor still makes the Nation proud.

Jawaani Jaaneman is an upcoming Indian Hindi-language drama film directed by Nitin Kakkar. It stars Saif Ali Khan as a 40 year-old father and debutant Alaia F as his daughter, with Tabu portraying an important pivotal character.

Principal photography of the film took place from 14 June to 24 August 2019. Saif Ali Khan is all set to reunite with co-star Tabu after a long time in his upcoming film, ‘Jawaani Jaaneman’.It stars Saif Ali Khan as a 40 year-old father and debutant Alaia F as his daughter, with Tabu portraying an important pivotal character.

Imtiaz Ali’s upcoming 2020 Indian Hindi-language romantic drama film stars Kartik Aaryan and Sara Ali Khan. Principal photography began in the first half of March 2019 and ended in July 2019. It is scheduled for release on Valentine’s Day.This romantic comedy will see Sara Ali Khan and Kartik Aaryan pairing up for the first time as they work in the sequel to Imitiaz Ali’s 2009 release, Love Aaj Kal.

5. The True Story of Gunjan Saxena – The Kargil Girl

Kapoor plays the role of Indian Air Force officer Gunjan Saxena who has the honour of being the first Indian woman combat aviator to be commissioned into the war zone during the Kargil War, reports New Delhi Television.

Angrezi Medium is a 2020 upcoming Indian Hindi film directed by Homi Adajania and produced under the production banner Maddock Films. The film is the spin-off to the 2017 comedy Hindi Medium and stars Irrfan Khan, Kareena Kapoor and Radhika Madan in lead roles.

Street Dancer 3D is yet another dance film directed by Remo D’Souza. The film brings back ABCD 2 actors Varun Dhawan, Shraddha Kapoor and Prabhudheva in the lead roles while Nora Fatehi is the latest addition to the cast.

Panga is inspired from the life of a national level Kabbadi player from India. It follows her triumphs, struggle and overcoming of stereotypes and reflecting upon the importance of love and family support in order to become successful. The film features Kangana Ranaut, Jassi Gill, Richa Chadda, Neena Gupta and Yogya Bhasin. The story depicts the jovial life of a kabaddi player.

The ‘Dhadak’ actor will be seen playing two characters who are “poles apart”, Roohi and Afsana. Actor Janhvi Kapoor has been roped in to feature in Rajkummar Rao and Varun Sharma’s horror-comedy, Rooh-Afza. The film will be directed by Hardik Mehta and co-produced by Dinesh Vijan and Mrighdeep Sing Lamba.

Ranveer Singh and Deepika Padukone will be seen together onscreen depicting India’s historic win of the 1983 Cricket World Cup. Singh will portray the role of cricketer Kapil Dev.

The action-packed adventures of an anti-terror Squad in India. Sooryavanshi is an upcoming Indian Hindi-language action film directed by Rohit Shetty and produced by him and Karan Johar under their banners Rohit Shetty Picturez and Dharma Productions respectively, in association with Reliance Entertainment and Cape Of Good Films.

“In the story, which borrows its title from their names, Sitabo is the worn-out, overworked wife of a man, while Gulabo is his enticing mistress. It is peppered with local humour and songs that depict the nuances of daily life,” the director has said.

Coolie No. 1 is an upcoming 2020 Indian Hindi-language comedy film directed by David Dhawan and produced by Vashu Bhagnani. A remake of the 1995 film .Coolie No 1 is a Hindi movie starring Varun Dhawan and Sara Ali Khan in prominent roles.

Ananya Panday, who will be seen next in Khaali Peeli opposite Ishaan Khatter, says that the film is a roller-coaster ride she was waiting to do for a long time. Directed by Maqbool Khan, the Mumbai-set movie promises a young, edgy roller-coaster ride that kick-starts one night when a boy meets a girl.

Sadak 2 is a special film for the Bhatt family for multiple reasons. While with the film Mahesh Bhatt is making his directorial comeback after 20 years, it is also the first time that the father-daughter duo will work together in a film project.

The film is the sequel to Mahesh Bhatt’s 1991 film of the same name. It starred Pooja Bhatt and Sanjay Dutt in the lead. Interestingly, Sanjay Dutt will also be seen playing a pivotal role in the sequel.

The new film has Aditya Roy Kapur, Gulshan Grover and Makarand Deshpande playing important characters. The film is about Ravi’s depression and how he helps a young woman’s encounter with a godman, who is out to expose this fake guru running an ashram.

Shamshera is an upcoming 2020 Indian action-adventure film starring Ranbir Kapoor, Sanjay Dutt, and Vaani Kapoor. It is produced by Aditya Chopra’s Yash Raj Films. The movie is written and being directed by Karan Malhotra. Set in the 1800s pre-Independence India, the film is an Indian adaptation of Howard Pyle’s “Merry Adventures of Robin Hood”.

The film titled Lal Singh Chaddha is a remake of the 1994 film Forrest Gump, which featured Tom Hanks in the lead role. The film will be directed by Secret Superstar director Advait Chandan and it will be written by Atul Kulkarni. Lal Singh Chaddha will collaboratively be produced by Aamir Khan Productions and Viacom 18 Motion Pictures. The 1994 comedy-drama Forrest Gump is based on the 1986 novel of the same name.

Dostana 2 is directed by Collin D’Cunha and is penned by Navjot Gulati, Sumit Aroraa, Rishabh Sharma.The upcoming film is a sequel to 2009-released Dostana, which starred Priyanka Chopra, John Abraham, and Abhishek Bachchan in the leads.

Brahmastra stylised as Brahmastra is an upcoming 2020 Indian Hindi-language superhero film written and directed by Ayan Mukerji, and produced by Karan Johar.Set in contemporary India yet steeped in mythology, Brahmastra transports us to a spectacular new world beyond our imagination.

This is the story of Shiva, a reluctant hero who embarks on an unexpected journey of self-discovery and love, which leads him to rise against the dark forces that threaten our very existence.According to reports, the Ranbir Kapoor, Alia Bhatt and Amitabh Bachchan starrer upcoming film ‘Brahmastra’ will be made on a budget of ?100 crore.

Bhool Bhulaiyaa 2 is an upcoming Indian Hindi-language comedy horror film directed by Anees Bazmee and produced by Bhushan Kumar. Featuring Kartik Aaryan and Kiara Advani in lead roles, it is a standalone sequel of the 2007 film Bhool Bhulaiyaa directed by Priyadarshan.

Takht is produced by Hiroo Yash Johar & Apoorva Mehta under the banner Dharma Productions. Vicky Kaushal plays Aurangzeb and Ranveer plays Dara, Aurangzeb’s elder brother. It’s the story about the enemity between brothers caused for the succession of the Throne.