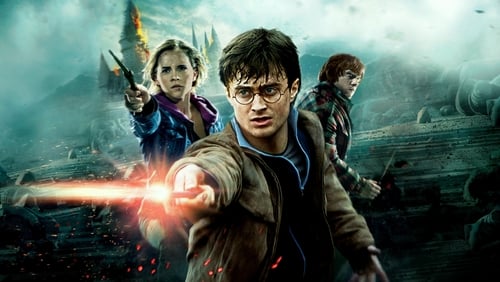 Harry, Ron, and Hermione continue to find the rest of Voldemort’s Horcruxes, until Harry discovers that one is at Hogwarts, they flee there as soon as possible but Voldemort instantly finds out about their mission. The battle is drawn at Hogwarts as many people fight to protect Harry Potter.

Harry then realizes that people are dying constantly for his mistakes and then eventually fights Voldemort for the last time. Along the way, crucial secrets are unraveled, and the mysterious but legendary Deathly Hallows reappear.

Hogwarts is falling, its ancient stones raining from a black sky in a storm of orange pyrotechnics. At the same time, the vast edifice of the Potter empire is crashing down too, the end of a story which has held us spellbound for almost 20 hours of wizard cinema. The final installment, Deathly Hallows Part 2, is a bravura duel between good and evil. It’s also a cathartic, occasionally clunky nostalgia-fest.

Harry, Ron, and Hermione, the innocent faces that once munched chocolate frogs on the first Hogwarts Express, are now scarred with the knowledge of darkness. This eighth movie is bloody, and that’s not just Ron goofily saying “bloody hell” at regular intervals. Much-loved characters die gruesome deaths, and the sinister atmosphere is aided by.

Here, then, are the facts. “Part 2,” due in theaters Friday, closes the final book board on a multibillion-dollar franchise comprising J.K. Rowling’s seven novels and Warner Bros.’s eight films (the last book was split into two, with “Part 1” released in November). Those sobs you’re hearing are emanating not only from bedrooms everywhere but also from the boardroom of a certain studio in Los Angeles.

“Part 2,” in which Harry makes his final stand against the negative-nosed Lord Voldemort (Ralph Fiennes), seems even less concerned than “Part 1” in appealing to nonfans. The film begins with the briefest of recaps, but the basics of the plot, in which Harry searches for the evil trinkets called Horcruxes that fuel Voldemort’s power, must be absorbed through osmosis. There are several unwieldy chunks of exposition that seem almost unnecessary given the target audience.

It’s true it is very different from the book but I think that partly comes from them splitting it up, which I still think was a terrible idea. Nevertheless, I like this movie. I think it ends the series in a very satisfying way. I like that all the minor characters are given their moments to shine.

I like seeing Harry defeat Voldermort by being a better man and human being. There’s something so pure about that rather than him defeating him with valor or a warrior’s spirit. We definitely get some very sad parts, which feel earned but it is also fun. I love when Harry is in the spirit world and gets the chance to talk to Dumbledore and decide what to do with his life.