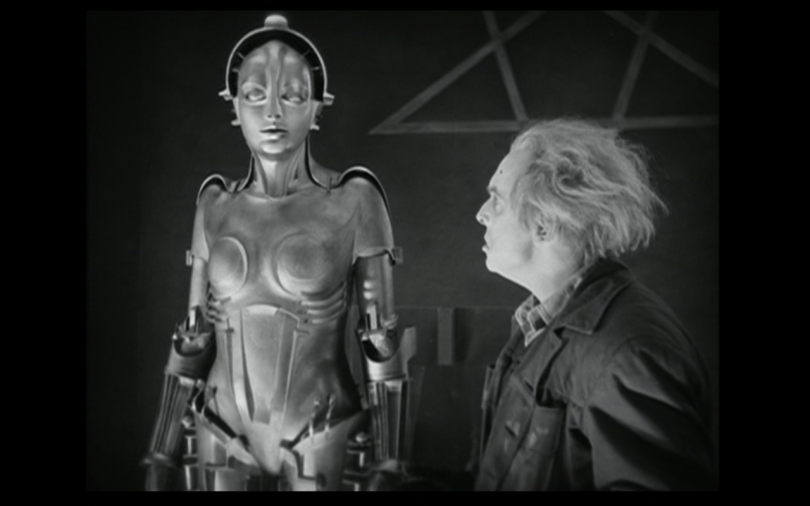 Sometime in the future, the city of Metropolis is home to a Utopian society where its wealthy residents live a carefree life. One of those is Freder Fredersen.

One day, he spots a beautiful woman with a group of children, she and the children quickly disappear.

Trying to follow her, he is horrified to find an underground world of workers who apparently run the machinery that keeps the Utopian world above ground functioning.

One of the few people above ground who knows about the world below is Freder’s father, John Fredersen, who is the founder and master of Metropolis.

Freder learns that the woman is called Maria, who espouses the need to join the “hands” – the workers – to the “head” – those in power above – by a mediator who will act as the “heart”.

Freder wants to help the plight of the workers in their struggle for a better life. But when John learns of what Maria is advocating and that Freder has joined their cause, with the assistance of an old colleague.

The story of a class war of those who are rich are up above, and those who are poor and toiling below is the heart of the movie, and it’s a fair enough story to tell.

Freder, son of rich and powerful Frederson, has had the easy life but soon sees how people are suffering after following the attractive girl down to the slums.

There he sides with them and fights against their treatment despite his father being the head of it all.

It does so, to a certain degree, before its found out, leading to a final fight between Freder and Rotwang on a roof, that ends with the later plunging to his death.

The final scenes are of Freder getting his father and lower-level leader / foreman Grot to shake hands, setting a course for a brighter future.

Plenty of little twists there, but that’s the jist of the 2 hour-ish runtime (baring in mind the original film was two and a half hours, but there still remains footage lost…) and it’s good, when it’s moving forward…

“Metropolis,” a German film made in 1927, was as groundbreaking in its time with its special effects as “Titanic” was in 1998.

Although originally a flop at the box office, through the years “Metropolis” has grown in stature until it is now considered one of the most important and influential movies ever made, as much of a game-changer as “The Godfather” or “The Matrix.”

In fact, it’s now impossible to see the movie with fresh eyes, as its imagery and ideas have been adapted, borrowed or outright stolen for countless films since then.

For instance, there is the layered neon city of “Blade Runner,” C-3PO, “Star Trek’s” transporter beams, Nicole Kidman’s first sequence in “Moulin Rouge!” – on second thought most 1920s nightclub sequences, the creation scenes in “The Fifth Element” and “Young Frankenstein,” and any factories where nameless workers scurry underneath steaming behemoth machines.

Another audience member even said of the lead actress, Brigitte Helm, “She looked just like Kate Bush” – which rather wonderfully missed the point.

Vancouver’s Pacific Cinematheque is showing the new restoration of the film, with 25 minutes of previously lost footage reinstalled.

The story of the missing footage is epic in itself, with two different prints of the film (one discovered in Argentina and the other in New Zealand), both supposedly struck from the same master, showing up within a few years of each other. The version that Fritz Lang showed in Berlin in 1927 ran for 153 minutes. This new version clocks in at 147 minutes.

The reaction at The Berlin Film Festival this past spring was ecstatic, and the film is still something to behold, even if the newly restored footage occasionally looks like someone ran over it with a brillo pad.

The Giorgio Moroder score of the 1980s also has been excised and the original symphonic score from composer Gottfried Huppertz, complete with Wagnerian-style leitmotifs, is given full swagger. This truly is a film that deserves to be seen on the big screen.