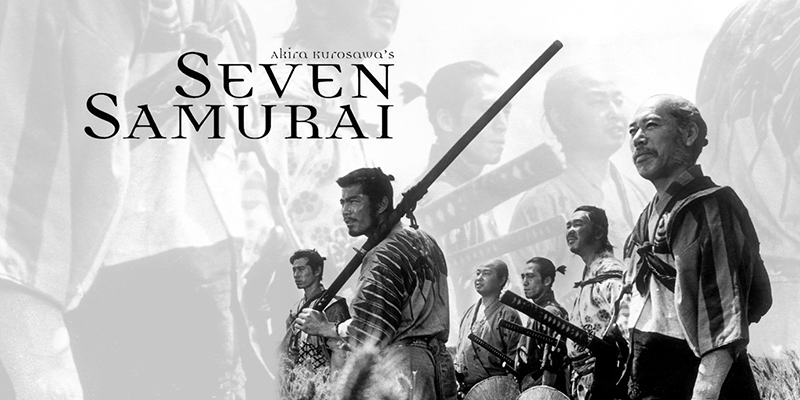 In 16th century Japan, farmers in a small village face the prospect of again losing their crops to a band of roving thieves. Their solution is to go to the nearest city and see if they can hire samurai to protect them.

The farmers are poor and can only offer food and lodging but they soon recruit Kambei Shimada who determines that they will need a total of seven samurai to properly guard the village.

Slowly, he recruits other samurai for their task and once complete, move to the village. There they teach the farmers basic self defense and fortify the village itself. When the bandits attack, they are prepared but suffer many losses.

The greatest movie ever made about warriors and battle is Akira Kurosawa’s “Seven Samurai,” a 3 1/2-hour saga about a group of masterless samurai in the 17th Century who hire on to protect a small village from bandit hordes. The last film in the Music Box’s excellent series of restored Kurosawa classics, this spellbinding masterpiece follows those samurai as they are selected by their wise, endlessly resourceful leader, Kambei (Takashi Shimura), and face danger and death for a pittance–right up to a series of battles that are unprecedented in their realism, sweep and savage fury.

Released in Japan in 1954, and in the U.S. (in a cut version) in 1956, “Seven Samurai,” a near universal favorite among critics and filmmakers, is a film of stunning technique and astonishing impact. Its battle scenes have been compared to Goya’s paintings and the Russian film classics of Eisenstein and Dovzhenko. Its characters–especially Shimura’s Kambei, Mifune’s clownish extrovert Kikuchiyo and Seiji Miyaguchi’s perfect swordsman Kyuzo–have passed into legend.

Often imitated–notably by John Sturges’ highly entertaining 1960 western remake, “The Magnificent Seven”–“Seven Samurai” has never been surpassed or equaled, even by films employing vastly superior technology and resources. This is the movie, above any other, that makes you feel as if you have experienced battle: its exhilaration and terror, its excitement and madness, its churning energy and horrific devastation. (“Saving Private Ryan,” as Steven Spielberg has often admitted, is yet another film directly inspired by “Samurai.”)

Seven Samurai is richly deserving of its high place in cineaste circles. Despite its epic length and scope, the key to the movie’s success is that it focuses on a small group of characters. (The actual number of fully realized individuals is three, not seven – several of the “secondary” samurai are only sketchily developed.) The narrative is straightforward, allowing numerous opportunities for elaborate action sequences.

In fact, the bulk of the movie’s second half is comprised of battle scenes. These are clearly delineated and exactingly choreographed. Kurosawa, a meticulous craftsman, does not rely on editing sleight-of-hand to present fights. His stylistic imprint is emblazoned upon every frame. (Seven Samurai was filmed with a 1.33:1 aspect ratio. For a sample of what Kurosawa accomplish in widescreen, check out some of his later films, starting with Hidden Fortress.)

For the most part, however, the basics were left intact. After viewing American remake, Kurosawa reportedly remarked that he was pleased with the effort, going so far as to send a gift to filmmaker John Sturges, who helmed the 1960 feature.