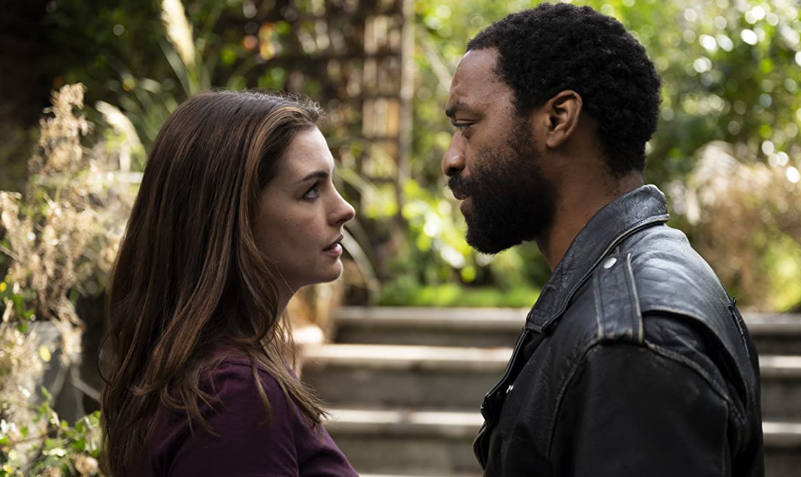 In Locked Down, just as they decide to separate, Linda (Anne Hathaway) and Paxton (Chiwetel Ejiofor) find life has other plans when they are stuck at home in a mandatory lockdown. Co-habitation is proving to be a challenge, but fueled by poetry and copious amounts of wine, it will bring them closer together in the most surprising way.

Two people who used to be in love but now can’t stand each other are forced to cohabitate because there’s nowhere for them to go. Welcome to the era of COVID romance, and to the first movie to mine it as a subject: in the romantic comedy and heist-movie hybrid Locked Down, Chiwetel Ejiofor and Anne Hathaway play Paxton and Linda, a couple living in London in the early days of that city’s first lockdown, circa March 2020.

“Locked Down,” the latest and least heightened entry in the emerging (and hopefully short-lived) sub-genre of films shot during COVID-19, opens with a sight that won’t make sense until a bit later: The fattest possible hedgehog bumbling through a London garden like it’s been lapping up cheap wine all day. A few minutes later, Doug Liman’s mostly fun rallying cry for the rush of living counters that odd start with a sight that immediately makes all the sense in the world.

What kind of movies will the pandemic inspire? How will the drama of Covid-19 be told? A harbinger has arrived, but it doesn’t amount to much. In normal times “Locked Down,” streaming on HBO Max, wouldn’t amount to anything, except for one monologue that fills three minutes and has nothing to do with viruses. Still, the film, directed by Doug Liman, was shot—in a mere 18 days—during the plague, which does in fact figure in the plot, and it’s the first one I’ve seen in which a number of people, none of them playing gangsters or the Lone Ranger, are wearing masks.