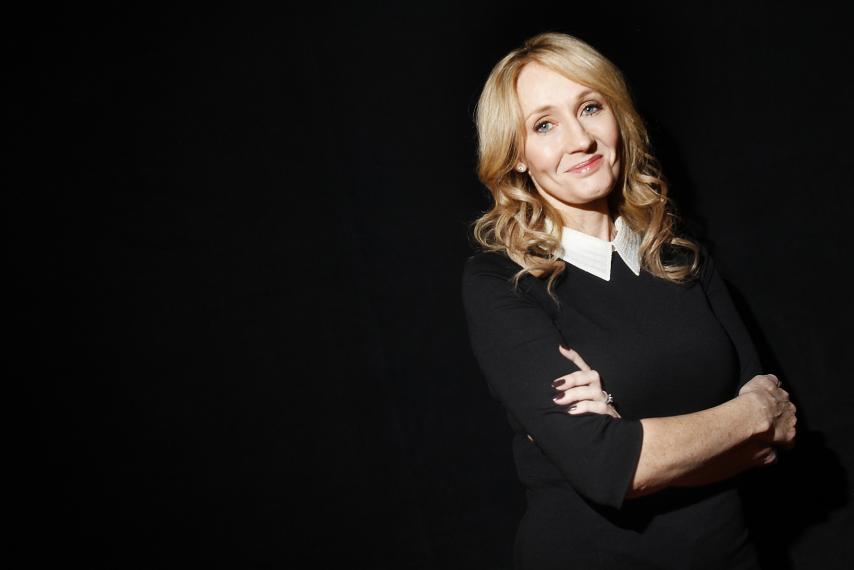 1. “To the well-organized mind, death is but the next great adventure.”-J.K. Rowling

2. “It matters not what someone is born, but what they grow to be.”-J.K. Rowling

3. “Do not pity the dead, Harry. Pity the living, and, above all those who live without love.”-J.K. Rowling

4. “Dumbledore watched her fly away, and as her silvery glow faded he turned back to Snape, and his eyes were full of tears.”After all this time?” “Always,” said Snape.”-J.K. Rowling

5. “Remember, if the time should come when you have to make a choice between what is right and what is easy, remember what happened to a boy who was good, and kind, and brave, because he strayed across the path of Lord Voldemort. Remember Cedric Diggory.”-J.K. Rowling

6. “The truth.” Dumbledore sighed. “It is a beautiful and terrible thing, and should therefore be treated with great caution.-J.K. Rowling

7. “Do you remember me telling you we are practicing non-verbal spells, Potter?” “Yes,” said Harry stiffly. “Yes, sir.””There’s no need to call me “sir” Professor.” The words had escaped him before he knew what he was saying.”-J.K. Rowling

8. “Just because you have the emotional range of a teaspoon doesn’t mean we all have.”-J.K. Rowling

9. “Numbing the pain for a while will make it worse when you finally feel it.”-J.K. Rowling

10. “We’re all human, aren’t we? Every human life is worth the same, and worth saving.”-J.K. Rowling

12. “He can run faster than Severus Snape confronted with shampoo.”-J.K. Rowling

13. “Mr. Moony presents his compliments to Professor Snape, and begs him to keep his abnormally large nose out of other people’s business.Mr. Prongs agrees with Mr. Moony, and would like to add that Professor Snape is an ugly git.Mr. Padfoot would like to register his astonishment that an idiot like that ever became a professor.Mr. Wormtail bids Professor Snape good day, and advises him to wash his hair, the slimeball.”-J.K. Rowling

15. “Indifference and neglect often do much more damage than outright dislike.”-J.K. Rowling

17. “Death’s got an Invisibility Cloak?” Harry interrupted again.”So he can sneak up on people,” said Ron. “Sometimes he gets bored of running at them, flapping his arms and shrieking…”-J.K. Rowling

18. “You’re a prefect? Oh Ronnie! That’s everyone in the family!””What are Fred and I? Next door neighbors?”-J.K. Rowling

19. “I DON’T CARE!” Harry yelled at them, snatching up a lunascope and throwing it into the fireplace. “I’VE HAD ENOUGH, I’VE SEEN ENOUGH, I WANT OUT, I WANT IT TO END, I DON’T CARE ANYMORE!” “You do care,” said Dumbledore. He had not flinched or made a single move to stop Harry demolishing his office. His expression was calm, almost detached. “You care so much you feel as though you will bleed to death with the pain of it.”-J.K. Rowling

20. “It is the unknown we fear when we look upon death and darkness, nothing more.”-J.K. Rowling

22. “Percy wouldn’t notice a joke if it danced naked in front of him wearing one of Dobby’s hats.”-J.K. Rowling

23. “You haven’t got a letter on yours,” George observed. “I suppose she thinks you don’t forget your name. But we’re not stupid-we know we’re called Gred and Forge.”-J.K. Rowling

24. “Books are like mirrors: if a fool looks in, you cannot expect a genius to look out.”-J.K. Rowling

25. “Don’t talk to me.” “Why not?” “Because I want to fix that in my memory for ever. Draco Malfoy, the amazing bouncing ferret…”-J.K. Rowling

26. “You know, Minister, I disagree with Dumbledore on many counts…but you cannot deny he’s got style…”-J.K. Rowling

27. “We do not need magic to transform our world. We carry all the power we need inside ourselves already.”-J.K. Rowling

28. “Why are they all staring?” demanded Albus as he and Rose craned around to look at the other students. “Don’t let it worry you,” said Ron. “It’s me. I’m extremely famous.”-J.K. Rowling

30. “Let us step into the night and pursue that flighty temptress, adventure.”-J.K. Rowling

31. “Fear of a name increases fear of the thing itself.”-J.K. Rowling

33. “Albus Severus,” Harry said quietly, so that nobody but Ginny could hear, and she was tactful enough to pretend to be waving to Rose, who was now on the train, “you were named for two headmasters of Hogwarts. One of them was a Slytherin and he was probably the bravest man I ever knew.”-J.K. Rowling

34. “Dumbledore says people find it far easier to forgive others for being wrong than being right.”-J.K. Rowling


35. “How do you feel, Georgie?” whispered Mrs. Weasley. George’s fingers groped for the side of his head. “Saintlike,” he murmured. “What’s wrong with him?” croaked Fred, looking terrified. “Is his mind affected?” “Saintlike,” repeated George, opening his eyes and looking up at his brother. “You see…I’m HOLEY, Fred, geddit?”-J.K. Rowling

36. “Holey? You have the the whole world of ear-related humor before you, you go for holey?” -J.K. Rowling

37. “I don’t believe in the kind of magic in my books. But I do believe something very magical can happen when you read a good book.”-J.K. Rowling

39. “There was a clatter as the basilisk fangs cascaded out of Hermione’s arms. Running at Ron, she flung them around his neck and kissed him full on the mouth. Ron threw away the fangs and broomstick he was holding and responded with such enthusiasm that he lifted Hermione off her feet.  “Is this the moment?” Harry asked weakly, and when nothing happened except that Ron and Hermione gripped each other still more firmly and swayed on the spot, he raised his voice. “OI! There’s a war going on here!”  Ron and Hermione broke apart, their arms still around each other.”I know, mate,” said Ron, who looked as though he had recently been hit on the back of the head with a Bludger, “so it’s now or never, isn’t it?” “Never mind that, what about the Horcrux?” Harry shouted. “D’you think you could just — just hold it in, until we’ve got the diadem?” “Yeah — right — sorry —” said Ron, and he and Hermione set about gathering up fangs, both pink in the face.”-J.K. Rowling

41. “Oh well… I’d just been thinking, if you had died, you’d have been welcome to share my toilet.”

43. “It is a curious thing, Harry, but perhaps those who are best suited to power are those who have never sought it. Those who, like you, have leadership thrust upon them, and take up the mantle because they must, and find to their own surprise that they wear it well.”-J.K. Rowling


44. “The scar had not pained Harry for nineteen years. All was well.”-J.K. Rowling

45. “He accused me of being Dumbledore’s man through and through.” “How very rude of him.” “I told him I was.” Dumbledore opened his mouth to speak and then closed it again. Fawkes the phoenix let out a low, soft, musical cry. To Harry’s intense embarrassment, he suddenly realized that Dumbledore’s bright blue eyes looked rather watery, and stared hastily at his own knee. When Dumbledore spoke, however, his voice was quite steady.  “I am very touched, Harry.”-J.K. Rowling

46. “Ginny!” said Mr. Weasley, flabbergasted. “Haven’t I taught you anything? What have I always told you? Never trust anything that can think for itself if you can’t see where it keeps its brain?”-J.K. Rowling

47. “What happened down in the dungeons between you and Professor Quirrell is a complete secret, so, naturally the whole school knows.”-J.K. Rowling

48. “The last enemy that shall be destroyed is death.”-J.K. Rowling


52. “We do not need magic to transform our world. We carry all of the power we need inside ourselves already.”-J.K. Rowling

53. “I hope you’re pleased with yourselves. We could all have been killed – or worse, expelled. Now if you don’t mind, I’m going to bed.”-J.K. Rowling

54. “You could say sorry,” suggested Harry bluntly. “What, and get attacked by another flock of canaries?” muttered Ron.”What did you have to imitate her for?””She laughed at my mustache!”
“So did I, it was the stupidest thing I’ve ever seen.”-J.K. Rowling

55. “It’s going to be all right, sir,” Harry said over and over again, more worried by Dumbledore’s silence than he had been by his weakened voice. “We’re nearly there … I can Apparate us both back .. don’t worry …” “I am not worried, Harry,” said Dumbledore, his voice a little stronger despite the freezing water. “I am with you.”-J.K. Rowling


57. “Seventeen, eh!” said Hagrid as he accepted a bucket-sized glass of wine from Fred.”Six years to the day we met, Harry, yeh remember it?””Vaguely,” said Harry, grinning up at him. “Didn’t you smash down the front door, give Dudley a pig’s tail, and tell me I was a wizard?” “I forget the details,” Hagrid chortled.”-J.K. Rowling

58. “Hello, Harry” said George, beaming at him. “We thought we heard your dulcet tones.” “You don’t want to bottle up your anger like that, Harry, let it all out,” said Fred, also beaming. “There might be a couple of people fifty miles away who didn’t hear you.” -J.K. Rowling

61. “But Dumbledore says he doesn’t care what they do as long as they don’t take him off the Chocolate Frog cards.”-J.K. Rowling

63. “You care so much you feel as though you will bleed to death with the pain of it.”-J.K. Rowling

64. “Where is Wood?” said Harry, suddenly realizing he wasn’t there.  “Still in the showers,” said Fred. “We think he’s trying to drown himself.”-J.K. Rowling


66. “Sometimes you remind me a lot of James. He called it my ‘furry little problem’ in company. Many people were under the impression that I owned a badly behaved rabbit.”-J.K. Rowling

68. “Well, you’re expelling us aren’t you?” said Ron.”Not today, Mr. Weasley.” Snape looked as though Christmas had been canceled.”-J.K. Rowling