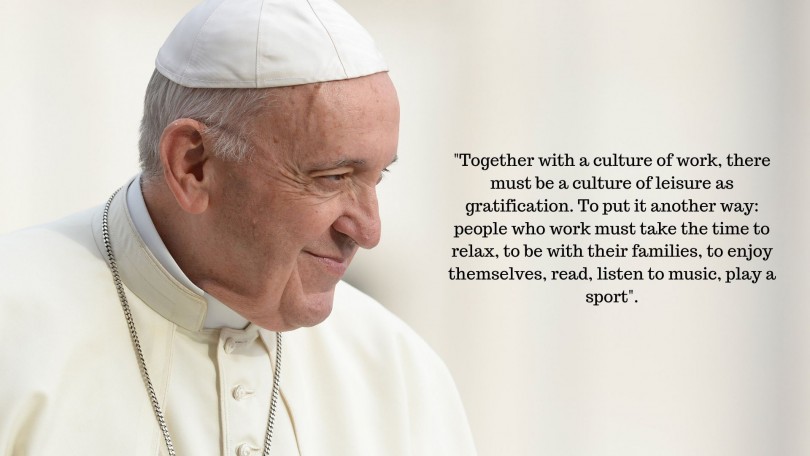 Pope Francis is the 266th and present Pope of the Roman Catholic Church. He is also called the Bishop of Rome. Before he entered this field, he was a chemical technician and a nightclub bouncer. In 1969 however, he decided to become a Catholic priest. After Pope Benedict XVI resigned in February 2013, Bergoglio was anointed as the new Pope.

However, he is a simple man who decided to stay in Domus Sanctae Marthae’s guesthouse instead of the papal apartment offered to him. He also refused the papal mozetta cape that most popes wear and asked for his piscatory ring to be silver instead of regular gold. The actions justify the personality of someone who became a priest to encourage people to maintain their faith.

Pope Francis is not a supporter of Marxism, and he is a strong opposer of issues like overdevelopment and consumerism. He decided to help in restoring cordial diplomatic relations between U.S and Cuba. The pope’s speeches, sayings, and quotes are, therefore, a highlight of the issues that he chooses to work upon. Here are some such inspiring thoughts that are going to help you take the leap of faith.

1. “It is not ‘progressive’ to try to resolve problems by eliminating a human life.” ― Pope Francis

2. “Right now, we don’t have a very good relation with creation.” ― Pope Francis

3. “No one can grow if he does not accept his smallness.” ― Pope Francis

5. “This is the struggle of every person: be free or be a slave.” ― Pope Francis

6. “The root of this possibility of doing good – that we all have – is in creation.” ― Pope Francis

10. “There is never a reason to lose hope. Jesus says: ‘I am with you until the end of the world.” ― Pope Francis

11. “To say that you can kill in the name of God is blasphemy.” ― Pope Francis

13. “Lord Jesus, make us capable of loving as you love.” ― Pope Francis

14. “God loves us. May we discover the beauty of loving and being loved.” ― Pope Francis

15. “We just cannot worry about ourselves.” ― Pope Francis

16. “The secret of Christian living is love. Only love fills the empty spaces caused by evil.” ― Pope Francis

20. “I dream of a church that is a mother and shepherdess.” ― Pope Francis

22. “God never tires of forgiving us; we are the ones who tire of seeking his mercy.” ― Pope Francis

23. “Mercy is the true power that can save humanity and the world from sin and evil.” ― Pope Francis

26. “What zest life acquires when we allow ourselves to be filled by the love of God!” ― Pope Francis

27. “This is the struggle of every person: be free or be a slave.” ― Pope Francis

28. “We must not reduce the bosom of the universal church to a nest protecting our mediocrity.” ― Pope Francis

29. “You cannot be in a position of power and destroy the life of another person.” ― Pope Francis

30. “Find new ways to spread the word of God to every corner of the world.” ― Pope Francis