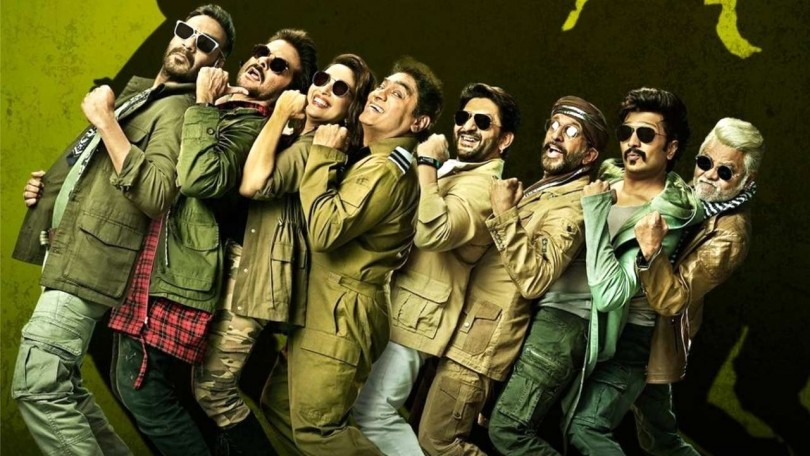 When a plane carrying a thief’s treasure crashes in Janakpur, a group of eccentric people and seasoned con artists compete against each other to find it first.

Total Dhamaal is the third installment in the Dhamaal franchise. A hidden booty of 50 crore leads to a mad chase amongst a bunch of greedy and eccentric characters.

The odd mix includes a bickering couple on the verge of a divorce, greedy siblings, local goons, a police commissioner and the mastermind of the loot.

It’s rare for a movie to announce so bluntly and accurately what it’s about and why it exists, but the numbskull Bollywood caper “Total Dhamaal” wastes no time: “It’s all about the money.”

These are the first words you hear, sung in English, in an opening musical number so shimmeringly gaudy it would make Las Vegas blush.

So, yes, the plot involves suitcases full of rupees, coveted and chased by the usual assortment of bumblers, gangsters and civilians. But also, the makers of “Total Dhamaal” needlessly remind us, the movie exists to celebrate and, of course, to make money.

The making part is probably a given. “Total Dhamaal” (“Total Fun”) is the third installment of a popular series, all directed by Indra Kumar, with a simple comic philosophy: No physical gag is too silly or too juvenile; and, repetition can only up the ante.

Movie Review: The Times of India

However, the ensemble star cast aside, this pursuit for comic adventure turns into a misadventure pretty early on in its ride.

To begin with, the film’s plot is weaker than the rickety bridge we have seen in the promo. But it hinges on many strong shoulders, who deliver despite obvious flaws in the writing.

The film opens on quite a paisa vasool note with the grand title song introducing each one of them. They are immediately bunged in together in an unconvincing plot twist.

While everyone is in pairs of two, it’s the magical pairing of Anil and Madhuri that brings out the most LOL moments. The duo still share a crackling chemistry and an impeccable partnership for comedy.

Anil is hilarious as the distressed pati with his amusing Gujarati accent and Madhuri uses her natural flair for Marathi to hit all the right comic notes.

While Ajay Devgn performs well within the limitations of his poorly written character, it’s the otherwise excellent Sanjay Mishra, who comes off as grossly annoying.

The third installment of the ‘Dhamaal’ franchise, ‘Total Dhamaal’, is a slapstick ride complete with flying cars, crashing helicopters and fal ling bridges.

A bickering Gujarati-Marathi couple played by Kapoor and Dixit get a tip-off from a dying man about a treasure hidden in a zoo in a place called Janakpur.

The film then introduces a bunch of eccentric characters who all get involved in a mad chase for the booty.

Despite a stellar star cast, the film’s plot and narrative is clumsy and fails to impress. While there are some dialogues and scenes that deserve a few laughs, the rest of film gets tiresome.