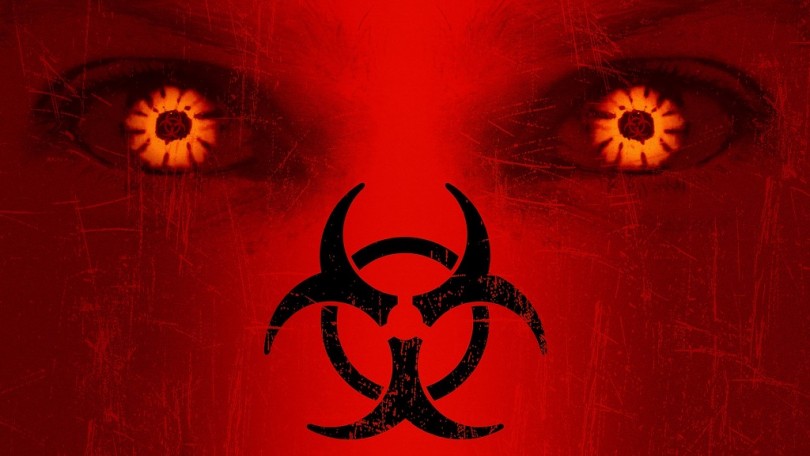 Animal activists invade a laboratory with the intention of releasing chimpanzees that are undergoing experimentation, infected by a virus -a virus that causes rage.

The naive activists ignore the pleas of a scientist to keep the cages locked, with disastrous results.

Twenty-eight days later, our protagonist, Jim, wakes up from a coma, alone, in an abandoned hospital. He begins to seek out anyone else to find London is deserted, apparently without a living soul.

After finding a church, which had become inhabited by zombie-like humans intent on his demise, he runs for his life.

Selena and Mark rescue him from the horde and bring him up to date on the mass carnage and horror as all of London tore itself apart.

This is a tale of survival and ultimately, heroics, with nice subtext about mankind’s savage nature.

In terms of plot, this postapocalyptic horror tale about an epidemic that decimates most of England is pretty familiar stuff, the most obvious referents being Richard Matheson’s I Am Legend, its various movie spin-offs, and George Romero’s zombie pictures.

But Danny Boyle’s purposeful direction and Mark Tildesley’s imaginative and resourceful production design keep this fresh and edgy; the images of a wasted London and the details of a paramilitary organization in the countryside are both creepy and persuasive.

Television veteran Danny Boyle began his filmmaking career with the double bang of Shallow Grave and Trainspotting but continued it with a whimper (The Beach, the disastrous A Life Less Ordinary, the aborted Alien Love Triangle).

Boyle’s latest film, 28 Days Later, follows a similar pattern, getting off to a terrifying start before devolving into gory bloodshed and ham-fisted allegory.

The script came from Alex Garland, who wrote the novel on which The Beach was based, and while those two films are miles apart in terms of budgets and genres, they have surprisingly similar themes.

Each dissects a makeshift society that’s set apart from the rest of civilization, and that crumbles due to the cruelty inherent in human nature.

The movie starts with the usual sci-fi tropes: mankind’s experiments go haywire with destructive results. The epidemic begins with chimps infected with “rage” (as part of research into what we presume is a cure for violent impulses) liberated by animal rights activists.

The film then cuts to a young man named Jim (Cillian Murphy) waking up from a 28-day coma following a car accident. Finding the hospital abandoned, he walks out and wanders through the empty London streets.

With few exceptions, those who haven’t fled the country after the outbreak are either dead or have become “the infected.” And it is with these survivors—Selena (Naomi Harris), widowed Frank (Brendan Gleeson), and his teenage daughter Hannah (Megan Burns)—that Jim will struggle to stay alive.

The group sleeps amidst debris in deserted buildings, eats canned food gleaned from an abandoned supermarket, fights off the Infected, and worries about having to kill one another in the event that one of them becomes contaminated.