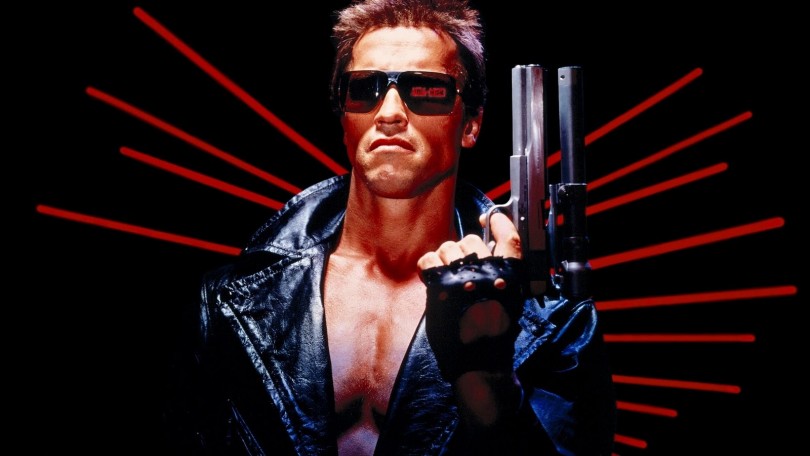 In the future, Skynet, a computer system fights a losing war against the humans who built it and who it nearly exterminated. Just before being destroyed, Skynet sends a Terminator back in time to kill Sarah, the mother to be of John Connor, the Leader of the human resistance.

The terminator can pass for human, is nearly indestructible, and has only one mission, killing Sarah Connor. One soldier is sent back to protect her from the killing machine. He must find Sarah before the Terminator can carry out it’s mission.

“The Terminator” brings film violence into the realm of the surreal. A slickly made, shoot-’em-up sci-fi fantasia, it stands for the proposition that, inside the most staid local theater, there is a drive-in yearning to be free.

Sometime in the future, a Strategic Air Command computer decides to eliminate human life altogether (that sure makes its job easier); but the survivors of the ensuing holocaust, led by the mysterious John Connor, band together against the machines. So the wily computer time-warps a Terminator (Arnold Schwarzenegger) into contemporary Los Angeles to kill Connor’s mother Sarah (Linda Hamilton), before she can conceive him. Her only hope lies in Kyle Reese (the attractively earnest Michael Biehn), one of Connor’s Merry Men who zips into the past to protect her.

A Terminator (as if you didn’t know) is a killing machine made of TV cameras, microprocessors and indestructible metal, onto which living human tissue is grafted to lend a human appearance – it’s sort of the dark side of the “Six Million Dollar Man.” Director and cowriter James Cameron gives us fascinating glimpses of a Terminator’s eye view a television screen in infrared, with gobs of meaningless data computer-printed along the borders. And Emmy-winning makeup artist Alan Winston (“The Autobiography of Miss Jane Pittman”) achieves some startlingly grotesque effects, particularly when the Terminator, stopping to repair the damage from a few shotgun blasts, saws into his own flesh with an Exacto blade.

She’s a bit flustered, but hey, you’d be flustered too if some guy who is your unborn son’s best friend came back from the future to save you from a killing machine that’s hunting you down.

All right, so it’s rather confusing. But in the context of this wildly imaginative movie, it’s all, rather exciting, too. Let me try to explain. There’s this nuclear war, see, which was started by machines and now the machines are taking over.

Anyway, the leader of the human revolution is a guy named John Conner. They can’t get to Conner, but the machines figure if they send a terminator back in time to kill Conner’s mother, there’ll be no Conner and, therefore, no resistance movement.

At the time of The Terminator’s release, its star, Arnold Schwarzenegger, had already appeared in Conan the Barbarian and Conan the Destroyer, but The Terminator would be the genesis of Schwarzenegger’s decades-long stint as an A-list action star. The film was also a big break for its fledgling director, James Cameron (Avatar).

Schwarzenegger plays a cyborg sent from the future (2029) to kill the mother, Sarah Connor (Linda Hamilton), of a rebel fighter, John before she’s able to give birth. In the post-apocalyptic future, mankind faces possible extinction because machines rule the world, and it’s John who’s got the wherewithal to push back.

On Cameron’s timeline, the apocalypse is just a decade away. In reality, all machines are doing are replacing unskilled labor, and causing an economic meltdown as opposed to a nuclear one. But hope springs eternal.

The Terminator more closely resembles some of its clunky predecessors when it comes to aesthetics. It’s particularly reminiscent of Escape from New York, although Cameron’s pacing is far more frantic which tends to happen when the heroes are constantly foiled by a homicidal robot.