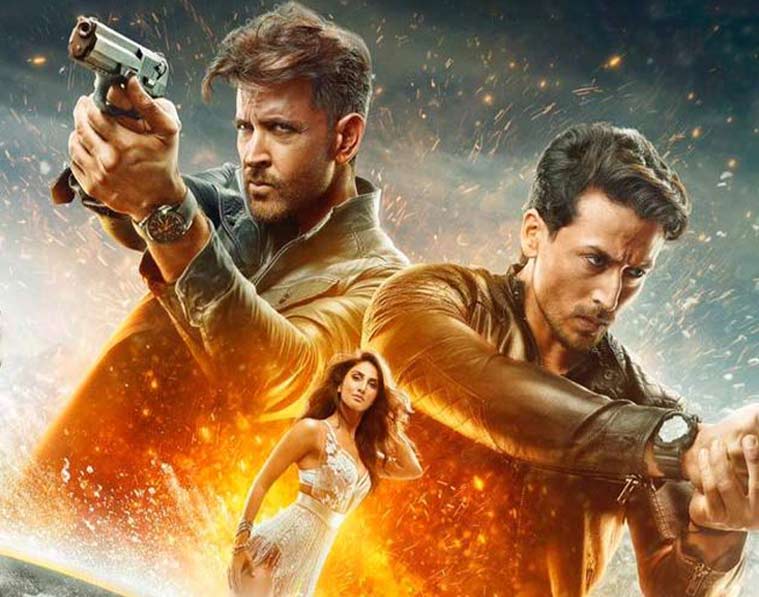 The most awaited movie of the year has finally hit the theaters and are fans not elated. Obviously yes they are as this is their chance to watch two Greek gods fighting on cinema screens. Yes, you guessed right we are talking about the movie War which was released on 2nd October and has unleashed a frenzy of sorts.

Director Siddharth Anand has brought Hrithik Roshan again and this time he is accompanied by the newest heartthrob i.e. Tiger Shroff. Along with are some exotic locales, awesome stunt sequences and a ravishing lead heroine in Vaani Kapoor. A true blue contemporary masala film is ready for the viewers to relish.

The movie starts off with Khalid (Tiger Shroff) being given the challenge to bring back his mentor Kabir (Hrithik Roshan) back to books. This task has been assigned to him by his senior Colonel Luthra (Ashutosh Rana) as Kabir has forgotten his loyalties for the country and needs to be stopped.

From here the director spins a web of deceit, intrigue, and mystery and keeps the audience guessing over what is coming next. Each scene is a revelation as the viewers are transported into a world of flashy cars, slick sequences and bitter fighting between mentor and protégé.

Both Hrithik Roshan and Tiger Shroff have actually set the screen on fire and this just does not pertain to their action sequences only, They are looking drop-dead gorgeous and obviously not to mention the dance skills which are put to good use.

Shroff tries very hard to match up with Roshan and succeeds to quite an extent. However, the bigger piece of cake definitely goes to Roshan as his acting chops are a notch higher.

Vaani Kapoor as Naina has a small role though she looks confident in whatever scenes she has been allotted. The climax is slightly off the mark but that can be excused. Overall an enriching watch for those who love sleek action movies and want to explore the world through the movies.

Director Siddharth Anand and Hrithik Roshan team up again for an action thriller after their last film, Bang Bang. This time around, Tiger Shroff is added to the mix too. The result? A story that entertains you with the measured predictability characteristic of a Hindi film- a true blue contemporary Masala-entertainer.

So, a super-qualified Indian intelligence officer Kabir (Hrithik Roshan) has gone rogue much to his senior Colonel Luthra’s (Ashutosh Rana) dismay. Who then is going to bring him to heel before he goes too far? Khalid (Tiger Shroff), Kabir’s protégé, volunteers to do the job because nothing can be higher than one’s love for motherland, not even the love and admiration for one’s mentor.

Two stars and firm favourites of the action genre, Hrithik Roshan and Tiger Shroff, lock horns in War. It’s a juicy proposition for fanboys and girls of both actors.

A sort of millennial throwback to the 90s showdown between Sanjay Dutt and Jackie Shroff in Subhash Ghai’s Khalnayak. But apart from this talking-point premise, War, serves up a lot more for the action-movie buffs.

It has lots of stunts, thrills, twists and just enough masala and explosions to keep you engaged in the first half, but once the big reveals happen in the second half of the story, it goes awry. Where the film excels in action set pieces, it genuinely falls short on the story front.

But the story is in all fairness, secondary to the idea of watching two handsome hunks squaring off in a duel of high-octane stunts (action directors — SeaYoung Oh, Parvez Shaikh, Franz Spilhaus and Paul Jennings). It’s like the two heroes, Hrithik and Tiger, known for their bulging muscles and crisp six-pack abs are out to beat each other in a competition of pure brawn.

WAR is the story of two patriotic soldiers fighting against each other. Khalid (Tiger Shroff) is the son of an army officer, who had joined hands with the enemies.

As soon as Khalid’s mother (Soni Razdan) found out, she informed the army and the father got killed by fellow officer, Kabir (Hrithik Roshan). For an important mission, Khalid is assigned a part in Kabir’s team. Kabir obviously is apprehensive but Khalid wins him over with his loyalty and bravery.

The story then moves two years ahead. Kabir is assigned the duty of eliminating a dreaded terrorist. Instead of killing him, Kabir bumps off his commanding officer, V K Naidu (Mohit Chauhan). Khalid and others are shocked that someone like Kabir has gone rogue. Khalid is instructed to kill Kabir immediately before he causes any more harm.

While Khalid is trying to find out Kabir’s whereabouts, the latter steals army equipment in a daredevil mid-air stunt.

In another act of bravado, Kabir comes in front of Khalid and informs him that his next target is a certain Dr. Utpal Biswas (Arif Zakaria). What happens next forms the rest of the film.