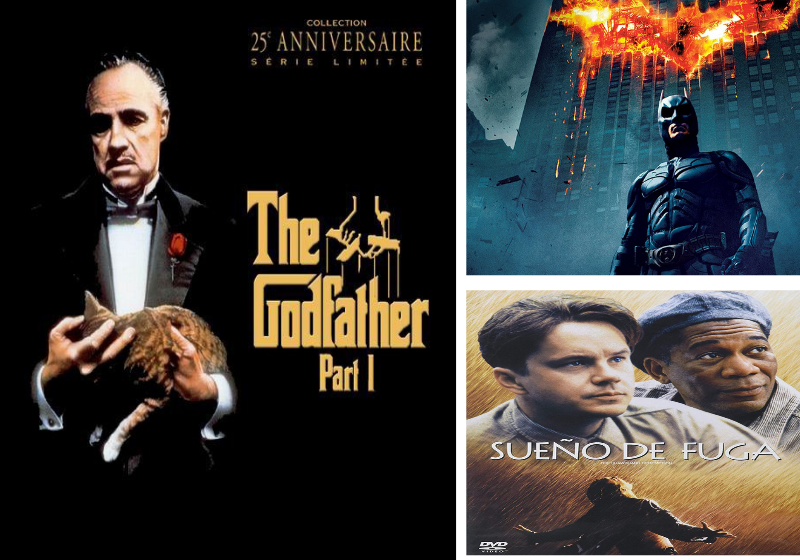 Check out the 20 top rated movies by IMDb.com, the Internet’s most popular movie site. The list of the top rated movies include films like The Shawshank Redemption, Pulp Fiction, The Godfather, etc.

Two imprisoned men bond over a number of years, finding solace and eventual redemption through acts of common decency. The film chronicles the experiences of a formerly successful banker as a prisoner in the gloomy jailhouse of Shawshank after being found guilty of a crime he did not commit. The film portrays the man’s unique way of dealing with his new, torturous life; along the way, he befriends a number of fellow prisoners, most notably a wise long-term inmate named Red.

The Godfather “Don” Vito Corleone is the head of the Corleone mafia family in New York. He is at the event of his daughter’s wedding. Michael, Vito’s youngest son and a decorated WW II Marine are also present at the wedding. Michael seems to be uninterested in being a part of the family business. Vito is a powerful man and is kind to all those who give him respect but is ruthless against those who do not. But when a powerful and treacherous rival wants to sell drugs and needs Don’s influence for the same, Vito refuses to do it. What follows is a clash between Vito’s fading old values and the new ways

Francis Coppola and Mario Puzo continue their epic saga into the lives of the infamous Corleone family, which is headed by Michael Corleone (Al Pacino). It is a film which does better than its predecessor, “The Godfather”. IT is both a sequel and prequel showing the rise of the young vito and moral decline of Michael . Both characters are brought to life with uncanny ability by Robert De Niro and Al Pacino .

Dark, yes, complex, ambitious. Christopher Nolan and his co-writer Jonathan Nolan deserve a standing ovation.Set within a year after the events of Batman Begins (2005), Batman, Lieutenant James Gordon, and new District Attorney Harvey Dent successfully begin to round up the criminals that plague Gotham City, until a mysterious and sadistic criminal mastermind known only as “The Joker” appears in Gotham, creating a new wave of chaos.

An eighteen-year-old boy from a slum background is accused of stabbing his father to death and faces the electric chair if convicted. Eleven of the men believe the boy to be guilty; only one (Henry Fonda) has doubts. Can he manage to convince the others?

In German-occupied Poland during World War II, industrialist Oskar Schindler gradually becomes concerned for his Jewish workforce after witnessing their persecution by the Nazis.Oskar Schindler is a vainglorious and greedy German businessman who becomes an unlikely humanitarian amid the barbaric German Nazi reign when he feels compelled to turn his factory into a refuge for Jews. Based on the true story of Oskar Schindler who managed to save about 1100 Jews from being gassed at the Auschwitz concentration camp, it is a testament to the good in all of us.

The final confrontation between the forces of good and evil fighting for control of the future of Middle-earth. Gandalf and Aragorn lead the World of Men against Sauron’s army to draw his gaze from Frodo and Sam as they approach Mount Doom with the One Ring. This is a fairy story of human endeavour, the defeating of power cliques and the triumph of the human spirit.

Jules Winnfield (Samuel L. Jackson) and Vincent Vega (John Travolta) are two hit men who are out to retrieve a suitcase stolen from their employer, mob boss Marsellus Wallace (Ving Rhames). Wallace has also asked Vincent to take his wife Mia (Uma Thurman) out a few days later when Wallace himself will be out of town. Butch Coolidge (Bruce Willis) is an aging boxer who is paid by Wallace to lose his fight. The lives of these seemingly unrelated people are woven together comprising of a series of funny, bizarre and uncalled-for incidents.
One of the early scenes in “Pulp Fiction” features two hit-men discussing what a Big Mac is called in other countries. Their dialogue is witty and entertaining, and it’s also disarming, because it makes these two thugs seem all too normal. If you didn’t know better, you might assume these were regular guys having chit-chat on their way to work.

This is the third,and arguably the best, of the so-called “spaghetti western” trilogy. Blondie (The Good) is a professional gunslinger who is out trying to earn a few dollars. Angel Eyes (The Bad) is a hit man who always commits to a task and sees it through, as long as he is paid to do so. And Tuco (The Ugly) is a wanted outlaw trying to take care of his own hide.

A nameless first person narrator (Edward Norton) attends support groups in attempt to subdue his emotional state and relieve his insomniac state. When he meets Marla (Helena Bonham Carter), another fake attendee of support groups, his life seems to become a little more bearable. However when he associates himself with Tyler (Brad Pitt) he is dragged into an underground fight club and soap making scheme.
Fight Club is a brash slap in the face of consumerism and the working dead. It questions reality. It is strikingly thought provoking and visually stimulating.
There has been some controversy about the violence in this film but it is not gratuitous violence, it is part of the story and serves it well.

An ancient Ring thought lost for centuries has been found, and through a strange twist of fate has been given to a small Hobbit named Frodo. When Gandalf discovers the Ring is in fact the One Ring of the Dark Lord Sauron, Frodo must make an epic quest to the Cracks of Doom in order to destroy it. However, he does not go alone. He is joined by Gandalf, Legolas the elf, Gimli the Dwarf, Aragorn, Boromir, and his three Hobbit friends Merry, Pippin, and Samwise.

Forrest Gump is a simple man with a low I.Q. but good intentions. He is running through childhood with his best and only friend Jenny. His ‘mama’ teaches him the ways of life and leaves him to choose his destiny. Forrest joins the army for service in Vietnam, finding new friends called Dan and Bubba, he wins medals, creates a famous shrimp fishing fleet, inspires people to jog, starts a ping-pong craze, creates the smiley, writes bumper stickers and songs, donates to people and meets the president several times. However, this is all irrelevant to Forrest who can only think of his childhood sweetheart Jenny Curran, who has messed up her life.
This is a powerful yet charming movie; fun for its special effects and profound in how it keeps you thinking long after it’s over.

Luke Skywalker, Han Solo, Princess Leia and Chewbacca face attack by the Imperial forces and its AT-AT walkers on the ice planet Hoth. While Han and Leia escape in the Millennium Falcon, Luke travels to Dagobah in search of Yoda. Only with the Jedi Master’s help will Luke survive when the Dark Side of the Force beckons him into the ultimate duel with Darth Vader.

Dom Cobb (Di Caprio) is a skilled thief, the absolute best in the dangerous art of extraction, stealing valuable secrets from deep within the subconscious during the dream state, when the mind is at its most vulnerable. Cobb’s rare ability has made him a coveted player in this treacherous new world of corporate espionage, but it has also made him an international fugitive and cost him everything he has ever loved. Now Cobb is being offered a chance at redemption. One last job could give him his life back but only if he can accomplish the impossible, inception.

The continuing quest of Frodo and the Fellowship to destroy the One Ring. Frodo and Sam discover they are being followed by the mysterious Gollum. Aragorn, the Elf archer Legolas, and Gimli the Dwarf encounter the besieged Rohan kingdom, whose once great King Theoden has fallen under Saruman’s deadly spell.

After the devastating events of Avengers: Infinity War (2018), the universe is in ruins due to the efforts of the Mad Titan, Thanos. With the help of remaining allies, the Avengers must assemble once more in order to undo Thanos’s actions and undo the chaos to the universe, no matter what consequences may be in store, and no matter who they face.

Also Read:  60 Facts About Avengers: Endgame, The Biggest Movie Of The Year!

Set in the early 60s, the story involves R.P. McMurphy (Jack Nicholson) and his arrival at a mental institution in Salem, Oregon (where the film was shot). McMurphy has a criminal past and has once again gotten himself into trouble and is sentenced by the court. To escape labor duties in prison, McMurphy pleads insanity and is sent to a ward for the mentally unstable. Once here, McMurphy both endures and stands witness to the abuse and degradation of the oppressive Nurse Ratched, who gains superiority and power through the flaws of the other inmates.

Also Read: One Flew Over the Cuckoo’s Nest is a novel by Ken Kesey that was first published in 1962.

Goodfellas”–based on true events–explores the lives of gangsters, chronicling the events through the eyes of Henry Hill (Ray Liotta), who gets involved with the Mafia at a young age and continues his “career” throughout the film.
As he gets older, he marries and has children, but still works for the organized crime family, under mob boss Paulie (Paul Sorvino); and he is friends with Jimmy (Robert De Niro), a calm, steady gangster; and Tommy (Joe Pesci), a wild man with serious mental problems.

Eventually Henry’s life goes down the gutter, leading to drug abuse and paranoia, that leads to other unfortunate incidents.

Robert De Niro gives one of his best performances — ever — as Jimmy, even if he’s not in the film as much as you might be lead to believe from the front cover.

The Matrix is one of the best sci-fi movies ever made! Thomas Anderson (Keanu Reeves) is an IT specialist in his day-to-day job and a hacker (alias Neo) during the night. He is looking for Morpheous (Lawrence Fishburn) who could give him the answer to the question ‘What is the Matrix?’ The more relevant questions to ask, though, would be “How would you know the difference between the dream world and the real world?” and “How would you know if what is happening right now is not a virtual reality?”

Akira Kurosawa was and is considered the master of east-western film-making (in that he made his Japanese films accessible for fans of American westerns while still making the movies his country found popular). A veteran samurai, who has fallen on hard times, answers a village’s request for protection from bandits. He gathers 6 other samurai to help him, and they teach the townspeople how to defend themselves, and they supply the samurai with three small meals a day. The film culminates in a giant battle when 40 bandits attack the village.