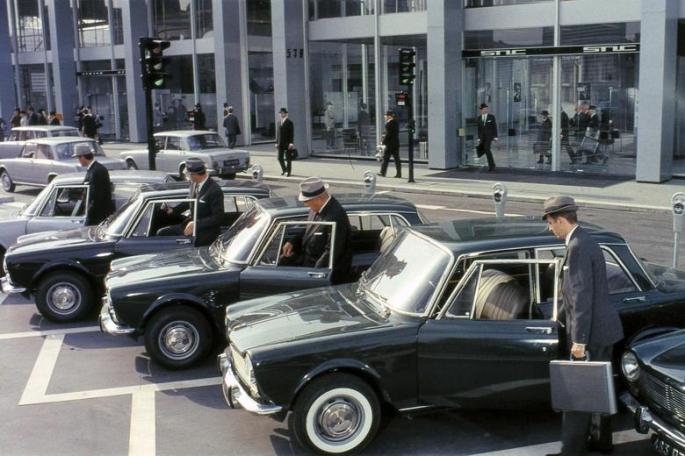 Monsieur Hulot has to contact an American official in Paris, but he gets lost in the maze of modern architecture which is filled with the latest technical gadgets.

Caught in the tourist invasion, Hulot roams around Paris with a group of American tourists, causing chaos in his usual manner.

For this 1967 film, Jacques Tati—the unsurpassed satirist of technology’s inhuman allure—built a grandiose, gleaming glass-and-steel skyscraper city on the outskirts of Paris and conceived his comic crises in the details of its disproportions.

In the two zones of action (they hardly count as stories), Tati plays Monsieur Hulot, a tall, spring-jointed, aging Everyman who goes to see a bureaucrat about a document, while a busload of American tourists blithely disembark in a Paris of iconic landmarks that they see only fleetingly as distant reflections in glass doors.

The spectacular settings give rise to desire and its frustration when, in the neon twilight, Hulot’s weary glance through the windows of parallel buses meets that of Barbara (Barbara Dennek), a fresh-scrubbed young American.

Emotions, identities, and even bodily functions are distorted by the mechanized uniformity, but Tati’s despair is modulated by a sense of wonder.

Jacques Tati’s Playtime is an astringent antidote to Paris movies that are as sickly as macaroons and stuffed with views of the Eiffel Tower by night.

Instead, Tati’s City of Light is a minimalist, modernist stage, set in Orly Airport and glass-walled office blocks by the Périphérique ring road.

The glass boxes become Kafkaesque bureaucratic mazes and display cases for the amusing antics and choreography of the humans trapped inside.

The cast, of immaculate Parisians and coiffed and heeled American tourists might be from a silent episode of Mad Men.

French actor-filmmaker Jacques Tati’s 1967 masterpiece still holds up as a feast of subtle sight gags, playful noise and, above all, visual wonders.

Tati gives us events more than story as Hulot finds himself mixed up with a coachload of American tourists at the airport, out and about in the city and at the opening of a fancy new restaurant. Classic tourist sights (the Eiffel Tower and Sacré-Coeur) are seen only in brief reflections.

The influence of ‘Playtime’ on filmmakers like Wes Anderson, Roy Andersson, Aki Kaurismäki and even Pedro Almódovar becomes clear as you wonder at the detail of Tati’s unique world.

The humour is low-key, although there are some fantastic and beautifully simple jokes along the way.

The straight lines and colour schemes, all greys, silvers and blues, only give way to something approaching a more palatable and joyful anarchy as the film comes to a close. Genius.