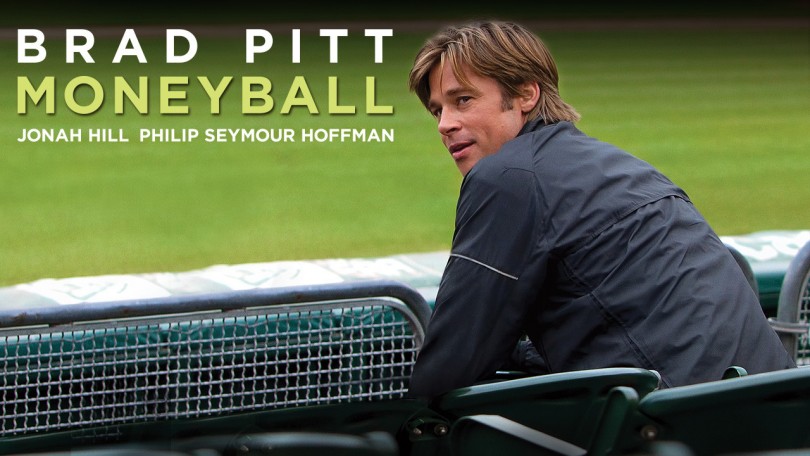 The Oakland A’s end their 2001 season with a loss in the AL fifth game of a best of five elimination series, still an admirable accomplishment seeing as the A’s are considered a poor team with a payroll one-third of that of a rich team like the New York Yankees.

During the off season, they lose three of their star players through free agency, most problematic being first baseman Jason Giambi.

Without more money which he doesn’t get from owner Stephen Schott, the A’s GM, Billy Beane, knows that they will never win the World Series as richer teams will always be able to pilfer their best players – ones they have been able to nurture – with more lucrative contracts.

Billy knows they have to think differently about how to replace the three, looking at what they require in combination rather than looking at the three as individuals, which is different than the way scouts have looked at players over the sport’s history.

In a meeting with Cleveland Indians management about players, Billy meets Peter Brand, a quiet Yale Economics graduate, who works for the Indians doing player analysis.

Upon questioning Peter later in private, Billy realizes that purely academic Peter has much the same thought process as he does.

Billy hires him as the A’s Assistant GM after receiving what he considers the correct answer to Billy’s question on his own checkered past as a first round 1979 draft pick which led to notoriety as a failure as a player.

But once on the payroll, Peter convinces Billy to look at the entire dugout, and acquire undervalued players for what they can do in order for the team to win.

As an example, they acquire former catcher Scott Hatteberg, whose career is seen as being over by all other teams due to an elbow injury that doesn’t allow him to throw.

Although not a hitter, they acquire him for his ability to “get on base” in whatever way required (usually by walks), and plan to teach him how to play first base, a generally non-throwing position.

These moves don’t sit well with the A’s scouting team and sports analysts. Problematic is that the A’s Manager, Art Howe, who also doesn’t agree with or understand the strategy, refuses to listen to Billy about how best to manage the team as assembled.

Billy knows that his and Peter’s jobs are on the line if they don’t produce, which he realizes means nothing less than winning the World Series. But more important to Billy is to show the world of baseball that his way is the right way. 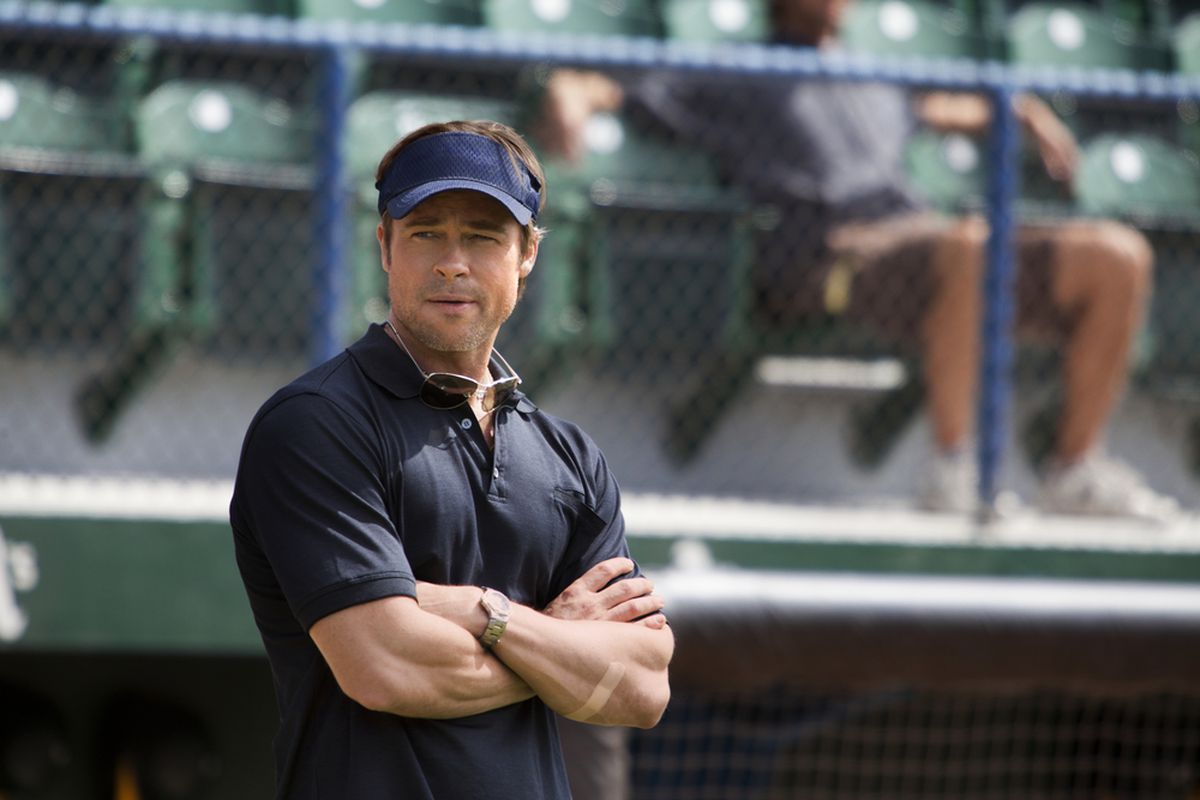 There are no stirring speeches, no magic moments, no naturals and no fields of dreams in “Moneyball,” which is instead driven by the dry science of baseball statistics.

If that sounds as thrilling as a Sudoku tournament, think again. “Moneyball” is a winner, one of the freshest and smartest sports movies in years.

Based on Michael Lewis’ nonfiction book, “Moneyball” only seems to be a classic underdog story. Its sort-of heroes are the 2002 Oakland A’s, a cash-strapped team routinely pummeled by richer franchises.

“There are rich teams, there are poor teams,” observes general manager Billy Beane, played by a rough-edged but vulnerable Brad Pitt. “Then there’s 50 feet of crap. And then there’s us.”

Billy distrusts the intuition of scouts; he’s a former player who was pumped full of dreams but flopped on the field.

Enter another not-quite hero, Peter Brand (Jonah Hill, seriously good), a Yale whiz kid with a different, if somewhat soulless, philosophy. “Your goal shouldn’t be to buy players,” Peter says, “it should be to buy wins.” Impressed, Billy buys Peter. 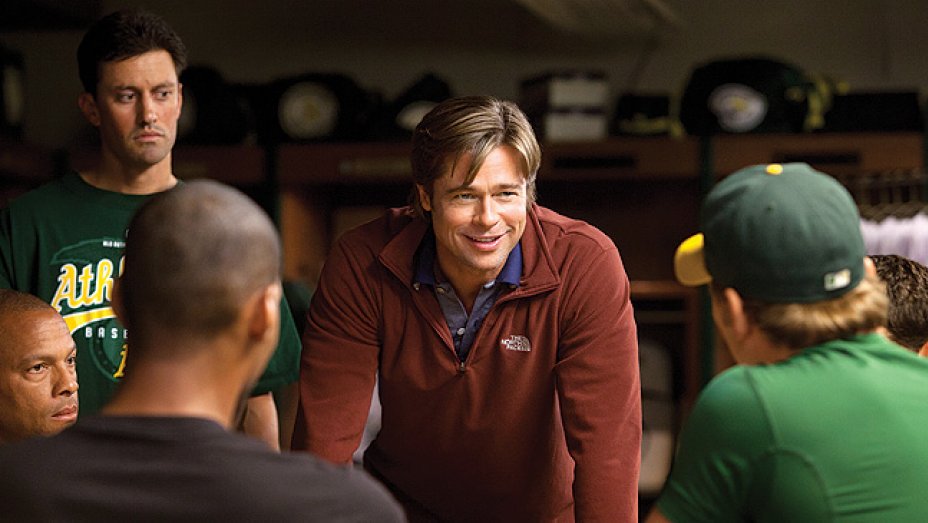 The one baseball game given serious time in Moneyball is the Sept. 4, 2002, showdown in Oakland. Over 55,000 fans saw the Athletics blow a huge lead over Kansas City, then win on Scott Hatteberg’s homer.

It extended their great winning streak to 20 games, and is now the movie’s sweet spot.

But Moneyball is not sweet. Nor is it much about the mystique and glory, the fabled field of dreams. It sticks close to Oakland’s general manager Billy Beane, a former hot prospect (raised in San Diego) who bombed in the major leagues as a player.

Brad Pitt is at the top of his own game as Beane. Cocky and often nonchalant, he is gnawed by doubts that he tries to cover by grabbing a snack or pitching a grin.

When the Yankees use a money pot three times the size of Oakland’s and hire away his star talents, Beane determines to change the system (his predecessor, Sandy Alderson, had begun this process). 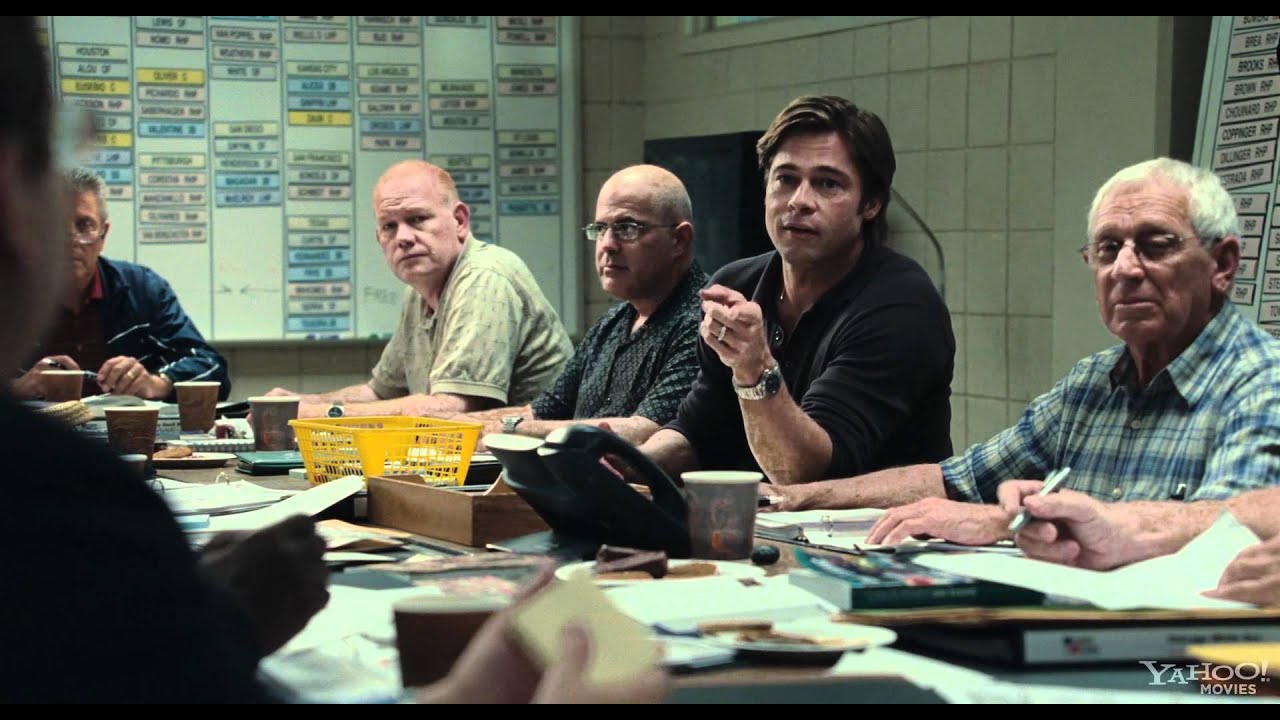 This is a film that puts a funky kind of Gladwellian-Freakonomic spin on the underdog sports movie. It is intriguing despite being, for me, in an untranslated foreign language. Much of it is about the technical business of baseball, which is lost on me, and also, I suspect, on many British audiences.

But it has this strange, beady-eyed sense of its own intelligent importance, created by co-screenwriters Steven Zaillian and Aaron Sorkin – heavy-hitters both. It is the true story of Billy Beane, played by Brad Pitt, manager of the Oakland A’s, a failing and cash-poor baseball team.

Beane employs nerdy-brainiac Yale economist Peter Brand (Jonah Hill) to apply a statistical, almost actuarial technique of recruiting undervalued players cheaply, on the basis of their hitherto unnoticed records, which would, combined, create an enhanced probability of success. It turns out to be a glorious triumph: a kind of blackjack-card-counting for baseball. But is it turning the sport he loves into a soulless game of number-crunching? It’s an engaging, almost exotic film.