Home » Why SSDs Are Better Than Traditional Hard Drives? 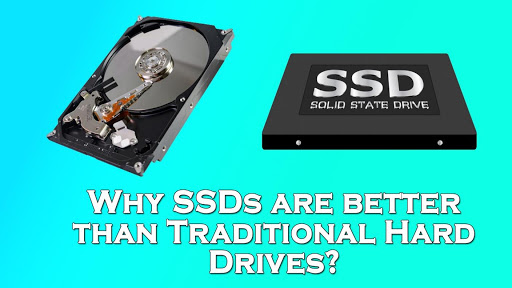 To understand SSD in a better way, let me first give you an in-depth idea about HDD. This would help you to compare and know that why you need to buy SSD instead of the traditional Hard disks drive.

The hard disks drive made up of platters that are covered in magnetic material that spins at a very high speed.

The HDD contains mechanical arms with read and write heads that write the ones and zeroes on each platter and access all the available spaces.

Here the mechanical heads physically attempt to locate a specific sector on each platter and so accessing a hard disk requires time.

Now, if you replace all these mechanical and spinning pieces of the hard drive with memory, then you have the SSD. Instead of the spinning platters, the SSD layers of solid-state memory stores data in keys and pages.

And so, here the data access (both read and write) is much faster compared to the spinning mechanical parts in a hard drive.

With growing technology, SSD is known to be one of the newest trends in data storage hardware. When it comes to Advantages of SSD over HDD Server Hard Drive, you should think about various factors and budget, depending on that decide which of them would be feasible for you.

Let me give you detailed knowledge on what SSD offers and its benefits so that it can be easy for you to decide if SSD is good for you.

Solid-state drives have an access speed (both read and write) of 35 to 100 microseconds. While the Hard disks drives take about 5000 to 10000 microseconds to access data. Which means SSD is 100 times faster than HDD.

Due to non-moving parts, SSD’s are more durable when used in extreme and harsh environment. It is resistant to various factors like accidental drops, shocks, extreme temperatures, vibrations, and magnetic field when compared to HDDs.

HDD drive surfaces and mechanical parts are more susceptible to environmental damages when compared to SSD.

HDDs if powered down for decades in an environmentally controlled environment then is known to lasts for decades. But with earlier SSD this was not the case, they were not so durable.

The implementation of storage intelligence in the controller of SSD protects it against data leakage and corruption. The technology also includes garbage collection, error-correcting code, and read and write caching.

Just to brush you up again, the SSD’s doesn’t have any moving part as what HDDs have. HDDs are made of mechanical parts that allow slow data access.

SSD houses controllers and flash memory, and so you receive faster access time, low acoustics and at the same time lower power consumption compared to an HDD.

SSD uses the same form factor as what the HDDs have so that the users can easily replace the SSD with existing HDD on their servers.

When it comes to hosting, solid-state drives are always preferable over the traditional HDD. Even the traditional HDDs that have a spindle speed of 15K RPM cannot compete with the NAND flash SSDs. Because of the speed, the SSD delivers great performance.

The instant data access capability enables you to improve your online presence. Which instead results in better user experience. Faster performance in a drive means the drive has a faster boot time, higher bandwidth, and faster data movement.

The SSD’s beat the HDD by a mile. Speed is the main factor that makes SSD best when compared to HDD. The average read speed of HDD is 230 megabytes per second, whereas SSD can read at a speed of 700 megabytes/sec.

The write speed difference is also just striking as SSD writes a data at 500 MB/sec whereas HDD runs at 190 MB/sec.

The mechanical components of the hard drive are in constant movement, and so they hold a higher chance of breaking down faster. Whereas the SSD uses electricity to generate data responses.

No moving parts, no motor to break makes the life expectancy of an SSD dependent on the ability of the memory to store the electrical signal, and this can be for a longer time.

SSD’s are easily available in various form factors like 1.8”, 2.5” and 3.5”. Thus, this helps to replace the hard disk drive in any of the servers with ease. You can choose the form factor that best fits into your server and meets your business needs. 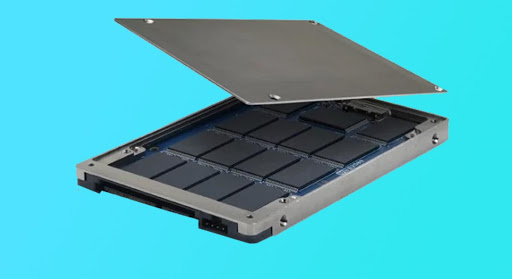 When data is transmitted from one device to another, many issues may arise. There might be noise interference, signal attenuation, and many such things.

End-to-End data protection makes sure that the retrieved and accessed data are correct. It also ensures that there is no error during data storage.

SSD contains a controller that is responsible for communication between the host system and the SSD. No matter, which communication protocol you are using the data is written and read through this SSD controller only.

HDDs mechanical parts need more energy to move. While a very tiny amount of electric current shuttle through the memory cells of SSDs. In case of HDD, a huge amount of heat is built up due to moving mechanical parts. A big data center requires several servers, with that they require a huge quantity of storage drives.

If HDD is used, then hundreds of spinning drives generate a huge quantity of heat, which in turn requires a large investment in cooling systems. In case of SSD, the heat generated is less and so there is less requirement of the cooling system and thus less energy usage.

Solid-state drives are much easier to install on the servers. Every SSD manufacturer provides the installation guide with the product. SSDs can be easily installed even if you don’t have much technical knowledge.

The Solid State drive is an advanced solution for Servers and it is slowly being preferred by many people over the majority of traditional hard disk drives. SSD has higher access speed which means businesses can run the programs can run more quickly when compared to HDDS.

Upgrading the Server with SSDS is very essential especially if you deal with the applications that access large amounts of data.

As SSD provides more reliability and performance than HDD, It is good to upgrade your Server with SSD if you are not worried about its heavy price tag.