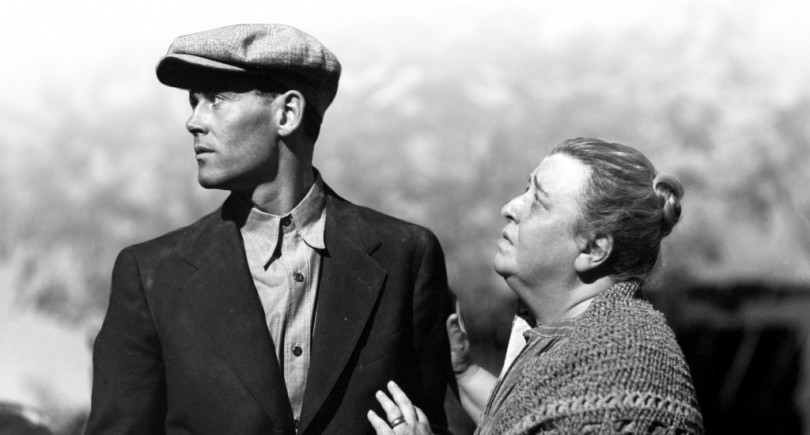 The Joad clan, introduced to the world in John Steinbeck’s iconic novel, is looking for a better life in California. After their drought-ridden farm is seized by the bank, the family – led by just-paroled son Tom – loads up a truck and heads West.

On the road, beset by hardships, the Joads meet dozens of other families making the same trek and holding onto the same dream. Once in California, however, the Joads soon realize that the promised land isn’t quite what they hoped.

Watch Trailer Of Movie “The Grapes Of Wrath” Here

Movie Reviews: “The Grapes Of Wrath”

The word that comes in most handily for The Grapes of Wrath is magnificent. Movies will probably go on improving and broadening themselves; but in any event, The Grapes of Wrath is the most mature picture story that has ever been made, in feeling, in purpose, and in the use of the medium. You can drag out classics (it is often safer not to go back and see them) and you can roll off names in different tongues and times. But this is a best that has no very near comparison to date.

I still don’t know how they did it, though its possibility has been latent in Hollywood for years. The story of the Joad family, with its implied story of a migration of thousands of families, is told straight, and told with the sternest care for cause and effect and the condition of society.

Not only does Nunnally Johnson’s adaptation (he is also assistant producer) refuse any compromise with prettiness or the usual romantic—it actually has the good taste to leave out some incidental fireworks that Mr. Steinbeck didn’t.

The Grapes of Wrath (20th Century-Fox). It will be a red rag to bull-mad Californians who may or may not boycott it. Others, who were merely annoyed at the exaggerations, propaganda and phony pathos of John Steinbeck’s best selling novel, may just stay away.

Pinkos who did not bat an eye when the Soviet Government exterminated 3,000,000 peasants by famine, will go for a good cry over the hardships of the Okies. But people who go to pictures for the sake of seeing pictures will see a great one. For The Grapes of Wrath.

Many parts of the US suffered during the Great Depression, but in Oklahoma, whose economic sustainability had been touch and go for decades, it coincided with a drought. With the local oil industry disrupted as well, over a third of the state’s population became unemployed, and the excess of labour, in the absence of effective regulation, meant employers could get away with offering less that subsistence level pay to those who still had jobs. It was this crisis that prompted John Steinbeck to write The Grapes Of Wrath, and a year later it was adapted for the big screen.

The first thing to note about this adaptation is that it is considerably more optimistic than the book. Its latter stages have been reworked to put the focus on survival and the triumph of the human spirit, though all Ma Joad’s defiance cannot elide the fact that a lot of the characters we’ve met along the way have died.

Steinbeck’s more overt political point-making has also been removed (with the exception of a discussion about pay by striking fruit pickers), but this has the beneficial effect of slimming down the narrative, something which, as it’s still over two hours long, is to be welcomed. It’s also something which has become less problematic as the film has aged – viewers now no longer need to have no much explained to them.